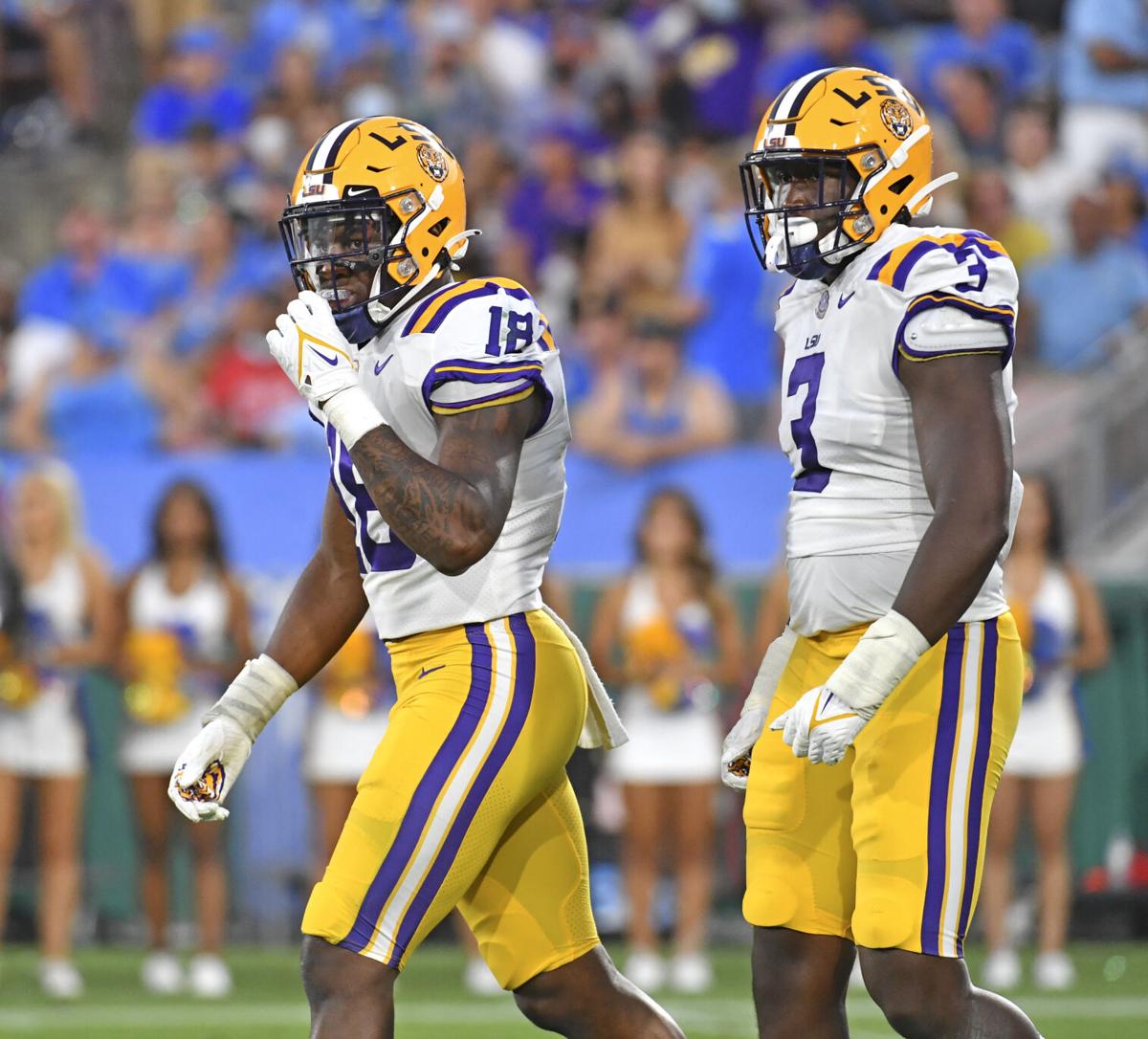 LSU linebackers Damone Clark (18) and Andre Anthony (3) on the field in the first half against UCLA, Saturday, September 4, 2021, at the Rose Bowl in Pasadena, Calif. 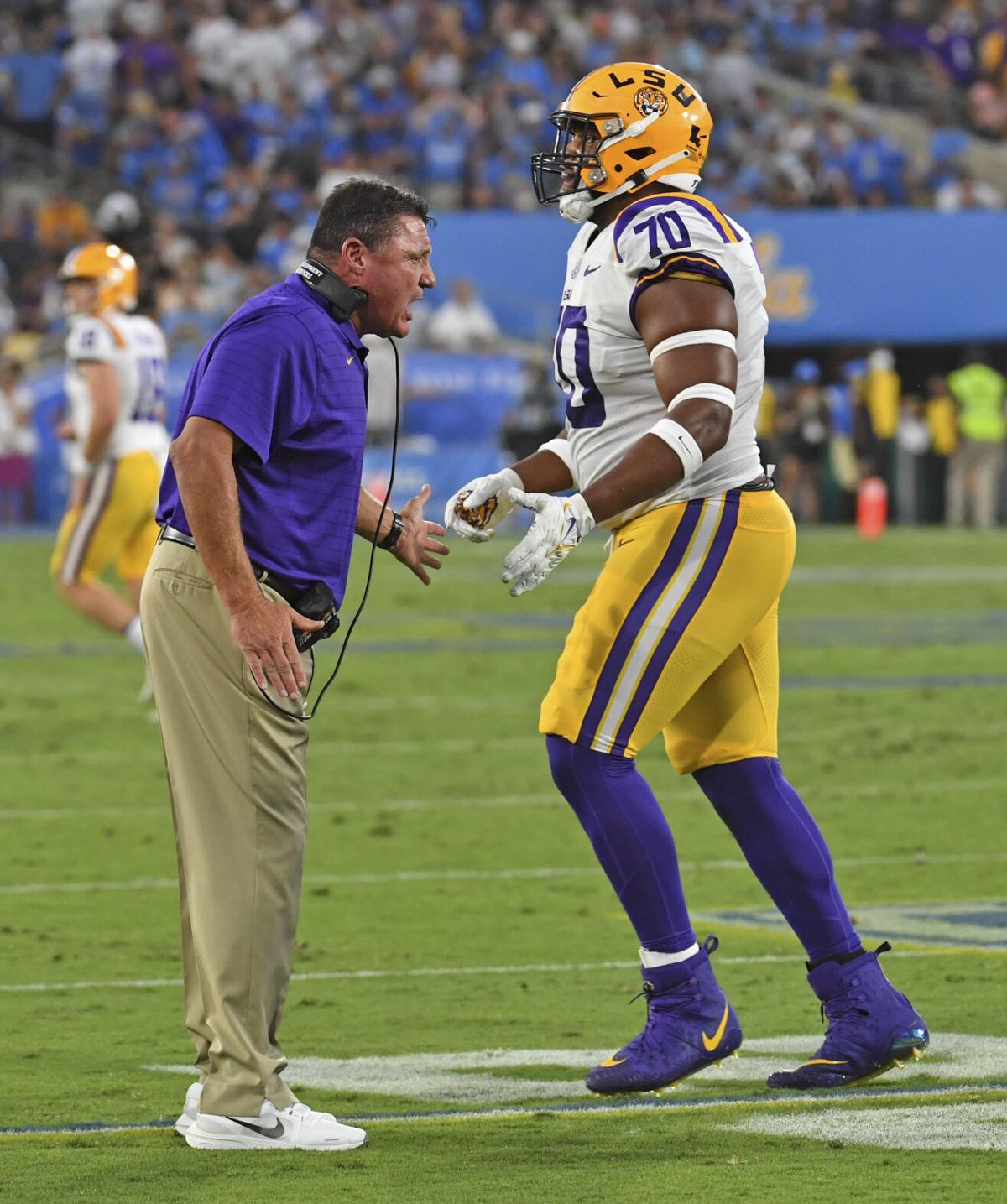 LSU coach Ed Orgeron greets guard Ed Ingram (70) as he comes off the field in the first half against UCLA, Saturday, September 4, 2021, at the Rose Bowl in Pasadena, Calif.

LSU linebackers Damone Clark (18) and Andre Anthony (3) on the field in the first half against UCLA, Saturday, September 4, 2021, at the Rose Bowl in Pasadena, Calif.

LSU coach Ed Orgeron greets guard Ed Ingram (70) as he comes off the field in the first half against UCLA, Saturday, September 4, 2021, at the Rose Bowl in Pasadena, Calif.

The world outside of the LSU football program is losing its mind in the wake of the Tigers’ 38-27 loss Saturday at UCLA.

Outside the football complex’s walls and fences it’s all, to quote a staple from the old “Hee Haw” TV show, “deep dark depression, excessive misery.”

That core meltdown isn’t going to be helped any by the candid remarks of LSU guard Ed Ingram. Ingram is one of the Tigers’ offensive linemen whose performance, or lack of it, was a major culprit in LSU’s loss to the Bruins. Those guys in the “sissy blue shirts” pushed the Tigers’ O-line around, keeping quarterback Max Johnson under maximum pressure all night while stuffing the LSU running game into a box with a note that read “do not open … ever.”

“There were a lot of mental errors we had during the game,” Ingram said. “There were times we didn’t know what to do or how to block the right person. We also have to help out the quarterback with the protection calls when we know it should be turned.”

Asked if a rash of preseason injuries impacted the Tigers’ ability to block and blow holes in the UCLA defensive line, Ingram said: “It could have played some part in it. I don’t think it played a direct part in it. At the end of the day, we’ve got to move the ball, get our double teams together and focus on our technique. I think a lot of us were tired and out of shape.”

Tired and out of shape. Alarm bells are ringing all over this fruited plain wherever LSU fans reside right about now. Then this from center Liam Shanahan:

Running back Tre Bradford returns to LSU after transferring to Oklahoma

These are dire comments and dire-sounding times for LSU football. It would be even more dire were it not for the fact that the Tigers are hosting McNeese State on Saturday in Tiger Stadium. If there’s anybody LSU can beat on this year’s schedule (the Cowboys fell to Division II West Florida 42-36 on Saturday) it’s Saturday’s opponent.

It had better be.

After that, it’s hard to figure LSU can improve things to the point where the Tigers turn down the heat on Orgeron’s now scorching hot seat. Still, before folks start showing up at the gates of the LSU football complex with pitchforks and torches, it’s worth knowing this:

The Tigers don’t sound like they’re panicking. At least not the way the did after last year’s shocking 44-34 season-opening loss to Mississippi State, when shock and aw-ful led to finger pointing and opt outs.

“It’s a very different energy from last year,” Ingram said. “After we lost to Mississippi State, a lot of us kind of turned on each other. You could tell. This year everybody’s holding each other saying, ‘We’ve got you, stay according to plan, trust the process.’ We’re going to get it fixed this next week.”

That process started in the Rose Bowl locker room immediately after the game. Senior linebacker Damone Clark, one of the two players along with kicker Avery Atkins respected enough to wear the No. 18 jersey this year, gathered the team around him.

“He brought everybody up,” linebacker/end Andre Anthony said. “He said, it’s the first game, we’ve got a lot of ball ahead of us. It’s no reason to hang our heads or be mad. We just need to focus on winning these next 11.”

To those not wearing a No. 18 jersey that sounds like an impossible task considering the rugged mountain range of teams still on LSU’s horizon: Alabama, Texas A&M, Florida, Ole Miss. Auburn, Mississippi State and Kentucky won’t be easy pickings, either.

Maybe it’s the unbridled, naïve optimism of youth talking when LSU players speak of winning out after the way they couldn’t block and couldn’t staunch the defensive busts Saturday. But who will believe in these Tigers if they don’t believe in themselves?

Anthony threw down the gauntlet to the challenges that lie ahead. It wasn’t Tim Tebow’s tearful “Promise” speech from 2008, but his words were bold and admirable in their own right.

“Just knowing what we went through last year, we don’t want that to happen again,” he said. “Now people are upset, sad, we don’t need that.

“This year is not going to be another last year. That’s not going to happen. We need to stay together as a team for one. We can win out, ball out and learn from our mistakes.”

Heading to the LSU game? Here's how to prove vaccine status for quick entry to Tiger Stadium

It could be the most meaningful moment of the 2021 season for LSU. It could prove to be a pipe dream. Personally, I think the way the Tigers looked Saturday, getting above 6-6 will be a struggle.

But if LSU players have truly looked in the mirror, owned up to their mistakes and are committed to being better, maybe there is a chance.

Believing may well be half the battle.

Tre Bradford welcomed back to LSU, but running back hasn't received game clearance yet