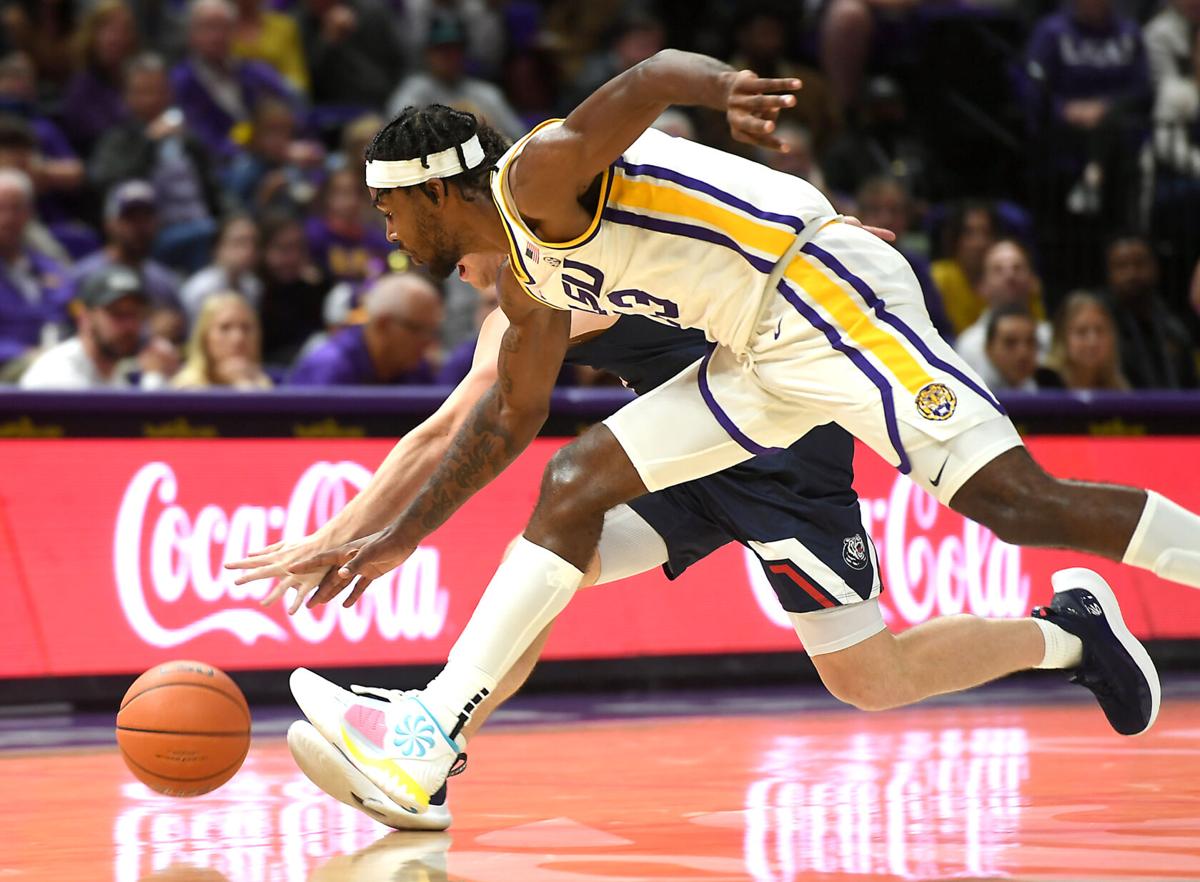 LSU’s Tari Eason (13) steals the ball and goes on to score in the first half of LSU's game va Belmont Monday in LSU's Pete Maravich Assembly Center. 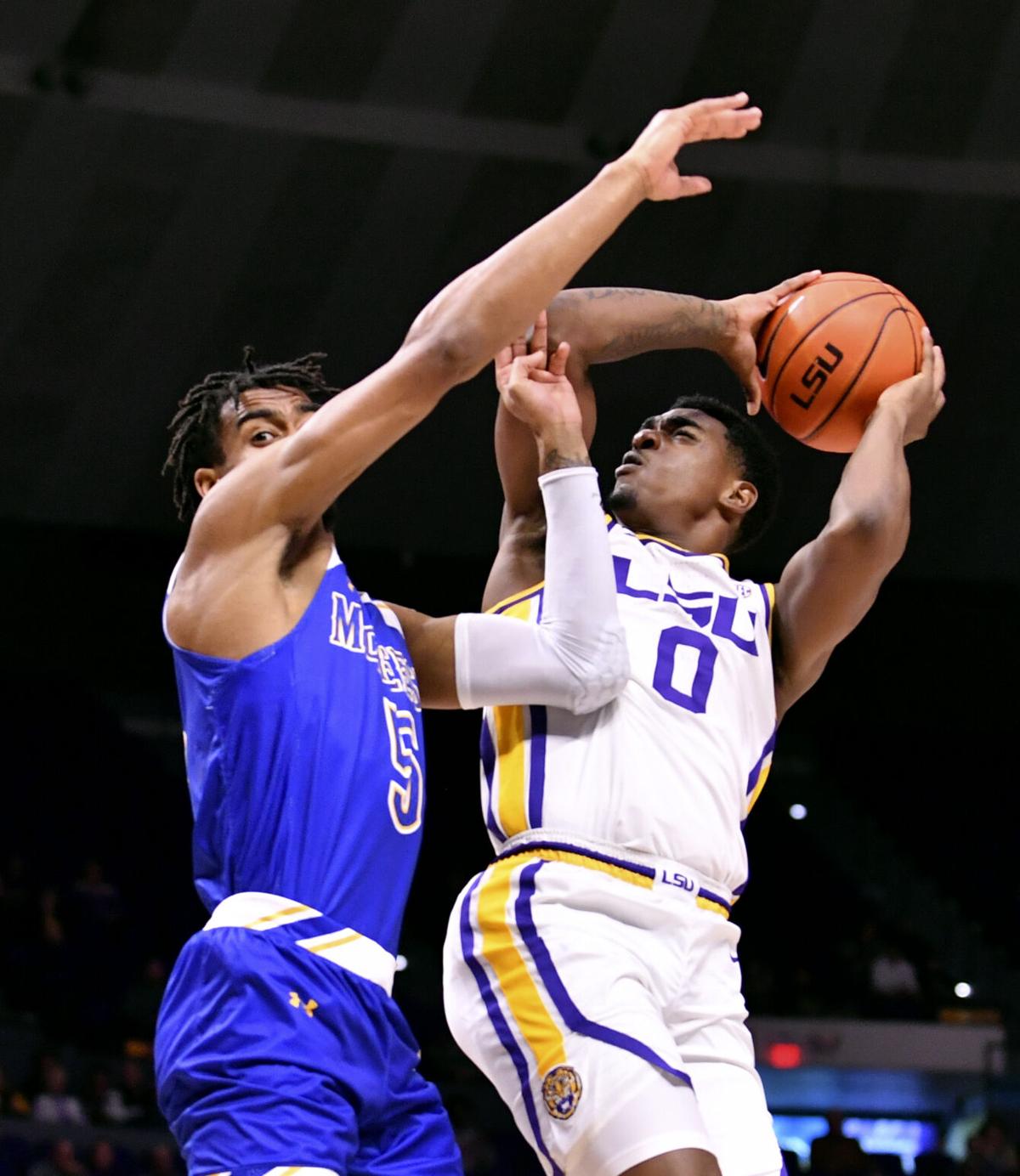 LSU guard Brandon Murray (0) drives to the basket past McNeese forward Myles Lewis (5), Thursday, November 18, 2021, at the PMAC on the campus of LSU in Baton Rouge, La.

LSU’s Tari Eason (13) steals the ball and goes on to score in the first half of LSU's game va Belmont Monday in LSU's Pete Maravich Assembly Center.

LSU guard Brandon Murray (0) drives to the basket past McNeese forward Myles Lewis (5), Thursday, November 18, 2021, at the PMAC on the campus of LSU in Baton Rouge, La.

The reigning Southeastern Conference player of the week didn’t have the best of nights for the LSU basketball team Monday night.

Six hours after being honored by the league for his play in LSU’s two victories last week, Darius Days had a rough night in the Tigers’ nonconference matchup with Belmont in the Pete Maravich Assembly Center.

Days took a hard shot to the face in the first half and was on the receiving end of an intentional foul in the second half when his right arm was hooked by a defender on his way to the basket.

Even though Days made just one field goal and scored nine points — more than 12 fewer than his SEC-leading average of 21.8 points — LSU had more than enough firepower to crush Belmont 83-53.

The Tigers kept their opponent under 60 points for the fifth consecutive game. It’s the first time they’ve held their first five foes below 60 points since the start of the 1946-47 campaign.

LSU (5-0) closed out its season-opening five-game home stand in style despite Days’ 1-of-6 shooting — 1 of 4 from beyond the arc — when forward Tari Eason, guards Xavier Pinson and Brandon Murray, and center Efton Reid picked up the slack.

Eason came off the bench to lead the way with 17 points, while Pinson had 14 and Murray 13. Reid added 12 points to give the Tigers four double-digit scorers for the fourth time in five games.

Pinson, Eason and Reid came up big in the first half to help LSU rebound after Belmont (3-2) scored the first seven points of the contest.

The Bruins came out with back-to-back 3-point baskets by Will Richard before the Tigers really knew what hit them.

LSU clawed back to take an 11-9 lead after a dunk by Reid before Pinson hit two 3s and went on to score 10 of his team’s next 14 points.

“Great win, great effort by our guys,” LSU coach Will Wade said. “We got off to a little bit of a slow start, our offense was a little clanky to start the game. But I was really proud of the guys; their urgency, their discipline.”

Pinson’s scoring burst helped stretch the Tigers’ advantage to 25-11 with 7:50 to play in the first half, and they never looked back.

“You can’t expect to just go up right away,” said Pinson, a Missouri transfer whose 14 points were his high in an LSU uniform. “So, as the game starts and you don’t go up and they start a run, you just have to be ready for it, honestly.

Thanks to some sticky full-court pressure, the Tigers led 36-23 at halftime and continued to pour it on in the second half. They built their largest lead of 39 points with an 81-42 advantage with 4:25 remaining.

Belmont had just two players in double figures. Richard finished with 16 points and Ben Sheppard had 14 as the Bruins shot just 32.3% from the field.

“They’re a really good offensive team,” Wade said of Belmont, which came into the game shooting 50.6% in their first four games. “They’re top-25, top-30 offense in the country. I thought we did a really nice job swarming the ball, blocking shots.”

Wade said the key to the game was winning in the paint area, which LSU did 50-21.

“Their 3s get a lot of notoriety, but they just bludgeon you in the paint,” he said.

The Tigers had a huge advantage on the backboards as well. Reid led LSU to a 42-31 edge on the glass with nine rebounds, while Days and Eason had seven each.

The Tigers were active on the defensive end with 15 steals, five by Mwani Wilkinson, and had seven blocked shots. It was the fourth time this season they've had at least 14 steals.

“I liked that we were just everywhere … we were aggressive,” Eason said of his team’s defensive performance. “We attacked the ball, we did all the little things. We were aggressive, and we executed our game plan really well.”

LSU will next play at 6 p.m. Friday against Penn State in the Emerald Coast Classic in Niceville, Florida. The Tigers also will play Saturday against Wake Forest or Oregon State.