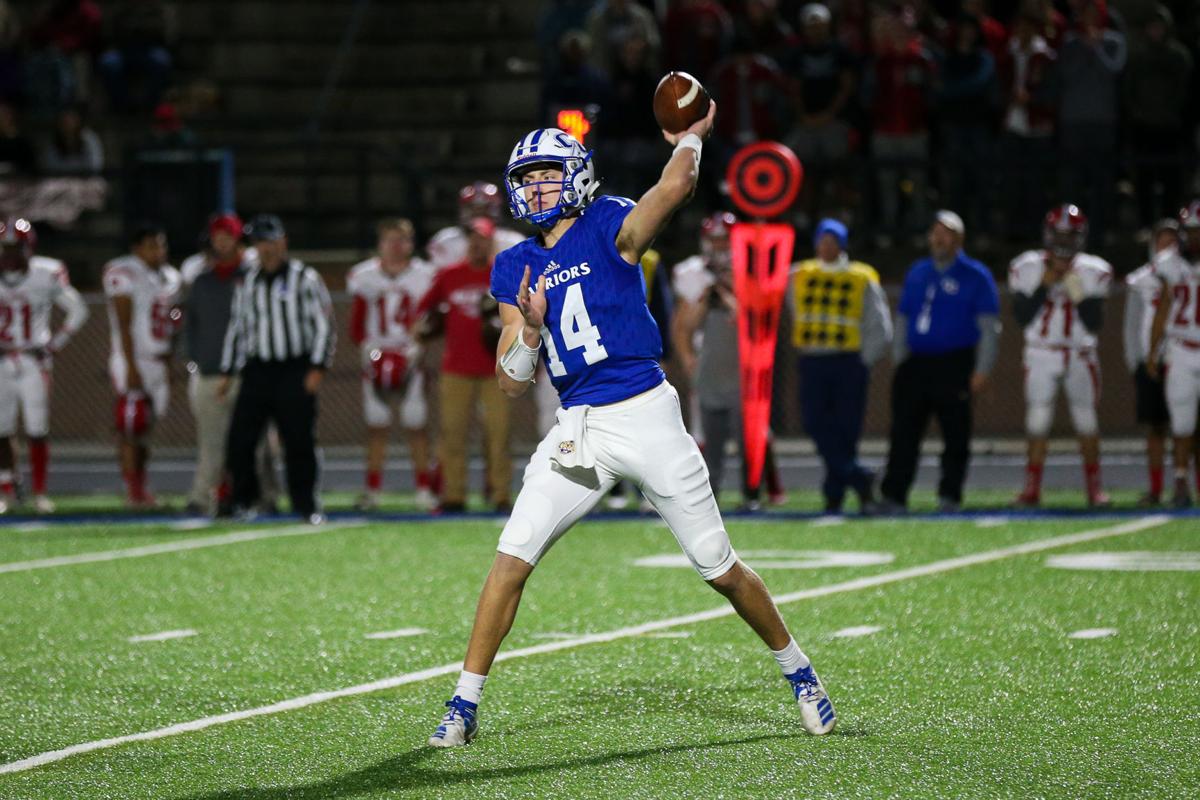 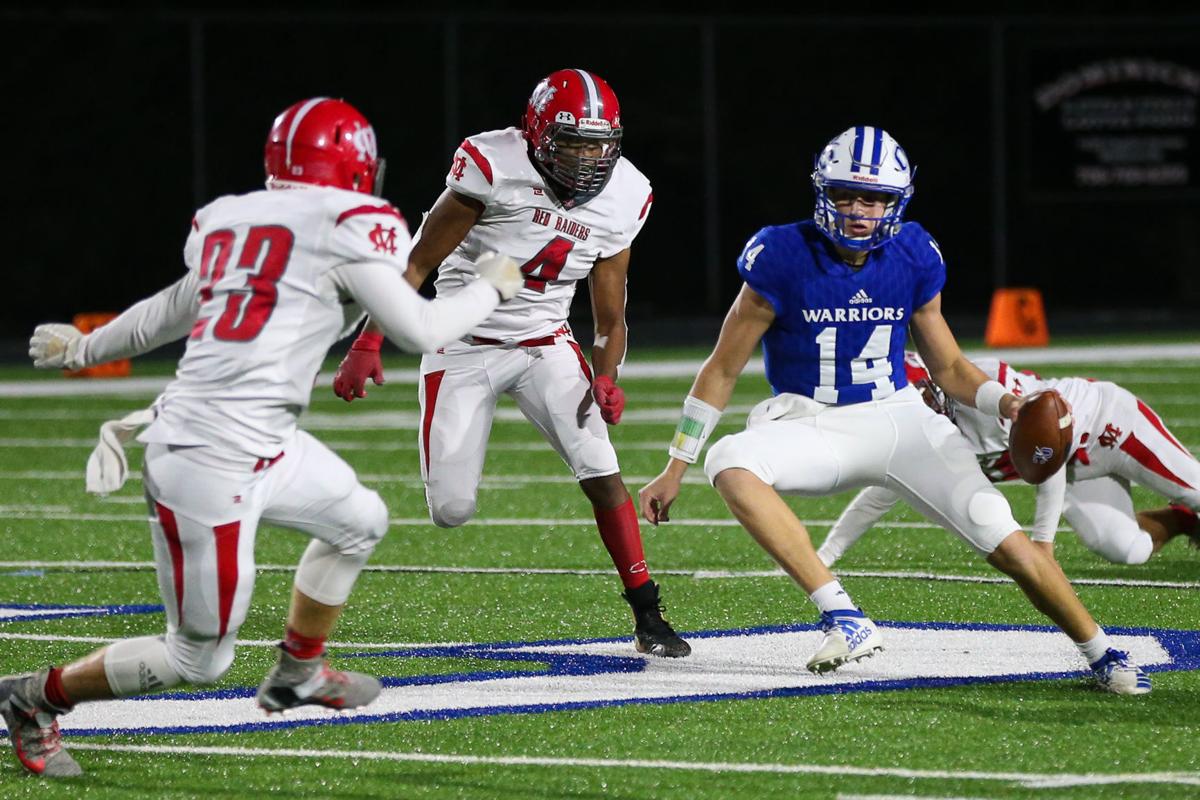 WATKINSVILLE, Ga. — Max Johnson’s feet rested near the goal line during a recent practice at Oconee County. His younger brother stood 30 yards away after running a corner route. Between them, their father, Brad, coached both players. He instructed Johnson to flatten the arc on his next pass.

Johnson repeated the throw, and the ball dropped into the hands of his brother, Jake.

“That was good,” Brad said. “I think you can put it a little bit higher.”

Johnson dropped back and lofted another pass toward the sideline. His brother, a tight end, caught it with ease.

“Good,” Brad said, and he raised one thumb, ending the drill.

Johnson and his father walked behind a line of players. They threw back and forth while Oconee County’s defense practiced against the scout team. The Georgia 4A state championship game loomed in four days, and Brad explained different styles of throws for different routes.

One week later, Johnson signed with LSU, finalizing a commitment made in part because no one in his family went there.

Johnson’s father played football and basketball at Florida State, then completed 17 years in the NFL. He won Super Bowl 37 as the starting quarterback of the Tampa Bay Buccaneers. Pictures from Brad’s career cover the walls of their workout room at home.

“It's cool growing up with them, but it's also normal,” Johnson said. “They're just my uncle and just my dad.”

As Johnson neared his college decision last November, he considered Florida State, Miami, Georgia, Wisconsin and LSU. He picked LSU, doing so long before the team reached the top seed in the College Football Playoff.

Quarterbacks TJ Finley and Max Johnson signed with LSU on Wednesday, but they committed long before its ascension within college football. Everything that happened this fall existed for them as a reassuring bonus.

Johnson chose LSU because he felt comfortable there. He trusted coach Ed Orgeron’s vision, and he connected with offensive coordinator Steve Ensminger. He liked the atmosphere around campus. He enjoyed Louisiana. Johnson and his family believed he fit LSU’s system, and they liked the talent at the skill positions.

And though Johnson’s father helped him become a four-star recruit by teaching him the position, LSU gave Johnson a place he could make his own. He will enroll in January and begin pushing junior Myles Brennan for playing time as LSU replaces Joe Burrow.

Growing up in a football family, Johnson began playing the sport in first grade. He spent time at linebacker, but he settled at quarterback, just like his father and his uncle, who’s related through Johnson’s mom.

Brad started coaching his son in third grade. He noticed the ball popped out of Johnson’s left hand, and one year later, Johnson completed three-, five- and seven-step dropbacks. He executed play fakes and waggles.

“That came really natural to him,” Brad said. “His feet and accuracy are really special.”

Brad continued to coach his son. He considered it a blessing. He had retired when Max was 6 years old. They watched games together and threw in the backyard, but Johnson never saw much of his father’s NFL career.

They began film sessions in eighth grade, once it became clear Johnson might have the talent to play college football. Johnson learned how to read coverages and defensive fronts on a board in the Oconee County fieldhouse. His dad taught him pressure comes playing the most important position on the field.

Their father-son relationship blended with coach and player dynamics, but Brad tried to separate the roles. The sessions became more serious, and sometimes heated, when Johnson reached high school. They spent about three nights a week during the seasons preparing for games.

Ed Orgeron received the 2019 Eddie Robinson Coach of the Year Award on Friday afternoon, giving him four coach of the year honors this season.

“I tried to keep it light with him where it wasn't all football all the time,” Brad said, “but obviously, it comes up a lot.”

Oconee County hired Brad as its quarterbacks coach, allowing him to remain near his son, and Johnson started by his sophomore year. His father helped him understand protections, game management and leadership in the huddle.

Over time, Johnson became more confident in what he saw on the field. He collaborated with his father more during his final two seasons, and Johnson became the No. 10 pro-style quarterback in the country, according to 247Sports. He took on more responsibility.

But Oconee County, which has not won a state championship since 1999, struggled. It lost its top seven receivers because of injuries during Johnson’s junior season. Other schools, including ones from outside the state, asked if Johnson wanted to transfer before his senior year. Johnson said no.

“I'm staying with my team,” Johnson told his mother, Nikki. “I'm not going to leave my guys.”

Johnson’s loyalty paid off. He played alongside his brother throughout the season while his dad coached, and Oconee County won its region. The team finished 13-2, its greatest season in at least 15 years.

Before the state championship, which Oconee County lost by three points, Johnson’s mother sat inside Georgia State Stadium watching him warm up for his final high school game. The way he walked, his mannerisms and the towel hanging from his waistband looked like Brad.

Johnson’s mother had seen him play throughout his career, but something about his movements that day resembled his father. She described them both as quiet leaders who will outwork anybody. But Johnson is not his father, and that’s part of the reason he will play at LSU.

Johnson grew up attending his uncle’s games and meeting his father’s former teammates. He went to Georgia bowl games. He visited stadiums throughout the country. Memorabilia helped decorate the house.

The lifestyle felt normal, but like every other incoming freshman, Johnson will now have to learn how to wash his clothes, find his classes and connect with his peers.

His father has helped him reach this level as a quarterback, but when Johnson arrives at LSU, his father hopes Johnson can figure out life for himself. It will present a transition for Brad, too.

“He absolutely loved (coaching Max),” Johnson’s mother said. “I think it's going to be hard on him now that he's going.”

Johnson feels ready. As he changed before every high school game, he took off a necklace. He wore it every day for two years, only removing it for games.

The necklace had a key dangling from a chain, and the word “Courage” was carved into the metal. He raised it over his head and placed it on a hook inside his locker. It reminded him to play with courage, cherish every moment and take advantage of opportunities.

The tradition of the Southeastern Conference's top football gamed being played at 2:30 p.m. Saturdays on CBS is reportedly coming to a close.