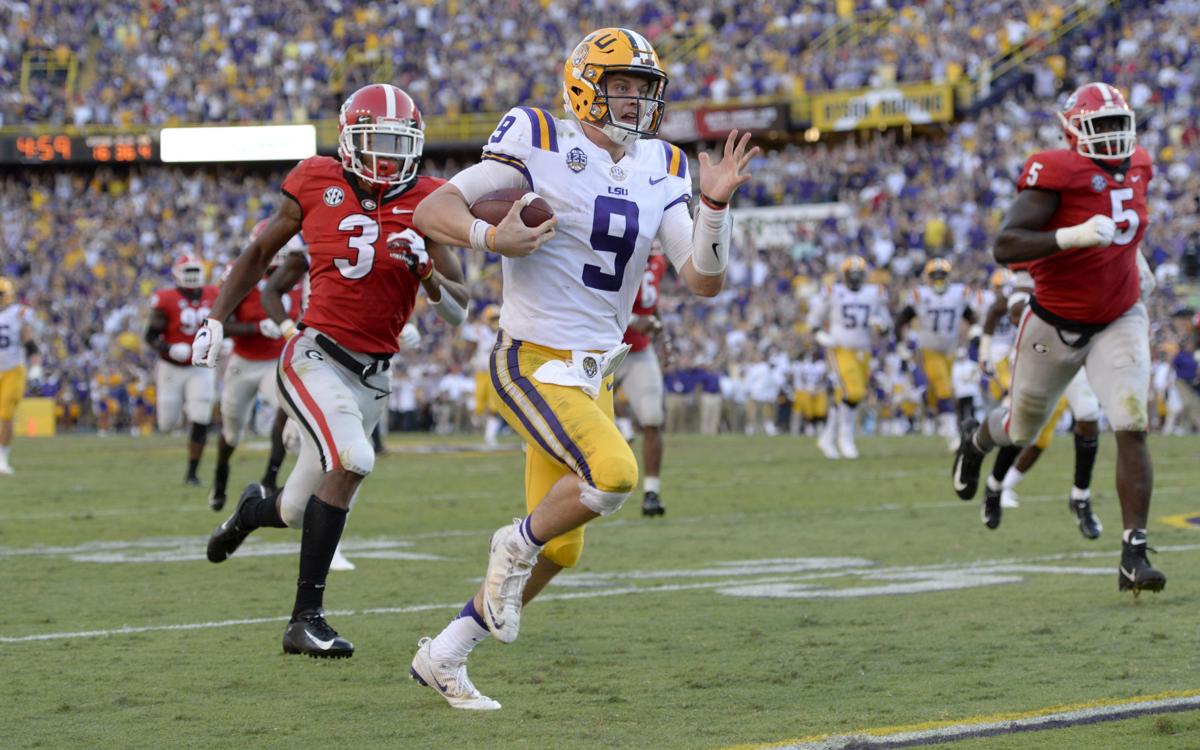 LSU quarterback Joe Burrow (9) runs the ball 59 yards to keep the drive alive as the Georgia defense gives chase during the second half of LSU's game against Georgia in Tiger Stadium Saturiday Oct. 13, 2018, in Baton Rouge, La. LSU won 36-16. 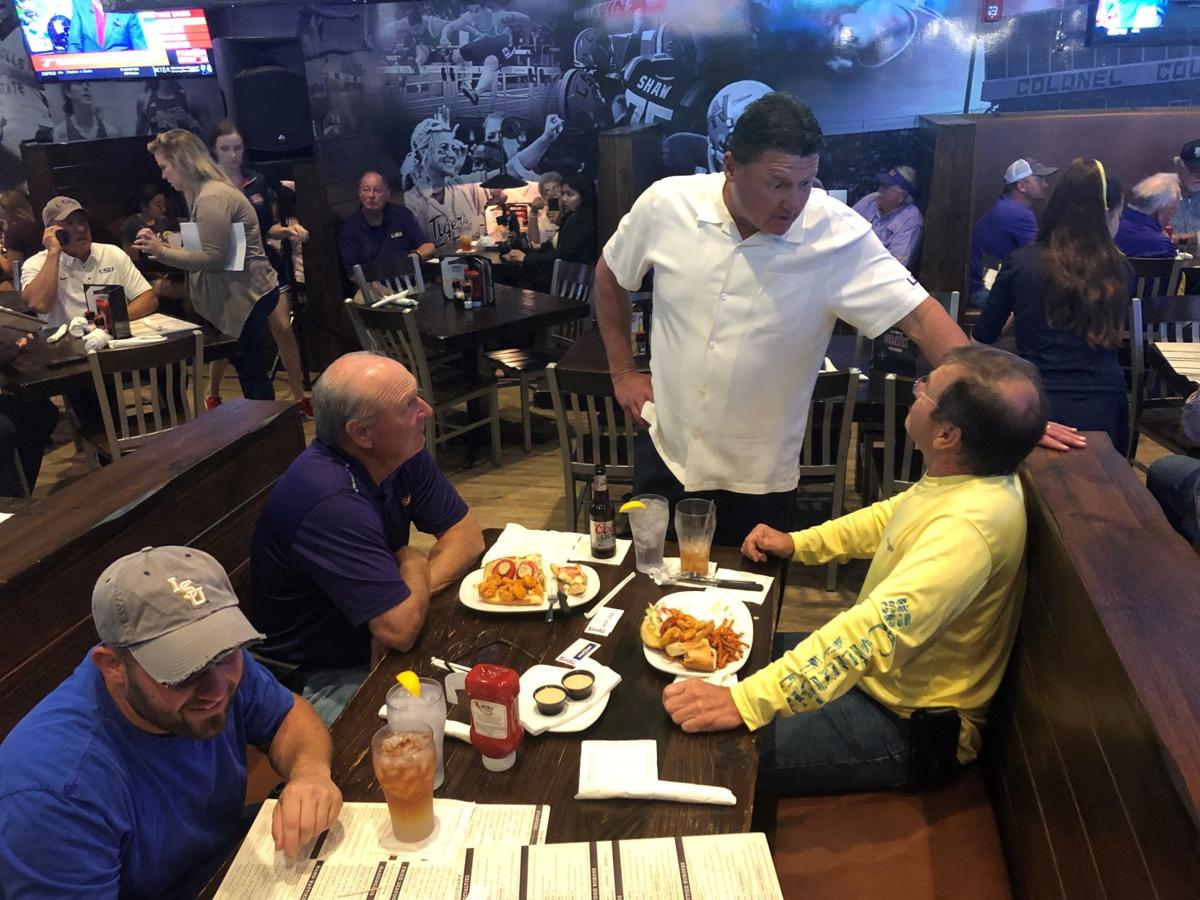 LSU head coach Ed Orgeron talks to patrons at Walk-On's in Houma on the LSU Coaches Caravan on May 13, 2019.

HOUMA — Before the offseason began, LSU quarterback Joe Burrow told his strength coach that he wanted to bulk up.

The 6-foot-4, 216-pound graduate transfer found that he loses weight during the course of the football season, and he wanted to be certain that he'd be full and sturdy for his second and final season in Baton Rouge.

'You Can Do It': The family phrase that motivates LSU's Cole Tracy in his football career

Once the camera lights and tape recorders clicked off and pulled away from Cole Tracy, a tee…

Burrow, who started all 13 games for the Tigers in 2018, had never played in more than five college games in any of his three previous seasons at Ohio State.

And Burrow took every offensive snap until Week 11, when backup Myles Brennan had fully returned from what Orgeron called a minor injury that was hampering his ability to throw.

So far, Moffitt said, Burrow has been limited on bulking up because of an arm injury that, though it didn't prevent him from participating in spring practice, kept him from working out fully.

"We're having to play catch-up right now," Moffitt said. "Prior to him leaving, he was training twice a day."

How much heavier does Burrow want to get?

"We'll leave that between Joe and I," Moffitt said. "But he's going to come in heavier."

The new workout regimen has little, if nothing to do, with Orgeron's desire to run his quarterback more often during the 2019 season.

The fourth-year head coach has said often that he wants to use Burrow's running ability more — he rushed for 399 yards and seven touchdowns in 2018 — but Orgeron doesn't want Burrow to becoming too big.

Houma was the third stop in the LSU Coaches Caravan, which stopped in Shreveport and West Monroe last week.

Table to table, Orgeron asked each person where they went to high school and he recognized the names.

Orgeron was about 30 miles southeast of his hometown of Larose.

This is where the south Louisiana native is more known by his nickname, Bébé, the nickname and common Cajun term of endearment handed down from his late father.

"It's home," said Orgeron, a South Lafourche graduate who helped the Tarpons upset Bonnabel for the 1977 state championship. "I feel like I'm coming to visit instead of working. I haven't been here in a while."

LAROSE — A wooden sign rested against a pillar in the Larose Civic Center pavilion, nestled …

One of the last official events Orgeron attended down here was in February 2017, when a few thousand people threw a "Coach O Day Banquet" in Larose to celebrate his hiring as LSU's permanent head coach.

Sure, there was plenty of food and drink on that day, but that was an uncertain time for LSU football. The overall mood surrounding the program has changed drastically since.

WEST MONROE — Ed Orgeron made it clear who will be calling plays for LSU in 2019, but he is …

Now, the Tigers face a promising 2019, coming off their first 10-win season since 2013 and their first New Year's Six bowl victory in the College Football Playoff era.

LSU made that rise with the toughest schedule in college football, according to SBNation's S&P+ rankings — and the Tigers' 2019 recruiting class, which includes three five-star players, ranked fifth nationally according to 247Sports.

Does Orgeron notice a difference when he interacts with folks back home?

The 57-year-old Cajun raised his hands with a smile, a signal that almost said: Are you kidding?

"There's a good feeling there about LSU," said Orgeron, who owns a 25-9 record with the Tigers and just received a two-year, $4 million contract extension through 2021. "I learned the importance of having a good season and winning the bowl game. It affects everything. It affects recruiting. It affects the fan base."

This trip down the bayou didn't include a visit home, Orgeron said, and even then, he found out Sunday that his mother, Coco, was out of town.

LSU's 2020 recruiting class, which ranks No. 2 nationally per 247Sports, has one player, No. 3 WR Rakim Jarrett, who is from Washington.

Could it be that Coco is on the road recruiting?

HOUMA — There was no question, hardly a hesitation, when Greg McMahon was asked about the chances that incoming place-kicker Cade York would p…

HOUMA — Ed Orgeron said he wants officials to be "fair" and "consistent" when it comes to implementing the NCAA's new targeting and overtime rules.

LSU football's new power play: How strength AND speed is giving a true measure of Tigers