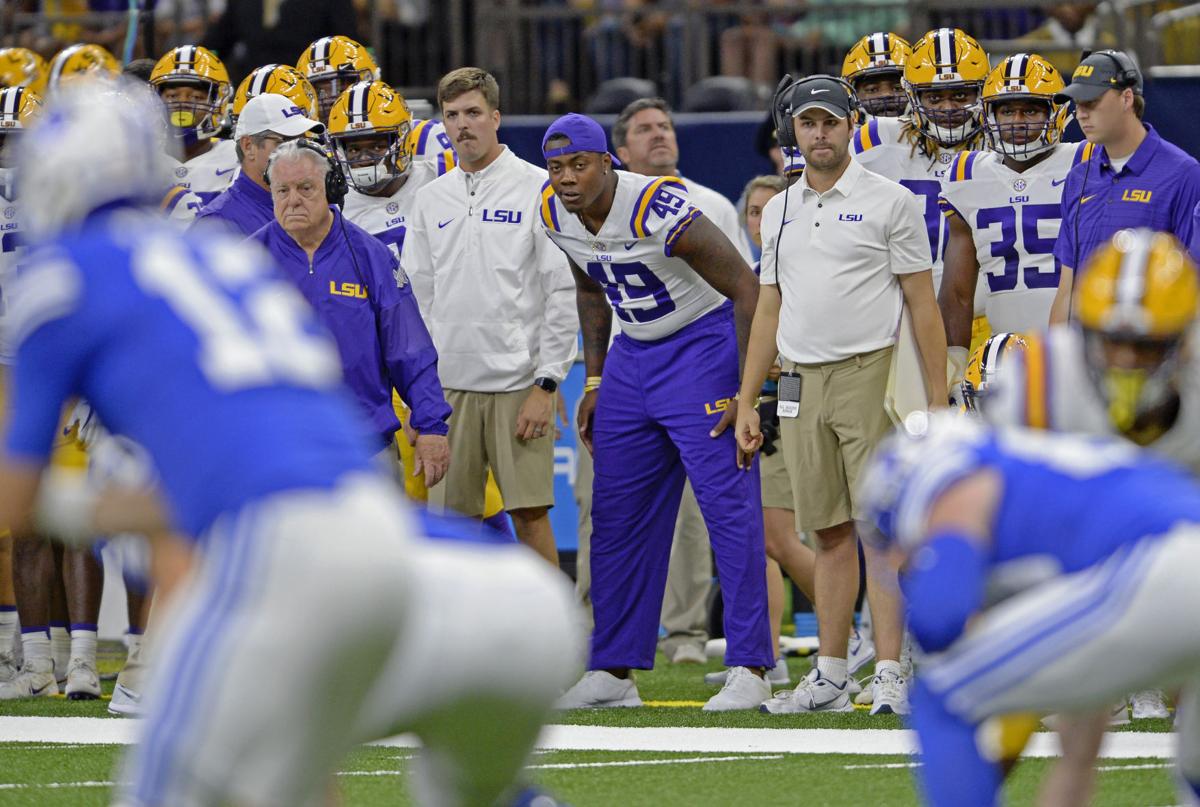 LSU linebacker Arden Key (49) watches from the sideline during the first half at LSU's football season opener against BYU. 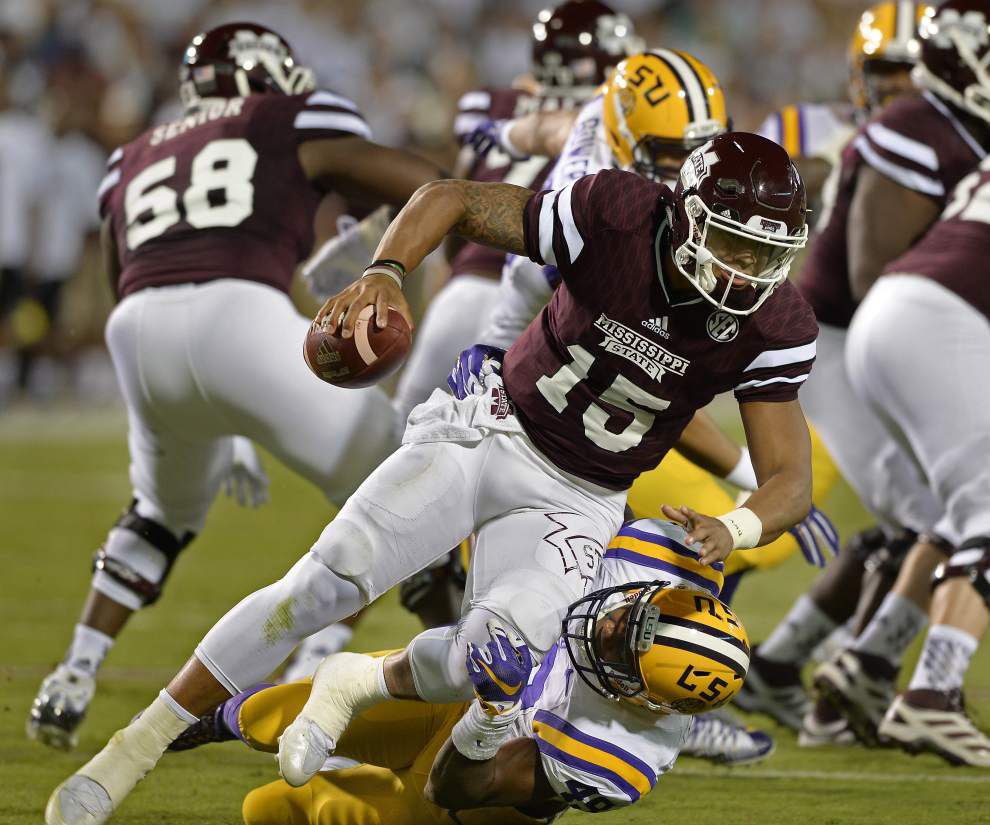 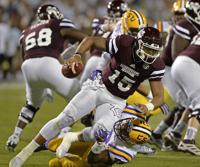 STARKVILLE, Miss. — Arden Key Sr. sees it as a sign from above.

That’s what he’s referring to it as — a rebirth. A rebirth of his son’s career, temporarily derailed this spring by undisclosed personal issues and this summer by recovery from shoulder surgery. A career that peaked last season with him setting the school’s single-season sack record is back on track, restarting with a familiar foe.

Arden Key Jr. recorded a sack on his first collegiate snap in the 2015 season opener in Starkville, Mississippi. He broke through State’s offensive line and mauled then-quarterback Dak Prescott, a loss of 9 yards that sent Key exploding into celebration.

The rebirth, as his father says, unfolds on the same field at the same stadium Saturday night when No. 12 LSU (2-0) and Mississippi State (2-0) tangle.

Arden Key Sr.’s son is much different than that college rookie who toppled Prescott on that September night. He’s a seasoned veteran now, a whopping 17 sacks on his rèsumè in two seasons. He’s a preseason All-American and a projected first-round NFL draft selection next year — a far cry from that signee in 2015 with just potential.

His biggest change took place this spring. He left the LSU football team — his own decision, his father said — for about four months, taking a leave of absence for what the school termed “personal reasons.”

The reasons remain a mystery. No one will comment on them publicly, something that’s led to speculation and rumor. Arden Key Sr. declined to specifically address them Friday. Key Jr. has been unavailable for interviews this fall.

“Let the past be the past,” Key Sr. said. “All those rumors are going to surface through his career. As a family, we had challenges and we worked through them, and we’re still working through them.”

His son’s issues evolved from his “instant success” in football, he said. It resulted in Arden Jr.’s life becoming unbalanced.

“It was time to take time away from football,” Key Sr. said. “He lost himself. He had so much success early. All the pressures of being a student-athlete. We forget he’s still a kid trying to balance life out. It was all coming down on him.”

His son spent his time away from football at home, Arden Key Sr. said, staying with his mother in Atlanta. He “reconnected” with the family, removing himself from that bright spotlight.

He’s a new man now, his father says, with a different approach on life and football.

“He’s changed tremendously,” he said. “He had to get his priorities together now. He sees life out of a different lens because he stepped away from football. He’s never been away from the game. By being away, he appreciates it even more.”

He almost lost the game, his father says.

“I never thought his football career was in jeopardy, but he needed to take time so it wouldn’t put his career in jeopardy,” his dad said.

Now, here he is, traveling with the team to north Mississippi for that rebirth.

“I LOVE THIS FEELING!!!” Key Jr. posted on his Twitter account Friday afternoon as the team departed Baton Rouge.

Key will start Saturday night, but he’s not in game shape to play each snap, Orgeron said earlier this week. Key will rotate with true freshman K’Lavon Chaisson at defensive coordinator Dave Aranda’s hybrid edge-rushing position. The two players will likely share the field on some plays, playing together on each side of the line on pass-rushing downs.

Outside linebacker Corey Thomson could see time, too, in a third-down role. He already has 3½ sacks this season. Could LSU play all three? Potentially.

“If Coach Aranda can dial something up to get them all out there at the same time, it’ll be hard for any offensive line to block,” inside linebacker Devin White said. “They’re all fast and can get to the quarterback. We’ll just have to see.”

White is excited about the ripple down effect of having Key on the field.

“Most teams, if you’ve got Arden Key, you’re going to slide out and try to protect him first because he’s the No. 1 threat,” White said. “He helps us get tackles.”

Key’s game has evolved over this offseason, his father said.

He’s quicker now off the line of scrimmage, Key Sr. said, and his added pounds will allow him to have more success in “bull rushing.” It’s a matter now of “getting in game shape,” Key Sr. said. Coaches want Key to lose about 5-10 pounds and get down closer to 255.

As for his shoulder, Key’s surgery in May was to repair a labrum, at least partially torn, in his rotator cuff. The labrum is the cup-shaped rim of cartilage that lines and reinforces the ball and socket joint of the shoulder. It’s a common injury and one at least two LSU starters have undergone surgeries to mend: center Will Clapp and inside linebacker Donnie Alexander.

The root of the injury is a stinger he suffered in practice last fall, Key Sr. said. He reinjured the shoulder against Florida last November.

The shoulder was healthy enough for doctors to clear him this week — against the same opponent in which his career began. The rebirth is set to start at 6:05 p.m. Saturday.

Pregame primer: All the storylines ahead of LSU-Mississippi State showdown

Here are all of the key storylines as LSU and Mississippi State both open up their SEC schedules in Starkville.