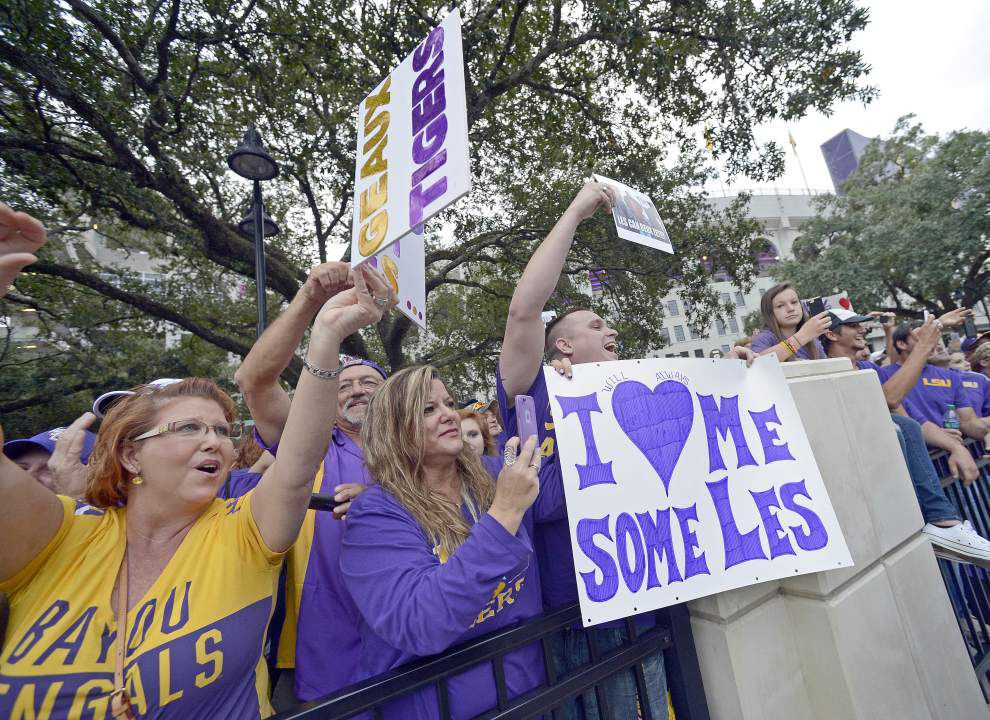 Advocate staff photo by BILL FEIG -- LSU fans get to meet the Tigers on Aug. 14. 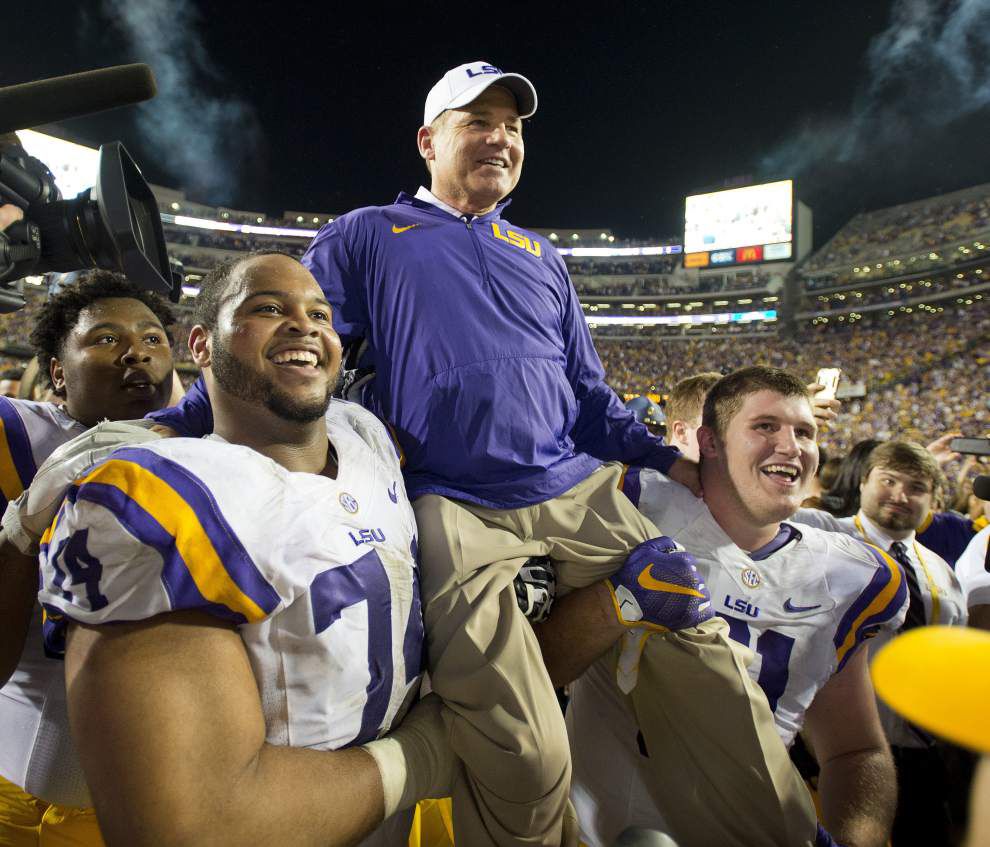 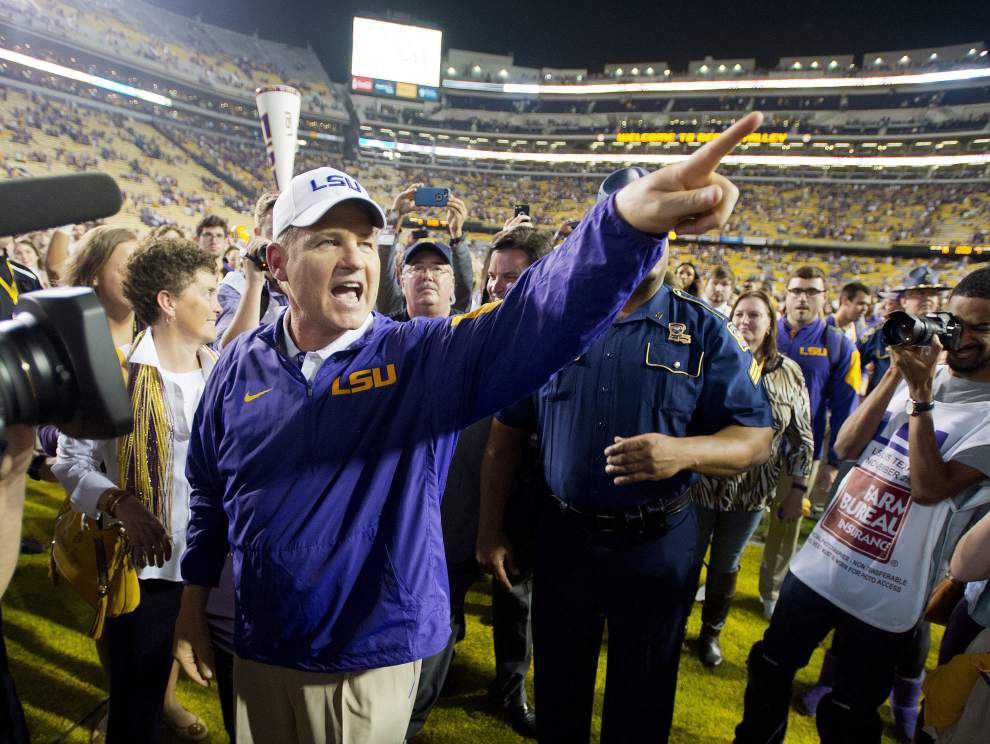 Advocate staff photo by TRAVIS SPRADLING -- iLSU head coach Les Miles points to the student section to thank them for his support, before leaving the field after the LSU-Texas A&M football game in Baton Rouge, Saturday, Nov. 28, 2015. LSU won, 19-7, and it looked likely that it might be his last game coaching at Tiger Stadium.

Advocate staff photo by BILL FEIG -- LSU fans get to meet the Tigers on Aug. 14.

Advocate staff photo by TRAVIS SPRADLING -- iLSU head coach Les Miles points to the student section to thank them for his support, before leaving the field after the LSU-Texas A&M football game in Baton Rouge, Saturday, Nov. 28, 2015. LSU won, 19-7, and it looked likely that it might be his last game coaching at Tiger Stadium.

LSU has its football coach. And it’s Les Miles.

The 11th-year coach will remain the program’s leader, athletic director Joe Alleva announced after the Tigers’ 19-7 win over Texas A&M on an emotional Saturday night in Tiger Stadium.

Multiple national reports Monday confirmed The Advocate’s report last week that Miles was coaching for his job in the last two games against Ole Miss and A&M and that his tenure at the school was in jeopardy of ending. ESPN reported this week that Miles would likely be fired after the season — which The Advocate did not report.

More important: They know who their coach is.

“It’s great to be the head coach at LSU,” Miles said after Alleva addressed reporters.

Miles was carried off the field on the shoulders of offensive and defensive linemen, and he was serenaded with chants of his name before and after the game.

Alleva, LSU president F. King Alexander and Miles met in the coach’s private locker room at Tiger Stadium following the victory. Miles said Alexander told him, “I want you to be our coach. You are our coach,” and Alleva followed with the same message.

“Les and I have talked about this program. We are committed together to working to win to compete at the highest level,” Alleva said. “We’re going to go forward together and win championships here at LSU.”

The outcome of Saturday’s game had no impact on Miles’ future, Alleva said in a one-word answer to a reporter. ESPN reported Saturday night that the decision to retain Miles was made during the third quarter of the game against A&M. Alleva was not in his booth for much of the third quarter.

FootballScoop.com, a Baton Rouge-based group that closely monitors college football coaching turnover, reported that Miles likely would remain at LSU with a win over A&M. The website, along with the Palm Beach Post, reported Saturday morning that Florida State coach Jimbo Fisher had informed those around him that he intended to remain at FSU. Fisher, LSU’s offensive coordinator in 2000-06, was expected to be the top candidate to replace Miles.

Alleva declined comment for the past two weeks, putting off any public address until after the season. Miles said he has not been told anything in regard to his job status before that postgame meeting with Alexander and Alleva.

Meanwhile, signs of support for Miles were sprinkled across tailgating scenes Saturday.

“Support the Hat,” one sign said. It was fashioned to a table. On the table: a white hat emblazoned with a purple “LSU” — Miles’ traditional game day cap.

“Keep Les Miles!” read another sign, stuck in front of a tailgate tent.

Others were more creative. One group of tailgaters painted a saber-wielding Miles riding Mike the Tiger. Words were scribbled next to it: “Miles’ last stand. Hell of a coach. Hell of a man.”

Louisiana Gov. Bobby Jindal, even, offered kinds words for the coach in a message on Twitter: Les Miles “is a great coach and a better man. He is a fantastic ambassador for our state. I hope he remains our coach.”

Miles entered Tiger Stadium more than two hours before kickoff to a roar from a small group of students already in the stands. They chanted Miles’ name as he waved to them.

Some fans carried signs reading “Fire Alleva,” and the athletic director was booed during a taped message that played on the videoboard before kickoff.

During the first quarter of Saturday’s game, a banner hung from a suite on the east side of Tiger Stadium. It read, “Keep Les Miles. Fire Joe Alleva.” The banner was taken down after the first quarter.

Over the past 10 days, Miles has battled with what he calls “prevailing” distractions about his future in Baton Rouge. In his last meeting with reporters on Wednesday, he declined to defend himself and said he hoped to be at LSU “another 11 years.” Miles’ radio show Wednesday night turned emotional. A child and adults wept while asking Miles questions at TJ Ribs on Acadian Thruway.

Miles had provided no real answers about his job status, and LSU players had openly defended their coach. They did the same following the victory.

“I’m happy. Like I told y’all, I wouldn’t want to go to war with anyone but him,” said running back Leonard Fournette, who ran for 159 yards in the win.

It was another “W” for a résumé full of them.

Miles entered with the best winning percentage (.774) of any coach in the past 100 years of LSU football. The Tigers currently have the No. 2 recruiting class for 2016 and, just three weeks ago, were 7-0 and No. 2 nationally.

Miles, though, is in the midst of, arguably, his rockiest two seasons as coach. LSU went 8-5 last year, tied for the worst mark in his tenure, and the Tigers entered Saturday having dropped three straight games by double-digit margins — the first time that has happened since 1966.

They broke that skid Saturday, securing their coach’s job in the process.

“We love him,” defensive tackle Christian LaCouture said, “and he deserved it.”

How close was Jimbo Fisher to being LSU's coach? Report: 2015 probably the closest it got