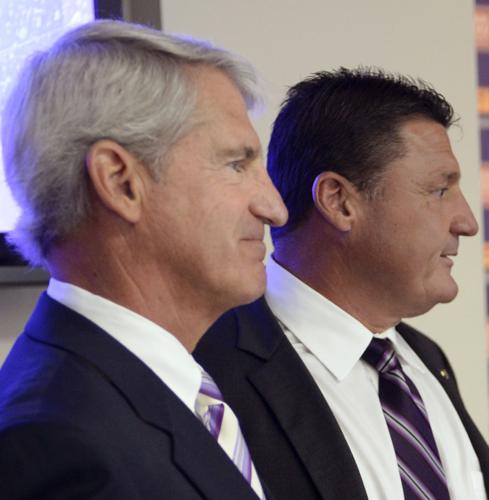 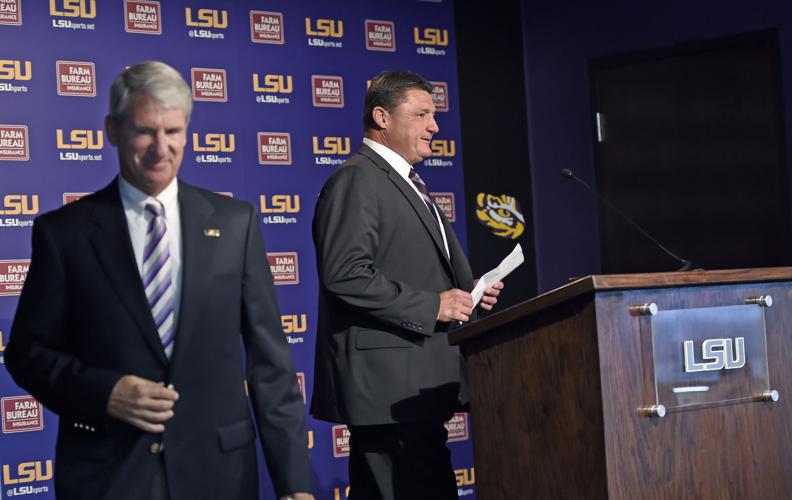 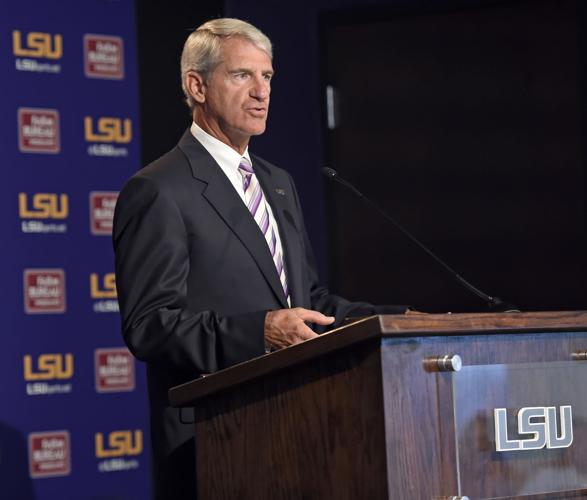 LSU athletic director Joe Alleva answers questions during a press conference on the dismissal of Les Miles and the promotion of Ed Orgeron to interim head football coach Monday Sept. 26, 2016.

LSU athletic director Joe Alleva answers questions during a press conference on the dismissal of Les Miles and the promotion of Ed Orgeron to interim head football coach Monday Sept. 26, 2016.

LSU athletic director Joe Alleva said he would consider the rest of the season “an audition” for interim football coach Ed Orgeron to retain the job on a full-time basis, but he added that he doesn’t believe he will have a problem attracting a quality candidate to replace Les Miles.

Speaking Monday shortly after introducing Orgeron at a packed news conference, Alleva said he would have an unspecified number of “advisers” when it comes to the search for Miles’ replacement, but he plans on "doing most of the work myself."

Who might be LSU's next football coach? A few names to consider ...

Coaching searches are unpredictable processes in which schools often don’t land their first,…

“I’m going to try to find the best fit for LSU,” he said. He added, “The only advantage of changing coaches now is we have a head start on the other schools that will be looking for coaches.”

As has been the case in the past, Alleva remained adamant that LSU’s next coach be a sitting head coach or someone who has been a head coach during their career.

“I can’t have someone at LSU without head coaching experience,” he said. “This job is too big. No matter how good you think someone is, you don’t know how good they are.”

As expected, Alleva would not discuss potential candidates but believes he will have no shortage of qualified applicants.

“I have a totally open mindset,” he said. “The only thing I’m concerned about is giving the players the best opportunity to win. This is a great job — one of the 10 best in the country.”

Orgeron, who was LSU’s defensive line coach and recruiting coordinator under Miles, would qualify under Alleva’s criteria. He was head coach at Ole Miss from 2005-07 and interim head coach at Southern California in 2013.

Miles was fired Sunday after LSU dropped to 2-2 this season with an 18-13 loss Saturday at Auburn.

“It’s never easy when you make a change, especially when a change involves a man like Les Miles,” Alleva said at the news conference. “His record here is well documented. Les is loved by his players, and that’s because he cared about them as people. He tried to develop them into fine young men and did a great job at that.

Recap: Ed Orgeron on what LSU needs, the new offense and his 'dream' job

Ed Orgeron says that as a Louisiana native, it's "a dream" to have the opportunity to be LSU…

The cost to buy out the rest of Miles’ contract will run LSU roughly $9.6 million, a source told The Advocate. That amount is payable over six years.

Miles’ buyout is listed in his contract at $12.9 million, but that amount is reduced by what Miles has already been paid in salary this year. Miles earned $4.35 million per year in total compensation at LSU — or roughly $3.3 million so far in 2016.

The buyout could be further reduced if Miles gets any other job in or out of coaching. Miles said Monday on "The Dan Patrick Show" that he would like to coach again.

Alexander went on to stress that no state funds or student fees would go toward Miles' buyout.

Offensive coordinator Cam Cameron was also fired Sunday. Cameron received a new three-year contract in March paying him $1.2 million per year, but he will only be owed six months' salary because of the so-called “Les Miles clause” in his contract. The clause, part of the contracts for some but not all LSU assistants, says the school only owes the assistant six months' salary in the event Miles is terminated.

The Advocate's Ross Dellenger contributed to this report.

A streak was broken on Monday evening: LSU opened practice to reporters.

On this Monday afternoon, LSU practiced in its indoor football facility.

As it shops around for a "home run" hire for its vacant head football coach job, one media outlet is reporting that LSU plans to gauge the int…