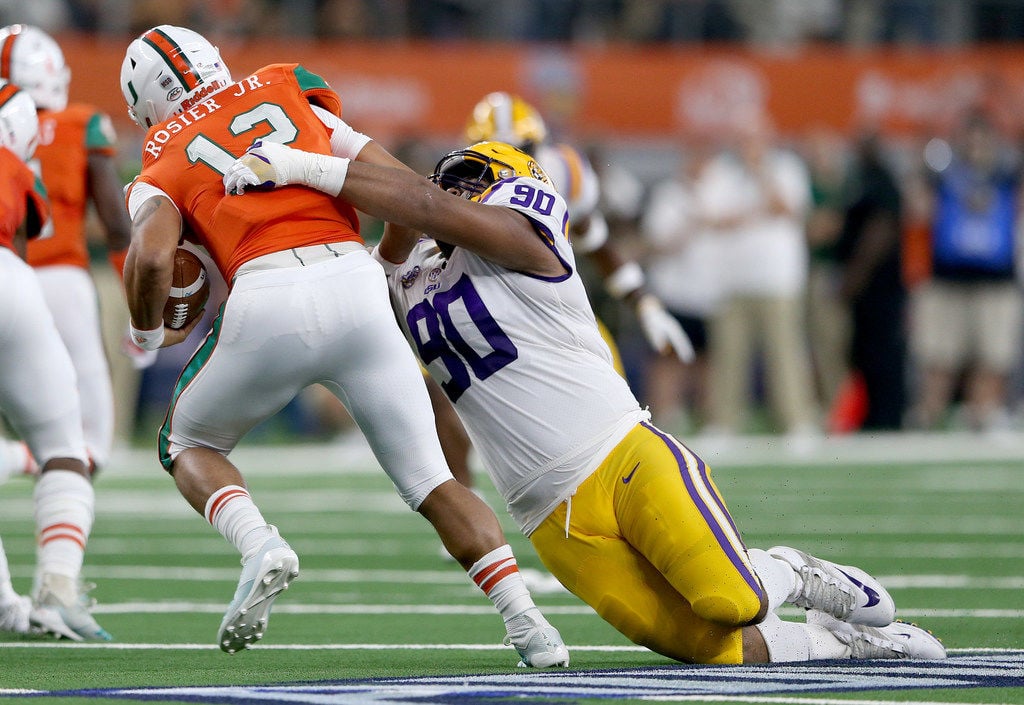 One of the most crucial pieces for the Tigers defense came next.

"There will be a big battle for the Green Team," Orgeron said Thursday.

Yeah, you heard that right.

It's the speedy, energized quartet named after a lesson traffic lights have been teaching for years:

Maybe you recall another pass-rush package from LSU's recent past called "Cheetah," a third-down defense the Tigers used in 2017. They're quite similar, linebacker Michael Divinity said.

Cheetah used five defensive backs, two down linemen and four linebackers. Aranda would scatter the linemen and linebackers in various spots on the line of scrimmage to overload a confused opposing offensive line.

The Green Team is more about finding and exploiting the best matchups, arranging any four pass rushers across the line of scrimmage.

"If you're the best pass rusher on the team," sophomore outside linebacker K'Lavon Chaisson said, "you're on the Green Team."

The Green Team was used last season, and it often included Divinity and outside linebackers Andre Anthony and Ray Thornton, plus a rotation of either Breiden Fehoko or Rashard Lawrence on the defensive line.

Sometimes the unit was deployed for a whole possession against pass-happy teams — like against Central Florida in LSU's 40-32 Fiesta Bowl victory.

When the Knights had one final drive with 1:42 left in a one-possession game, LSU's Green Team forced quarterback Darriel Mack to force a throw downfield that bounced off Devin White's helmet and was intercepted by Stevens.

"The ball's got to come out in a couple seconds or you're going to get sacked," safety Grant Delpit said.

Chaisson said the coaching staff recently showed them a study that said the average time for a quarterback to get the ball off, from snap to throw, is 2.6 seconds.

After Ed Orgeron's analysts poured over game tape and data from the 2018 season, they returned to LSU's head coach with a statistic.

That's the puzzle defensive coaches are trying to solve in the era of the run-pass option offense, a scheme that LSU itself is using and something even Aranda has said is confounding for his pass rushers.

Several offenses, not just RPOs, are built off taking advantage of the number of defenders who are rushing. So the fewer defenders LSU can send while still being able to get to the quarterback, the better.

"If we can have a four-man rush and play coverage, that'll be great for us," Orgeron said. "That's what we want to do."

But the Green Team package isn't just limited to four-man rushes. It's also installed with a plethora of blitzes, Divinity said, that can send up to as many as six defenders screaming after the quarterback.

Last year, LSU had to adjust to offenses that were sending running backs out of the backfield on pass patterns. Last year, the All-American White was matched up on the running back while the Green Team was in, Divinity said. If the running back stayed back in pass protection, White would blitz.

White led the team with 12 tackles for loss, including three sacks.

With Divinity replacing White at inside linebacker in the spring, it's likely that he'll have a similar role, although his five sacks as an outside linebacker last season might call for him to be more diverse on the Green Team — if he gets named to the squad, that is.

"Oh, I'm gonna make sure I get in there," Divinity said.

And that's a big question of the preseason: Just who will be on the Green Team?

Ask anyone on the defense, and they'll tell you they are.

That includes Chaisson, who missed last season because of a season-ending ACL tear in Week 1 against Miami.

The chiseled, 6-foot-4, 250-pound Texas native could be the best pass rusher on the team, and Orgeron said he expected Chaisson to be a 12-to-15 sack guy this season.

So Chaisson's got to be on the Green Team, right?

The Green Team's members change week to week depending on who's hot at the time, Stevens said. But whomever it is, there's a spirited camaraderie that takes place when they're sent onto the field.

"We literally talk about it as soon as we get the Green Team to come out there," Divinity said. "We're arguing about who's going to get the sack. Usually the person who gets off (the ball) first gets the sack, but sometimes that first person makes the quarterback come up into the person who got off the ball last."

That's exactly what happened late in the third quarter in LSU's 74-72, seven-overtime loss to Texas A&M.

The Green Team of 2019 will need to boost a pass rush that sputtered at times last season. LSU tied for 32nd nationally with 34 sacks, but there was a seven-game stretch from Week 3 at Auburn to Week 10 against Alabama when the Tigers only produced 10 sacks.

And more sacks works out into a mutually beneficial equation: more glory, more wins, more of a shot at the NFL.

CANTON, Ohio — Kevin Mawae can look right through a questioning reporter like a tough Polynesian warrior.

Rabalais: With Johnny Robinson's enshrinement in Canton, a great wrong is righted at last

CANTON, Ohio — Pro Football Hall of Fame enshrinement Saturday is a beautiful celebration of an often brutal and unrelenting game.

LSU held its second football practice of preseason camp on Saturday afternoon. There were our observations.