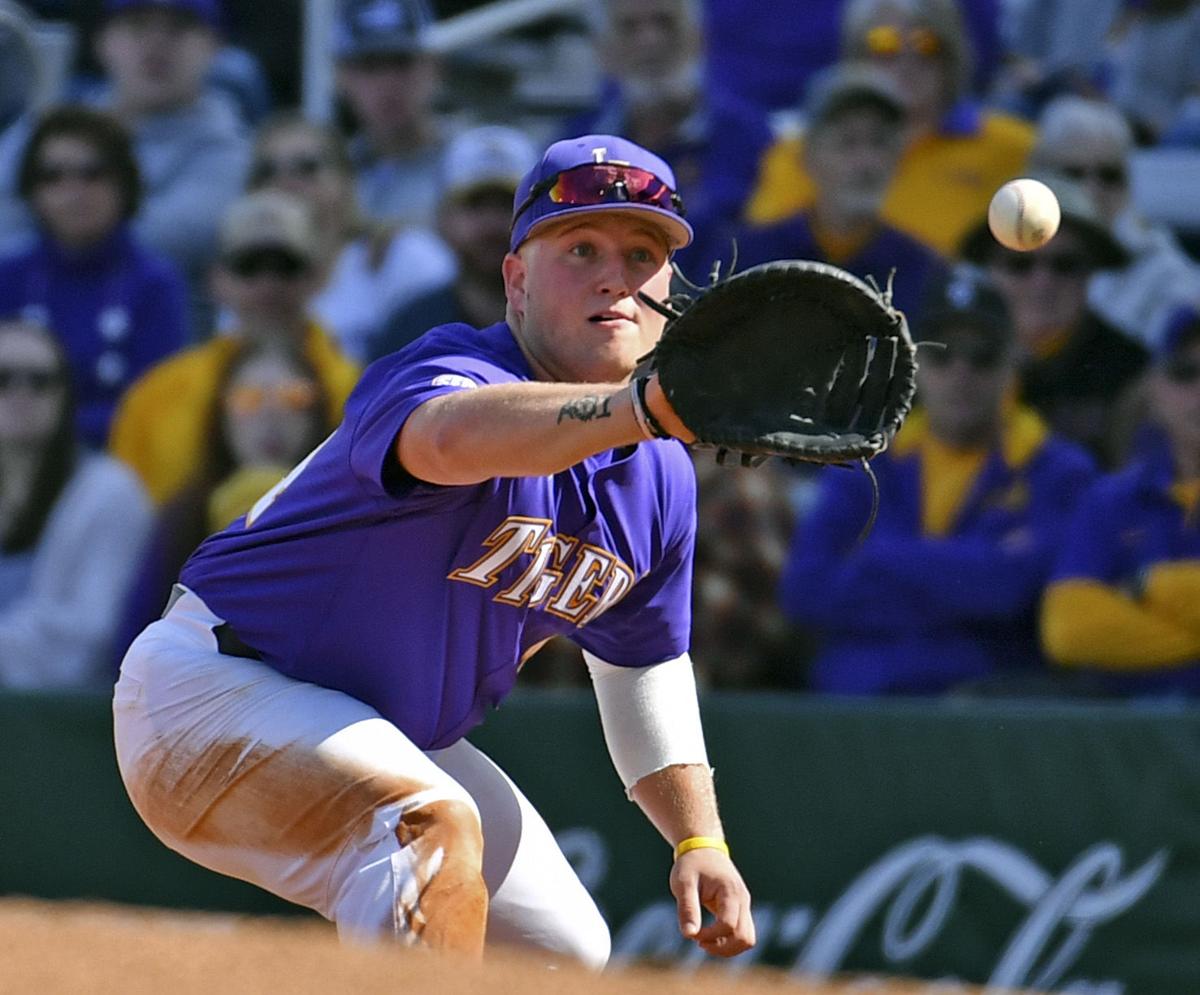 LSU first baseman Cade Beloso (24) makes the catch at first to get the out in the second inning against Indiana, Saturday, February 15, 2020, at LSU's Alex Box Stadium in Baton Rouge, La. 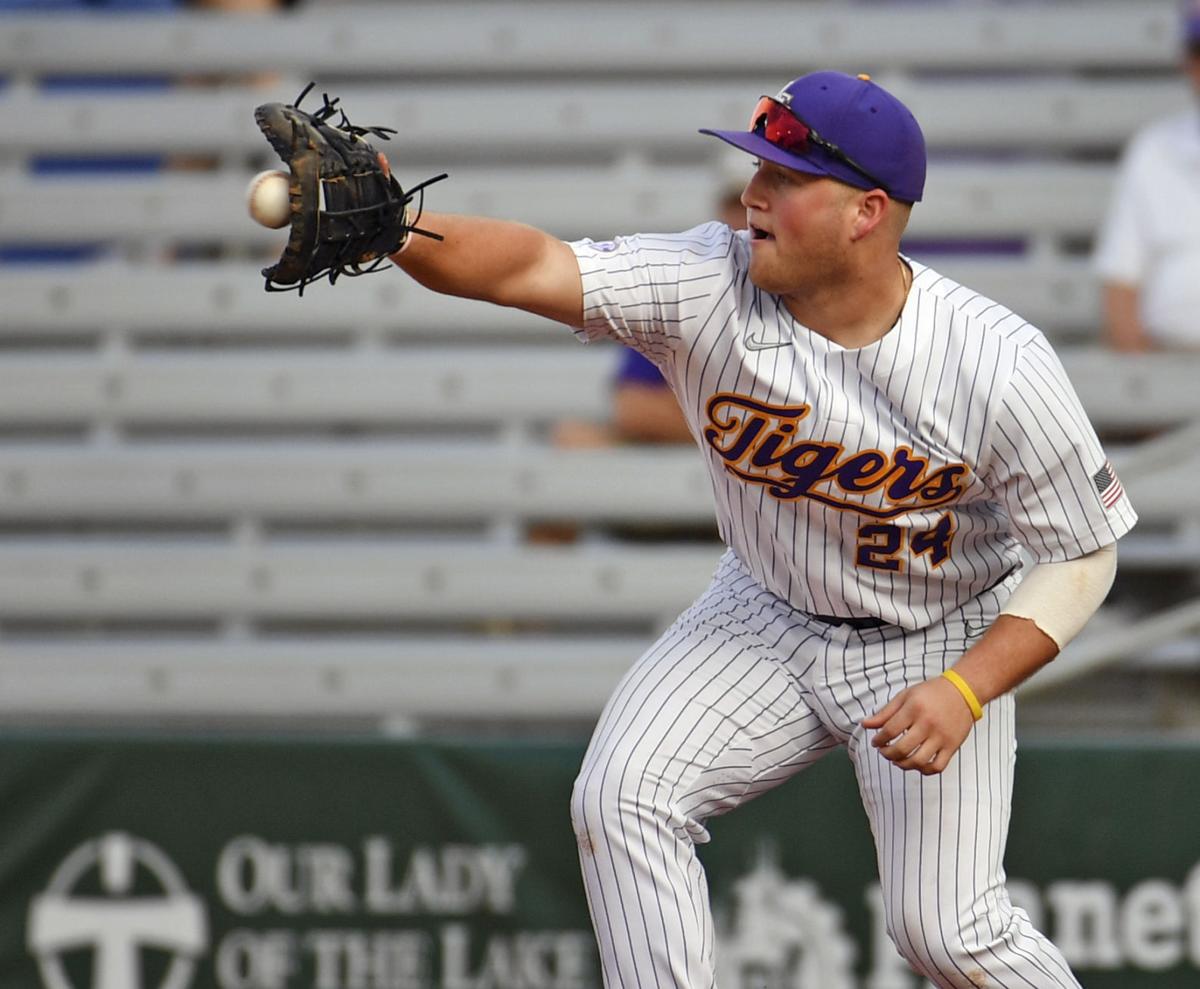 LSU first baseman Cade Beloso (24) makes the catch at first to get the out in the second inning against Indiana, Saturday, February 15, 2020, at LSU's Alex Box Stadium in Baton Rouge, La.

With LSU holding onto its lead in the ninth inning against Indiana last Saturday, sophomore Cade Beloso stretched. He kept his foot against first base as he caught an errant throw from Zack Mathis, recording the first out.

The play showed clear evidence of Beloso’s improved defense at first base. He saved LSU from trouble and, after five games, Beloso has played more reliable defense than anyone else on the team, an outlandish statement last season.

“Last year, he didn't take a lot of pride in his defense,” LSU coach Paul Mainieri said. “Now he does.”

Beloso hit well his freshman season, batting .279 with 10 home runs, but his defense lagged. He didn’t feel comfortable around the bag, and he sometimes struggled to pick errant throws out of the dirt. Beloso looked lost tracking pop-ups. Mainieri accepted the issues, knowing he needed Beloso’s bat in the lineup.

“You've gotten better over the summer,” Mainieri told Beloso after he returned to LSU.

Beloso entered the season trying to repeat his offensive mindset. He wanted to spray the ball all over the field. Though teams have often used a pull-side shift against him, Beloso had batted .400 with three extra-base hits entering the series against Eastern Kentucky. But on defense?

A former outfielder, Beloso had never struggled to catch pop ups. But the first game he played last season, he ran into pitcher Landon Marceaux near the LSU dugout as they tracked a fly ball. Mainieri chewed him out. Catching pop ups became an adventure.

Beloso worked on every aspect of his defense throughout preseason practice. He came to the field in windy conditions to gain repetitions in bad weather, and when he focused on pop ups, Beloso used a machine to shoot balls high into the air. Teammates noticed.

“He's out here in early work trying to get extra reps because he knows at the end of the day, it could come down to one play,” junior catcher Saul Garza said. “If he can make a big-time scoop in the eighth inning of a ballgame, that could be the difference.”

While LSU has experimented with its infield, so far using four different combinations, Beloso has provided a constant presence at first base. He caught three pop ups in foul territory opening weekend, settling underneath the balls with ease. He has a 1.000 fielding percentage.

Beloso has not played perfect — Mainieri thought he missed a couple plays Wednesday night against Nicholls — but he feels relaxed. He increased his attention on defense during the offseason, and the extra work has translated to games.

Beloso cares about his defense this season. He wants to reach perfection.

“If you're going to do something,” Beloso said, “you might as well be perfect at it — or damn near close to it.”

LSU baseball addresses problems before Eastern Kentucky: 'Fundamentally, we've got to get better'