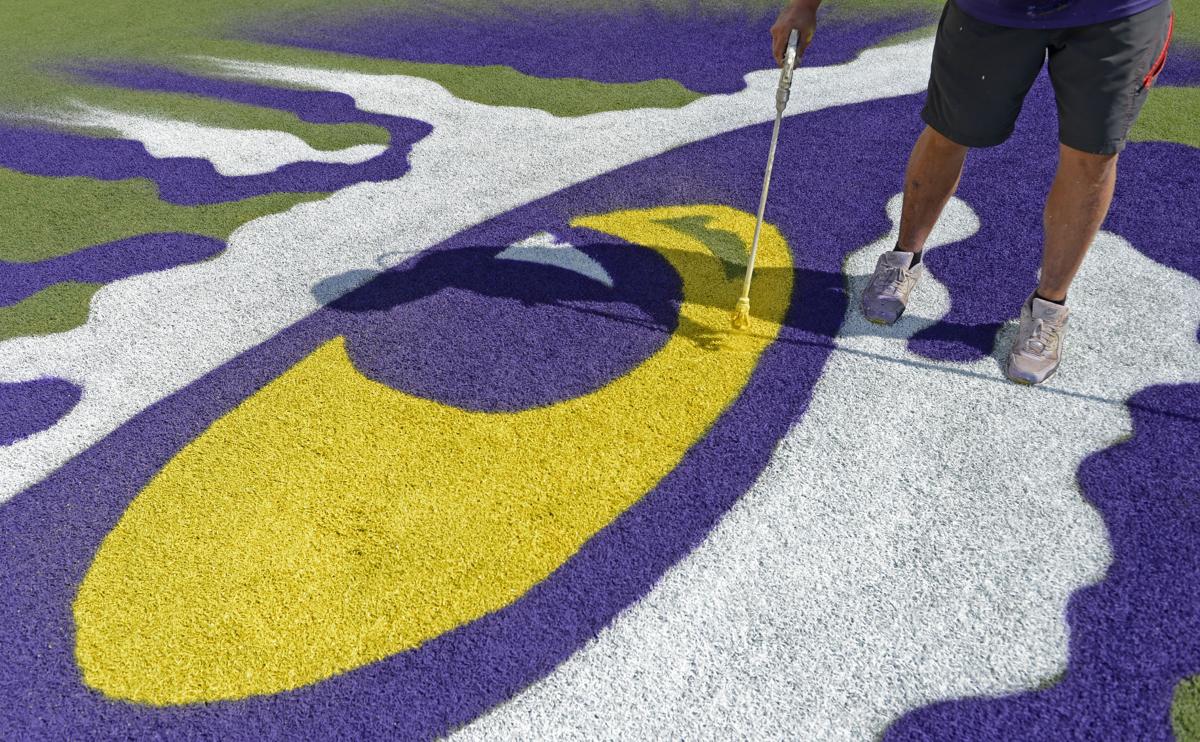 LSU horticultural attendant John Pfeifer paints the gold of the "Eye of the Tiger" at centerfield of LSU's Tiger Stadium, Wednesday, September 7, 2016. 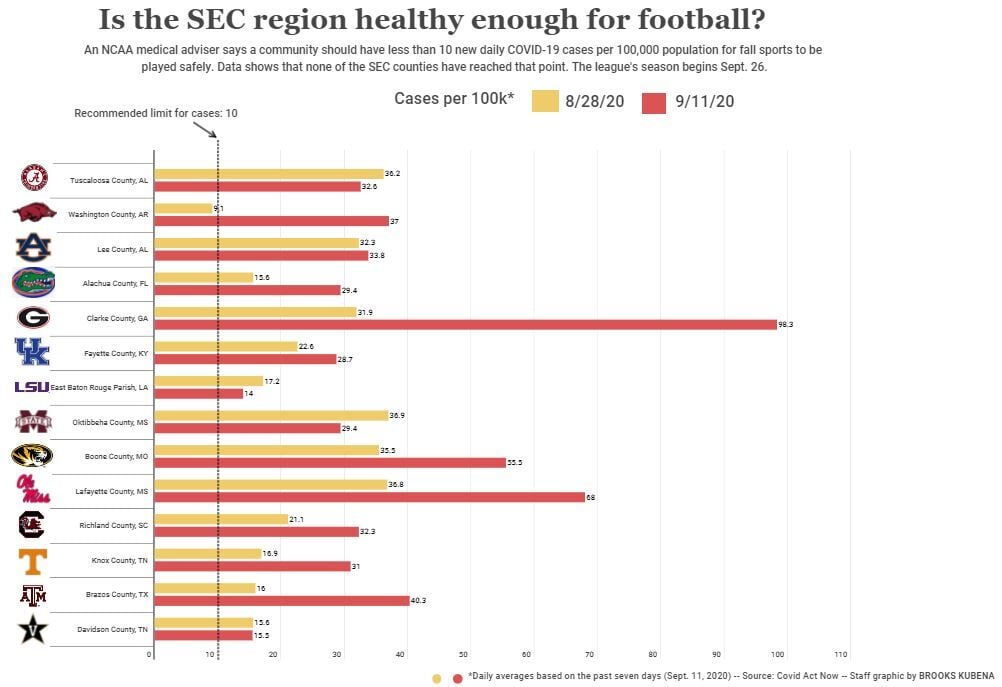 Cell phone data shows over 25,000 devices detected inside Tiger Stadium during the 2019 season live in wide-reaching areas of the country. 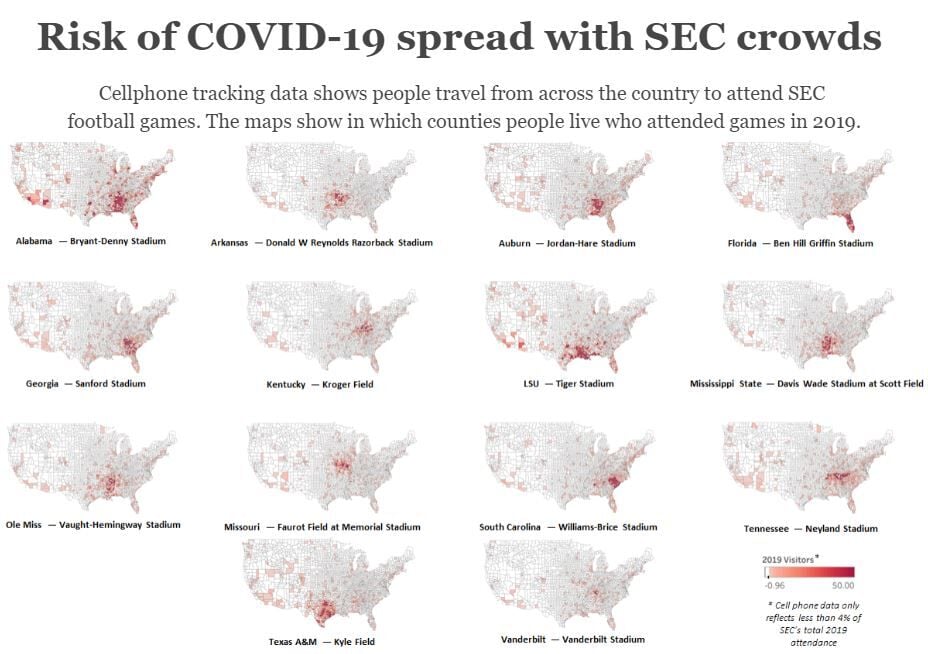 LSU horticultural attendant John Pfeifer paints the gold of the "Eye of the Tiger" at centerfield of LSU's Tiger Stadium, Wednesday, September 7, 2016.

Cell phone data shows over 25,000 devices detected inside Tiger Stadium during the 2019 season live in wide-reaching areas of the country.

No, the Sept. 26 season opener against Mississippi State won't have the atmosphere that makes Death Valley one of the most iconic game-day destinations in the country, but university and athletic officials have expressed that their quarter-capacity venue is actually a glass half-full.

That the 2:30 p.m. kickoff is scheduled at all is "a reason for celebration," LSU athletic director Scott Woodward said Wednesday, when the school released its newest safety procedures and guidelines.

An estimated 25,000 fans, made up almost entirely of season-ticket holders and students, will be in attendance for this celebration. They'll be required to wear masks. They'll sit in small groups spaced six feet apart. Alcohol, which can dull judgment when pandemic rules are paramount, won't be sold at least for the season opener.

LSU won't be alone. Every Southeastern Conference team except Vanderbilt will host fans in stadium capacities that range from 20-25%. Tens of thousands of people will visit the league's campuses.

Meanwhile, coronavirus case numbers are surging in the majority of SEC counties, and public health officials and infectious disease experts are at least wary of, if not opposed to, the league's decision to host crowds.

"I am concerned," said Dr. Carlos del Rio, the executive associate dean at Emory University's School of Medicine. "I don't really think we should have fans in stadiums right now."

Del Rio serves on the NCAA's COVID-19 advisory panel, and in August, he and NCAA chief medical officer Dr. Brian Hainline warned the spread of coronavirus is still a major hurdle for college sports to overcome.

Among other recommendations, Del Rio said communities should have fewer than 10 new daily cases per 100,000 population to safely proceed with contact sports.

No county with an SEC school meets that threshold, according to Covid Act Now, a data resource dedicated to the coronavirus pandemic. Nine counties have at least 30 new cases per 100,000, and Clarke County, Georgia, where the University of Georgia is located, has surged from 31.9 new daily cases to 98.3 in the past two weeks.

Louisiana's total case numbers have dropped to a seven-day average of 686, according to the Centers for Disease Control and Prevention, and, on Friday, Edwards began Phase 3 of the state's re-opening plan.

Still, East Baton Rouge Parish's most recent seven-day average recorded 14 new cases per day, and LSU has reported 704 cases of COVID-19 on campus since students returned for the fall semester.

"There will be outbreaks related to these football games," said Dr. Alex Billioux, Louisiana's top public health official. "The question is how big will they be?"

Billioux is the public face of the state's pandemic response, although he is resigning from his position at the end of the month for personal reasons. Since COVID-19's initial spread, Billioux has been the assistant secretary for the Louisiana Department of Health's Office of Public Health and a key policy adviser for Gov. John Bel Edwards.

Billioux said with crowds of 25,000 — even if everyone says they have no symptoms, even if they are screened for temperature at the gates — the state's case ranges indicate that anywhere from 150 to 500 fans will already have COVID-19 before they enter the stadium.

Those are "stark numbers," Billioux said, and he's shared them in counsel with sports organizations across the state. The New Orleans Saints will play without fans for at least Sunday's season opener against Tampa Bay. Tulane also announced Yulman Stadium won't host fans in the Green Wave's home opener.

No Louisiana football team that plans on hosting fans matches LSU's attendance numbers or geographic reach. Any virus transmission inside Tiger Stadium could be devastating.

Dr. Tara Kirk Sell, an assistant professor at Johns Hopkins Bloomberg School of Public Health, said any time tens of thousands of people are brought together, there's an opportunity for what's called a "super-spreading event." Essentially, a single person can infect a large number of people.

Stadium staff must be "really vigilant" about monitoring crowds and enforcing mask mandates, Billioux said, else "the numbers that'll come out of that event with COVID would be huge."

The Advocate mapped out anonymized cell phone tracking data to illustrate how far people travel to attend SEC football games. Over 7.4 million people attended SEC games in 2019 — more than any other conference. The available data only reflects less than 4% of the league's reported attendance.

Meet Darren Evans, LSU's newest addition to the secondary; 'Show them what you've got'

The data show 69% of in-state visitors to Tiger Stadium on game day came from outside of East Baton Rouge Parish. Of total devices detected, 23% came from out of state.

Travelers to SEC games last season came from states on both coasts. California and Washington. New York and Maine. Five schools had visitors from both Alaska and Hawaii. The data did not list international travelers.

SEC members have made efforts to limit traveling fans. Half of the schools have eliminated single-game tickets, restricting entrance mostly to season-ticket holders, students, plus a 500-ticket allotment for the visiting team's family members.

Interim LSU president Tom Galligan said it will be harder to restrict access to season-ticket holders who live in other states, but he said "if they stay safe, mask, distance, they'll be OK."

The in-state travel is still problematic, Del Rio said. The three states with the most cases per 100,000 are all within the SEC footprint, and five SEC states rank in the nation's top 10 total COVID-19 case numbers in the past seven days.

"Normal is not where we are right now," Del Rio said. "We continue to pretend that life is normal when life is not normal."

Galligan said LSU leadership is confident fans will be able to socially distance in Tiger Stadium, that they'll wear their masks and, since the venue is outdoors, transmission won't be as likely as it would be indoors.

Billioux, Sell and Del Rio each said there is little risk when groups of fans are all seated six feet apart, wearing masks. The risks are in the ingress and egress — the frequent movement that's usually natural for fans at games.

"The problem is you're not controlling where they're going, and, if there's 25,000 people in a stadium, that's a lot of people," said Sell, a former Olympic swimmer who researches emerging infectious diseases. "They can back up in lines at concessions or lines for the bathrooms."

Woodward said there are developing plans for phased entry to eliminate long lines at the gates, and LSU officials said there will be more event management staffing to enforce social distancing, mask mandates and the seating arrangements. Their first steps will involve education and reminders. Strictness will increase afterward, although Galligan wasn't specific with details.

"If we have to enforce it, our first enforcement measures will be gentle and persuasive," Galligan said. "If we have to be more forceful, we will. But I hope we don't."

Tiger Stadium will open the 2020 season at 25% capacity, LSU announces; no tailgating

On Friday, Louisiana surpassed 5,000 deaths related to coronavirus, according to the Louisiana Department of Health. Edwards said in a news briefing Friday that his office is still wary about the numbers that will emerge after the Labor Day holiday weekend.

All SEC states have 60% of their ICU beds occupied, the CDC's second-highest level, and four have 70% or more. Billioux said one of the major hospitals in Baton Rouge is nearly at 100% capacity. Going to a football game, he said, "can translate to people getting infections and dying."

There will be no alcohol sold at Tiger Stadium for at least LSU's first football game of the 2020 season, an athletic official confirmed Thurs…