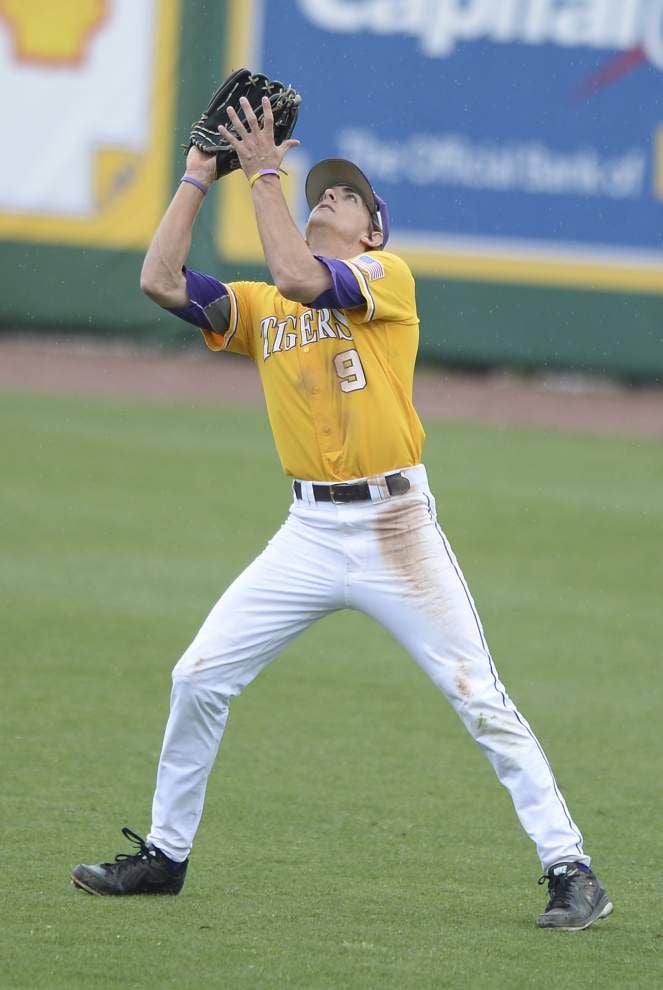 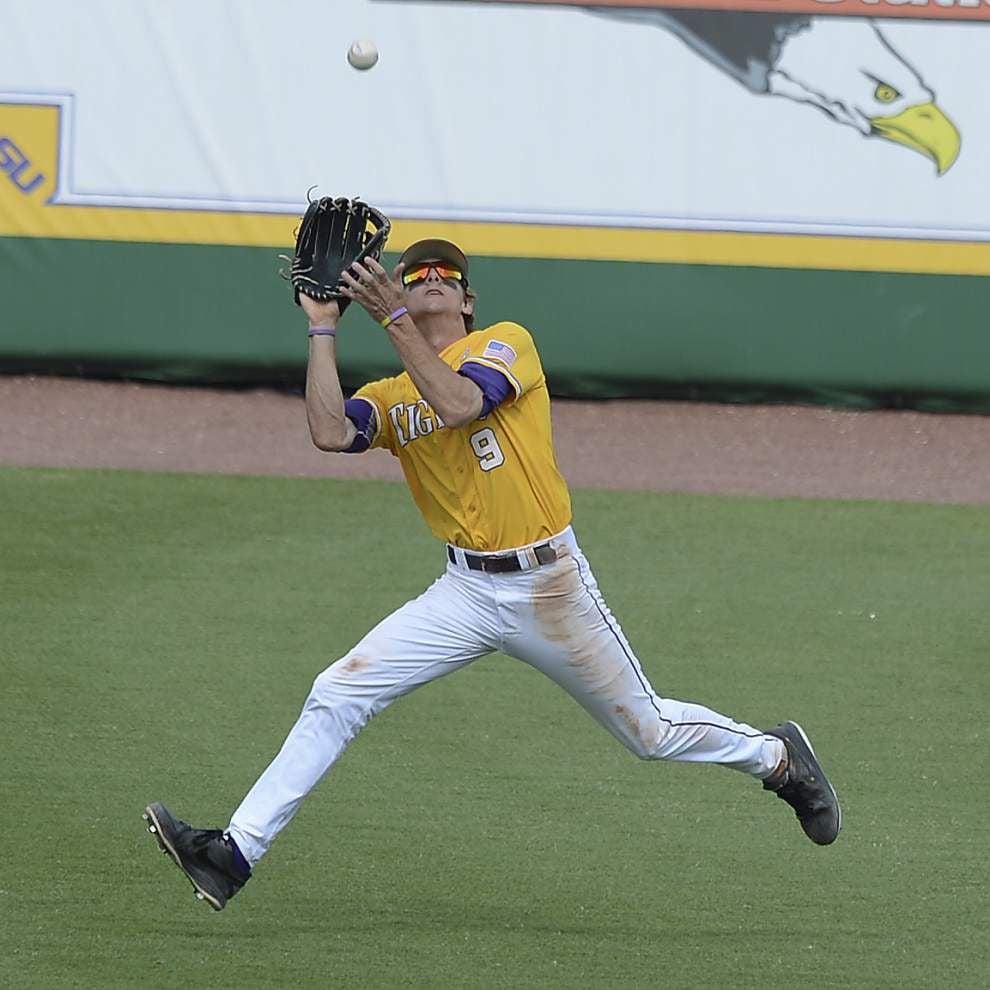 Advocate staff photo by HILARY SCHEINUK -- LSU's Mark Laird makes the catch in right field to get Blake Baxendale out in the top of the ninth inning against Arkansas at LSU's Alex Box Stadium in April. 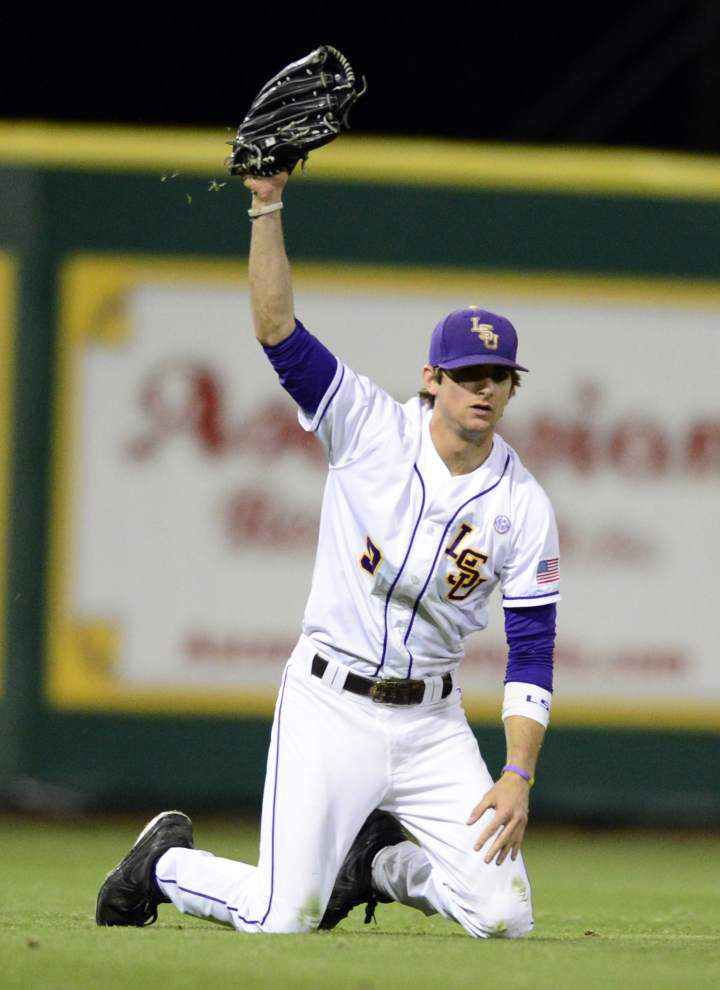 Advocate staff photo by CATHERINE THRELKELD -- LSU left fielder Mark Laird holds up the ball after making a diving catch during the game between LSU and Virginia Tech at Alex Box Stadium.

Advocate staff photo by HILARY SCHEINUK -- LSU's Mark Laird makes the catch in right field to get Blake Baxendale out in the top of the ninth inning against Arkansas at LSU's Alex Box Stadium in April.

Advocate staff photo by CATHERINE THRELKELD -- LSU left fielder Mark Laird holds up the ball after making a diving catch during the game between LSU and Virginia Tech at Alex Box Stadium.

The home run-saving catch against the wall, the on-the-run grab in foul territory, the diving one to steal a double in the gap.

Next time Mark Laird makes one of those, know that it came with years of unintentional practice. It’s the result of being the youngest of three boys.

“I was so little that they never let me hit,” Laird said, “so I’d just chase fly balls in the outfield.”

This went on for four to five years every weekend at the local high school field in Monroe. John, Matt and James Laird — each two years apart — never let little Mark swing the bat.

From age 10 through middle school, Mark chewed up the outfield grass chasing down fly balls off his brothers’ bats. It laid the foundation for a guy who has become, arguably, LSU’s best outfielder.

And, surprise, it’s Laird, who didn’t have a spot on the roster until another freshman was drafted, a kid who came to LSU first to play football.

Laird, a sophomore right fielder, has evolved into a consistent hitter and a speedy base runner who has made what seems like just as many jaw-dropping catches as heralded center fielder Andrew Stevenson.

“Nothing really amazes me anymore,” said volunteer assistant coach Will Davis, who works with the outfielders. “He’s so athletic.”

Defensive prowess aside, Laird entered Tuesday’s game against Northwestern State third on the team in batting average (.290) and fourth in hits (49), taking a “make contact” approach to the dish, he said.

The Tigers’ mainstay No. 2 hitter, across the board he’s one of the most consistent position players the program has had in the past two years — and he’ll be needed over the next month. The seventh-inning stretch of the baseball season is here.

Laird’s career at LSU began in summer workouts as a walk-on receiver for the football team. His roommates that summer: receivers Jarvis Landry and Odell Beckham Jr. and Australia-born punter Jamie Keehn.

Twice the MVP of the Class 1A state championship football game, Laird had more scholarship offers for football than baseball his senior season at Ouachita Christian School.

How’d he end up on the baseball team? He was the beneficiary of a surprising draft selection and coach Paul Mainieri’s revised recruiting philosophy.

With the implementation of roster limits and the new bats, Mainieri sought more speed and left-handed bats on the recruiting trail. In 2012, he found Stevenson, Sean McMullen and Hayden Jennings.

There was no room for Laird. After all, how many speedy, left-handed-hitting outfielders can you have?

Then Jennings got drafted in the sixth round and signed.

“We were blown away,” Mainieri said, “but because that happened, we had this opening on our roster.”

Laird fit perfectly. Mainieri told him of the roster opening, and he dropped football the next day. And now he’s here: an everyday starter who might be playing his last season with the Tigers.

Although he’s a sophomore, Laird is draft-eligible because he’s 21. He and 11 other LSU players met with major league scouts earlier this week to get a gauge on their sign-ability.

Laird is noncommittal on the decision to forgo his final two years of eligibility, but Mainieri has mentioned him as one of the underclassmen — joining Aaron Nola, Joe Broussard and possibly Jared Foster — who might make the leap.

“I’d like to come back, but if something meets what I’d like … I mean, it’s an opportunity I can’t pass up,” Laird said. “But I’m not really thinking about it. Thinking about playing baseball here.”

He’s making that look easier than it was at first.

“The first fall he was here, I wouldn’t have called him a good outfielder, honestly,” Mainieri said. “I do believe it was simply because he played at (one of the lowest levels) of high school baseball. Probably didn’t have anybody that could hit a ball 400 feet. … He’d dive for balls, but it was awkward with the way he dove.”

Davis credits the FungoMan, a programmable machine that shoots out baseballs.

“I just tried to re-create every play that would happen in the game with him and all of the guys,” Davis said.

Eventually, Laird’s speed shined through. Laird and Stevenson have the best 60-yard dash times on the team. They tied in the fall at 6.55 seconds, Davis said.

The line drive in the gap. The skying fly in foul territory. The rocket to the warning track.

He began to chase them all down — like those days as a kid with his brothers.

Finally, of course, that ended.