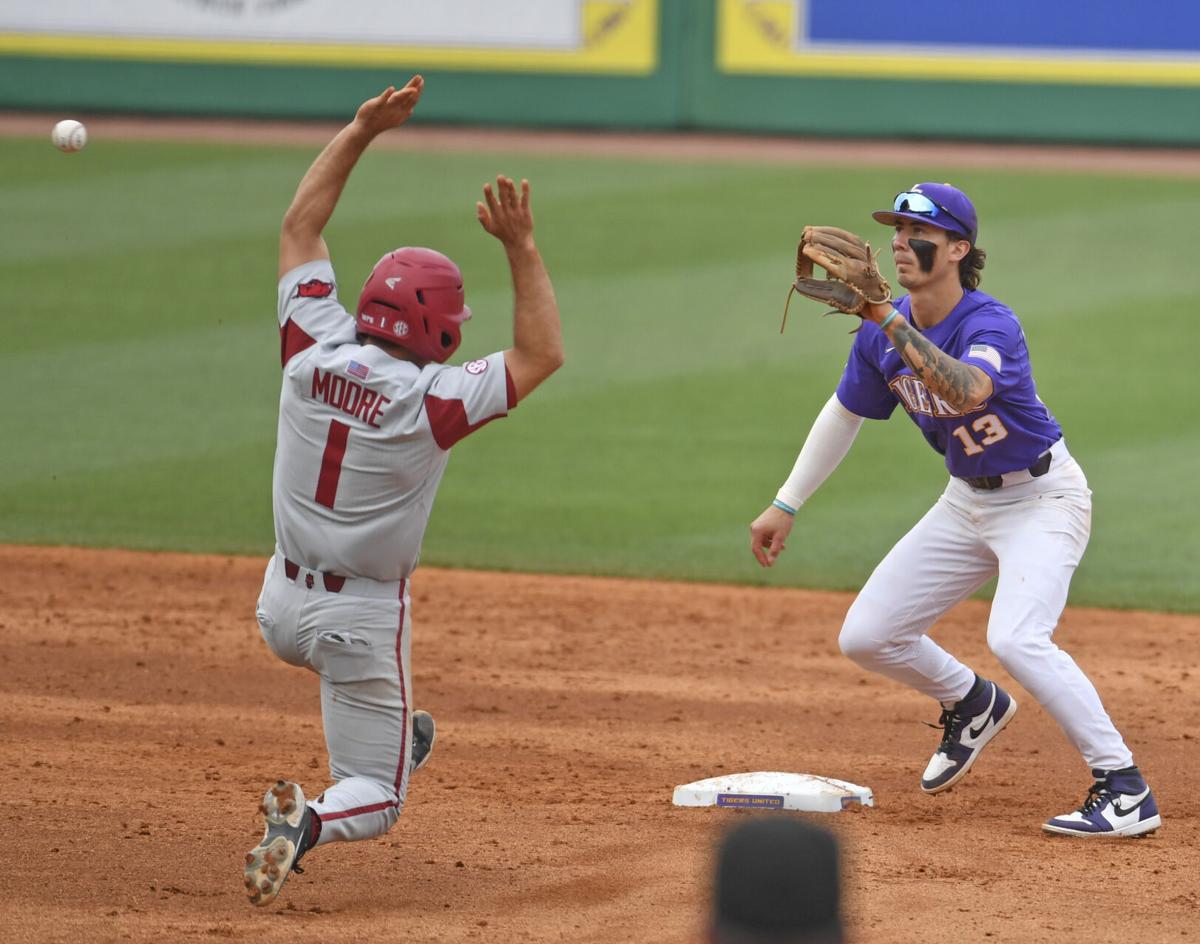 Arkansas second baseman Robert Moore (1) is tagged out at second base by LSU shortstop Jordan Thompson (13) after he was caught stealing, Saturday, May 1, 2021, at Alex Box Stadium on the campus of LSU in Baton Rouge, La. 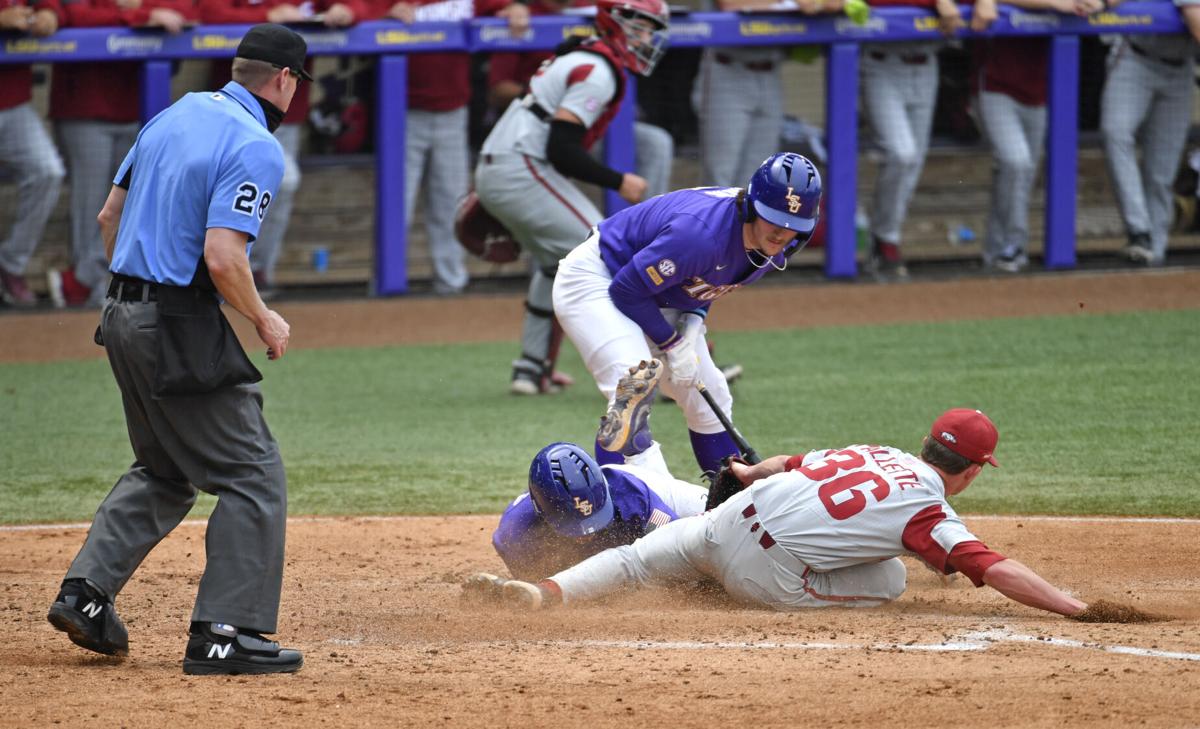 Arkansas second baseman Robert Moore (1) is tagged out at second base by LSU shortstop Jordan Thompson (13) after he was caught stealing, Saturday, May 1, 2021, at Alex Box Stadium on the campus of LSU in Baton Rouge, La.

Here, with so much at stake, was a chance for LSU’s bullpen to protect a lead. The Tigers had pulled ahead of Arkansas by four runs in the second game of a doubleheader Saturday. After a brilliant start from Ma’Khail Hilliard, they turned to a bullpen that had blown three leads in the Southeastern Conference. LSU needed to avoid a sweep.

First, freshman Garrett Edwards pitched three scoreless innings. Then, senior Devin Fontenot handled the ninth. He allowed three runs. The lead nearly evaporated. But Fontenot struck out the final batter before No. 1 Arkansas tied the game. He yelled from the mound and pointed to the crowd. LSU had won 5-4 to split the doubleheader after losing the first game 17-10 inside Alex Box Stadium.

“I thought it was critical,” coach Paul Mainieri said.

Rabalais: Baseball Tigers have given themselves a chance heading to season's final stretch

The win wouldn’t have happened without Hilliard. LSU had lost the final game of every weekend series since Jaden Hill’s season-ending elbow injury one month ago, which has forced Mainieri to make weekly decisions about his third starter.

After toying with the idea since Hilliard pitched three scoreless innings earlier this week against Grambling State in his first start this season, Mainieri decided the senior right-hander would start after LSU lost the first game of the doubleheader.

Hilliard, a starter his freshman year who has since fallen out of the rotation and pitched in various roles, made his first weekend start since 2019. Hilliard allowed one run over five innings and threw a season-high 79 pitches. He allowed two hits, throwing his curveball and changeup at will.

“He came out and threw his breaking ball for a strike. Threw his fastball for a strike,” Arkansas coach Dave Van Horn said. “We hit a couple balls hard, but really, he just got us out.”

Three strikes: What we learned from LSU's series loss to Arkansas

LSU dropped its series to No. 1 Arkansas this weekend and fell to 7-14 in the Southeastern Conference.

Supported by a three-run homer from sophomore infielder Cade Doughty, LSU carried a 5-1 lead — its first of the series — into the sixth inning. Edwards entered from the bullpen. A week ago, he had surrendered a game-tying grand slam that barely eclipsed the wall against Ole Miss.

Edwards retired the first five batters he faced. After working around a single in the seventh, Mainieri asked him how he felt. Edwards sensed his adrenaline rushing.

“Leave me in,” Edwards said.

He returned for the eighth inning and retired the side, carrying LSU’s lead into the ninth.

Before the second game of LSU's doubleheader Saturday night, new women's basketball coach Kim Mulkey slipped one hand into her son's old LSU glove and grabbed a baseball with the other.

There, Fontenot took over. Throwing 96 mph fastballs, he allowed a leadoff single. It marked the first time all night Arkansas’ leadoff hitter reached base. Fontenot walked the next batter. Then he gave up another single, loading the bases.

After Mainieri visited the mound, Fontenot induced a sacrifice fly and coaxed a line drive to Doughty. He needed one more out. Shortstop Jordan Battles squeaked a single up the middle. Two runs scored. Battles stood on first base representing the tying run. Fontenot, at last, struck out the next batter.

“I was thinking, 'Wouldn't it be nice if Devin made it easy for us in the ninth inning?'” Mainieri said. “It didn't work out the way I was hoping. But the idea is to get the third out before the tying run or the winning run crosses home plate. Sometimes it's not pretty.”

All of this came after Arkansas nearly blew out LSU in the first game of the doubleheader. The Razorbacks scored five runs in the first inning against fourth-year right-hander AJ Labas, who had given LSU nine straight quality starts and pitched a complete game last week. Mainieri worried the lengthy start would affect him.

LSU lost 17-10, unable to complete a late comeback. At one point, the Tigers trailed by 14 runs.

Arkansas added to its lead from that first inning. With LSU trailing 5-2 after scoring twice on wild pitches, the Razorbacks began the fifth inning with four straight hits. Mainieri replaced Labas with freshman right-hander Blake Money. The next batter homered.

Money struggled with his command, and by the end of the inning, Arkansas had taken a 12-2 lead. Nine of the runs were charged to Labas, a season-high.

Later staring at a 16-2 deficit and the possibility it may suffer its worst conference defeat since 2007, LSU mounted a small comeback. The Tigers scored six runs during the seventh inning, capped by junior Drew Bianco’s pinch-hit two-run homer.

Everyone — even, I suspect, the visiting Arkansas Razorbacks — went to LSU’s Alex Box Stadium on Friday night looking for glimpses of The Box of old.

Arkansas’ initial lead was too large to overcome, but LSU felt like it grabbed some momentum as it returned to the locker room. About an hour later, Doughty walloped the first pitch he saw and sent a three-run homer into the left field bleachers. LSU had its first lead of the series.

The Tigers added runs on a single by freshman Dylan Crews and a sacrifice bunt from Bianco. Then, once Hilliard completed his start, the bullpen that has struggled so much held on, keeping LSU’s postseason hopes alive.

Arkansas was the sixth top-10 team LSU played in the last seven weeks. Now, though nothing can be certain in the SEC, the Tigers have three series left, all against currently unranked teams. If they win each one, they could finish the regular season with a 13-17 conference record, likely putting them in the NCAA tournament.

“We need to win some series,” Mainieri said. “We've got three left. They're all going to be tough games. This was a critical win though, there's no question about it.”

At some point, one of them had to break.