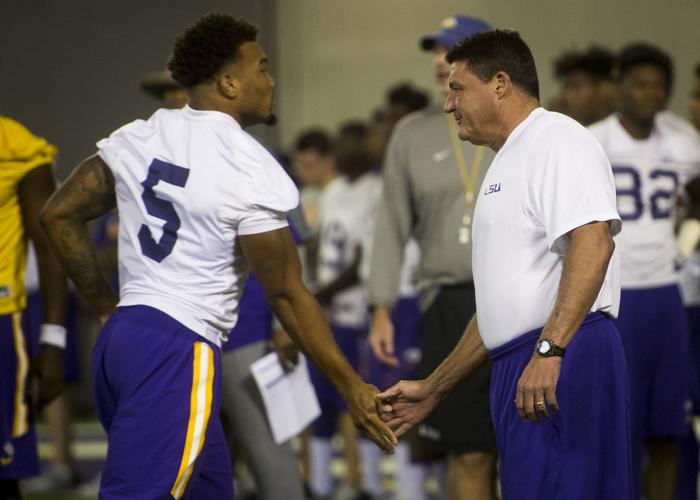 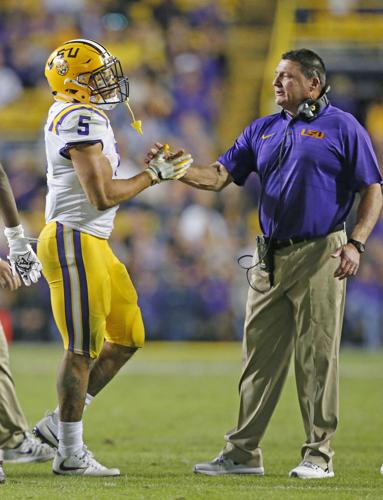 LSU running back Derrius Guice (5) gets a handshake from coach Ed Orgeron as he comes off the field against Texas A&M on Nov. 25, 2017 in Tiger Stadium. 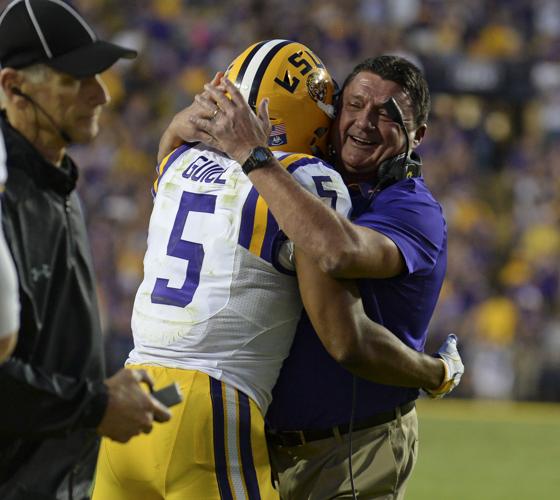 LSU running back Derrius Guice (5) gets a handshake from coach Ed Orgeron as he comes off the field against Texas A&M on Nov. 25, 2017 in Tiger Stadium.

LSU documented several instances in 2017 when Gloria Scott contacted university officials to report that former star running back Derrius Guice had sexually harassed her, but the direction of their inquiry changed after a man who represented her asked LSU to pay her.

Scott told The Advocate | The Times-Picayune that she never authorized the man, New Orleans youth basketball coach Cleavon Williams, to ask LSU for money over the Guice incident. Scott said she asked Williams for his help because she wanted to report that Guice had sexually harassed her, and she wanted him barred from playing in the 2018 Citrus Bowl.

But audio recordings, text messages and police reports obtained through public records requests show that Williams made an additional demand of sorts. He told Athletic Department officials that Scott would go public with her story if the university did not pay her $100,000 or withhold Guice from the Citrus Bowl.

Scott says Williams offered that deal without her permission, and, in any event, experts who represent sexual harassment victims say that demands for money in the wake of harassment are common, expected and do not diminish the credibility of a victim’s testimony. The request from Williams, however, appears to have changed LSU’s view of Scott’s complaint against Guice.

Scott Rabalais: When LSU officials testify on sexual misconduct, they must tell the unvarnished truth

LSU Senior Associate Athletic Director Miriam Segar filed a report with LSU Police on Dec. 28, 2017, about her conversations with Williams, while also reporting Scott’s allegations against Guice. LSU Police noted that Scott’s allegation — that Guice had sexually harassed her at the Superdome that month — was outside their jurisdiction, and that Scott had filed a report with the New Orleans Police Department as well.

On March 26, Scott testified before the Legislature about her encounter with Guice during a high school football game at the Superdome, where she worked as a security guard. She said that Guice told her, “I want you to f*** me,” and repeatedly sexually harassed her. His words still haunted her years later: In fact, she said, no man or child had ever spoken to her with such disrespect.

Part of Scott’s frustration was how LSU handled her reporting of the incident. She told members of the Senate Select Committee on Women and Children that she called the LSU Athletic Department afterward, asking for them to keep Guice out of the Citrus Bowl. She said they refused.

As Scott testified, State Sen. Katrina Jackson, D-Monroe, accused LSU of retaliating against Scott in 2017 “because when you called the reporters, someone from the university told them you were trying to get money.”

“And that’s how they killed the story,” Jackson added.

Scott’s run-in with Guice stems occurred on Dec. 9, 2017. In the weeks afterward, records confirm that she called LSU on several occasions to report his conduct.

“I’m calling because I did not hear anything back from you all concerning him not to play in that Citrus Bowl,” Scott said in a Dec. 19 voicemail to Segar. “I’m going to make a charge on him with the police department and you all will see him on the news, if not today, it will be tomorrow. Because I refuse to let someone disrespect me in that way.”

More details emerged this week in sexual harassments allegations against Derrius Guice during his time with LSU.

Williams, who is not a lawyer, told The Advocate | The Times-Picayune that he got involved as a “family consultant” because he’s friends with Scott’s relatives. Scott also left LSU officials a voicemail in 2017 saying he represented her, and Williams said he was negotiating with LSU in lieu of Scott hiring an attorney.

LSU coach Ed Orgeron said Tuesday morning that he does not remember speaking to Gloria Scott, a 74-year-old who testified Friday that Orgeron …

In a phone call to LSU that month — which school officials recorded — Williams told Segar and LSU Executive Deputy Athletic Director Verge Ausberry that Scott was preparing to go to media outlets with her story unless LSU agreed to either keep Guice out of the Citrus Bowl, or pay up.

Both Segar and Ausberry were recently suspended from LSU over other incidents included in the law firm Husch Blackwell's report, which probed how university officials handled allegations of sexual misconduct over several years. Segar was suspended for 21 days; Ausberry, who returned to work Monday, was suspended for 30 days. Ausberry’s suspension was unrelated to Guice, but Segar’s was related to an error Husch Blackwell identified when she did not include Guice’s name on reports of sexual misconduct.

Gloria Scott was working a football game at the Mercedes-Benz Superdome in 2017, she testified to state lawmakers this week, when a group of m…

On the phone with Williams in 2017, Segar and Ausberry asked him over and over again to say how much money he wanted for Scott, according to the recording. Segar also told Williams multiple times that while she had spoken to Scott, Scott never mentioned money.

“We’re interested in knowing what you think that should be,” Segar said. “And if you talked to Ms. Gloria about this … Because she’s never said a word about this to me about, ‘Pay me to play.’ In fact, she’s only said she doesn’t want him to play.”

Williams asked Segar and Ausberry on the call if they needed to hear from Scott directly.

“It’s not blackmail,” Williams responded. “ … We don’t have to sugarcoat it. It is what it is. Now, in reference to her supporting what I’m saying, that’s not a problem at all. Because I’m not making none of this up, OK? Now, at the end of the day, I expressed the biggest concern: What is the value of Derrius Guice playing in the Citrus Bowl at LSU, ma’am? Then we go from there.”

Ausberry then asked Williams to confirm that he’s an Amateur Athletic Union basketball coach "with Nike," which sponsors some AAU tournaments. Williams said he was.

“Uh-huh,” Ausberry said. “OK, we have a lot of friends that we know at Nike.”

A few minutes later, Williams pitched a payment as a solution that would help all involved.

“What I’m really trying to do, honestly, is protect our brands because guess what? She’s trying on tomorrow to contact the media,” Williams said. “I’m not trying to sugarcoat or s*** on LSU. I’m not trying to do none of that. I’m just trying to resolve it, Verge, and that’s just me. And you already know me. You know my character. This is me.”

Segar closed the door on the possibility of LSU paying and suggested that if Scott had an attorney, he or she should contact LSU’s attorneys.

“Like I said, I’ve talked to her twice,” Segar said. “She’s never said anything about money. LSU is not going to pay money in this situation. I can tell you that.”

“So, you know, it’s unfortunate — the circumstances and all that — it’s just we’re not going to pay money,” Segar said.

As LSU continues to probe how campus officials have handled allegations of sexual misconduct, Associate Dean of Students Jonathan Sanders has …

Scott told The Advocate | The Times-Picayune that she was upset to hear that Williams asked for money on her behalf.

“I don’t see a reason why he asked for money,” Scott said. “I didn’t ask him to ask for money. I never asked him to do anything of that sort, anything concerning money at all. All I wanted was Derrius to not play in that game.”

Segar reported the phone call with Williams to LSU Police, their records show. Williams later texted her saying that he was requesting $100,000 because of the harassment and humiliation Scott endured.

Scott told legislators that she still thinks about her encounter with Guice all the time.

“I think that LSU should be paying for counseling or something like that,” said Morgan Lamandre, the legal director of the Sexual Trauma Awareness and Response center. Lamandre closely followed Scott’s testimony and she also has testified before the legislative committee about LSU’s sexual misconduct scandals.

Furious with LSU’s sexual misconduct scandal, Louisiana lawmakers are heading into the upcoming legislative session with hopes of fixing some …

“It did have an impact on her,” Lamandre said. “I don’t like it when people say, if somebody wants to be compensated for their pain, assume that somebody is lying. That’s a narrative used by perpetrators over the years so that society will doubt victims.”

Monica Beck, an attorney who specializes in Title IX cases for the Fierberg National Law Group, also pointed out that it’s common for victims to receive settlements.

“That might be before litigation is filed, or after,” Beck said. “Civil complainants are absolutely entitled to be compensated for their damages.”

It remains unclear what other avenues LSU took to try to resolve Scott’s complaint. The university’s Student Advocacy and Accountability office — which tracks Title IX and other student disciplinary cases — kept an incident report. Excerpts from the SAA report are included in the Husch Blackwell review, including an allegation that Scott spoke to “the coach at LSU” about what happened with Guice and that he asked if she wanted an apology.

LSU has refused to release the full SAA incident report, saying that while Scott was not an LSU student when she filed the report, the report “pertains to an LSU student record” that cannot be made public. LSU does not release Title IX records and other disciplinary records that identify students.

Guice would have been the student at issue. Contemporaneous newspaper articles show that Guice did not practice with the football team ahead of the 2018 Citrus Bowl around the time that Scott and Williams were calling LSU.

Head football coach Ed Orgeron said then that Guice was not practicing because of an injury.

Scott told the legislative committee, however, that Orgeron had called her to ask her to accept an apology from Guice, saying he was a “troubled child.” She said she refused the apology.

Orgeron had previously denied speaking with Scott. After Scott’s legislative testimony, Orgeron released a statement saying he had no memory of speaking to her.

The committee has requested that Orgeron testify at its next hearing April 8.

Under pressure over LSU scandals, Gov. John Bel Edwards appoints another woman to LSU board