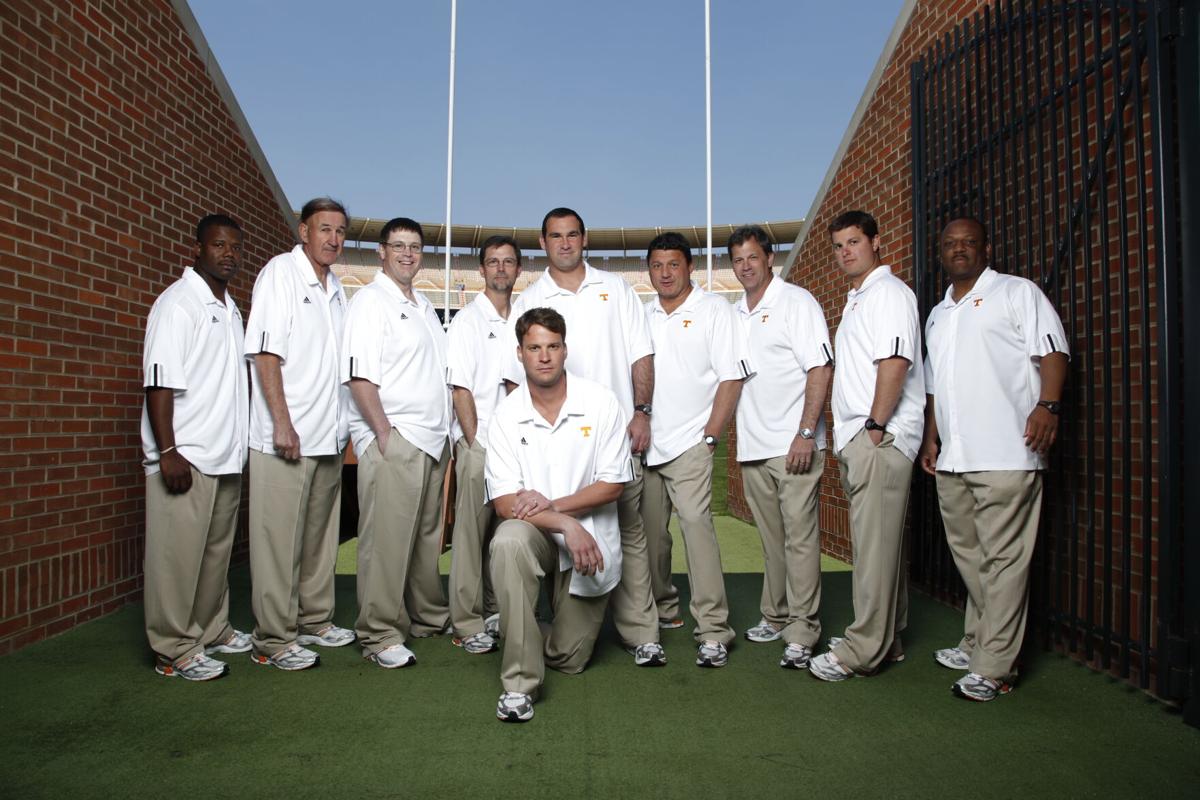 Lane Kiffin (kneeling) and Ed Orgeron (sixth from the left) pose for a group picture of the 2009 Tennessee coaching staff. Kiffin, the head coach, hired Orgeron as his recruiting coordinator and defensive line coach. He trusted Orgeron as second-in-command. 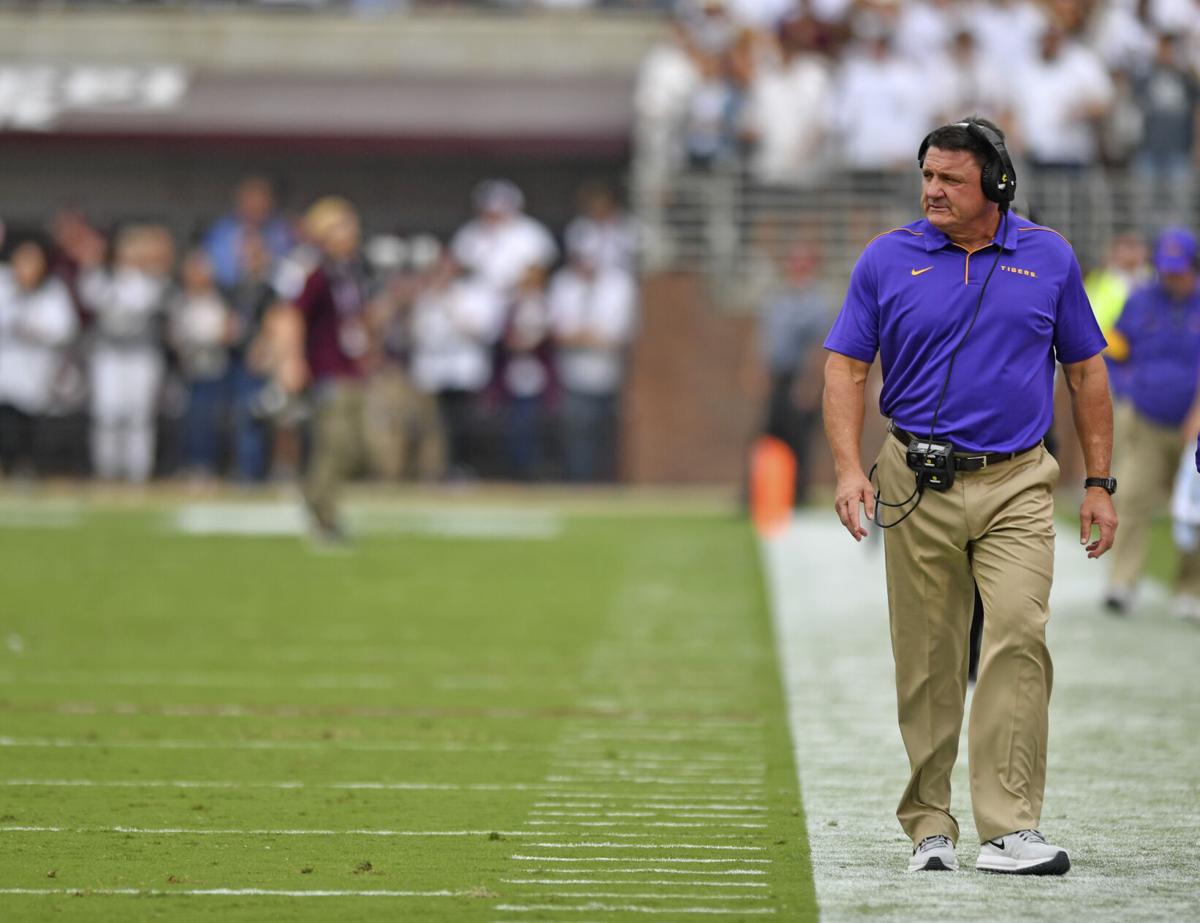 LSU head coach Ed Orgeron on the field in the first half as the Bulldogs host the Tigers, Saturday, October 19, 2019, at Davis Wade Stadium in Starkville, Miss. 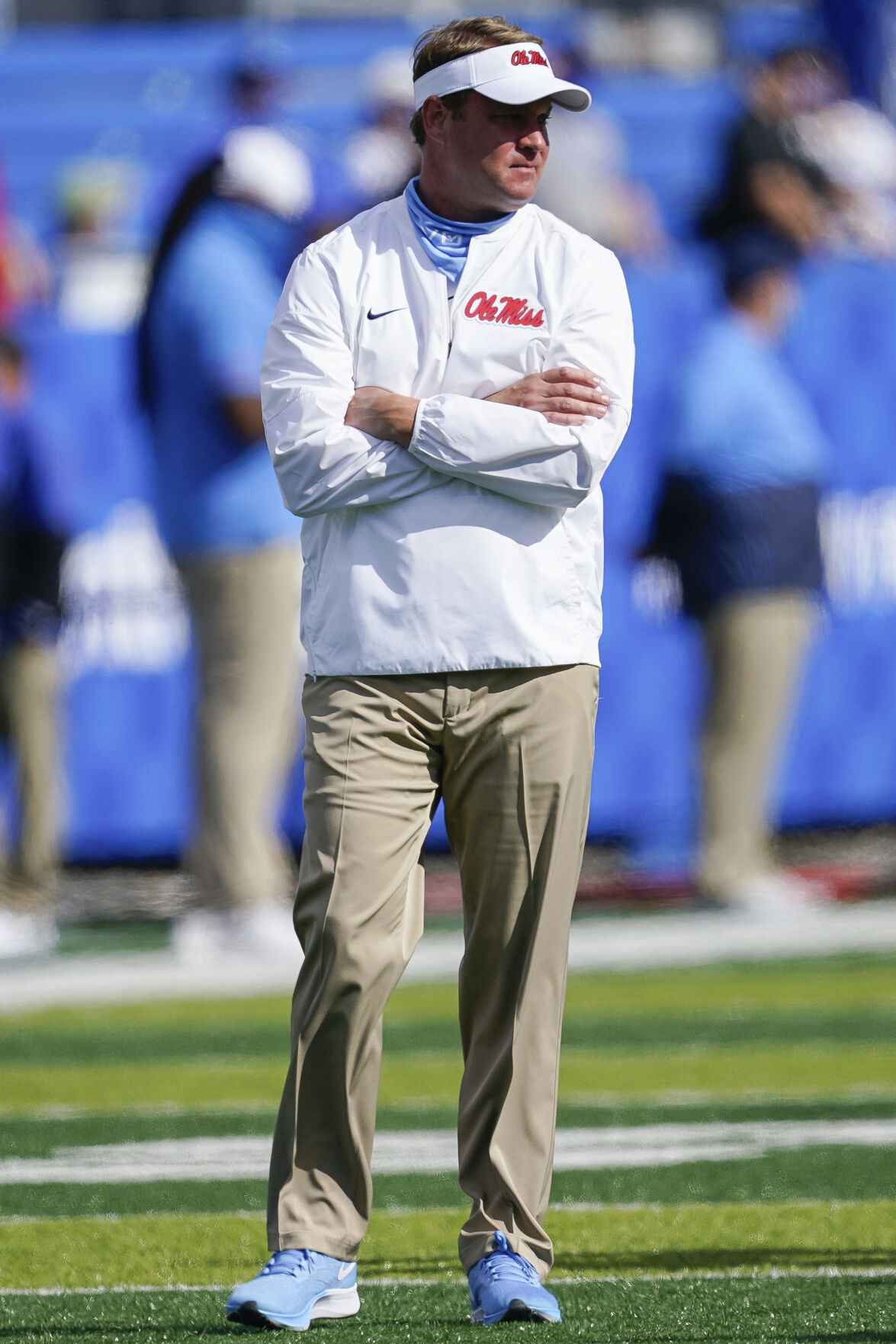 During Ed Orgeron’s interview to become LSU’s head coach, back when he held an interim title in 2016, he presented a projected coaching staff to athletic director Joe Alleva. It included Lane Kiffin as the offensive coordinator.

Kiffin, in the same position at Alabama, was interested in the job. He had known Orgeron for more than a decade, first meeting him as assistants at USC. He respected Orgeron and wanted to help him land his dream gig. LSU’s returning offensive players intrigued him.

As Alleva debated whom to hire, Kiffin called. He said he would come to LSU if the school hired Orgeron and Kiffin didn’t land a head coaching job somewhere else.

“I thought that was a very attractive combination,” Alleva said. “Lane's known for having a great offensive mind. Everywhere he's been, he's had a great offense. Pair him up when we had Dave Aranda, who's a great defensive coordinator. I mean, Lane and Dave and Ed would be a heck of a great combination.”

Though Alleva considered other candidates, reportedly eyeing then-Houston coach Tom Herman, he eventually hired Orgeron. Orgeron believed the call from Kiffin helped seal the offer, and at his opening news conference in November 2016, he thought Kiffin would be his offensive coordinator.

“He was going to come with me when I got the job,” Orgeron said. “If he didn't get a head job, he was going to be my offensive coordinator.”

But Kiffin received a head coaching offer. He had molded Alabama’s offense into a modern spread attack, and the Crimson Tide scored 38.8 points per game. He became a desired candidate, a former head coach with mixed success at three stops who learned from Nick Saban. Florida Atlantic offered Kiffin its job. He accepted.

Four years later, Kiffin acknowledged if FAU hadn’t called him, he would’ve coached at LSU alongside one of his closest friends in the profession. Instead, he spent three years at FAU before becoming the head coach at Ole Miss.

“He did a lot for me in a lot of places,” Kiffin said. “If I could go help him hopefully win some championships there at LSU and that helped him get the job, then that’s probably where I would’ve ended up had I not got FAU.”

It’s almost guaranteed that at some point, every year during the NCAA’s early signing period the subject of in-state recruiting vs. out-of-sta…

Orgeron and Kiffin now face each other as head coaches for the first time this weekend when LSU plays its final game of the season against Ole Miss. Despite different approaches to coaching, Kiffin and Orgeron have developed an almost 20-year friendship that continues to this day. They respect each other's knowledge for the game, helped each other land jobs and often talk about topics that have nothing to do with football.

In some ways, Orgeron and Kiffin’s careers parallel each other. They learned from Pete Carroll, failed in their first opportunities as head coaches and worked until they got another chance, their shared resilience bringing them to their current schools and the matchup Saturday afternoon inside Tiger Stadium.

“They’re totally different,” said Kiffin's father, Monte Kiffin, “but they have so much respect for each other.”

The friendship between Orgeron and Kiffin formed in the early 2000s when they coached together at USC. Orgeron served as the recruiting coordinator, and in 2001, Carroll hired Kiffin to coach tight ends. The staff divided recruiting responsibilities. While most of the coaches received an area inside California to fence the state, Orgeron assigned Kiffin the rest of the country.

Though 14 years separated the men in age and they coached with different styles — Kiffin a calm schemer and Orgeron an energetic motivator — they developed a mutual respect through recruiting. Kiffin landed some of USC’s top recruits, including running back LenDale White and wide receiver Mike Williams, two integral players as USC rose to the top of college football.

Every Friday during the season, the coaches held a session discussing recruits. They sifted through hours of film, debating skill sets and qualities to decide who fit USC’s needs. Coaches defended their recruits with film and analysis. Kiffin and Orgeron directed the sessions.

LSU vs. Ole Miss: Our staff makes its picks for the Tigers' season finale vs. the Rebels

The Advocate's LSU beat team predicts the outcome of the matchup with Ole Miss on Saturday afternoon in Tiger Stadium.

“The two gorillas in the room would be Lane and Ed,” said Tim Davis, the USC offensive line coach from 2002-04. “Both of them knew what type of guy USC needed.”

Respecting his offensive acumen — Orgeron said the game moves in slow motion for Kiffin — Orgeron wanted to hire Kiffin as the coordinator when Orgeron left in 2005 to become the head coach at Ole Miss. Carroll promoted Kiffin to offensive coordinator. According to a Sports Illustrated story, Kiffin’s wife at the time didn’t want to move.

Kiffin wanted Orgeron for his ability to coach the defensive line and recruit. He flew with his father on a private plane to recruit Orgeron, surprising him during a family vacation in Destin, Florida. In Orgeron’s 2020 book "Flip the Script," he said Kiffin extended him $650,000.

LSU also wanted Orgeron. Head coach Les Miles offered him a position, giving Orgeron the chance to coach at his dream school and live near his family. The morning Orgeron left for Tennessee, he texted Miles a number — $900,000 — the same amount he made at Ole Miss, according to his book. Orgeron received Miles’ response after he landed in Knoxville, Tennessee. Miles had met his offer.

“I wanted to back out on Tennessee, but I couldn’t.” Orgeron said in Flip the Script. “I’d given Lane my word.”

Kiffin relied on Orgeron during his lone season at Tennessee. He trusted Orgeron to handle the program when Kiffin conducted interviews, recruited players and dealt with boosters. Kiffin assigned Orgeron to recruit Atlanta and lead the pregame clap sessions, allowing Orgeron to use his unrelenting passion to motivate the team before Kiffin spoke to the players. They balanced each other.

“Lane respects the heck out of Ed,” Monte Kiffin said. “I was defensive coordinator, but Ed Orgeron was Lane’s right-hand guy. Always has been.”

Kiffin and Orgeron instilled belief amongst the players. They oozed confidence. It rubbed off on the players, convincing them they could play any team in the country. The night before Tennessee faced undefeated Alabama, Orgeron asked for everyone’s attention near the end of team meetings. To energize the players, Orgeron picked up a projector and threw it against the wall. The projector shattered.

“Everybody got all fired up, except the video guys,” Monte Kiffin said, laughing. “They had to go pick it up, and it was falling apart.”

Then Kiffin made his speech, telling the players he had told Tennessee they needed an extra night at the team hotel after beating Alabama. Tennessee lost 12-10 when Alabama blocked a potential game-winning field goal, but the players felt capable of winning, a necessary step for rebuilding a program.

The ending of Kiffin and Orgeron’s tenure at Tennessee became messy. Kiffin took the head coaching job at USC, leaving in a manner that upset the Volunteers fanbase. He brought Orgeron with him, and before they left campus, Orgeron called mid-year enrollees they had recruited to Tennessee, trying to convince them to come to USC. Orgeron recognized Kiffin and their staff made mistakes at Tennessee, writing in his book, “there were some things that were out of control.”

LSU may have beaten Florida in stunning fashion last week, but several players either missed the game because of injury or were battered durin…

The timing of the departure hurt Chris Walker, a defensive lineman on that team who now serves as an FCA chaplain at Tennessee, but he understood why Kiffin left. To him, Kiffin and Orgeron had injected cockiness at Tennessee, which finished the season 7-6. For some players, that was the most fun season they had.

Kiffin and Orgeron maintained the same dynamic during their second stint at USC. Coaches met inside a small room at Heritage Hall, gathering around a conference table. Kiffin sat at the head of the table. Orgeron, the defensive coordinator, defensive line coach and recruiting coordinator, sat directly on his right-hand side.

“Ed is the heartbeat of the program,” Kiffin said, according to special-teams coordinator John Baxter.

Orgeron and Kiffin’s career split again when USC fired Kiffin midway through the 2013 season, but they continued to help each other. Orgeron’s stint as interim coach — USC finished 6-2 — proved he had learned from his mistakes at Ole Miss, helping him when he had a chance to land the permanent job at LSU.

Though they didn’t coach together, Orgeron and Kiffin maintained a friendship. Kiffin invited him to the 2015 Sugar Bowl, and they talked a couple times a week when Kiffin was the offensive coordinator at Alabama and Orgeron was the interim coach at LSU.

In a roundabout way, Kiffin and his family even helped Orgeron land the most important recruit of his career: quarterback Joe Burrow.

As Burrow and his family considered schools when he transferred from Ohio State, Burrow’s father, Jimmy, called Monte Kiffin, who joined his son at FAU. Burrow’s father had played cornerback for Monte Kiffin at Nebraska in the 1970s.

“We were thinking about going somewhere else,” Monte Kiffin recalled Burrow’s father saying. “Every time the phone rings, it’s Ed Orgeron calling. What do you think?”

Burrow later signed with LSU. He led the Tigers to an undefeated season and their fourth national championship as he captured the Heisman Trophy.

Orgeron and Kiffin don’t view this game as different from others. To them, it holds no more significance than a typical one between longtime rival schools. Both programs want to end the regular season with a win. Throughout the week, the two coaches expressed their mutual admiration.

"I always respected how he worked and how passionate he was about wherever he was at," Kiffin said.

"I have the utmost respect for Lane," Orgeron said.

Once they met, Orgeron and Kiffin lifted each other throughout their careers, helping each other stay relevant in a profession that churns coaches. They hired each other — or tried to — when they had the chance and confided in one another at times.

Instead of clashing, Orgeron’s passion and Kiffin’s calm demeanor complemented each other. They admired each other’s knowledge of the game, and they played off each other throughout almost nine years coaching together, developing a deep connection that extended past football.

Midway through the 2011 season at USC, Orgeron lost his father, Edward Orgeron Sr. Kiffin organized a private plane to fly Orgeron from Los Angeles to Mandeville.

Orgeron buried his father on a Thursday, two days before USC played rival Notre Dame. Orgeron read the eulogy. He called it the most difficult day of his life to that point.

The plane carried Orgeron to Notre Dame after the funeral. USC won 31-17. After the win, Kiffin gave Orgeron the game ball.

“I'll never forget that," Orgeron said. "That made us more than a couple of coaches. That was a friendship that will last forever.”

So many memorable LSU-Ole Miss games over the years; here is our list of the best five

There isn't another LSU rivalry filled with more memorable games than the Tigers' series with Ole Miss. The ancient rivalry stretches back to …