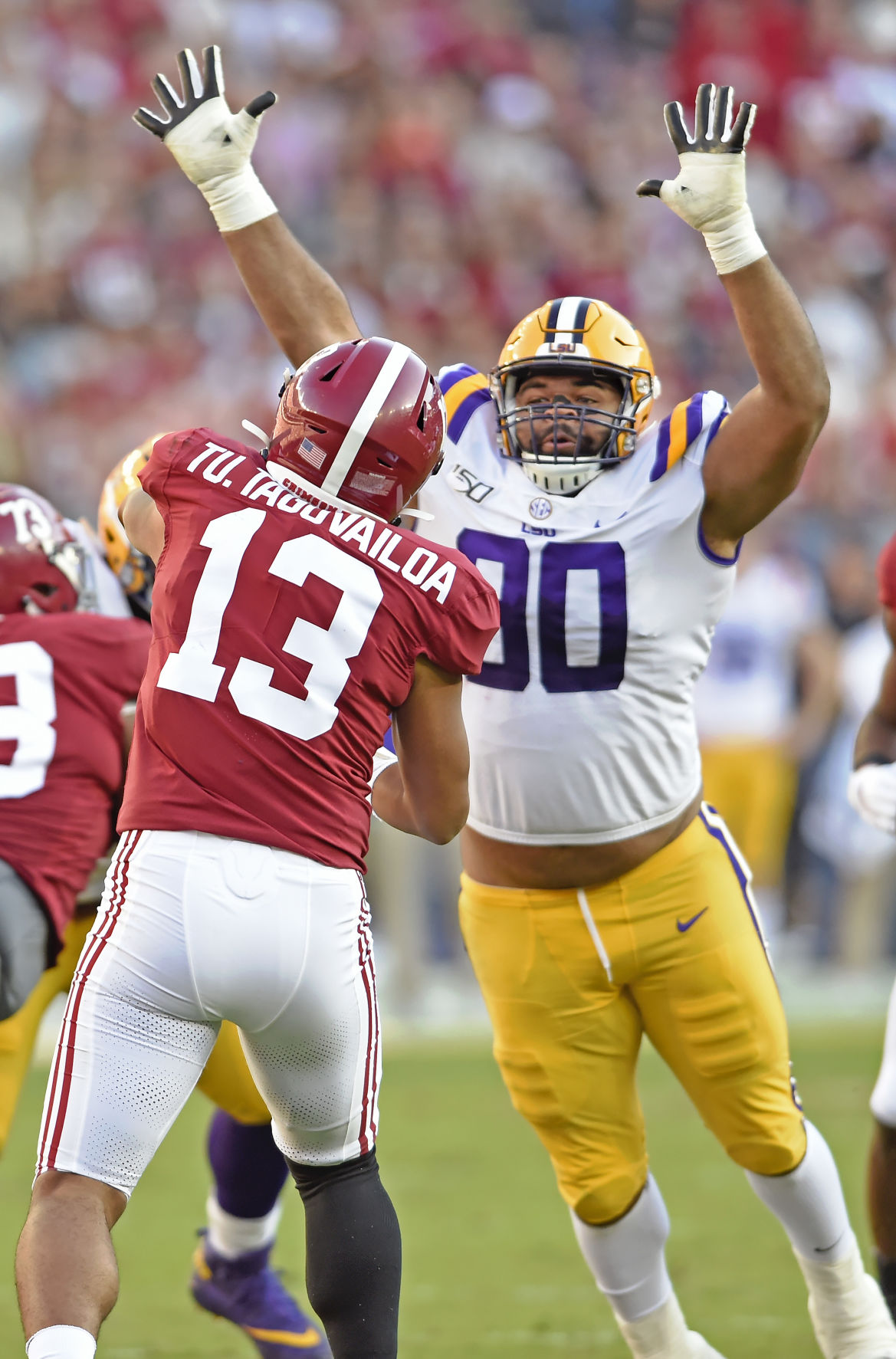 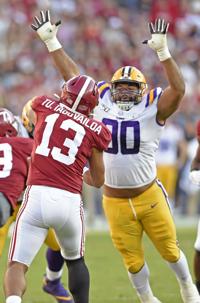 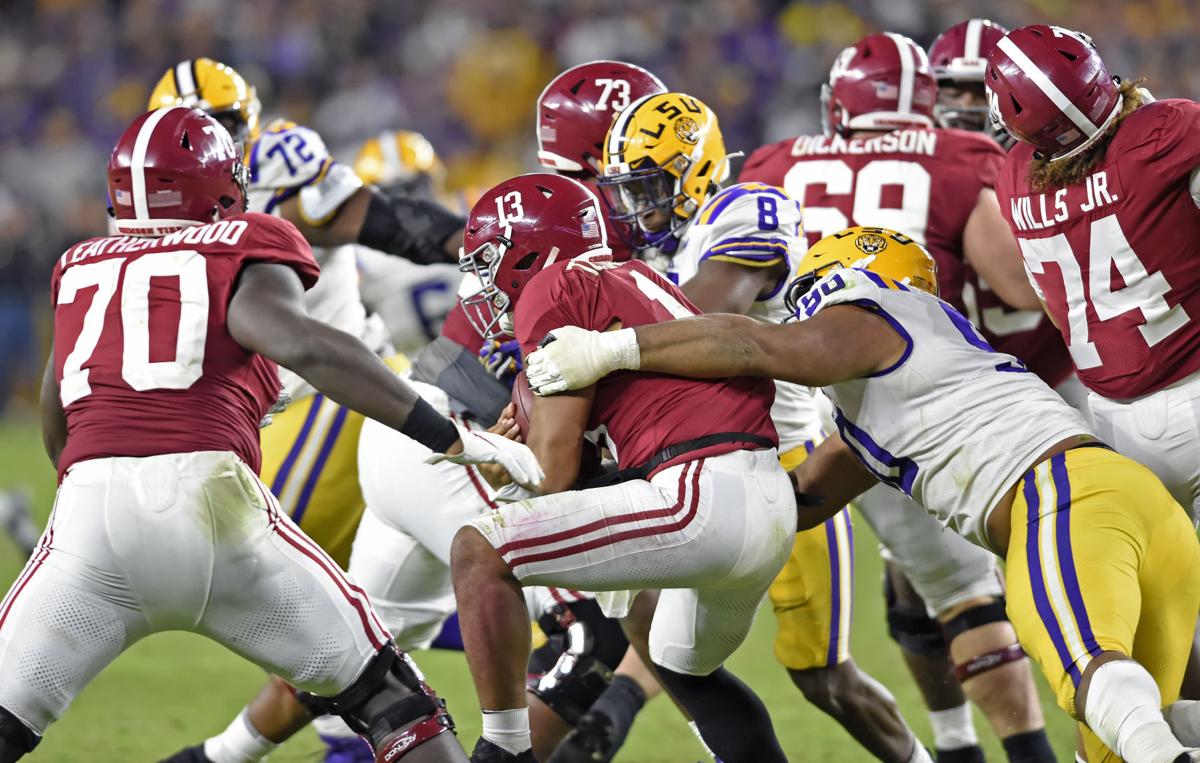 LSU linebacker Patrick Queen (8) and LSU defensive lineman Rashard Lawrence (90) combine for the sack of Alabama quarterback Tua Tagovailoa (13) during the second half of LSU's football game against Alabama at Bryant-Denny Stadium on Saturday Nov. 9, 2019, in Tuscaloosa, Ala. LSU won 46-41.

LSU linebacker Patrick Queen (8) and LSU defensive lineman Rashard Lawrence (90) combine for the sack of Alabama quarterback Tua Tagovailoa (13) during the second half of LSU's football game against Alabama at Bryant-Denny Stadium on Saturday Nov. 9, 2019, in Tuscaloosa, Ala. LSU won 46-41.

Her son, senior defensive lineman Rashard Lawrence, stood on the field after his best game of the season, separated from his mom by concrete stands and barriers. He walked past the celebrations of giddy teammates and coaches.

Rabalais: 'Alabama is way more in this than a lot of people recognize' ESPN expert says

Back in the BCS era, when a complex yet well-defined formula of computer rankings and human polls determined the national championship, trying…

Lawrence stopped near the gate surrounding the field inside Bryant-Denny Stadium. He cupped his right hand above his eyes, shielding glare from the overhead lights. He scanned the crowd. He did not see his mom. He asked for help.

Someone tracked down Agnes, and she ran back inside the stadium. When Lawrence and his mom found each other, they leaned over the metal fence. They pulled each other close. Tears dripped from their eyes. Their hug lasted a minute, maybe two, the kind of embrace that made them forget how much time had passed or that anything else mattered.

When Lawrence came to LSU, he wanted to win championships. He felt close some years. Others, not at all. The lack of team success frustrated him. He told his mom he wanted to beat Alabama at least once before he left school. This year, he believed LSU had the team to do it.

The season had not begun like Lawrence expected. He returned for his senior year to raise his draft stock, compete for championships and earn his degree. But he missed spring practice following surgery on his right knee. Cautious with his recovery, LSU gave him days off in preseason camp.

Then, during LSU’s second game of the year, a teammate rolled over Lawrence’s ankle. Agnes watched from the upper deck at Texas. She saw a player sitting on the field surrounded by athletic trainers. She didn’t know it was her son until he limped across the turf.

Gone are the days with the Saints as Louisiana's highest-flying offense, and Drew Brees has taken notice.

Lawrence missed the next month. He felt depressed and frustrated. He talked to his mom every day for hours at a time. Agnes told her son to lean on his faith. She encouraged him to thank God for everything he still had — school, life, the ability to work — as she lifted her son throughout his rehab.

Though he didn’t know it, Lawrence’s injury affected his mom. She had taught him to remain strong through adversity, supporting Lawrence no matter what she went through in her personal life. She did not tell him how much stress she felt worrying about her boy, the one who entered the season saying, “This is my year.”

One night about two weeks ago, though Lawrence had returned to the field, Agnes felt pain in her chest. She thought she might have a heart attack. The pain never increased, but she decided if she felt worse in the morning, she would go to the doctor. She asked God for help removing her pain and stress. She never told her son.

“I was heartbroken,” Agnes said, “and the stress got right there.”

Agnes relaxed with prayer, and Lawrence settled back into practices. He regained his place in the starting lineup. He credited his mom for helping him return to the field after two injuries threatened his success.

“She's a strong individual,” Lawrence said, adding how much he loves her macaroni and cheese. “She's very supportive. She knows when to get on my butt when she knows I'm not doing right. She's just an overall great woman.”

Lawrence played his best game of the season against the Crimson Tide. Considering the circumstances, it may have been one of the best performances of his career. LSU had lost eight straight games to Alabama. The winner took control of the Southeastern Conference and the rivalry.

Near LSU’s band, Lawrence’s mom watched the game with two relatives. She cried for most of it, spilling tears of joy as her son accomplished something he had wanted for so long.

When Agnes ran back into the stadium and reached the fence, she did not see Lawrence. She asked Mike the Tiger to find him. Soon, the LSU mascot told Lawrence where his mom stood. Lawrence walked toward her, and they cried together, their faces buried in each other’s arms.

“She's been with me through it all,” Lawrence said. “I wanted to see her. She means the world to me.”

Driving home that night, Agnes felt relief — as if a weight had lifted from her shoulders. She cried happily as she rode through Alabama. She has smiled all week. She hasn't felt stress.

Lawrence played one of his best games in a pivotal matchup, helping catapult LSU toward the championship he has always wanted. He and his mom will never forget the hug they shared across that fence. For her, it felt like renewal.

When LSU takes the field against Ole Miss this weekend, it'll be without at least one of its starting offensive lineman.

LSU running back Clyde Edwards-Helaire has been named one of four finalists for the Paul Hornung Award, given annually to the most versatile p…