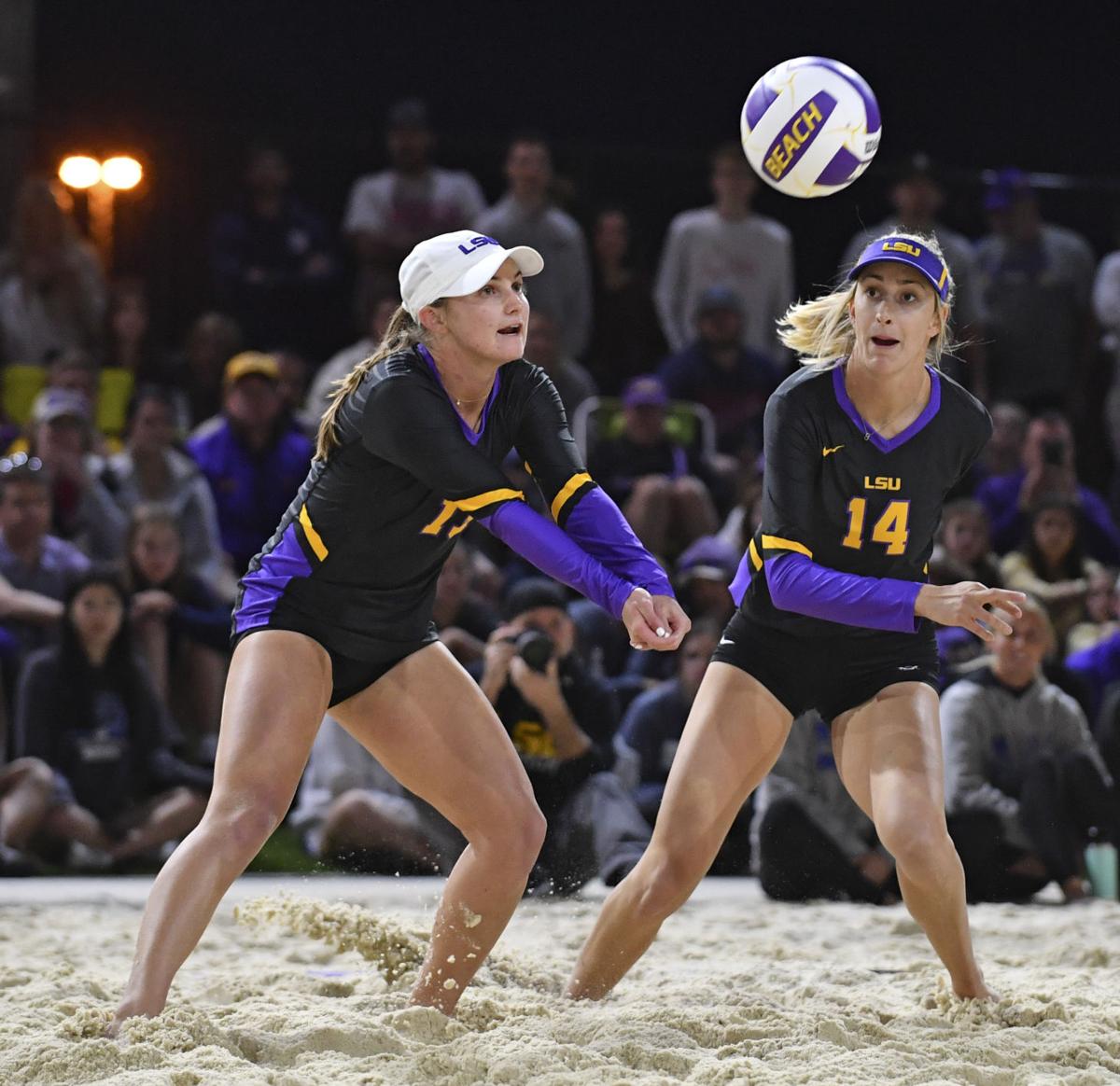 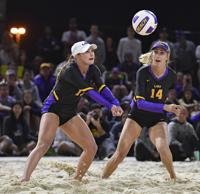 LSU's Kristen Nuss (13) receives the ball alongside LSU's Claire Coppola (14) in a match against UCLA during the Tiger Beach Challenge, Saturday, Feb. 29, 2020 at the LSU Beach Volleyball Stadium. 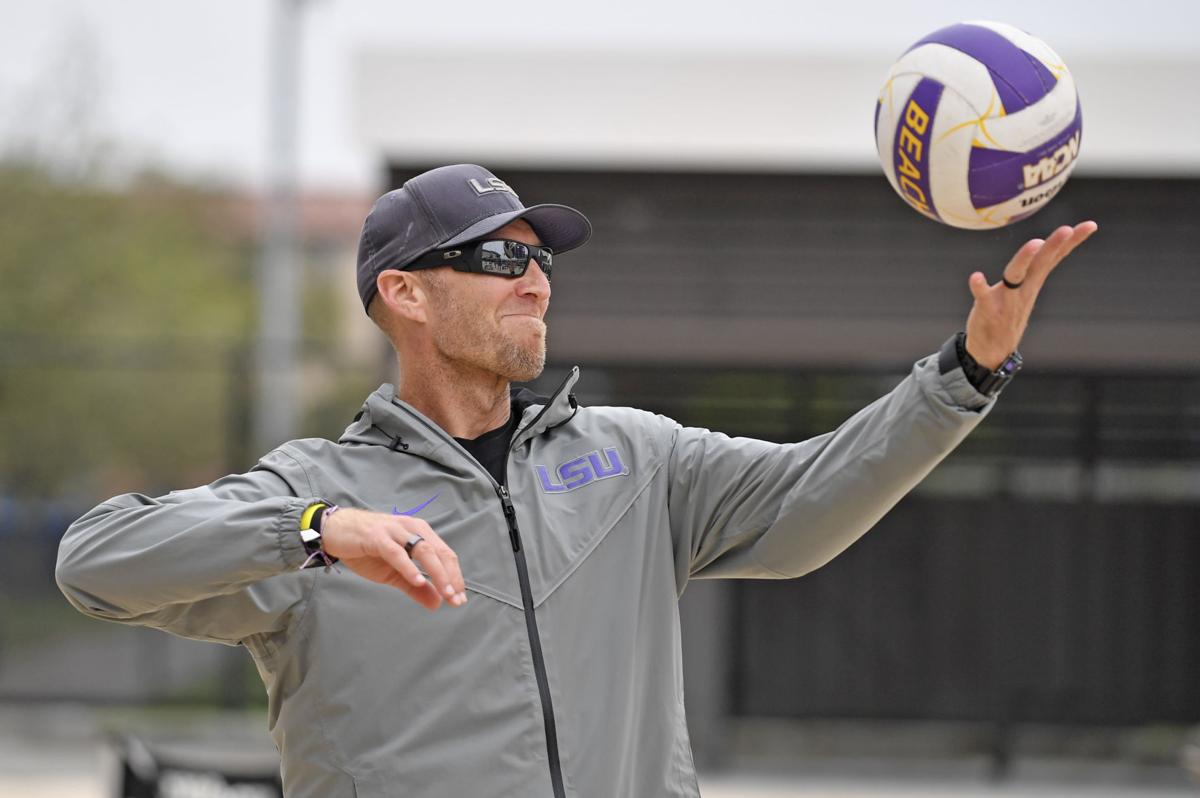 LSU's Kristen Nuss (13) receives the ball alongside LSU's Claire Coppola (14) in a match against UCLA during the Tiger Beach Challenge, Saturday, Feb. 29, 2020 at the LSU Beach Volleyball Stadium.

This was the season Russell Brock always pointed to for LSU beach volleyball.

The 2020 campaign was year seven for the program, the year he figured the start-from-scratch sport would reach maturity and be in position to be a national contender.

Turned out Brock was right on the mark. After two early victories over preseason No. 1 and reigning NCAA beach volleyball champion UCLA, the Tigers climbed to No. 1 themselves.

But dreams of a breakthrough national championship, the chance to become the first team other than UCLA or Southern California to win the title since the NCAA began recognizing the sport in 2016, will remain dreams deferred.

Like all other sports, the one thing LSU couldn’t overcome was the coronavirus pandemic. The Tigers’ season ended March 7 with a victory in the Fight in the Fort tournament in Fort Worth, Texas, to finish 12-2.

Initial hopes college sports might merely be paused quickly gave way to a formal cancellation of the first NCAA championship then, officially, the regular season. Brock and his players are left with the thoughts of what might have been, but he said it’s important to consider the big picture.

“Obviously we finished way sooner than we hoped to with everything on track the way we hoped it would be,” Brock said. “The biggest concern now is keeping the kids healthy and being able to continue to move (the program) forward. But we’re sensitive to the challenge everyone is facing now.”

Shut down: How LSU sports was put on hold amid coronavirus concerns, what comes next

Years ago, I sat down to interview late LSU women’s basketball coach Sue Gunter. Gunter had enough highs and achievements in her career to eventually earn enshrinement in the Naismith Basketball Hall of Fame. But she was denied a chance to coach the 1980 U.S. Olympic team when then President Jimmy Carter decided the United States would boycott the Moscow Games because of the Soviet Union’s invasion of Afghanistan.

Gunter never got a chance to be the U.S. Olympic coach again, but her initial disappointment never turned to bitterness. Like Gunter, I asked Brock if he felt cheated somehow, but his answer was much the same.

“I think that would be an easy place to go,” he said, “but we’re all in the same boat. All our programs — like men’s and women’s track and field both being ranked No. 1 and softball — were on a roll. Baseball was in a good place. Ingrid Lindblad on the women’s golf team was ranked No. 1 in the country (at one point).

“A lot of us had that anticipation and hope. But it’s not just our university, it’s every university. A lot of programs were in a position to be successful. To look at it only from our perspective is shortsighted and selfish.”

There is pride in the few accomplishments the Tigers got to record. Seniors Kristen Nuss, of New Orleans, and Claire Coppola, LSU’s No. 1 duo, became just the third pair in NCAA history to reach 100 career wins. And the sport seemed to catch on with LSU fans, as 2,407 of them somehow packed the LSU Beach Volleyball Stadium (formerly the W.T. “Dub” Robinson Tennis Stadium) on Feb. 29 for the Tigers’ 3-2 win over UCLA.

“You can’t take away what we did,” Brock said. “When the final (coaches’) poll came out we were still No. 1. There’s still great value and pride in what we did and you can’t take that lightly, even if we didn’t get to complete what we started.”

Whether LSU can continue to build its program when the games resume with Nuss, Coppola and the Tigers’ three other seniors remains to be seen.

As a spring sport, LSU beach volleyball players can benefit from the NCAA’s decision to grant another year of eligibility to make up for the one cut short. But Brock said the issue is a complex one.

“The decision will be on their end whether to come back and play,” Brock said. “Several have jobs lined up. And from a budgetary standpoint, there’s a lot left to be unraveled.”

For now, the sand courts are silent. The volleyballs put away. LSU’s team, with players from seven states besides Louisiana and the school switched to online classes, is scattered all over the map, most of them back home.

But one day the games will resume. And the LSU beach volleyball program will try to continue what at one time seemed like an inexorable climb to the top.

“We reached a peak, but we’re not done,” Brock said. “We’re still building.”

Uncertain meetings and lost hope: Inside the final 48 hours of LSU's baseball season

In the span of 48 hours, LSU went from taking pregame batting practice to holding its final team meeting over a conference call as coronavirus halted the Tigers' season.