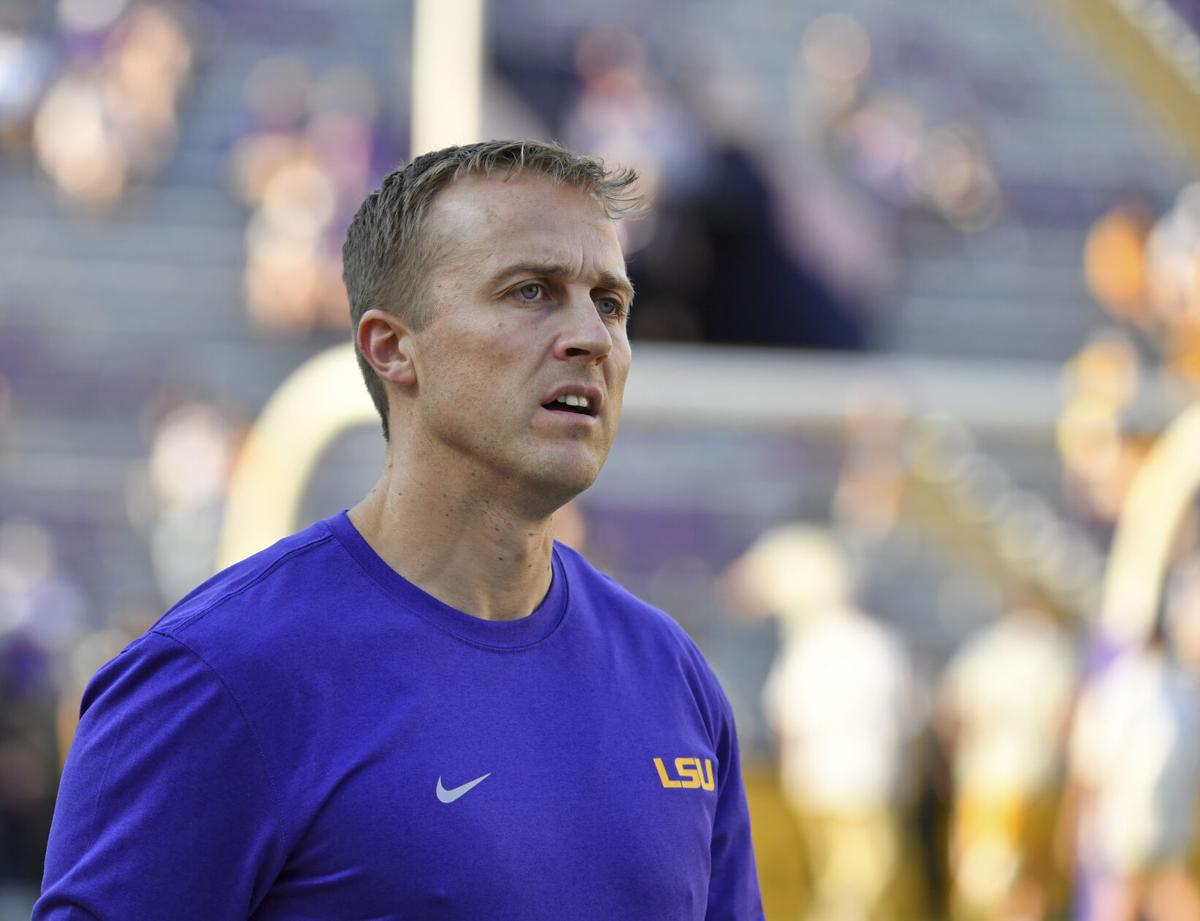 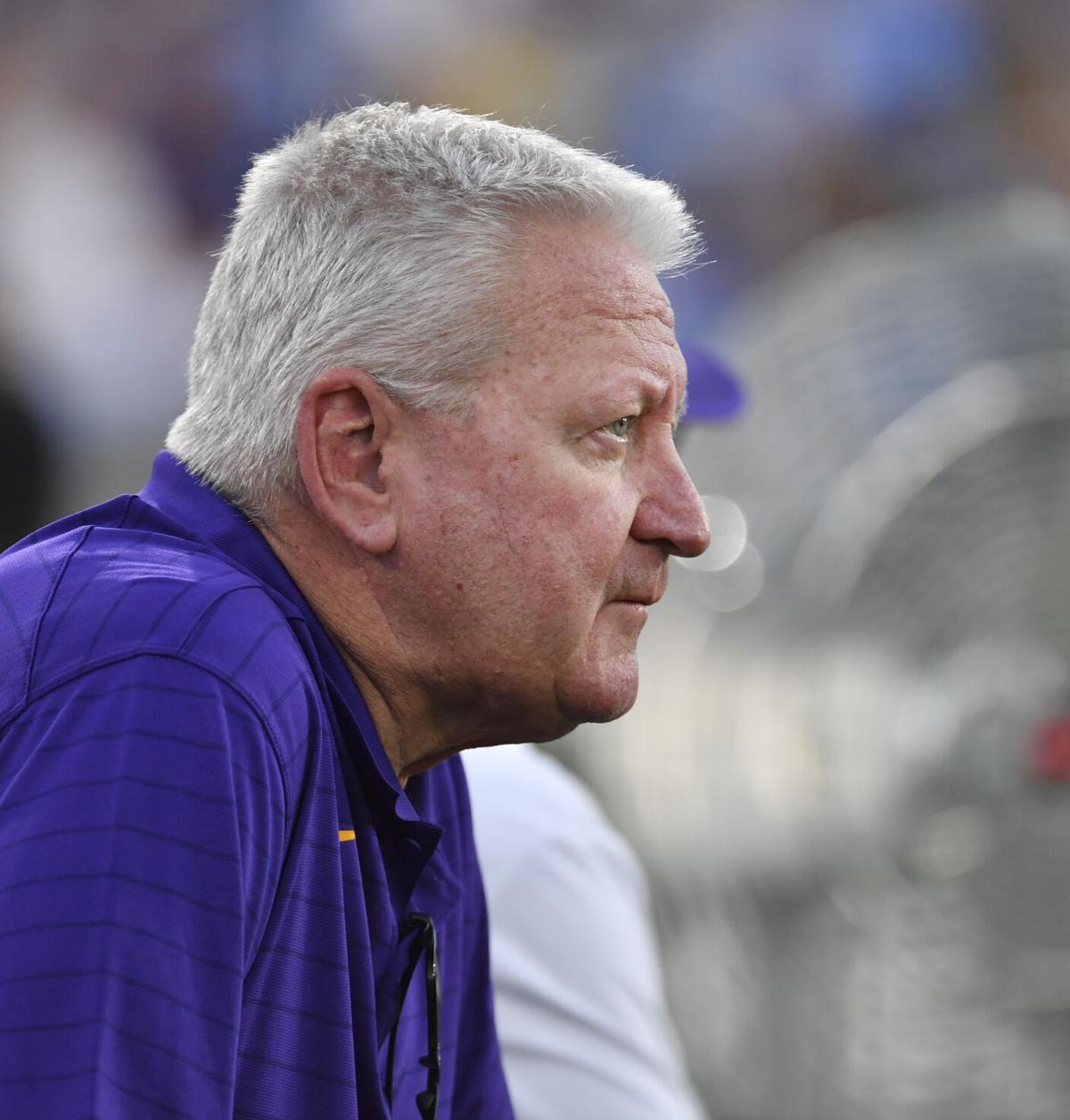 Current LSU analyst and former offensive coordinator Steve Ensminger on the field in the first half against UCLA, Saturday, September 4, 2021, at the Rose Bowl in Pasadena, Calif.

Current LSU analyst and former offensive coordinator Steve Ensminger on the field in the first half against UCLA, Saturday, September 4, 2021, at the Rose Bowl in Pasadena, Calif.

New offensive coordinator Jake Peetz’s tenure at LSU through the first five games has been composed largely of the hard lessons of on-the-job training.

More to the point, it has been a baptism by fire.

There are strong headwinds pushing against LSU’s offense, starting with the Tigers' inability to block up front. Blame the summertime change from O-line coach James Cregg (fired for alleged NCAA recruiting violations) to Brad Davis. Blame the lack of a Leonard Fournette or Kevin Faulk-like running back talent in Faulk’s stable as running backs coach.

But Peetz’s performance as LSU’s play-caller isn’t helping. The Tigers struggle to find rhythm and tempo in their offense as Peetz hunts down after down for the perfect play to unleash on opposing defenses.

All too often, instead of catching defenses off balance, LSU is burning down the play clock or even worse, being forced to burn timeouts.

“The play-call was in late,” Orgeron said after Saturday’s come-from-ahead 24-19 loss to Auburn regarding one of those aforementioned situations. “Then we tried to change it at the line of scrimmage, and we just weren’t well-organized.”

The worst lack of organization came when after Auburn scored the winning touchdown with 3:11 left to play, LSU was forced to call timeout to start the drive to avoid a delay of game penalty. A timeout the Tigers may have sorely needed on the drive that ultimately ended in a Max Johnson fourth-down interception.

Some will of course question Johnson, who basically defaulted into the starting job after Myles Brennan broke his left (non-throwing) arm during a freak preseason non-football accident. But Johnson is often running for his life to get off passes or handing off to running backs who are quickly running into stone walls. He’s second in the Southeastern Conference with 16 touchdown passes against just four interceptions. He’s doing the best he can.

Why did LSU rotate players more against Auburn? Fatigue prevention and injuries

Saturday night, Johnson politely but clearly expressed his frustration with the offensive play calling, too.

“I think we need to pick up some tempo,” Johnson said. “Figure out our run game. Other than that, we have to figure out how to win, score touchdowns instead of field goals.”

And Peetz has to figure out how to call a good play and stick with it more often. Yes, there were plenty of check-with-me situations when Joe Burrow was throwing for a billion yards in 2019, but the whole process had much more alacrity then.

“There’s one play being called,” Johnson said, “then based on their coverage we’re calling a different play. I’m getting that play with five seconds or so and I’m trying to change the protection. We have to burn a time out because of that.”

It sure looks like LSU could use Ensminger’s input once again. He answered Orgeron’s call to be interim offensive coordinator when Les Miles was fired four games into the 2016 season and Cam Cameron was sent packing with him. He stepped back to the tight end coach’s role in 2017 when Orgeron hired Matt Canada — a one-year tenure that made a spectacular splash and a spectacular crash — then took over again from 2018-20 before stepping back into an analyst’s role going into this season.

Say this about Ensminger’s play-calling: the trains ran on time. The Tigers played with tempo and got the plays in speedily. Ensminger had the strength of his convictions as a play-caller, something Peetz apparently is lacking. Orgeron has more than once expressed his frustrations about lack of tempo. One can only assume Peetz is hunting for the perfect play and changing them so late because he lacks confidence in the play he picks to start.

Though we’ve seen schools change assistant coaches already in the SEC this season — Auburn fired its receivers coach before the LSU game and Missouri fired its defensive line coach this week — there’s no indication Orgeron is considering demoting Peetz and bringing Ensminger back as play-caller or anything like that. But Orgeron said Monday he is considering having Ensminger at least coach the coach if you will, possibly even being in the booth with Peetz in the future.

“That's a thought,” Coach O said. “That has been considered. I think Steve is enjoying his retirement. He does come (to games) as a consultant. Maybe he will come in the box. Might be something I'll talk to him about.”

It’s hard to imagine LSU’s offensive line getting appreciably better. Or its running game. It is becoming more and more apparent Orgeron will have to do something regarding his offensive coordinator situation.

After the 2020 season, coach Ed Orgeron prioritized re-recruiting players who had the option to turn pro, particularly on the offensive line. …