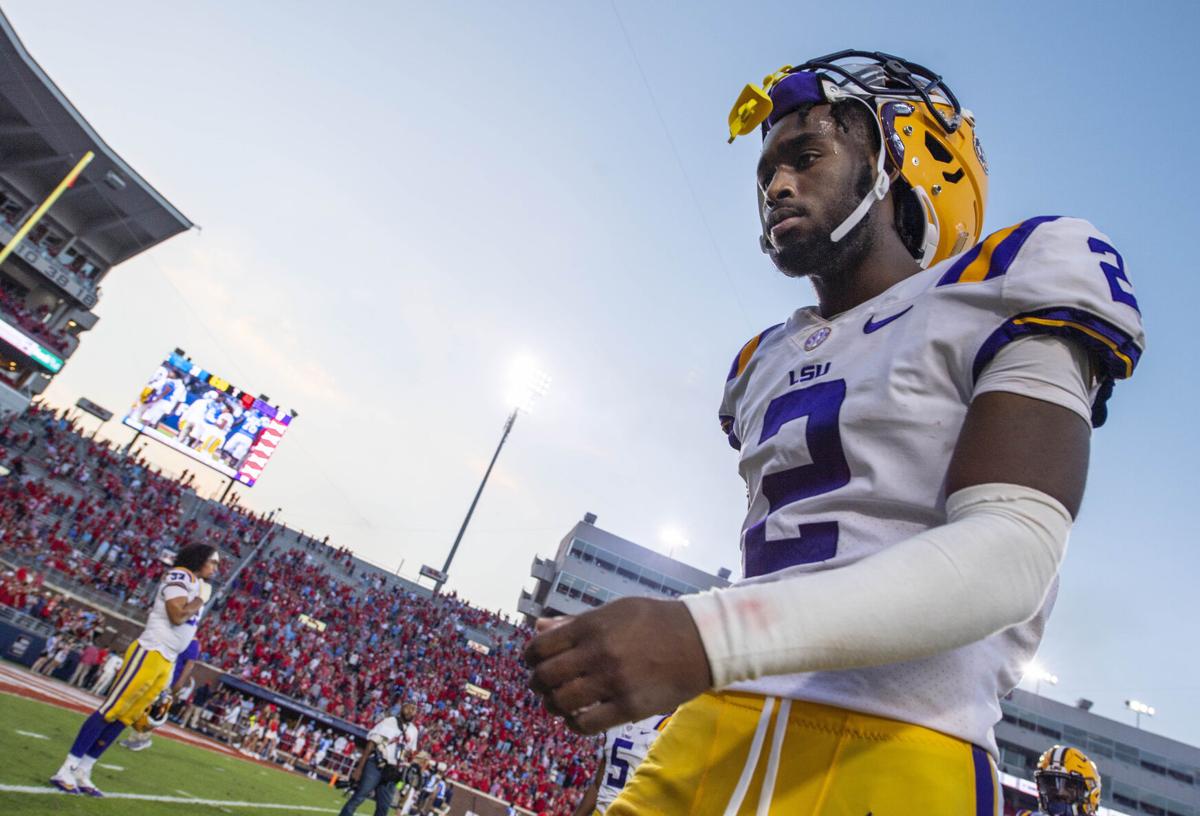 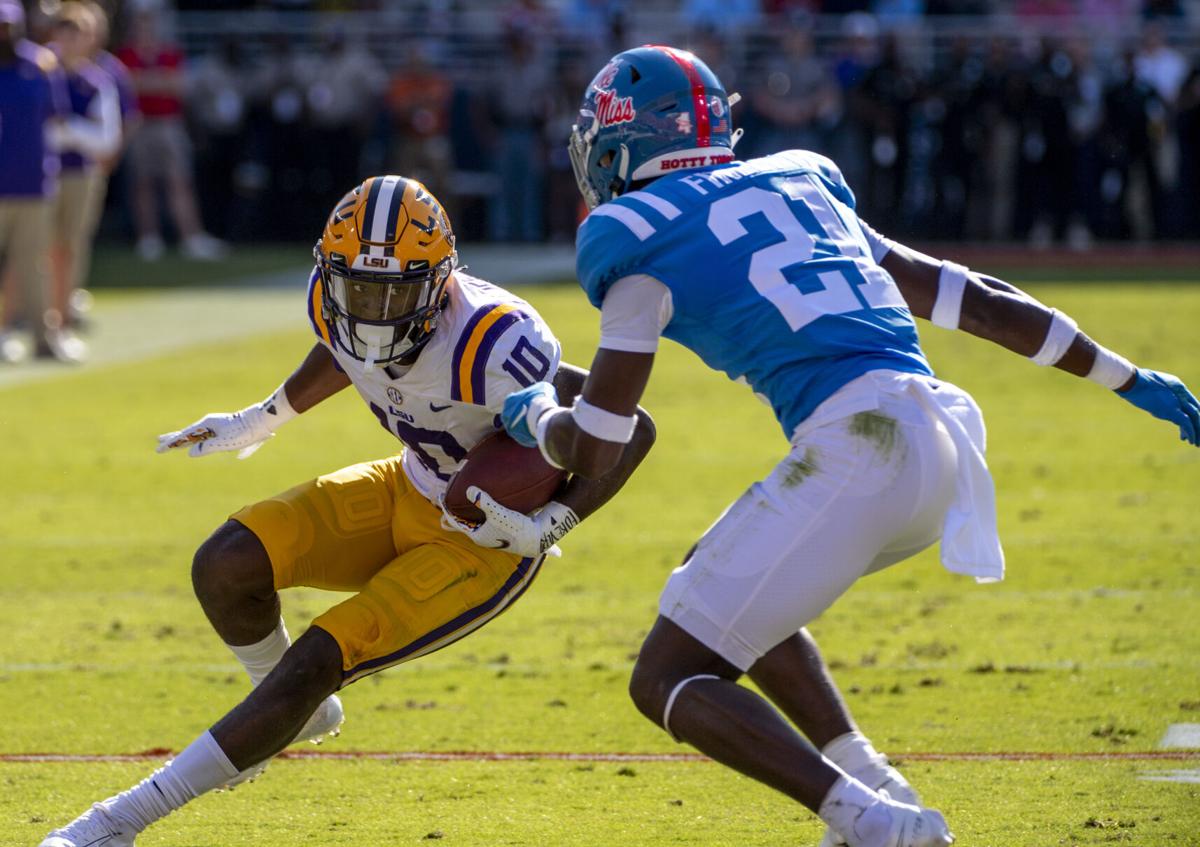 LSU wide receiver Jaray Jenkins (10) tries to evade Mississippi defensive back AJ Finley (21) on the play during the first half at Vaught-Hemingway Stadium Saturday Oct. 23, 2021, in Oxford, Miss.

LSU wide receiver Jaray Jenkins (10) tries to evade Mississippi defensive back AJ Finley (21) on the play during the first half at Vaught-Hemingway Stadium Saturday Oct. 23, 2021, in Oxford, Miss.

OXFORD, Miss. — No doubt there were champagne toasts to Ole Miss great Eli Manning at the well-heeled Woodstock of tailgating known as The Grove.

Saturday was Manning’s day as Ole Miss retired his number, painted the Manning name in both end zones, and no doubt tried to impress the hell out of his nephew — Newman quarterback Arch Manning, who was here on a recruiting visit.

Of course, the school still hasn’t retired that “SEC West Champions ‘03” sign on the south façade of Vaught-Hemingway Stadium. You know, that year Eli and Ole Miss LOST to LSU 17-14 here, giving the Rebels a share of the SEC West title with LSU but no more? A couple of months later, the Tigers were toasting their national championship in Manning’s native New Orleans with a BCS championship Sugar Bowl win over Oklahoma.

There was so much faded glory on display here Saturday, nothing more obvious than the LSU giant that has atrophied before our eyes less than two years after winning a national championship. The fizz from LSU's reinvigorating 49-42 upset win over Florida the previous Saturday quickly fell flat. The Tigers started strong but were helpless to keep pace as the Rebels pulled away for a 31-17 victory that was not really that close.

OXFORD, Miss. — The coach with nothing left to lose knew he needed to score points whenever possible, so Ed Orgeron raised his right hand and …

The LSU offensive line that pancaked the Gators and opened up moving van-sized holes for Tyrion Davis-Price last week? It looked like the shaky line from earlier this season, unable to counter with counter plays against what previously had been a pretty mediocre Ole Miss defensive front. The ground game barely registered a blip, totaling 77 yards. The Rebels harassed quarterback Max Johnson, too. He got hit and fumbled twice as passing pockets collapsed around him before Garrett Nussmeier came on in relief in the fourth quarter.

LSU’s defense? Well, for all the good cheer from the Florida game, the fact remains that this bunch did give up 42 points in back-to-back games against Kentucky and the Gators. And the Tigers have surrendered an average of 474 yards per game against their Power Five opponents, barely better than the 492 yards per game LSU surrendered in 2020's 10-game SEC-only schedule that got Bo Pelini fired. The Tigers bottled up the Rebels early, forcing Ole Miss to punt on its first two possessions while playing good pass defense and getting good pressure on Matt Corral. But Ole Miss coach Lane Kiffin started fiddling with knobs and twisting dials and soon had the Tigers on their heels, ripping off huge chunks of yardage.

Ole Miss scored on its last three possessions of the first half and its first drive of the third quarter — field goal, touchdown, touchdown, touchdown — to take a 24-7 lead. LSU looked like it had enough. Some of the Tigers' defenders — save for senior linebacker Damone Clark, who bravely logged another double-digit tackle day with 20 stops — were grabbing and waving at Ole Miss ball carriers as they sailed past.

Three and out: Sports columnist Scott Rabalais breaks down the LSU-Ole Miss game in sunny Oxford

I expected the Tigers would open the Ed Orgeron Farewell Tour with a spirited effort. LSU has a lot of experience in firing coaches — five of the past six, actually — and in the past the Tigers played free and flexed their ever-present talent with the heat off.

That didn’t happen Saturday. As Ole Miss rallied, LSU wilted. It leaves you wondering how the Tigers will respond during a quartet of November games, mostly against quality opponents such as Alabama, Arkansas and Texas A&M, when the adversity hits and they have to respond. They may be asking themselves deep down, “For what? So we can finish 6-6 and go to the Birmingham Bowl?”

"I have no question this team will fight to the end," Orgeron said.

Positive words, but it's hard to be positive that they will prove to be true.

As for the Kiffin quotient, he managed to draw some of the attention to himself on Eli Manning Day by strutting into Vaught-Hemingway Stadium before the game wearing a No. 10 powder blue (sissy blue?) Manning replica jersey. At halftime, he ditched the white windbreaker for a powder/sissy blue shirt. More importantly, Kiffin showed why he is considered a contender for the LSU job, displaying a brilliant arsenal of play calling, formations and schemes.

Left tackle Cameron Wire out for LSU vs. Ole Miss; see who traveled

Was that coaching? You have to say yes. The question for LSU athletic director Scott Woodward will not be whether he can outbid Ole Miss for Kiffin if he wants him — LSU is likely to drop a bank on Orgeron’s successor. The question will be whether he and LSU want to put up with the antics, the circus, the distractions and delights that are uniquely Kiffin.

That is up for debate. What isn’t debatable is the fact on this Saturday, LSU and Ole Miss looked like ships sailing in opposite directions.

Deep into the second quarter Saturday afternoon, LSU led No. 12 Ole Miss and looked to upset a ranked opponent for the second straight week wi…