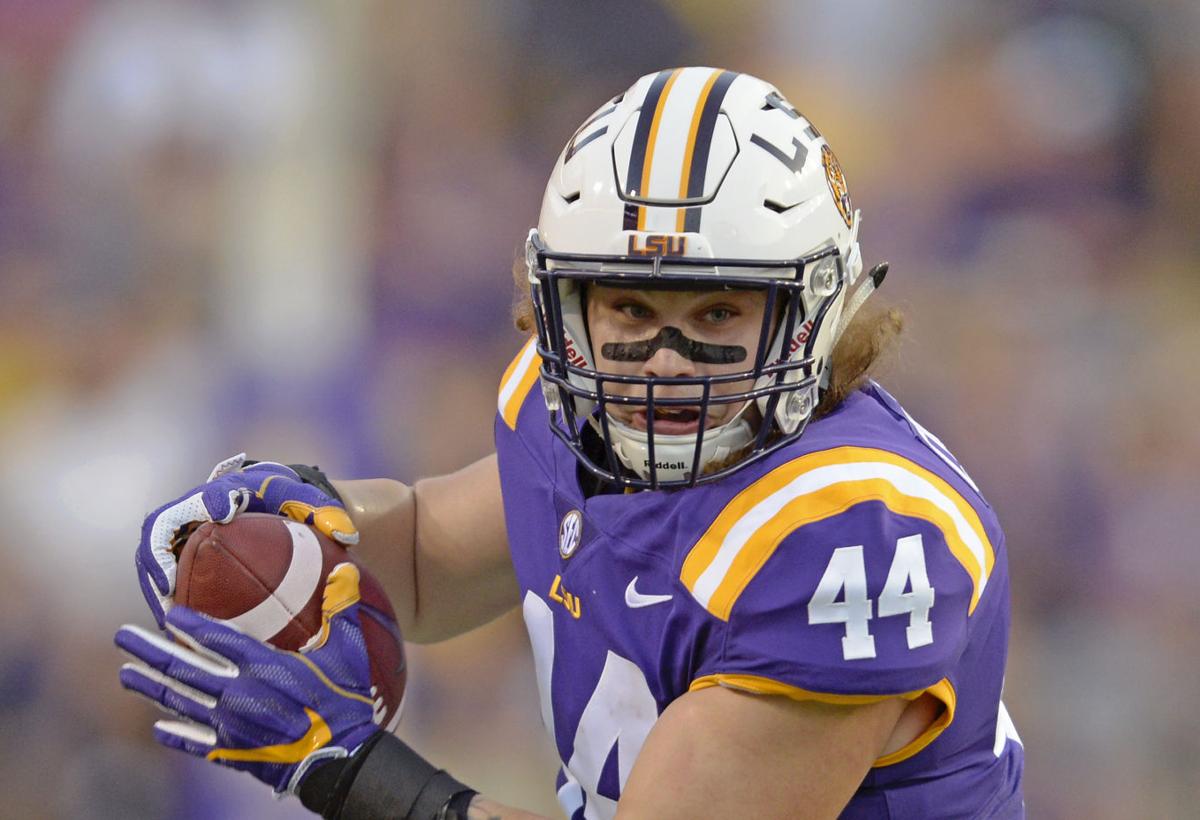 LSU fullback Tory Carter (44) pulls in a pass during the first half of LSU's football game against Troy Saturday Sept. 30, 2017, in Baton Rouge, La.. 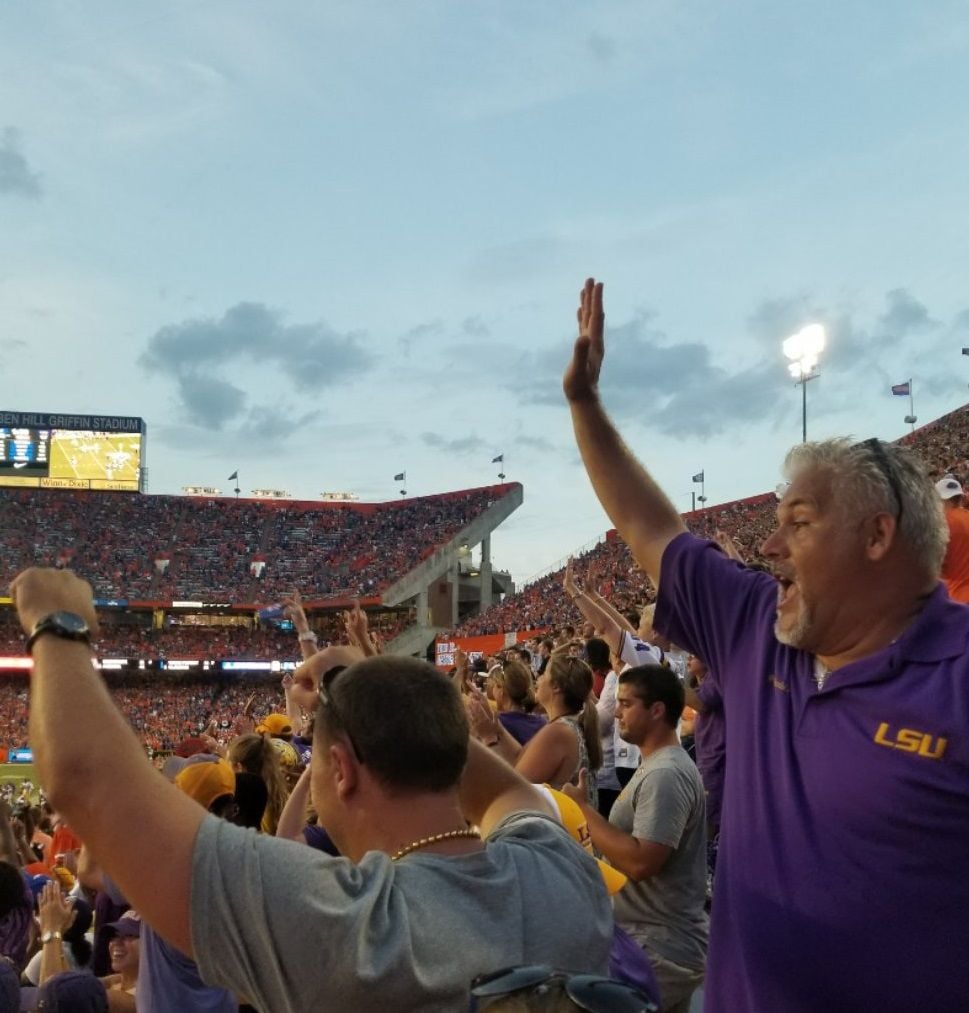 When Tory Carter flexes, you can see it.

The four letters — GATA — are in ink scrawled across his biceps. It’s his family motto, one commissioned by a football-playing father who reared this hard-nosed fullback of a son.

James Carter has a matching tattoo — GATA, it says across the inside of his left biceps, an acronym that stands for Get After That …

The last word is not fit for print.

“That’s our motto I’ve taught all my kids,” James said. “You want to be good or great, you have to get after it.”

The slogan is what got Tory Carter here, a critical member of the LSU football team as a first-year player — a hard-hitting, contact-seeking destructive ball of energy with those flowing blond locks and bright blue eyes.

He’s getting after that you-know-what, just like his father did three decades ago as a fullback and linebacker at Georgia Southern. The nickname James Carter adopted during his football-playing days encapsulates him and his son: "Wildman."

Tory Carter is evolving into a key rotational player for LSU at the F-back position, a hybrid fullback/tight end spot in coordinator Matt Canada’s offense. Sure, the freshman caught that 2-yard touchdown pass in the win against Florida on Saturday, but his primary job is something else entirely.

He’s first and foremost a blocker. Like Dad, he loves it.

As a freshman, Tory is unavailable for interviews, but he’s an avid poster on social media.

“To be honest,” Carter wrote on Twitter two weeks ago, “I just want to hit people.”

He’s doing just that. He played a career-high 30-plus snaps against the Gators, his father said, spelling banged-up starter J.D. Moore. Most of those were spent bashing into defensive players.

The 6-1, 257-pounder was the leading blocker on LSU’s first three receiver running plays — two jet sweeps and an end around — in the 17-16 win last week in Gainesville, Florida. Tucked behind the tight end in his F-back position, Carter whipped around the opposite end, leading the way for Derrick Dillon, then Russell Gage and finally D.J. Chark.

Those three plays gained a combined 53 yards, much of that because of Carter’s blocks on the edge. He locked up against long, rangy defenders like receivers and outside linebackers, cutting them at the knees to topple them to the ground or shoving them down field.

He created wide running lanes for the Tigers’ speedy receivers. His dad did something similar — kind of — three decades ago.

James Carter played fullback and middle linebacker at Georgia Southern in the late 1980s, helping that program win the Division I-AA national championship in 1986 as a freshman fullback in the team’s Power-I offense.

He played on kickoff teams, too, the origin of that nickname of his. Folks back in Valdosta, Georgia, still refer to him as Wildman.

“It’s been hard to get rid of that name,” said James, a youth football coach for years who now sells cars and spends his weekend watching the Tigers play.

Derrius Guice is not fully healthy, and it could remain that way for a while, coach Ed Orger…

Wildman is a football guy through and through.

How football is he? James created a full-length football field on his heavily wooded 10-acre rural property in Lowndes County, Georgia, turning his father’s old garden into a gridiron. The field is lined by 70-foot-tall Georgia pine trees. He expects to hold youth football camps there starting this summer with, of course, his son.

The two are inseparable. When in town for games or to visit, James Carter does not stay in a Baton Rouge hotel. He bunks with his son in his dorm room, he said.

On the middle of his Georgia property is a small cabin. It’s their home, he said, just dad and son. It's always been that way, and Tory was always meant to be a fullback.

“He was a fullback when he came out of the womb,” James laughed.

Moore, the starting F-back, agreed Tory James is a natural for the position.

“He’s a hard hitter, really wants to go open up a hole and make a block,” Moore said. “He’s a tenacious guy. Young body hasn’t been beat up as much as mine has. He’s ready to stick his nose in there and make plays.”

You understand now why Tory Carter is, indeed, Wildman 2.0, taking after Dad — from those big hits to his choice of music. In an interview with The Advocate in June, Tory revealed he drove through the night from his home in Georgia to report for preseason camp the next day.

How’d he stay awake during that seven-hour haul?

Frank's back! What's it mean for an LSU defensive line struggling with depth?

About four months later, this 18-year old is making an impact ahead of a showdown Saturday between LSU (4-2, 1-1 Southeastern Conference) and No. 10 Auburn (5-1, 3-0). It doesn’t surprise some people. His position coach, Steve Ensminger, predicted it in an interview over the summer.

“I expect big things out of Tory,” Ensminger said. “Tory is a big physical guy who can run and loves contact.”

Carter was the No. 1-ranked fullback in the 2017 class, committing to LSU in May 2016 and sticking with the pledge despite coaching and schematic changes. He was recruited as a traditional fullback in Les Miles’ pro-style offense.

He has adapted, and he’s “progressing a lot,” Moore said, in Canada’s spread scheme. This is all new to him. Carter excelled at another position entirely in high school. He was an all-region defensive end at Lee County High in Leesburg, a town of 3,000 people in the southwest part of Georgia.

Dad watched from a few rows up at Ben Hill Griffin Stadium. Tory posted on Twitter photos of James celebrating in the stands, presumably when his son corralled quarterback Danny Etling’s pass for that score.

There was a postgame photo, too, of Tory hugging James — son still on the field in uniform and Dad leaning over the concrete wall of the stadium embracing his mini me.

“Thankful to have this man in my life!” Tory wrote in the tweet. “I play for him!”

He fights him too.

For years, the two have battled each other in basketball, competitive racing and wrestling. Slowly over the years, son has beaten Dad. First, it was basketball, and then Tory out-raced his father. James, competitive as ever, blames the loss on the right ankle injury that ended his football career as a junior at Georgia Southern.

The excuse is valid. He developed staph in the ankle and underwent 14 operations. Doctors nearly had to amputate it at one point.

He hobbles along, still beating his son in their wrestling matches — up until this past year. Just before Tory left for LSU in May, the two wrestled one another in waist-high water in Georgia’s Suwanee River.

With his son in a headlock, James was well on the way to another victory, extending an undefeated streak. Then, Tory picked up his father and slammed him into the water.

“He says, ‘I’m glad I was there,' James said. 'I’ve never seen the whites of your feet until your boy picked you up.'

LSU vs. Auburn: Players to watch, key matchups and numbers to know

Six passes thrown his way in the first four games, Donte Jackson needed some spice in his football life.

BAKER — There is a reason the Gage family’s living room is mostly empty.