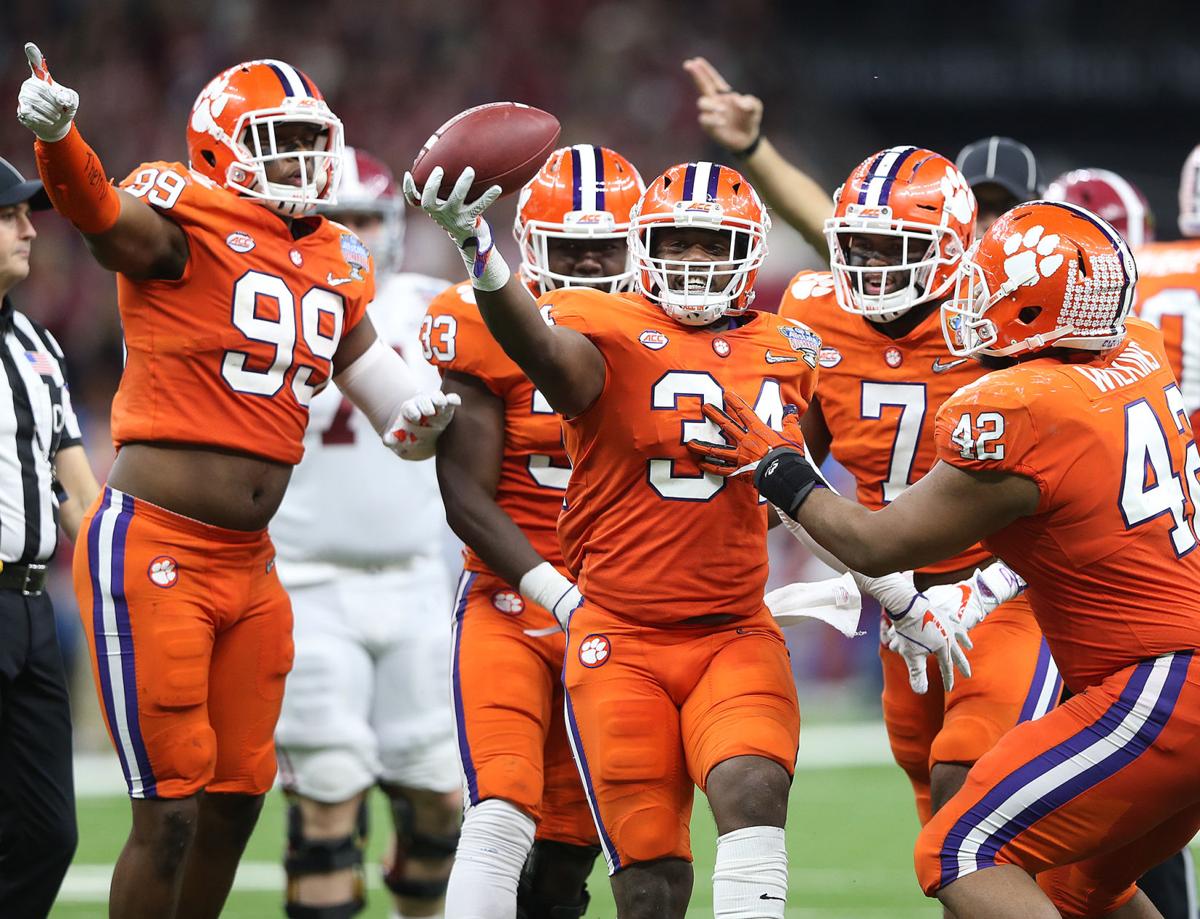 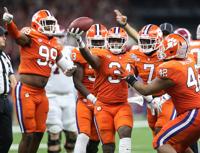 Clemson linebacker Kendall Joseph (34) recovers a missed Alabama handoff in the third quarter during the 2018 Allstate Sugar Bowl at the Mercedes-Benz Superdome on Monday, January 1, 2018. 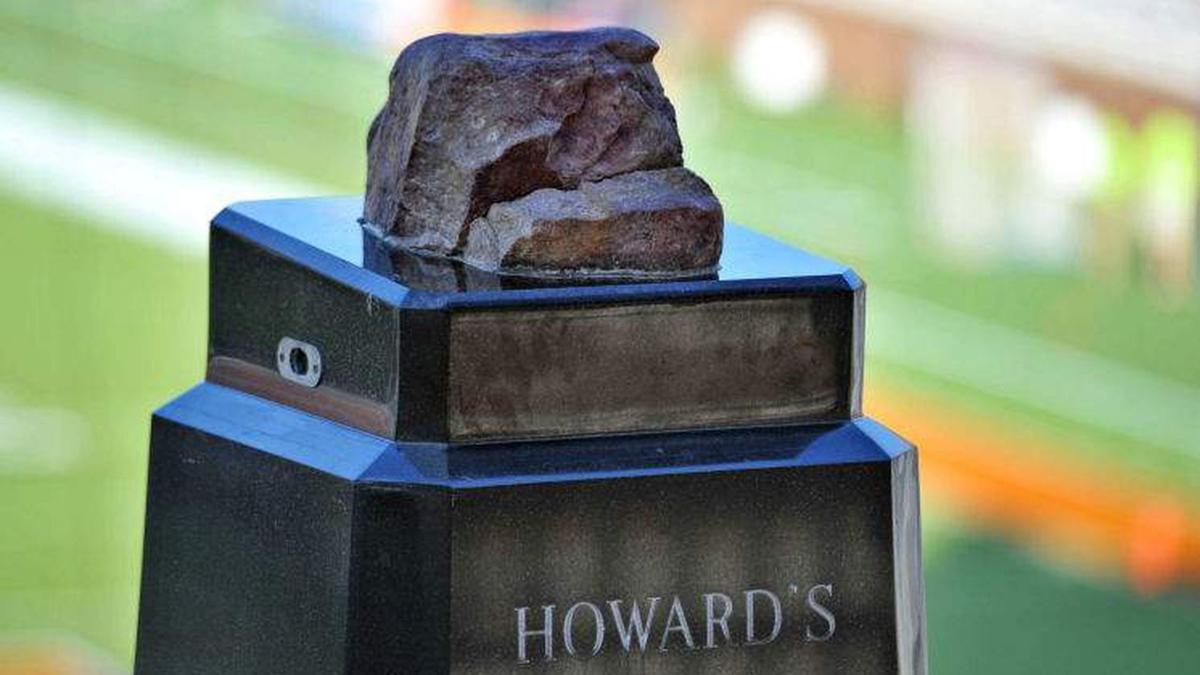 Clemson players rub Howard's Rock for luck on their way into Memorial Stadium for home games. 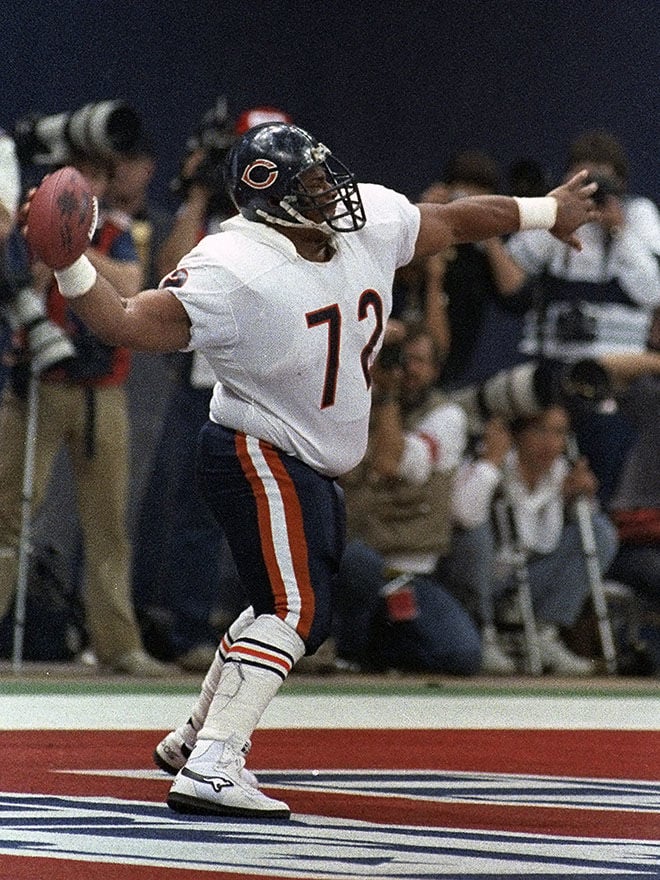 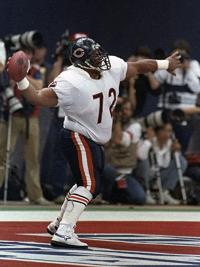 Former Clemson All-American defensive lineman William "The Refrigerator" Perry celebrates after scoring a rushing touchdown for the Chicago Bears in Super Bowl XX on Jan. 26, 1986 against the New England Patriots in the Mercedes-Benz Superdome.

Clemson linebacker Kendall Joseph (34) recovers a missed Alabama handoff in the third quarter during the 2018 Allstate Sugar Bowl at the Mercedes-Benz Superdome on Monday, January 1, 2018.

Clemson players rub Howard's Rock for luck on their way into Memorial Stadium for home games.

Former Clemson All-American defensive lineman William "The Refrigerator" Perry celebrates after scoring a rushing touchdown for the Chicago Bears in Super Bowl XX on Jan. 26, 1986 against the New England Patriots in the Mercedes-Benz Superdome.

The similarities run deep between LSU and Clemson.

Both refer to their stadium as Death Valley (more on Clemson’s version later).

Both began their existence as military schools.

And both clung to lone national championship seasons from the distant past — LSU in 1958, Clemson in 1981 — before taking off and becoming national powers in the 2000s.

It isn’t just the CFP national championship at stake when LSU and Clemson face off Jan. 13 in the Mercedes-Benz Superdome (7 p.m., ESPN). It will be the right to say they are the ultimate Tigers. The kings of the college football world.

So it’s time to start down I-10 to the Dome and take in these 10 things to know about Clemson:

Before he left in 1939 to begin a legendary career at Rice, Jess Neely told Clemson officials not to waste their money on building a big football stadium. “Put about 10,000 seats behind the YMCA,” Neely said. “That’s all you’ll ever need.” Being a school in the football-mad south, Clemson ignored Neely’s words, and in 1942 20,000-seat Memorial Stadium opened in a valley on the west side of the campus. Much of the initial work was done by Clemson student-athletes at the time. One of them, Hugh Webb, helped stake out the stadium site and later became a civil engineer in Louisiana. Over the years, capacity has increased to 81,500 after the most recent renovations in 2015. According to Clemson, the stadium has been referred to as Death Valley since 1948, so named by Presbyterian coach Lonnie McMillan, whose team was a frequent victim in those early Death Valley days. In 1974, the field was named for long-time coach Frank Howard.

Back in the early 1960s, a friend of Howard’s named Samuel C. Jones picked up a 2½-pound white flint rock in Death Valley, California, and presented it him upon his return. At first, Howard is said to have used the rock as a doorstop, then in the summer of 1966 advised Clemson booster Gene Willimon to “throw it over the fence or out in the ditch.” Instead, Willimon had the rock put on a pedestal near where Clemson players would pass entering the stadium. In Clemson’s 1966 season opener against Virginia, the Tigers rallied from an 18-point deficit for a 40-35 win. Clemson players began the tradition of rubbing the rock for good luck for their season opener the following year against Wake Forest. By that time, Howard’s opinion of his former doorstop had changed. “Give me 110 percent,” Howard told his players, “or keep your filthy hands off my rock.” Because fans of the South Carolina Gamecocks have reportedly tried to steal or deface the rock over the years, members of the Clemson ROTC now guard the rock for 24 hours leading up to every South Carolina game played at Clemson.

3. Run down The Hill

It is described as “the most exciting 25 seconds in college football.” As they have done since the 1940s, before every home game Clemson players leave their locker room at the west end of the stadium and, fully suited up, take three buses to the open east end of Death Valley along Williamson Road. There they mass under the stadium’s main scoreboard waiting for a small cannon to be fired, their signal to touch Howard’s Rock as they run down the hill over a long orange carpet onto the field. “To get off the bus, enter Death Valley and approach this rock hearing 85,000 people screaming,” Clemson coach Dabo Swinney said, “the intensity of the moment is very real.”

4. Tigers of a different stripe

Clemson’s original colors were red and blue, but they changed in 1896 thanks to the school’s first football coach, Walter Merritt Riggs. An Auburn grad, Riggs transplanted his school’s colors — then orange and purple — as well as Auburn’s tiger nickname to Clemson. Many Clemson students, faculty and staff are known to wear solid orange every Friday during football season as a symbol of pride and unity.

A week after beating Oklahoma in the Peach Bowl, the LSU football team practiced indoors on a sunny day in preparation for its national champi…

Few schools have produced more enduring football personalities than nose tackle William “The Refrigerator” Perry, Clemson’s first three-time All-American. His famous nickname was bestowed by a Clemson teammate named Ray Brown, who when once struggling to fit into an elevator with Perry said, “Man, you’re about as big as a refrigerator.” A member of the Tigers’ 1981 national championship team, Perry and his brother Michael Dean played together on the Tigers’ 1984 team before William was selected in the first round of the 1985 NFL draft by the Chicago Bears. Perry became an instant sensation in Chicago, where coach Mike Ditka called on him to run the ball in short-yardage situations. Perry even scored a rushing touchdown in the Bears’ Super Bowl XX victory over the New England Patriots at the Louisiana Superdome in January 1986.

Fans attending the national championship game may think they’re hearing an echo when the LSU and Clemson bands play. That’s because they may be playing the same song at the same time. Both schools consider “Tiger Rag” their fight song, though Clemson’s is played a little faster with a high tempo segment near the end as compared to the LSU version, whose drawn out first four notes always signal the start of every home game. Clemson’s band is the Clemson University Tiger Band, while LSU’s is officially the LSU Tiger Marching Band. Another similarity between the schools: LSU’s band holds an annual concert called Tigerama (there were two in 2019, one at LSU and one in New Orleans), while at Clemson Tigerama is a student pep rally held during homecoming week at Memorial Stadium.

Clemson has had a student suit up in a tiger costume at games since 1954, but unlike LSU’s Mike the Tiger (real and costumed versions), Clemson’s tiger is simply referred to as the Clemson Tiger.

Clemson also does not keep a live tiger mascot on its campus. But unlike LSU’s version, the Clemson Tiger does pushups after every score equal to Clemson’s score in the game, performing atop a large orange board held up near the student section. Considering the heat of some games and the fact the tiger costume weighs about 45 pounds, those wearing the mascot costume have been known to lose 10-to-12 pounds during a game.

While LSU’s symbol on its helmet is a recently revamped head of a snarling tiger, Clemson’s symbol is the tiger paw. “The Tiger Paw,” gushes an article on Clemson’s athletic website, “might be the most widely recognized school symbol in the nation” (OK, pump the brakes, guys). The symbol debuted in 1970, two years before LSU started putting the Tiger head on its helmets. Clemson commissioned an advertising firm in Greenville, South Carolina, to come up with a logo. The firm contacted the Field Museum of Natural History in Chicago and got a plaster imprint of a stuffed tiger’s paw. Advertising executive John Antonio converted that into a print, tilted it about 10 degrees to the right, painted it orange and, voila, Clemson’s enduring logo was born. Today, the Clemson Tiger paw has been widely reproduced on merchandise and on an innumerable number of surfaces, including roads leading to tiny Clemson, South Carolina (population 16,649).

Started in 1934, Clemson’s IPTAY fund is considered the granddaddy of collegiate athletic fundraising. IPTAY stands for “I Pay Ten (dollars) A Year.” While born in the depths of the great depression the organization managed to bring in $1,600 that first year to help pay for athletic scholarships, though some Clemson supporters bartered donations of milk, sweet potatoes, turnip greens and other agricultural products. Dues have gone up a bit since then, now ranging from $60-25,000 per year. The largest group of IPTAY members, just under 3,000, donated $180 a year in 2019, the minimum amount to qualify for two season football tickets.