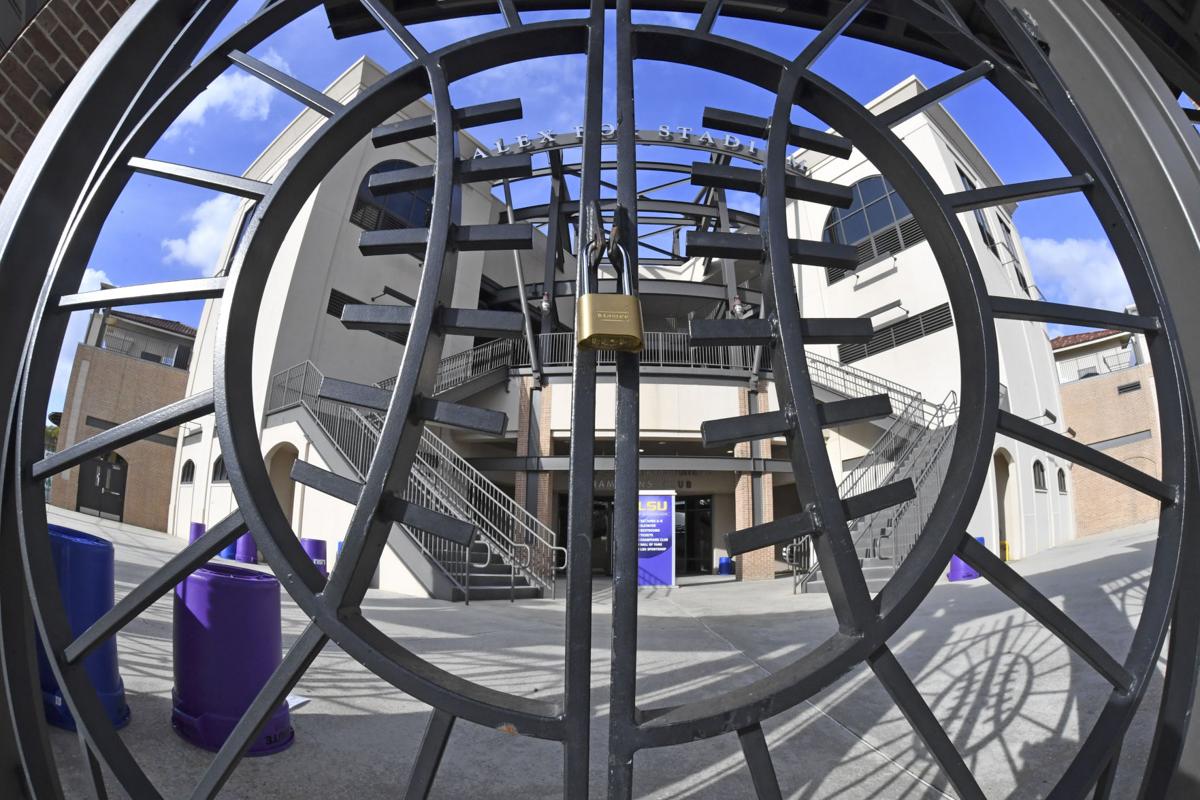 The gates of LSU's Alex Box Stadium are padlocked Thursday afternoon, March 12, 2020. That day the Southeastern Conference suspended regular season competition for teams in all sports on SEC campuses, as well SEC championship events. The remainder of the baseball season would eventually be canceled. 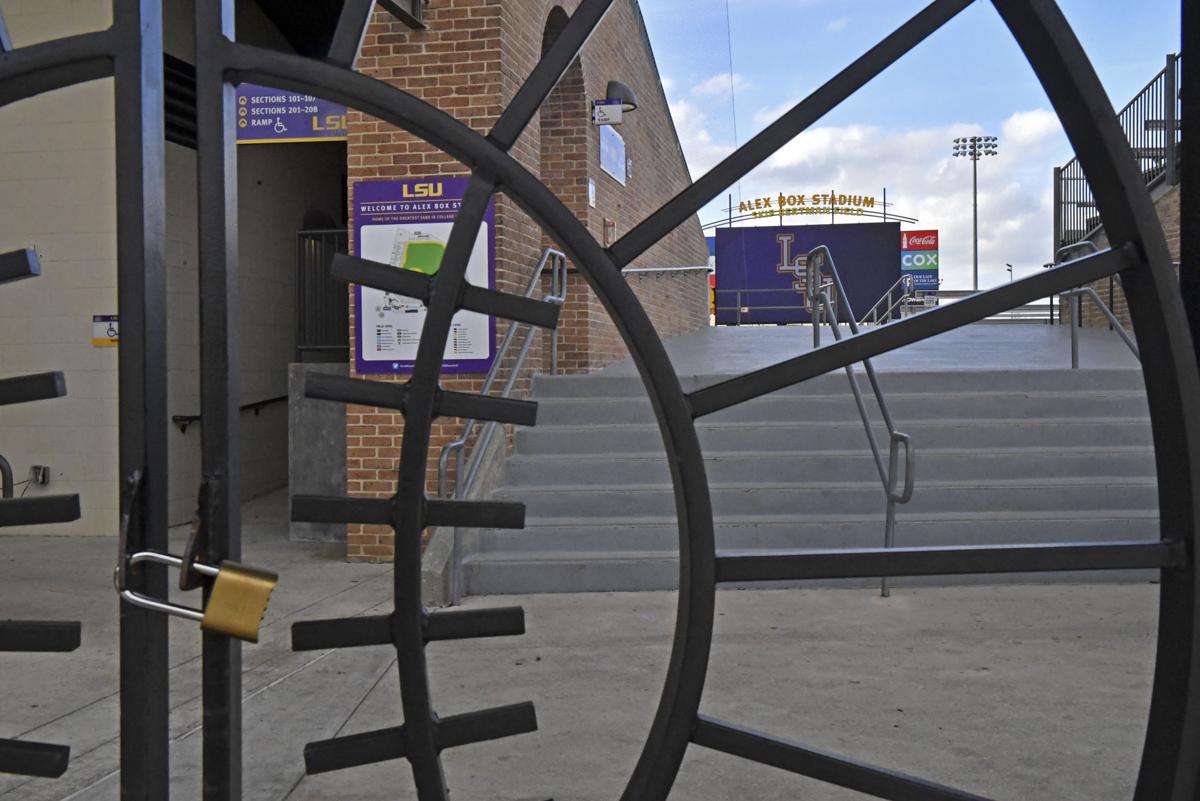 The gates of LSU's Alex Box Stadium are padlocked Thursday afternoon, March 12, 2020, in Baton Rouge, La. It was announced Thursday that the Southeastern Conference has suspended regular season competition for teams in all sports on SEC campuses, as well SEC championship events, until March 30.

The gates of LSU's Alex Box Stadium are padlocked Thursday afternoon, March 12, 2020. That day the Southeastern Conference suspended regular season competition for teams in all sports on SEC campuses, as well SEC championship events. The remainder of the baseball season would eventually be canceled.

The gates of LSU's Alex Box Stadium are padlocked Thursday afternoon, March 12, 2020, in Baton Rouge, La. It was announced Thursday that the Southeastern Conference has suspended regular season competition for teams in all sports on SEC campuses, as well SEC championship events, until March 30.

On Thursday afternoon, the NCAA had canceled all winter and spring championships, including the College World Series, in reaction to the nationwide spread of coronavirus.

Mainieri had already grappled with uncertainty when the Southeastern Conference suspended competition earlier in the day, but the NCAA’s announcement gutted him. The LSU baseball coach had focused his entire 38-year career on reaching the national championship series each summer.

“If the College World Series is canceled,” Mainieri said, “what are you playing for?”

While Mainieri sent his players home Thursday morning, coach Will Wade and his team scrambled for a flight out of Nashville, Tennessee, the site of the SEC men’s basketball tournament. About 20 minutes before an 11 a.m. breakfast, league officials notified Wade the conference had canceled the rest of the tournament.

The LSU men’s basketball season had ended without a postseason game. On the verge of beginning the conference schedule, Mainieri wondered if he will coach again this season.

The Southeastern Conference has suspended all regular season competition for all athletic events, SEC championship events, plus on and off-cam…

Sports have now joined the mass disarray coronavirus has spread to the darkest parts of the world.

They'll all ask the same questions.

What do we do? When will it end?

More than 1,000 people in the United States are now infected by COVID-19, and Louisiana reported 19 cases of coronavirus by Thursday afternoon.

COVID-19 is a member of the coronavirus family, which includes viruses that cause common colds and others that result in more serious illnesses, such as SARS and MERS.

The virus can cause fever, coughing, wheezing and pneumonia. Health officials said they believe it spreads mainly from droplets when an infected person coughs or sneezes, similar to how the flu spreads.

As questions swirl around college athletics, the NCAA, its president, Mark Emmert, and its Board of Governors have drawn the most distinct boundary, and the conferences and schools beneath the NCAA's government are reeling to figure out just how they'll fit in.

'What are you playing for?' LSU waits in uncertainty after College World Series canceled

On the verge of conference play, LSU baseball's season was paused for the next 18 days, maybe longer, and after the NCAA canceled the College World Series, no one around the facility knows what to expect next.

It began Wednesday afternoon when Emmert announced that no fans would be allowed to attend the Division I men's and women's basketball tournaments, due to coronavirus concerns.

By Wednesday night, most leagues, including the SEC, had followed the NCAA's policy, restricting their conference tournaments to essential staff and limited family attendance.

The SEC's first tournament game, Georgia's 81-63 win over Ole Miss, had just concluded at Bridgestone Arena in Nashville, where three cases of confirmed coronavirus had turned up the previous weekend, when the league's officials began to feel at ease.

"I will say to you, we were catching up," SEC Commissioner Greg Sankey told the SEC Network on Thursday.

Then, in less than half an hour, news broke that the NBA was suspending its entire season because of the virus.

Sankey said the NBA's action influenced the SEC's decision-making overnight, and on Thursday morning, the league announced that it was canceling the remainder of its men’s basketball tournament and suspending all regular-season competition for teams in all sports, as well as SEC championship events, until March 30.

Will Wade on NCAA calling of basketball season: It 'did the right thing'

NASHVILLE, Tenn. — The LSU basketball team’s day at the Southeastern Conference tournament started on a sour note Thursday, and it only got wo…

Kentucky, the regular-season champion, was awarded the league’s automatic bid to the NCAA tournament.

The SEC gymnastics and equestrian championships were both canceled since they fell before the March 30 timeline.

When Sankey addressed reporters at a news conference Thursday afternoon, he admitted: “I don’t have all of the answers” about when the league would actually return to play.

“It may not be March 30,” Sankey said. “It may be beyond. But that remains to be seen. We’ve identified a time frame where we can engage in conversation and in decision-making.”

And once again, SEC officials felt at ease only to be jarred by the most drastic NCAA decision yet: the cancellation of all remaining championship events in winter and spring sports.

No March Madness. No College World Series. No gymnastics or track and field or softball championships, or any of the remaining sports left in the academic year.

The NCAA’s decision to include such a far-reaching timeline was stunning, and it puzzled SEC and other league officials, because the NCAA offered no further public explanation, noting only that the decision ensured “the events do not contribute to spread of the pandemic.”

“I hope we can learn more about what informed the NCAA’s decision to extend the championship cancellation … into those spring sports,” Sankey said on SEC Network. “It’ll be some important information for us to learn from, and I think use, as we make decisions.”

Five more people have presumptively been sickened by the new coronavirus in Louisiana, bringing the statewide total to 19, state health offici…

Several decisions remain. Could eligibility even be extended for seniors, juniors, whomever, who have been affected by the cancellation?

“Not at this point,” Sankey said. “That would be one of those issues on a long list of additional items to consider, and I don’t think we have to come to that conclusion right now.”

The postseason, the target for which every collegiate program takes aim, was suddenly knocked down, leaving conferences and schools deciding whether they were going to play out their individual seasons.

The SEC is leaning on its initial decision, its weeks-long timeline to figure out what exactly its member schools will do. The league’s schools, like LSU, are cautious to make such major calls on their own.

LSU interim president Tom Galligan announced that the university will hold in-person classes Friday, cancel classes from March 16-30, then hold the remainder of classes online through the end of the spring semester.

Meanwhile, LSU’s spring sports, including football, will continue practicing, LSU senior associate athletic director Robert Munson said, because the SEC has left such a decision to the discretion of its schools.

LSU’s spring football game is still scheduled for April 18 at A.W. Mumford Stadium on Southern University’s campus, and there has yet to be any decision on whether that will change.

For now, the SEC ordered the stoppage of all on and off-campus recruiting activities, which forced several of the league’s coaches off the recruiting trail.

LSU announced that its Junior Day recruiting weekend, pegged for Saturday, will be “rescheduled for a later date.”

The school’s annual coaching clinic, which was to run through Saturday, was reduced to a one-day event, only Thursday evening.

As Mainieri processed the announcements, he questioned if LSU will play another baseball game this season. Before the NCAA canceled its championships, he had decided to resume practices Monday, planning to train while LSU waited for the season to resume.

But now, Mainieri waits for a decision on the rest of the schedule. His players expressed their heartbreak on social media, writing phrases like “worst nightmare” and “unbelievable” on Twitter. They were scheduled to play Ole Miss on Friday.

For almost four decades, Mainieri’s career has focused on trying to reach the championship series. His players have trained their entire lives for a chance to hoist the trophy and dogpile on the mound. No one will this summer.

Still, Mainieri emphasized the importance of perspective as the world deals with a pandemic.

After the NCAA canceled the College World Series, Mainieri reiterated the message he told his players on Thursday morning, when they still believed they may play for a championship this season.

"There's bigger issues in the world than what's happening with college basketball or college baseball or college softball or gymnastics," Mainieri said. "We've got a crisis that's worldwide. It needs to be dealt with and handled,  because the most important thing is the health of humanity and the care of our loved ones."

The Southeastern Conference has suspended all regular season competition for all athletic events, SEC championship events, plus on and off-cam…