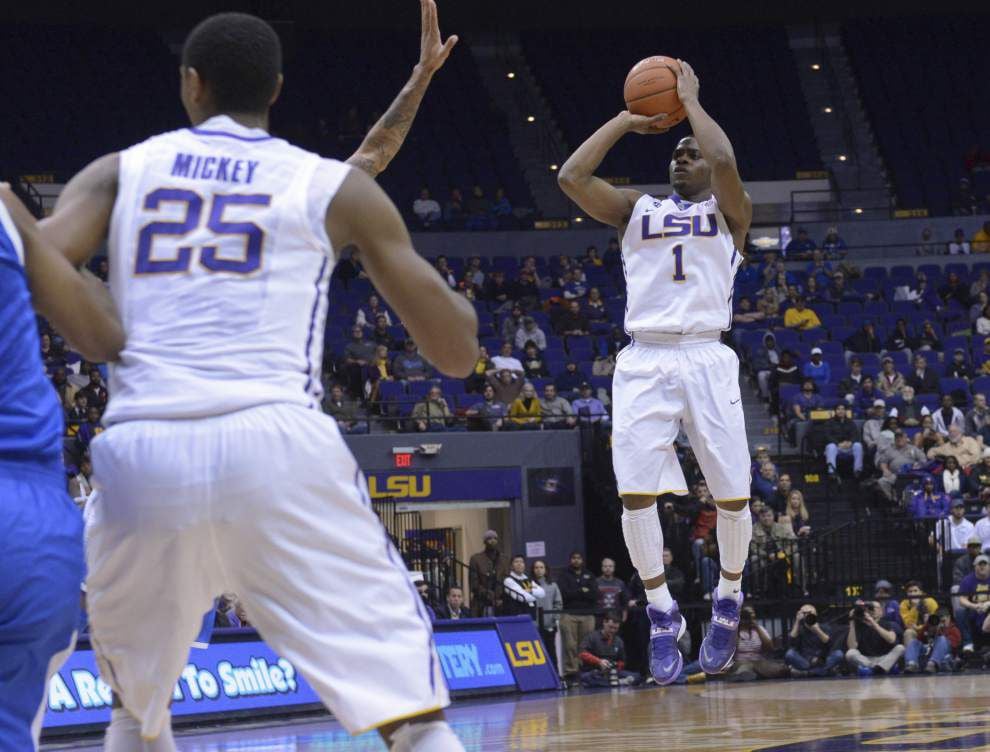 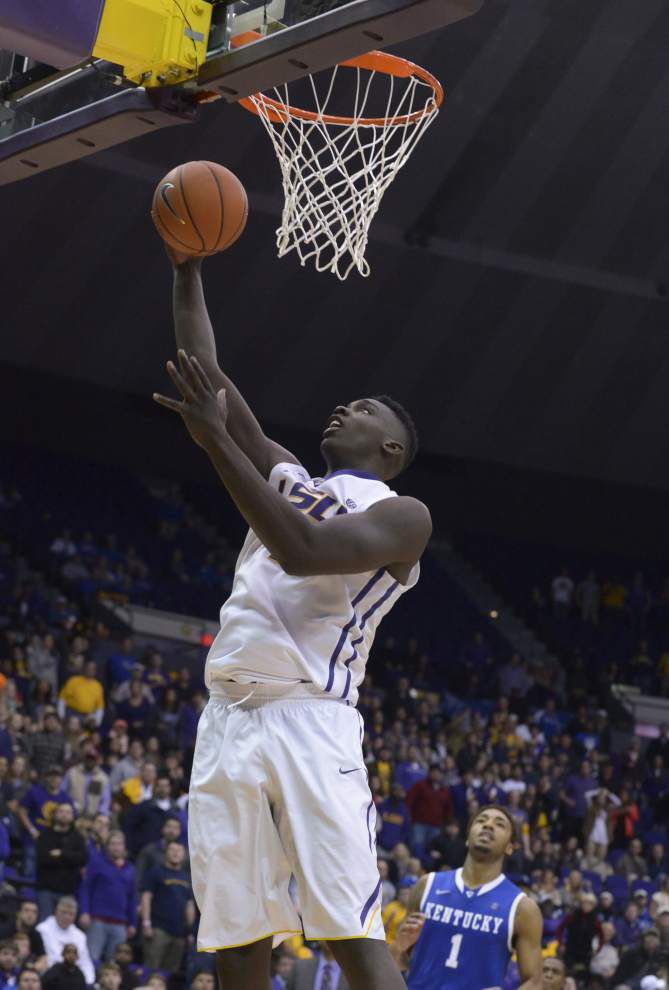 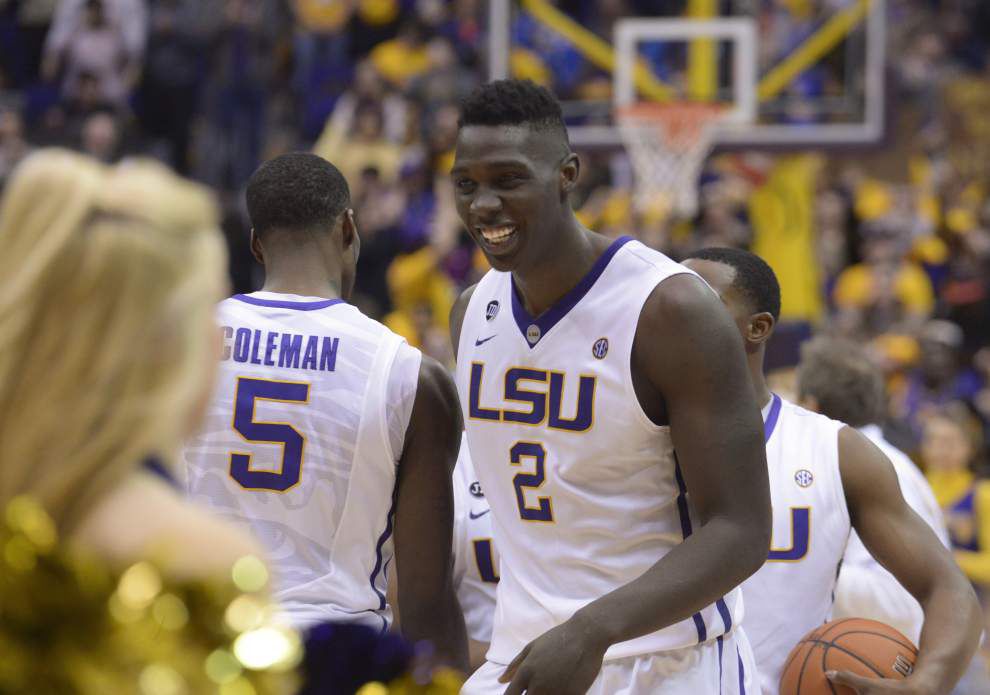 Before the throng of purple-and-gold clad students 3,500-strong pushed toward the baseline to celebrate, LSU coach Johnny Jones finally let reality engulf him.

Thirty-five seconds showed on the scoreboard above the Pete Maravich Assembly Center floor, and the Tigers’ cushion sat at nine-points against No. 11 Kentucky. Sure, a coach’s mind conjures up a lot of nightmare scenarios. Not on Tuesday, though.

On a day where Baton Rouge was coated in ice, the Tigers ended a five-game losing streak to UK by jumping all over the Wildcats early and riding a bullish 29 points and nine rebounds from Johnny O’Bryant III in an 87-82 upset that might nestle nicely into the program’s lore.

Fueled by O’Bryant, who scored 10 points in the opening five minutes, the Tigers jumped out to a 22-6 lead with a little over 13 minutes left in the first half that laid out the template for the night.

“We wanted to come out aggressive,” O’Bryant said. “I came out with the first couple points and my team really rallied around that and fed off that.”

First, O’Bryant hit a hook shot in the lane and followed it up a possession later with a mid-range jumper. After Shavon Coleman canned a 3-pointer in the right corner for a 7-2 lead, UK coach John Calipari had little choice but to call for time to settle the water.

On the other end, LSU smothered UK with a long lineup of O’Bryant, Jordan Mickey, Shavon Coleman and Jarell Martin in a zone meant to apply pressure inside on forward Julius Randle, cut down driving lanes for twins Andrew and Aaron Harrison, and allow short close outs on James Young.

Instead, it produced five early turnovers that LSU rode to nine points and hitting nine of its first 12 shots from the floor as UK foundered.

When Coleman sliced through the lane for a scoop shot with 13:50 left, it pushed the LSU lead out to 20-6 and put the bewildered Wildcats on the brink of a blowout.

“They was just playing harder than us,” forward Dakari Johnson said. “They were hitting a lot of open 3s. They just broke (us) down a lot defensively.”

Yet UK didn’t slink away.

Young, who scored 23 points on 9 of 18 shooting, swished a 3-pointer from the left corner, hit a jumper two trips later and then buried another jumper from behind the arc to cap a three-minute stretch where UK pared the lead to 22-16.

Outside of a 3-pointer from Andre Stringer, LSU, which shot 50 percent on the night, endured a 5:40 span with a field goal while settling for jumpers that triggered UK’s transition game.

“With those turnovers, I don’t think we made great decisions on the back end,” Jones said. “It gave them an opportunity to get back out on the run, and they feed off that. They feed of bad decisions, bad shots, long rebounds and getting out on the break.”

With 6:51 left in the half, Young drilled another 3-pointer at the top of the key, followed a Randle swiping a steal and finishing the break with a two-handed dunk — a rare highlight on a night where he scored just 11 points — to slice the Tigers lead to 27-24.

Exiting the huddle with three minutes until half, LSU’s once 16-point lead stood at only 36-31.

Cue up Anthony Hickey, a Kentucky native and the state’s former Mr. Basketball, to drill two step-back jumpers on consecutive trips, and then feeding Stringer on the right wing for a trey and a 41-33 lead with 2:12 left until the half that was 42-36 at the break.

“We knew they was going to come out and make their little run,” Coleman said. “That was something they was able to do, but we didn’t let that get to us.”

And the Wildcats’ glittering roster of luminary freshman never knitted together a game-changing run.

Outside of Young knocking down a 3-pointer with 14:09 left to make it 56-48, the Wildcats, who shot 43.8 percent, never led and spent the bulk of the second half trailing by double digits.

Randle, a potential Wooden Award finalist, missed eight of 11 shots and only went to the foul line once, missing a free-throw on a potential three-point play. Again, Willie Cauley-Stein was battered by brawnier post players, finishing with only three points and six rebounds.

At one point, Cauley-Stein was yanked and argued openly with assistant coach Kenny Payne on the bench. Meanwhile, on one defensive trip, Calipari blatantly gave a two-handed shove to Aaron Harrison, who was ball-watching on the other side of the floor.

“Guys have to understand they didn’t come out and match the energy of the other team, and this is what happens,” Calipari said. “This is the stuff we’re talking about, mental discipline, which this team does not have.”

UK won the battle in the paint, outscoring LSU 40-32, and had a plus-5 rebounding margin the Cats turned into 16 second-chance points. But there was little doubt the lane belonged to O’Bryant.

Instead of settling for jumpers, the junior lowered his broad shoulder, laying the ball in after plowing through Johnson and then hitting a baby hook in the lane over Cauley-Stein on the next trip for a 48-38 lead with 18:27 left. Ninety-seconds later, he swished a turn-around jumper on the right block.

“I was just attacking,” O’Bryant said. “I knew they were younger guys, and I had an advantage on the experience- and body-wise.”

Later, he finished off his night, one where he went 11 of 19 and finished a point shy of his career-high, with dunk after slithering along the baseline to take a dish from Hickey that he mashed down for a 77-64 lead with roughly six minutes left.

“He did an excellent job of going inside,” Jones said. “He hit a few jumpers outside and forced them to defend him a different way. Initially, they wanted to try and show him single coverage. Inside, he did a great job taking advantage of that.”

What the victory means for LSU, though, is hard to divine.

Surely, it’s a needed injection of confidence after a failed rally from a 19-point hole in a loss Saturday at Alabama. But the Tigers had seemingly slid off the NCAA tournament bubble before it formed. Tuesday night surely brushed up those credentials.

“We’ve got a lot of basketball left,” forward Coleman said. “Getting a win over Kentucky is big for us, but we’ve got more games to win to get to the NCAA tournament.”

Perhaps it was better, too, not letting the mind wander that far down the road.

Instead, Jones and the Tigers simply strode to the end of the hardwood to enjoy a fleeting break from the grind.

“I feels so great right now,” Hickey said. “I wanted to get them at least once when I was here.”