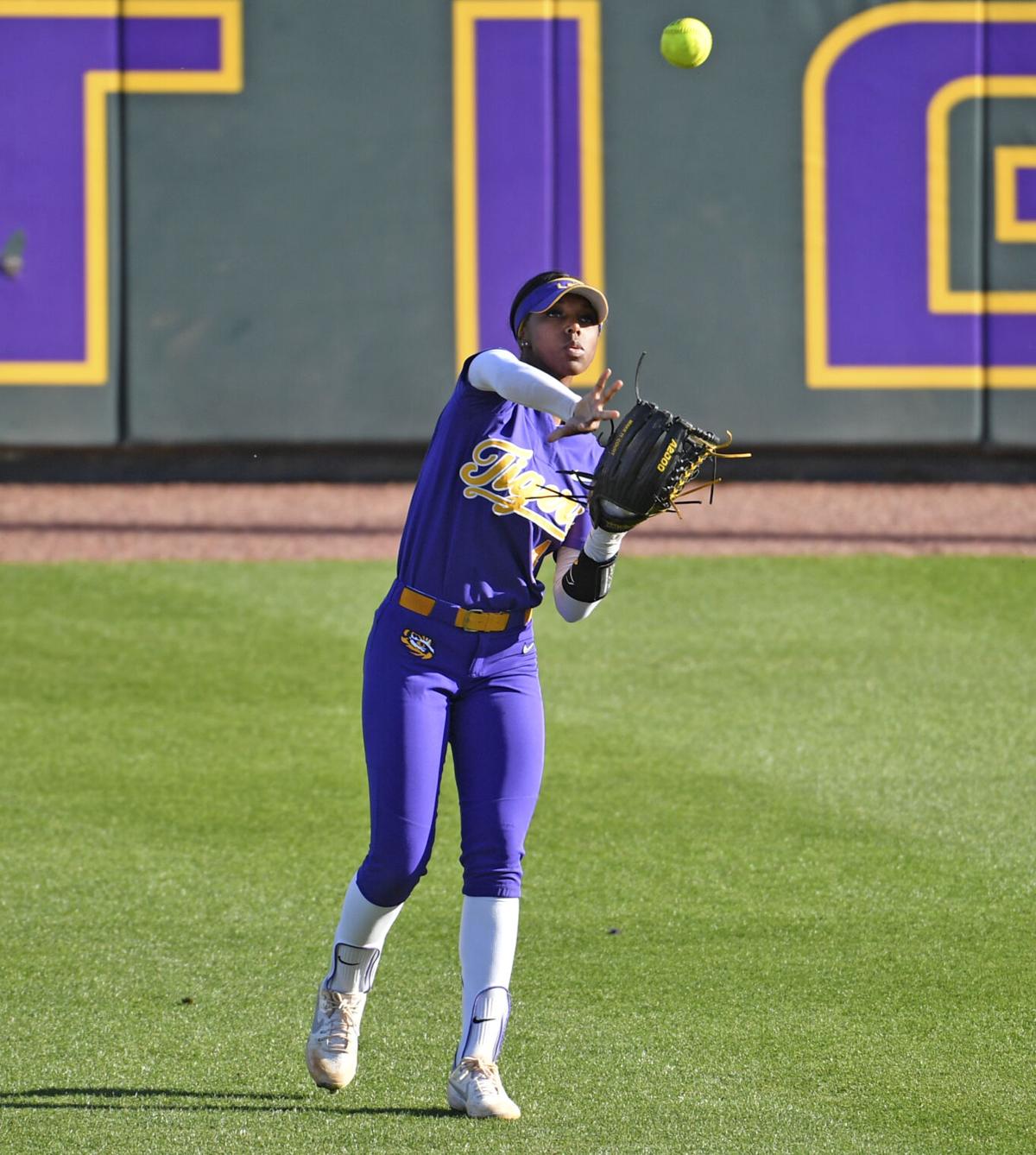 LSU centerfielder Aliyah Andrews (4) throws the ball in on a base hit hit by Oklahoma State centerfielder Chyenne Factor, Friday, February 26, 2021, at Tiger Park on the campus of LSU in Baton Rouge, La. 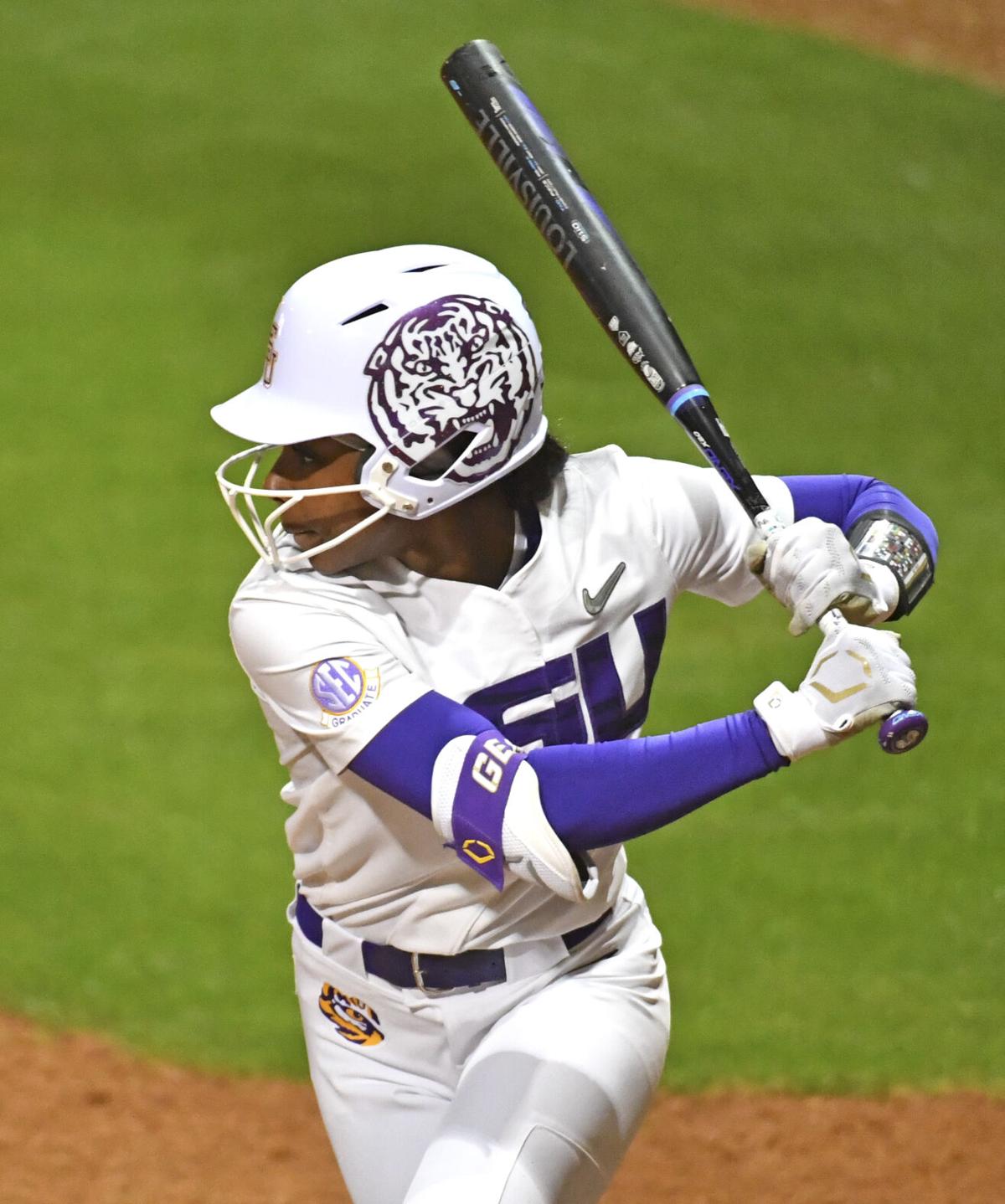 LSU centerfielder Aliyah Andrews (4) throws the ball in on a base hit hit by Oklahoma State centerfielder Chyenne Factor, Friday, February 26, 2021, at Tiger Park on the campus of LSU in Baton Rouge, La.

No. 13 LSU got off to a hot start on a frigid night and once again battled the elements as well as an opponent to get an 11-3 softball victory against Southern Mississippi at Tiger Park Tuesday night.

Hot-hitting senior Aliyah Andrews led off the game for LSU with an inside-the-park home run — her first career homer — and freshman Ali Newland keyed a six-run second inning with her own roundtripper to stake the Tigers to an early lead.

A 40-degree night was accented by a strong north wind adding to the difficult conditions which the Tigers are becoming accustomed to. LSU coach Beth Torina took advantage of the lead to play 20 of her 28 players.

“We had some conditions out there, a little windy, a little cold,” Torina said. “But it felt like a heat wave compared to the first weekend.

“With the season the way it is and all the challenges, COVID, all those things, you look forward to having your entire roster ready. When we have a chance to get people ready we need to take it. We’re still competing at a couple of positions.”

It wasn’t all pretty. LSU (11-5) took advantage of 10 walks — four, plus a hit batter, in the second inning — and committed three errors. Pitcher Shelby Wickersham went six innings with five strikeouts and three walks. She pitched out of two jams with the help of two nicely turned double plays.

Savannah Stewart came off the bench to hit a two-run single in the fifth inning and Taylor Pleasants closed out the game with a run-scoring single in the sixth.

Southern Miss (11-5) got a two-run double from Heather Hill, who had two of the Golden Eagles’ five hits.

It was Andrews who delivered the most exciting of LSU’s 10 hits. She went the opposite way with a line drive down the left field line. Southern Miss outfielder Karley Nichols dove for the ball but it got past her and rolled to the fence. Andrews sped around the bases and scored standing up.

It was her first home run in 737 plate appearances.

“I didn’t know she dove for it; I didn’t know what happened — she (Torina) just waved me around. I didn’t know it was a home run until later on. It’s cool, for sure. I did get the ball (for a keepsake). Coach brought it to me.”

Andrews, who has been on a tear and was named SEC Player of the Week for last week, took over the team lead in batting average at .404. Normally a slapper, the homer was her fourth extra base hit of the season.

“I know she wanted it to be a different kind of home run; we’ll take it,” Torina said with a laugh. “What a way to set a tone right off the bat. It allows the rest of your team to breathe, relax and play softball. Ali Newland said, 'We go as you go.' I couldn’t agree more.

“She’s worked very hard on that (hitting for power). She’s tried to diversify her game to be able to hit for some power and still keep her soft slap. It’s good to see her be successful with all of her weapons.”