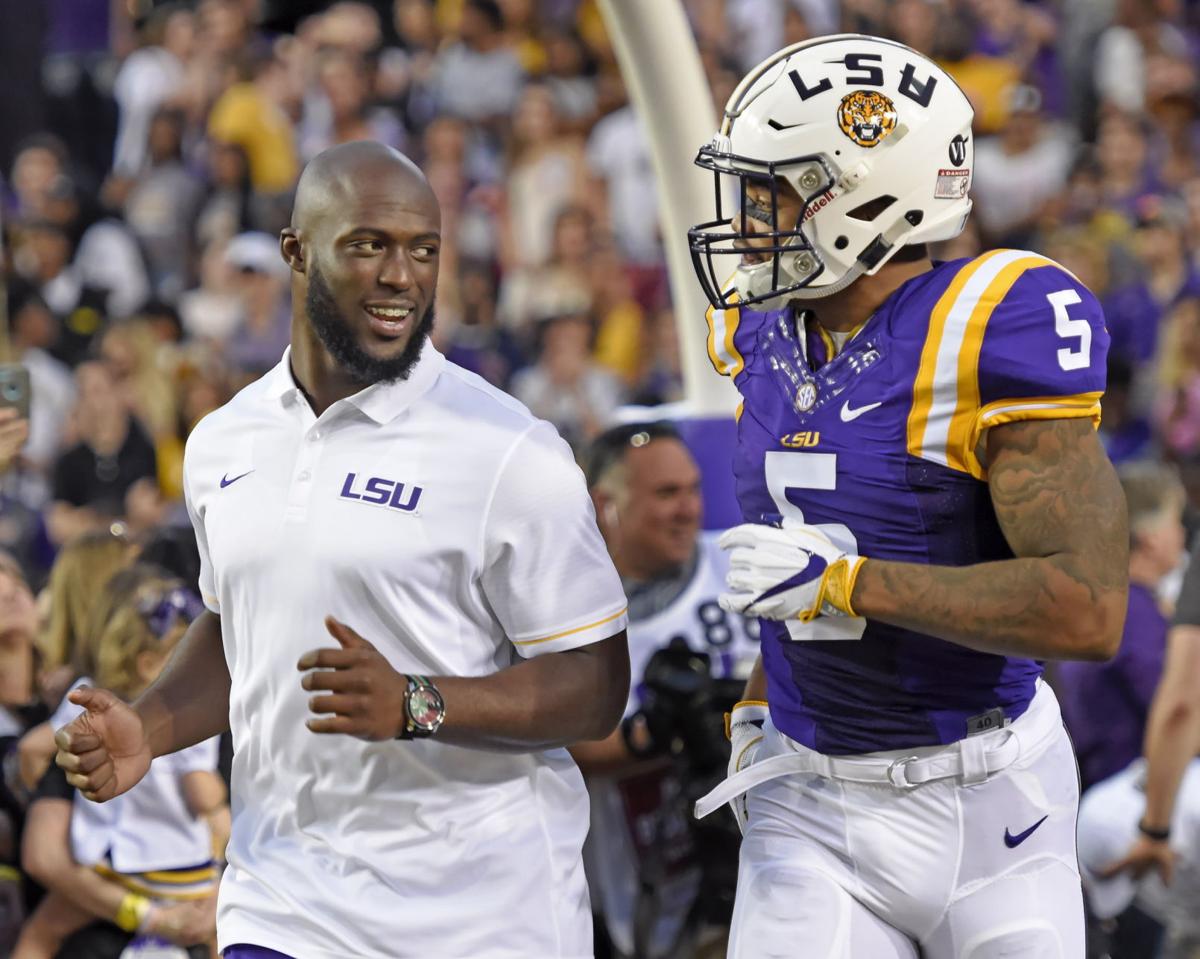 LSU running back Leonard Fournette (7) and LSU running back Derrius Guice (5) chat while running out of the tunnel for the first half of the LSU Southern Miss football game Saturday Oct. 15, 2016, in Tiger Stadium. 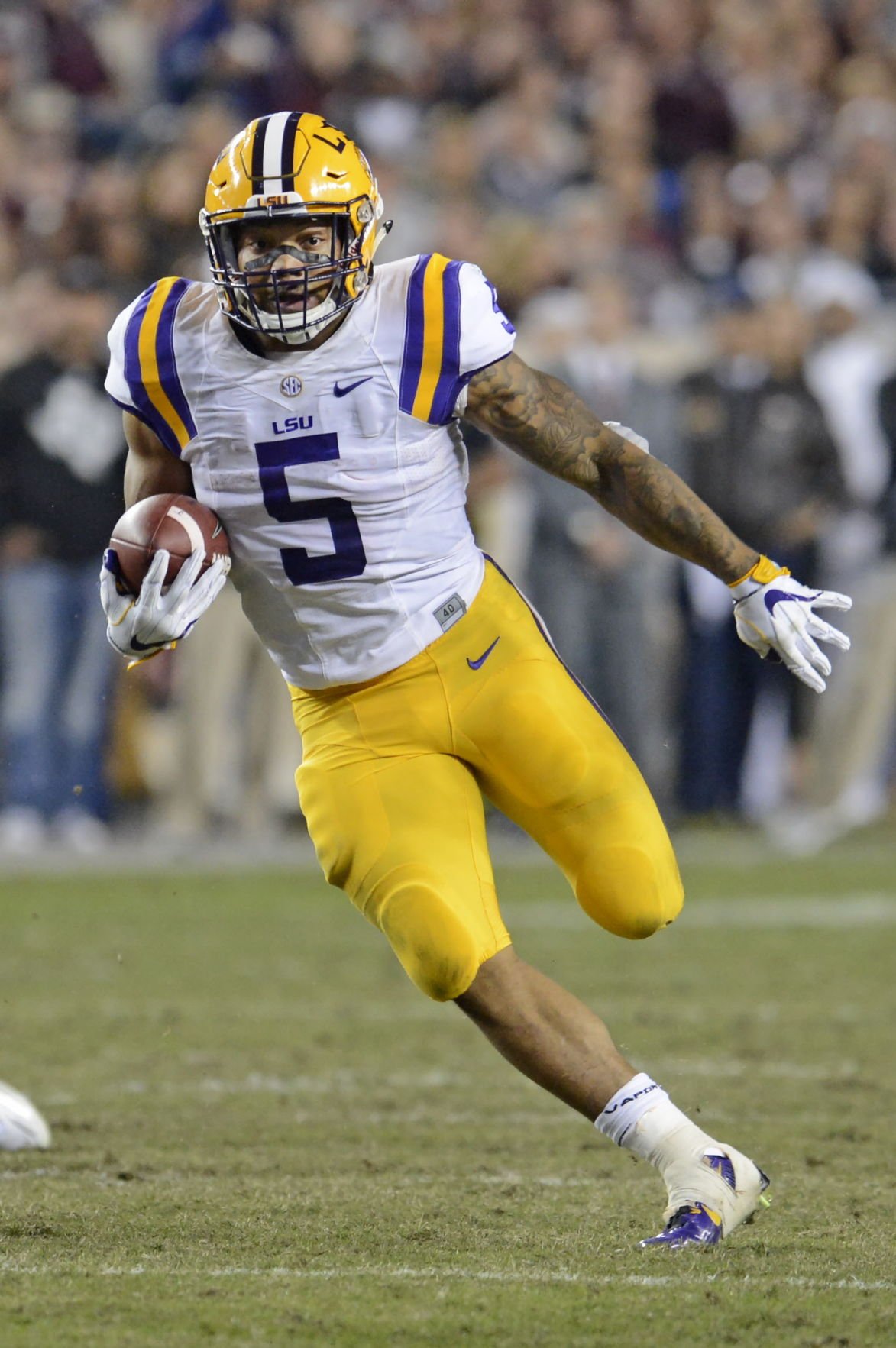 LSU running back Derrius Guice (5) breaks free and runs for a first down in the first half against Texas A&M, Thursday, November 24, 2016, at Kyle Field in College Station, Tx. 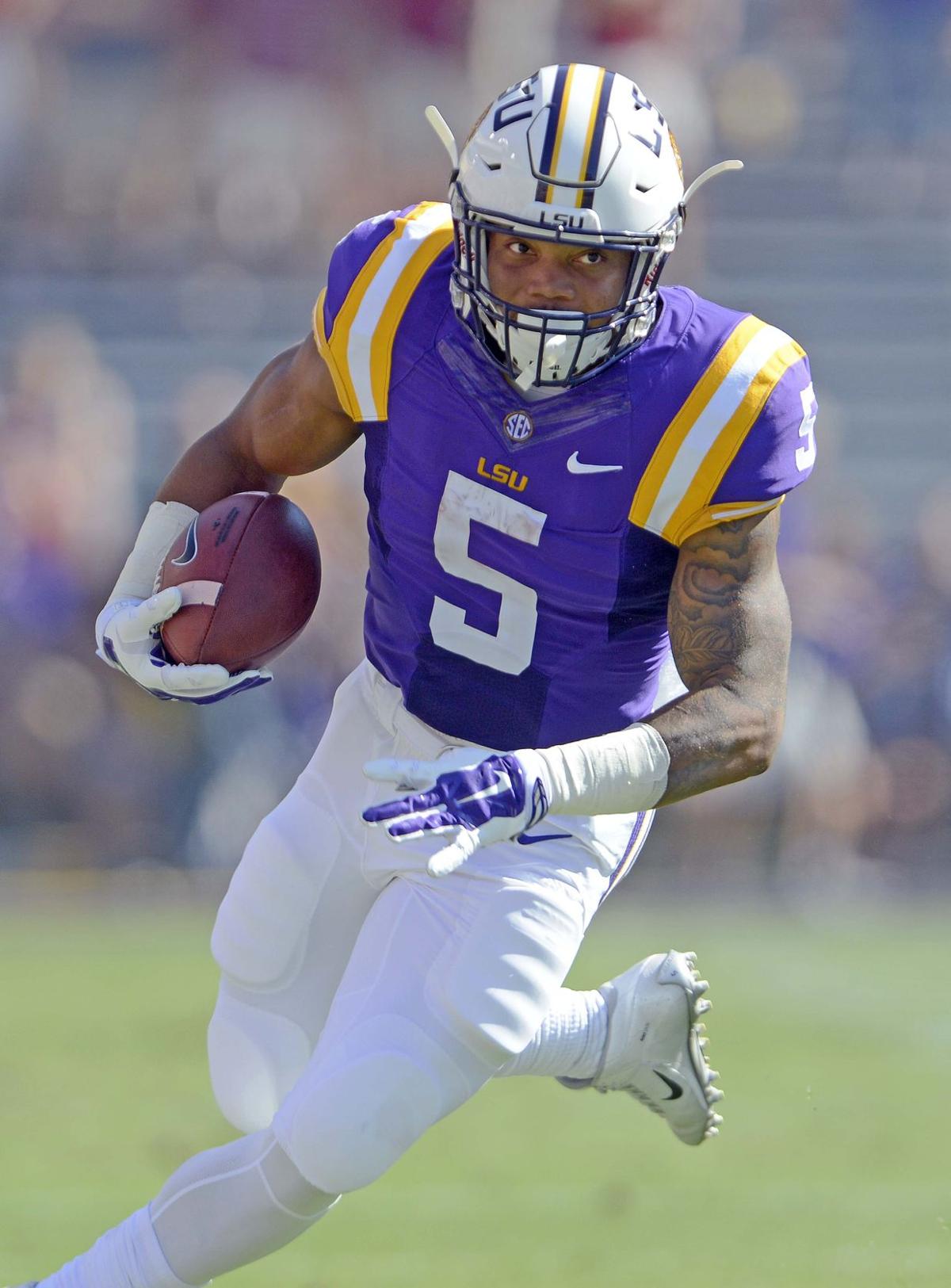 Advocate staff photo by BILL FEIG -- LSU running back Derrius Guice (5) runs upfield for a first down during the first half Saturday, Oct. 10, 2015, in Tiger Stadium. 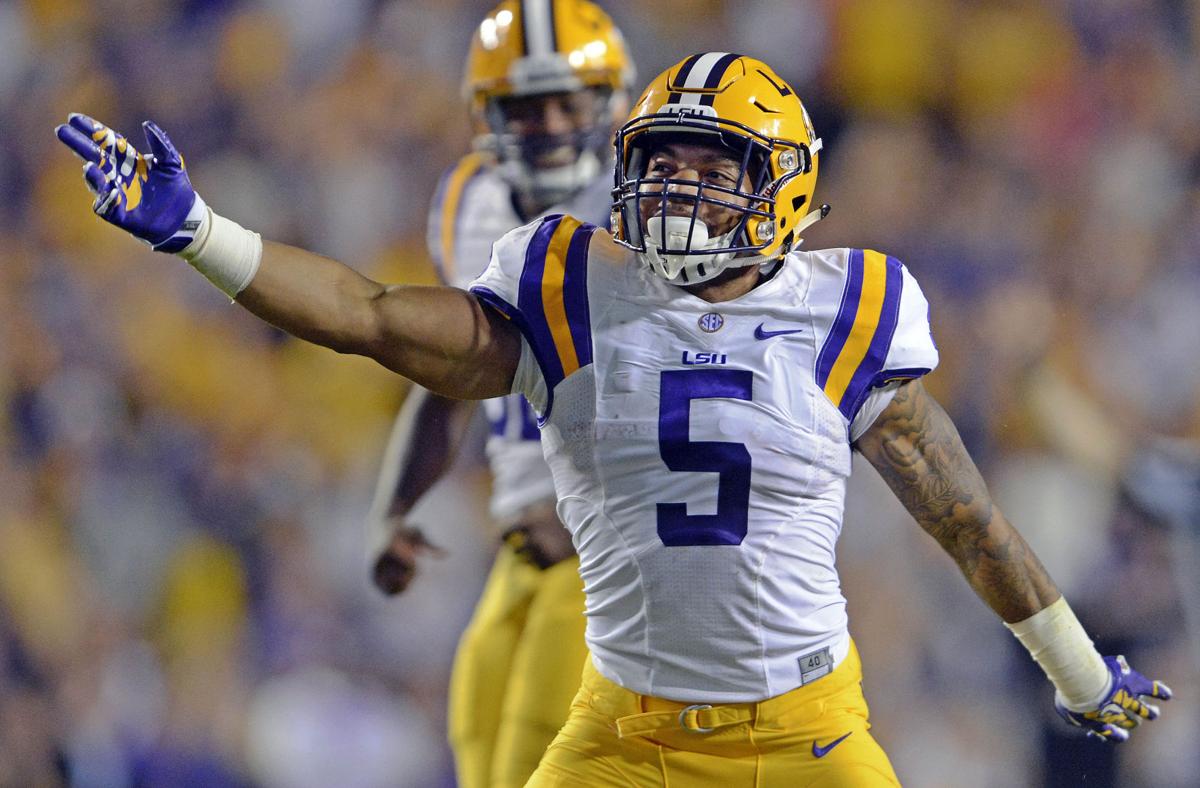 LSU running back Derrius Guice (5) signals first down after the run during the first half Saturday, Nov. 28, 2015, in Tiger Stadium. Guice opens the season in the conversation for the Heisman Trophy. 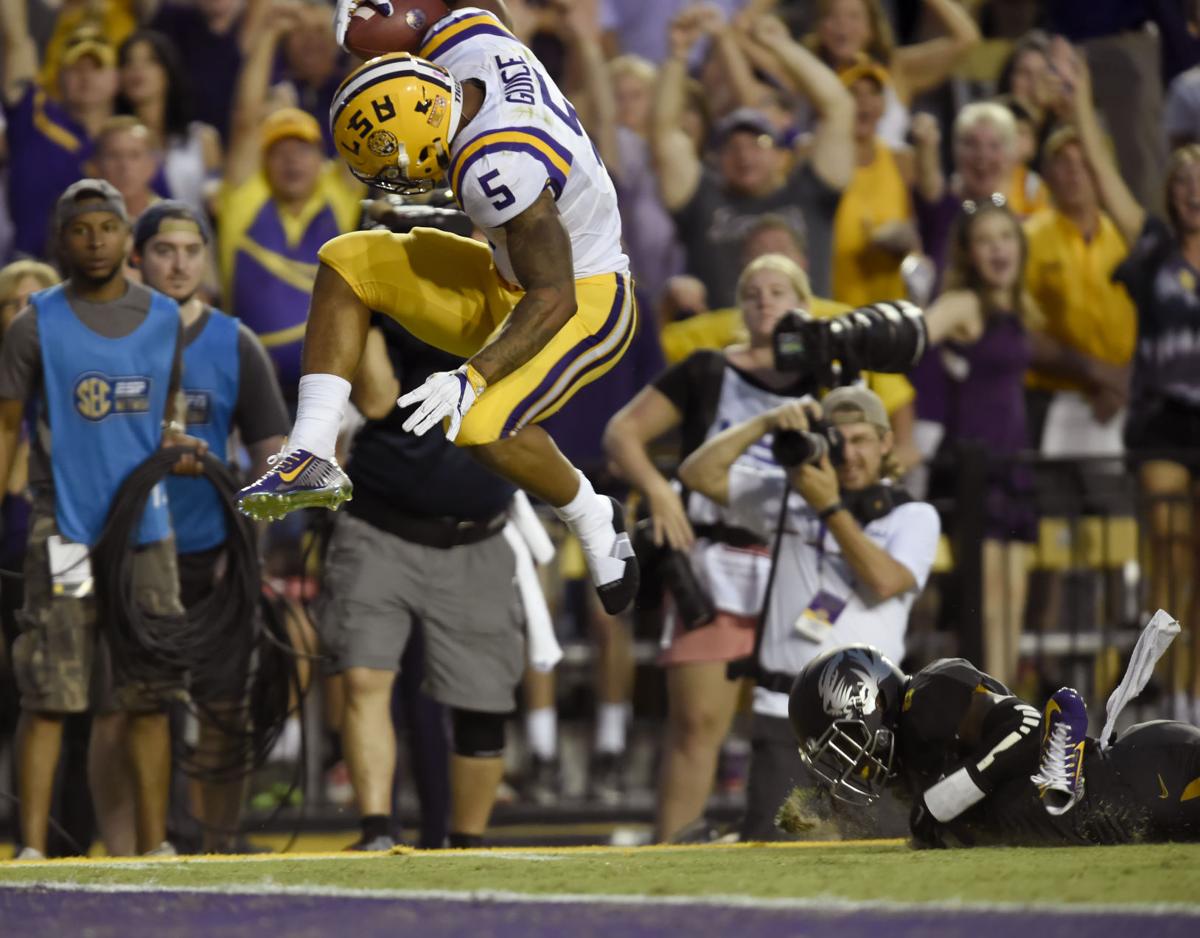 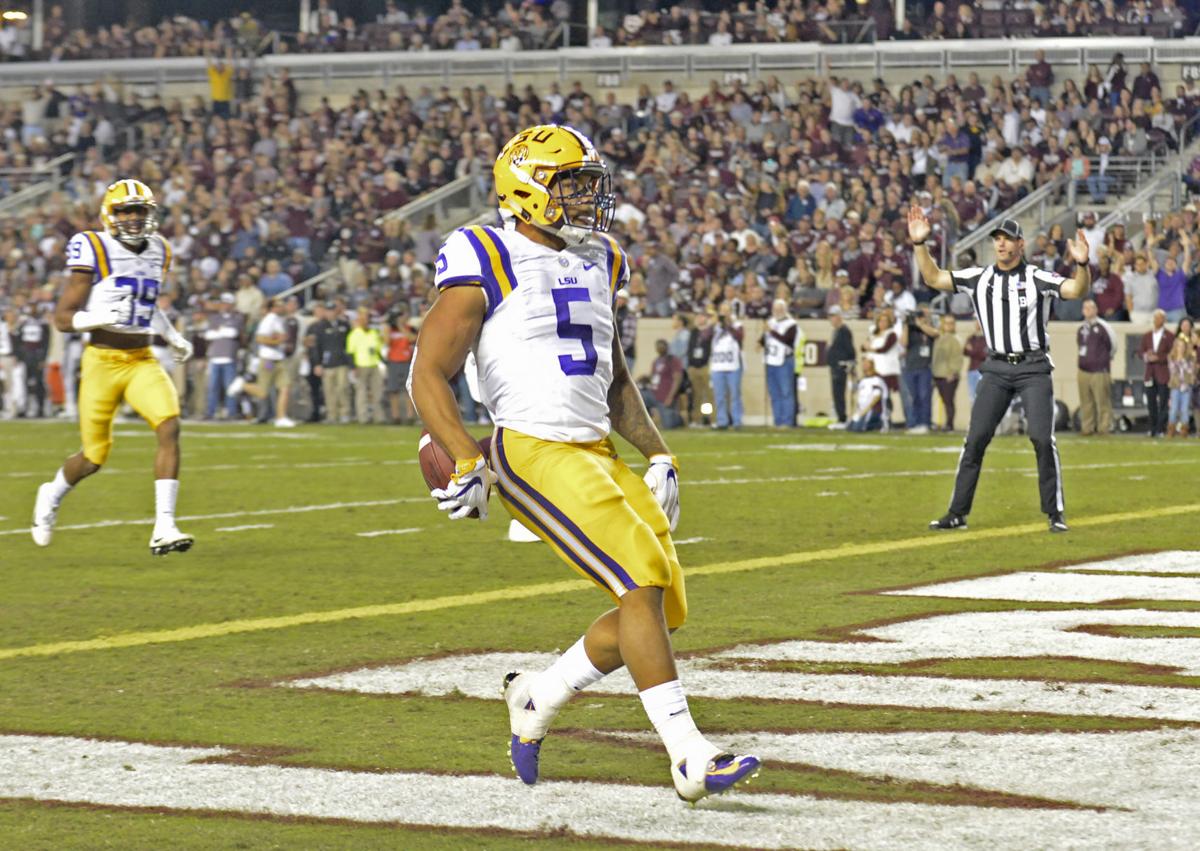 LSU running back Leonard Fournette (7) and LSU running back Derrius Guice (5) chat while running out of the tunnel for the first half of the LSU Southern Miss football game Saturday Oct. 15, 2016, in Tiger Stadium.

Advocate staff photo by BILL FEIG -- LSU running back Derrius Guice (5) runs upfield for a first down during the first half Saturday, Oct. 10, 2015, in Tiger Stadium.

LSU running back Derrius Guice (5) signals first down after the run during the first half Saturday, Nov. 28, 2015, in Tiger Stadium. Guice opens the season in the conversation for the Heisman Trophy.

It wasn’t about eliminating the fullback from an offense that seems like it has always had one. It wasn’t regarding his use of running backs as receivers.

It was about pass blocking.

“His first question was protection,” Canada said in a school-produced video published on LSU’s website.

“ ‘Coach, what’s your protection? What do I do?’ ” Canada said, recalling the conversation. “He takes a lot of pride in himself as a football player.”

The topic of Guice’s first chat with his new offensive coordinator was, more than anything, an example of change in a guy who’s no longer No. 2, a sign of maturity from LSU’s junior tailback that wasn’t necessarily seen in his first two years with the Tigers.

Guice is removed from his role as second fiddle, out from Leonard Fournette’s 6-foot-2, 230-pound shadow and into a spotlight that he admits has overwhelmed him this offseason.

“I've waited my whole life for this chance,” Guice said. “I asked for it. It's my time.”

Guice has landed on multiple preseason All-America teams, was listed by Sports Illustrated as one of its 40 “freaks” in college football and is drawing 15-to-1 betting odds (in the top 15 nationally) to win the Heisman Trophy.

He twirled in the spotlight at Southeastern Conference media days in July, and he’s drawing comparisons to LaDainian Tomlinson and Frank Gore. Already, he’s projected as an NFL draft first-round selection in 2018, ranked as high as the second-best running back among draft-eligible players.

His face has been plastered on a host of preseason college football magazines, something he learned in June on Twitter when a fan shot him a photo of those covers.

“I come from nothing,” he tweeted back. “This is crazy.”

Behind the scenes with LSU's Heisman hopeful: Derrius Guice, pink coat and all, shines at SEC media days

HOOVER, Ala. — Derrius Guice spent hours preparing for his first, and probably only, trip to…

Crazy, maybe, but now expected for a player who usurped an injured Fournette last season, averaging 180 yards in the five games Fournette missed. Guice even topped Fournette’s single-game rushing record in the regular-season finale against Texas A&M, jaunting for 285 yards.

He’s on pace to shatter Fournette’s LSU career record for yards per carry (6.19). Through two seasons and 115 carries, Guice’s per-carry average is a jaw-dropping 7.79 yards.

All of this from a 20-year-old who grew up on the streets of Baton Rouge. Guice is not shy about speaking of his family’s hardships. He needed coaches to drive him to and from school, and his older brother is in and out of prison. His father was murdered years ago, shot and killed in a Denny’s restaurant.

“Thought we’d never make it out the ghetto,” he tweeted this summer. “Now look where we are.”

Where is he? He’s the production leader for a preseason top-25 squad who’s beginning to take a much larger role in the leadership realm. After all, the old voice of the offense is gone, now running for the Jacksonville Jaguars.

“He’s always been a leader to me by the way he practices, and nothing has changed. I see him a little more mature now,” coach Ed Orgeron said. “He comes up to my office and talks about things. I think it’s going to be great for him. He’s not under the shadow of Leonard this year, and I expect him to shine.”

“That’s my little brother,” Fournette said after the game against Ole Miss last October. “I hated that. I don’t want no competition between us.”

The two are close. Just a few weeks ago, Guice sought advice from Fournette on how to handle his trip to SEC media days.

They stay in contact. Big brother still pushes little bro, even from 600 miles away.

The college football watch list season has finally drawn to a close, with the guarantee that…

“I’m the same Derrius that I was last year behind Leonard. He’s just a step higher,” said Guice, who readily admits that he plans on turning pro after this year. “I wish to be next. I learned a lot from him while he was here, and he learned a lot from me, as he says. I’m just happy I was able to learn from him while he was here. That’s a legend to me.

“If I asked him,” Guice continued, “he’d tell me to be better than him.”

That won’t be easy.

Guice’s career numbers are hampered by Fournette’s presence during his freshman and sophomore seasons. He’s more than 2,000 yards short of Fournette’s total rushing yards (3,830) and 22 touchdowns shy of the TDs mark.

That said, don’t count out the former Catholic High star. He’s an explosive runner, routinely ripping off big plays. In fact, Guice opened a scrimmage during camp by running for a 60-yard touchdown.

This is nothing new. Guice’s breakaway runs last season led all draft-eligible returning running backs in college football. One in every nine carries by Guice went for 15 yards or more last season, and nearly 60 percent of his total rushing yards were on those runs, according to analytics website Pro Football Focus.

Guice doesn’t necessarily want to hear those numbers. He doesn’t like comparing himself to others. The fight, for him, is internal — something he’s fought since age 6, he said.

“I’m competing against myself. That’s how I look at it. Just like with boxing — you’re fighting against yourself. Other guy is just in your way. That’s how I look like,” he said. “I don’t look at other people, compare and watch other people like that. I feel like I run different from everybody. Me watching them is pointless. I learn stuff by going out on my own and doing it. I can’t learn by looking at somebody else. That’s not going to help me learn.”

What helped? Being thrown into a starting role last season with Fournette’s injury situation. Guice didn’t expect such a banner sophomore year. He figured his time was 2017.

He got a head start.

The struggle came in pass protection. PFF ranked him 65th among returning running backs in that category, using grading from the 2016 season. He knows it’s an area where he needs to improve, a reason behind that initial discussion with Canada.

“It started happening sooner than we thought last year,” Guice said. “I had to step up and mature quickly.”

And, now, here it is. This is his season, a full season, with Guice set to be the Tigers' workhorse, the local kid from a tough upbringing, the high school star who has been mostly in the shadows.

“There’s nothing better than representing your hometown,” Guice said. “Me being here for 20 years, now I’m the face of it.”

How Derrius Guice and Leonard Fournette stack up in some of LSU’s game, season and career rushing records. Keep in mind that Guice still has at least one more season remaining.

Leonard Fournette weighs in on LSU's Derrius Guice: 'He never was in my shadow'

Leonard Fournette may be busy in his first NFL preseason with the Jacksonville Jaguars, but the former LSU star isn't oblivious to the goings …

Here's your one-stop shop for all the LSU football storylines as the Tigers approach their season-opener vs. BYU.

The long road back from an ACL tear recently got longer for former LSU star Derrius Guice.