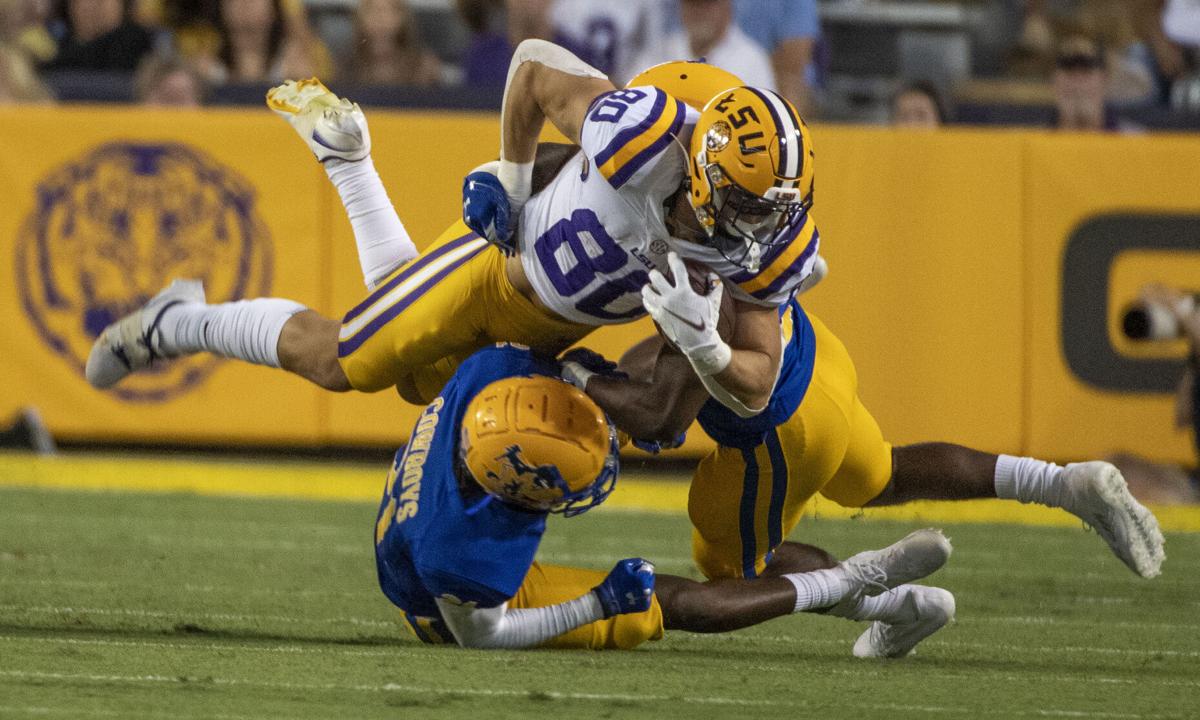 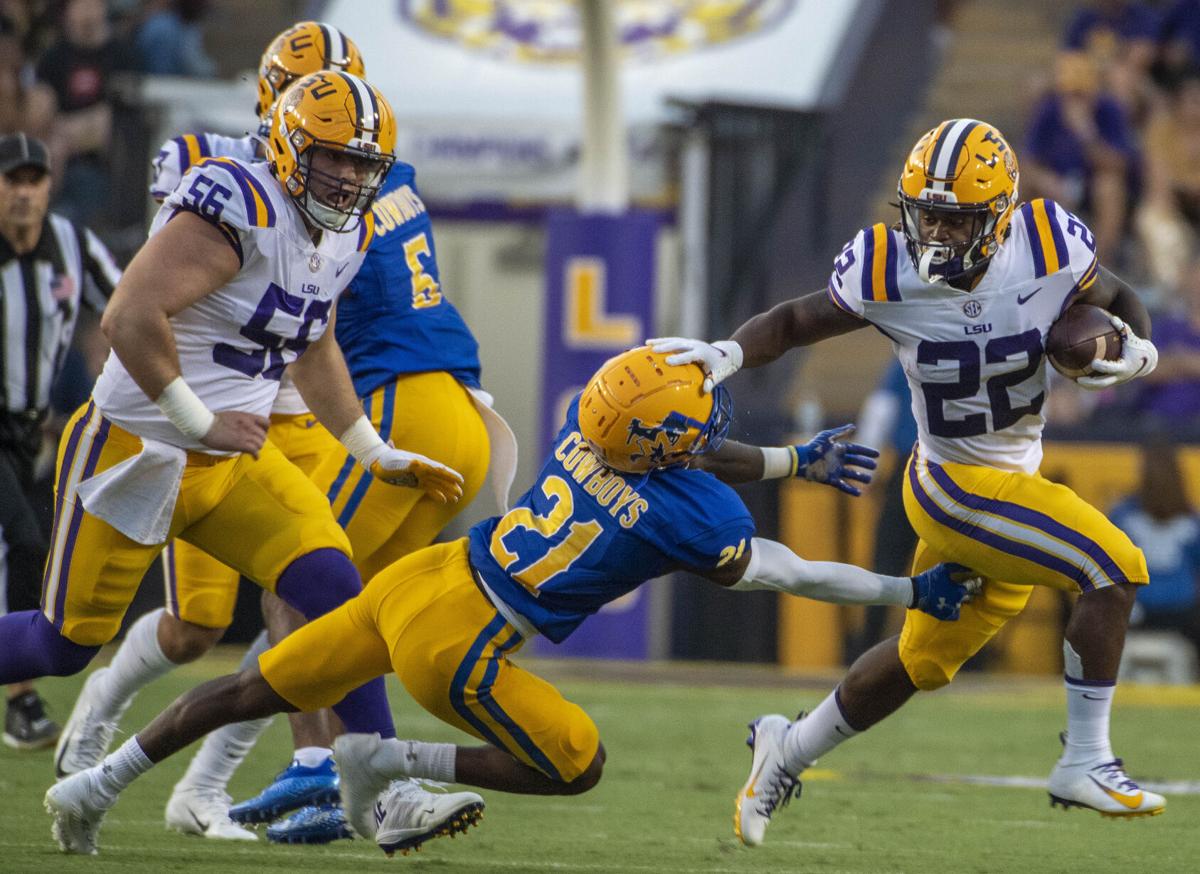 McNeese State defensive back Andre Sam (21) can't make the stop on LSU running back Armoni Goodwin (22) during the first half at Tiger Stadium on Saturday Sept. 11, 2021. 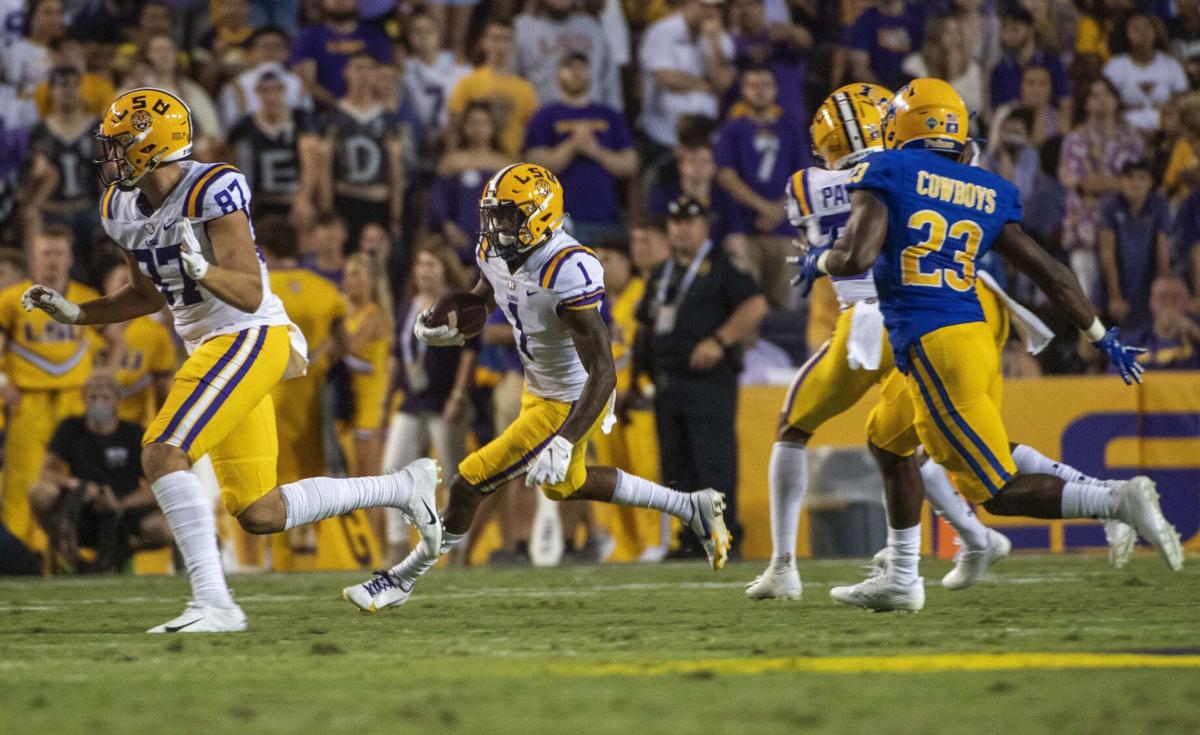 McNeese State defensive back Andre Sam (21) can't make the stop on LSU running back Armoni Goodwin (22) during the first half at Tiger Stadium on Saturday Sept. 11, 2021.

This was supposed to be a tune-up for LSU. Despite having nearly two dozen players unavailable and its flaws exposed last weekend, a game against McNeese State looked like an opportunity to show the team had improved, that one loss on the road hadn’t changed the perception of an entire season.

The Tigers won 34-7 as the defense dominated McNeese State, but they struggled offensively against a team that lost last weekend to Division II West Florida, doing little to assuage concerns about the offensive line and how the team will fare when it begins the Southeastern Conference schedule.

“We took a step from last week by winning, but we have to be better on the offensive side of the ball,” sophomore quarterback Max Johnson said. “The defense played lights out.”

Rabalais: With LSU's offensive line struggling, its foundation is built on sand

LSU’s offense reminds me of that recent commercial where the guy shows his landlord a water stain on the ceiling.

LSU’s offense stalled for long stretches, unable to find much rhythm until late in the second half. Its first touchdown drive required two fourth-down conversions. The Tigers (1-1) punted seven times. The offensive line struggled to push an FCS opponent, though the group played without three starters and a key backup.

Having so many people unavailable barely made a difference on defense. After losing to UCLA last weekend, coach Ed Orgeron wanted LSU to stop the run and eliminate crossing routes. Senior defensive end Andre Anthony said McNeese State (0-2) tried to exploit both areas and ran some of UCLA’s plays.

But the Tigers’ defense controlled the entire game. Led by Anthony and freshman defensive tackle Maason Smith, the group allowed 147 yards — an average of 2.4 yards per play — and most of them came in the fourth quarter. The defensive line constantly chased Orgeron’s son, Cody, the quarterback for McNeese State. LSU recorded eight sacks and 16 tackles for loss.

LSU fans happy to be back at Tiger Stadium, despite pandemic: 'Great vibe; everybody's out'

“The first couple plays were kind of weird,” Orgeron said. “After that, I knew Cody could handle it.”

The pressure rattled McNeese State. As LSU overpowered a smaller offensive line, the Cowboys averaged 1.3 yards per carry. LSU forced three-and-outs on eight of McNeese State’s 15 possessions. The Cowboys punted 12 times. Their three other drives ended with a fumble, a halftime kneel down and a touchdown against backups.

But an offense that left the opener with multiple issues didn’t ease many concerns.

“As an offense, I’m really not disappointed, but I feel like we could have did more,” sophomore wide receiver Kayshon Boutte said. “It should have never been a close game at all. We should have put up 60, but I mean, you’ve got to learn from your mistakes.”

As it plays McNeese State, LSU football without at least 22 players

LSU had at least 22 players without pads on against McNeese State.

During the loss to UCLA, LSU struggled to run the ball and pick up blitzes as it maintained the one-on-one blocking scheme that was a vital part of the offense the last few years. The concept allowed the Tigers to stretch the field. As long as the offensive line blocked well, LSU could use four or five receivers to strain defenses.

Practice this week focused on fixing both problems. Orgeron wanted more variety in LSU’s run calls to help the linemen. But even though LSU had to shuffle the offensive line — redshirt freshman Xavier Hill started at left tackle, sophomore Charles Turner played right tackle and sophomore Marlon Martinez handled right guard — it struggled to control the line of scrimmage.

“We still had some protection problems,” Orgeron said. “We need to look at it. Whether it’s personnel or whether it’s scheme, we need to fix it because people are still going to come after us.”

Orgeron said LSU tried speed sweeps, tosses and counters to push the ball outside. The Tigers still finished with 103 net yards rushing, an average of 2.9 per carry. They also allowed three sacks. At one point in the second half, only one drive had gained more than 28 yards.

Three and out: Scott Rabalais breaks down LSU's 34-7 win over McNeese State

“I think we just started slow,” Johnson said. “We called some of the same calls, but we just have to figure it out, bring more diversity, and I think we are going to do that.”

LSU grabbed the lead in spurts. Johnson threw a 19-yard touchdown on fourth down to Trey Palmer, the first of the junior wide receiver’s career. Johnson tossed another touchdown after sophomore Jaquelin Roy forced and recovered a fumble, giving LSU prime field position in the second quarter.

The Tigers’ next drive crossed midfield then ended with a sack, setting up a 55-yard field goal for junior Cade York. He crushed the attempt, setting a Tiger Stadium record. Then, with a chance to further stretch its lead on a final possession before halftime, LSU went three-and-out. It led 17-0 at halftime.

“I feel like we could make better calls at the beginning of the game and start faster and read the defensive schemes and come up with good offensive plays to execute,” Boutte said.

While its defense continued to shut down McNeese State, LSU eventually pulled away. Johnson threw another touchdown to Boutte, who has five this season, near the end of the third quarter when the first-team offense put together its best drive of the half.

LSU began to insert its backups, something it hoped to do in a game against a theoretically overmatched opponent. Freshman quarterback Garrett Nussmeier played an entire quarter. Freshman running back Corey Kiner scored his first career touchdown on a 23-yard run in which he broke multiple tackles. York broke his own record with a 56-yard field goal.

The Tigers won. In some ways, they moved on from the season-opening loss. But with one more game until they begin their SEC schedule, they’ll have to continue to address areas of concern. One week didn’t erase every issue.

“All these routes and all these good receivers running down the field,” Orgeron said, “if we can’t protect the quarterback, it’s not going to work.”

Former LSU star receiver Ja'Marr Chase struggled with drops during the preseason with the Cincinnati Bengals, but the 2021 first-round selecti…