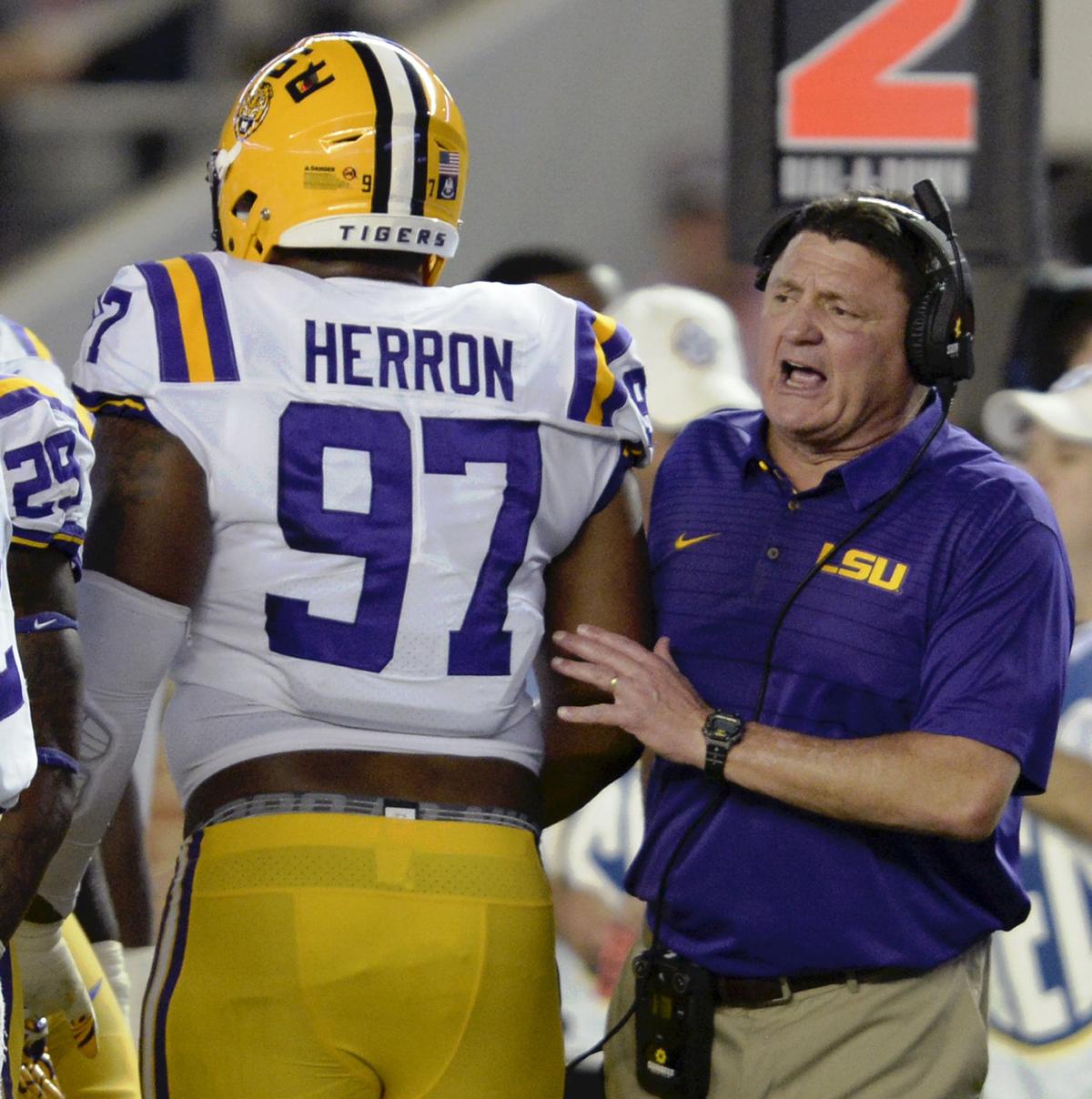 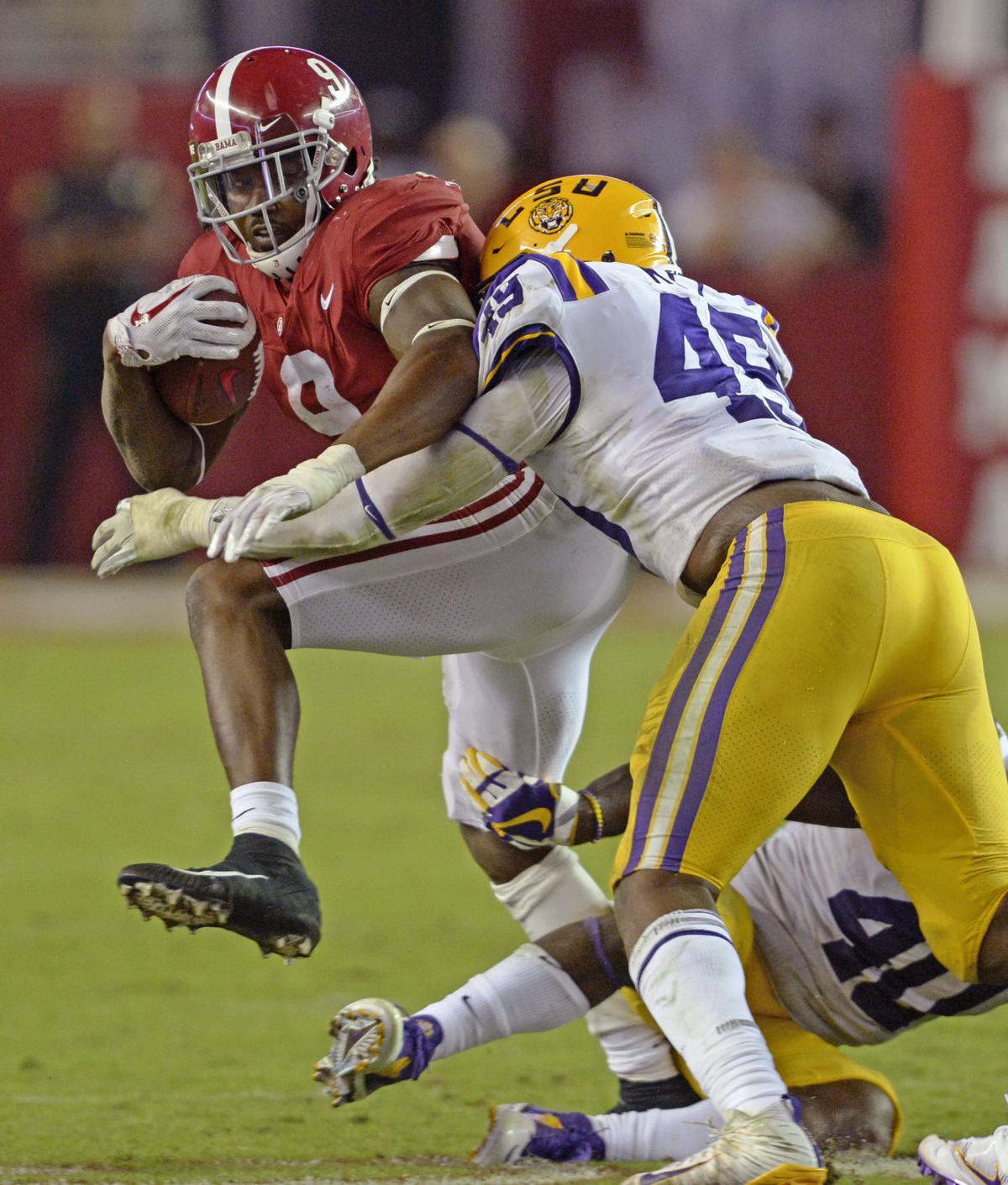 LSU linebacker Arden Key (49) makes the stop on Alabama running back Bo Scarbrough (9) during the second half of LSU's football game against Alabama at Bryant-Denny Stadium Saturday Nov. 4, 2017, in Tuscaloosa, Ala.. Bama won 24-10.

LSU entered this summer with what looked like a sturdy, deep and talented defensive line.

Two fifth-year seniors, Greg Gilmore and Christian LaCouture, anchored the unit. The surprise of the spring, Rashard Lawrence, was the bell cow at defensive end. Edge rusher Arden Key had returned to the team after his leave of absence, poised for another record-breaking year, and behind him sat talented young players like freshman K’Lavon Chaisson and redshirt freshman Andre Anthony.

Grizzled seniors like Frank Herron and Deondre Clark were expected to rotate at defensive end, and sophomore Ed Alexander supplied Gilmore with a hefty, run-clogging backup to gobble up double teams.

Then the you-know-what hit the fan.

Lawrence missed three of the first five games battling injuries to both ankles; Key was 20 pounds overweight, finally arriving at game shape deep into October; and Herron was suspended for the first six games.

Alexander came into camp overweight after summer surgery and then broke his finger in Game 3 at Mississippi State.

Clark, meanwhile, never evolved into a rotational player, and Anthony hasn’t played yet, expected to miss the rest of the season after an injury in camp resulted in surgery on his foot last month.

“You’ve got to have bodies to compete,” said Cole Cubelic, the former Auburn center who now serves as a sideline reporter for SEC Network. “I was there last month. Talking to Pete (Jenkins, LSU's defensive line coach), where he was from a numbers perspective ... you didn’t have a lot.”

Finally, the LSU defensive line is taking shape after a rough first two months. The best sign of proof came last Saturday in a 24-10 loss at No. 1 Alabama.

Coach Ed Orgeron and Jenkins’ line flexed the kind of muscle against the Tide’s offensive line that most didn't really expect.

The Tigers stuffed the run, holding Alabama to a season-low 116 yards. They swarmed the quarterback, sacking Jalen Hurts a season-high four times. And they helped LSU’s defense force Bama into — you guessed it — a season-high six three-and-outs.

“We did not get pushed around. We did the pushing around in a lot of instances,” Orgeron said. “I thought our guys did a tremendous job going toe-to-toe in the trenches.”

The guys are, for the most part, healthy. And a few of them, despite being two months into the season, are as fresh as if this were Week 2.

Herron is one of them. He’s even developed a nickname.

“A lot of guys are (calling me) ‘Fresh Leg Frank’ when I’ll be running around,” he said laughing. “I feel real good.”

Coming up empty: Why DJ Chark and Danny Etling couldn't connect in LSU's loss at Alabama

The first one eats at Danny Etling.

Herron’s return is one of many boosts for the defensive line. Orgeron called his outing at Bama his “best game.” Also, Key is rounding into game shape, down to 250 pounds, and Lawrence and Alexander are nearing full health.

The unit is morphing into the sack-crazed group many expected it would be in the preseason. LSU (6-3, 3-2 Southeastern Conference) is on pace, at 3.3 sacks a game, to have its most sacks in a season since the 2003 national championship squad had 44.

They’ve got 30 sacks with three regular-season games and a bowl game left. That ranks sixth nationally and second in the league.

Against Alabama last week, they pressured Hurts on about half of his dropbacks. It still wasn’t enough for some.

“We need a little more pass rush on the play actions to help the deep ball. That’s what us, our group as a D-line, we can help as a team. A little bit more rush could have helped,” an emotional Greg Gilmore said after the 24-10 loss. “We need to rush every play. If we got three or four (pressures), we need six or seven. That’s what we can contribute to the team, as far as stopping (their) deep balls and throwing game.”

They get their chance this week against an Arkansas team that’s one of the nation’s worst in pass blocking. The Razorbacks (4-5, 1-4) have allowed 28 sacks this season, the most in the SEC and 117th in the nation. In five games against SEC competition, coach Bret Bielema’s group has given up 23 sacks, or 4.6 per outing.

LSU’s line is arriving at full strength in time for a final stretch of opponents that hold one similar weakness: pass protection. Tennessee, next week’s opponent, is 107th nationally (25) in sacks allowed and Texas A&M, the regular-season finale, is 93rd (23 sacks).

Herron and Co. are prepared for the stretch, their final one with the Tigers.

Herron, LaCouture and Gilmore all walked into the LSU team room in unison Monday for interviews, each following the other before reporters circled them for question-and-answer segments.

They are each fifth-year seniors playing their final games, the old men of the team.

Reminded that he is also a fifth-year senior, Herron chucked, “That’s right!”

Herron entered camp as a “co-starter” with LaCouture, Orgeron said then, before he was forced to miss the first six games for suspension. The 308-pounder is still not at the playing weight he’d like (300 pounds), but he’s getting there, having already lost 5 pounds since his first game against Auburn.

How’s he feel? Like the rest of the line, he feels great.

“My body is fresh. I feel like I’m ready,” he said. “This past game is going to help me for the next three games — where I can play all out.”

Arkansas has allowed 28 sacks overall this season, including 23 in its five SEC games. Here were their sacks allowed in each:

LSU is on pace to nearly match the number of sacks from the 2003 national championship team.