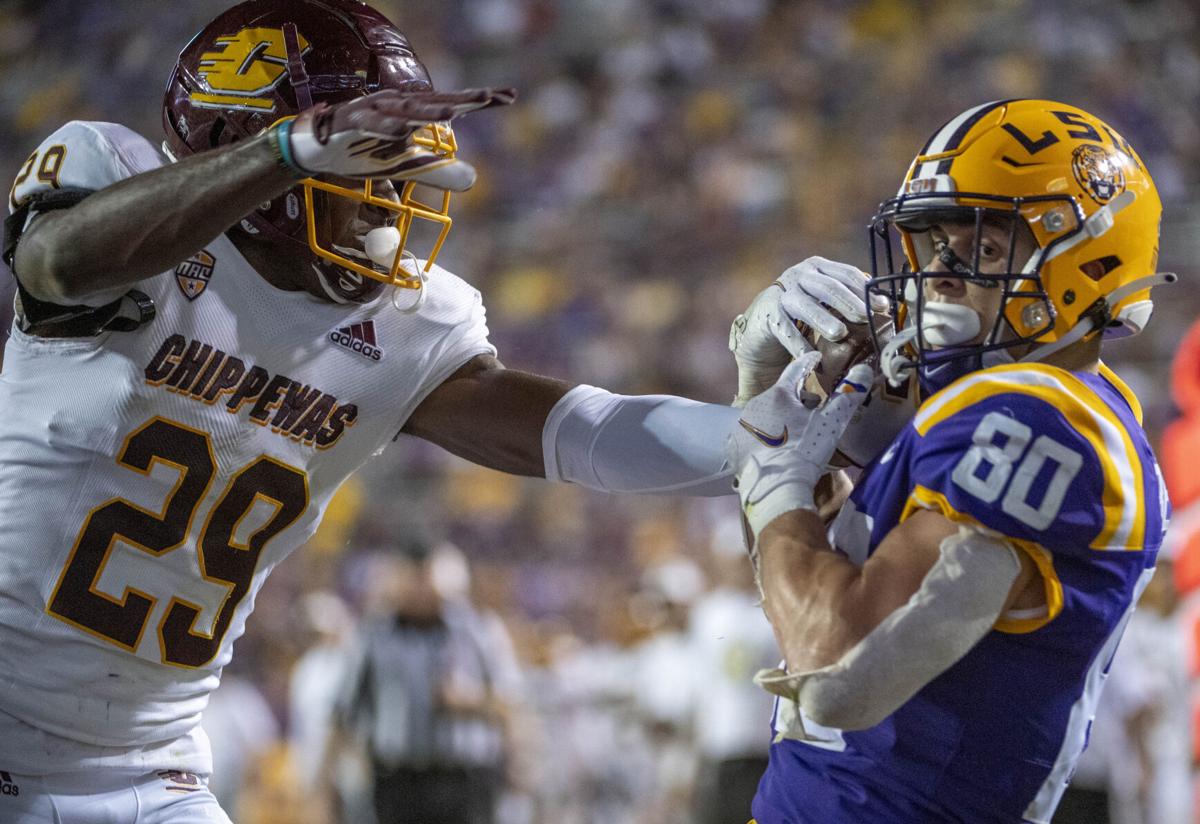 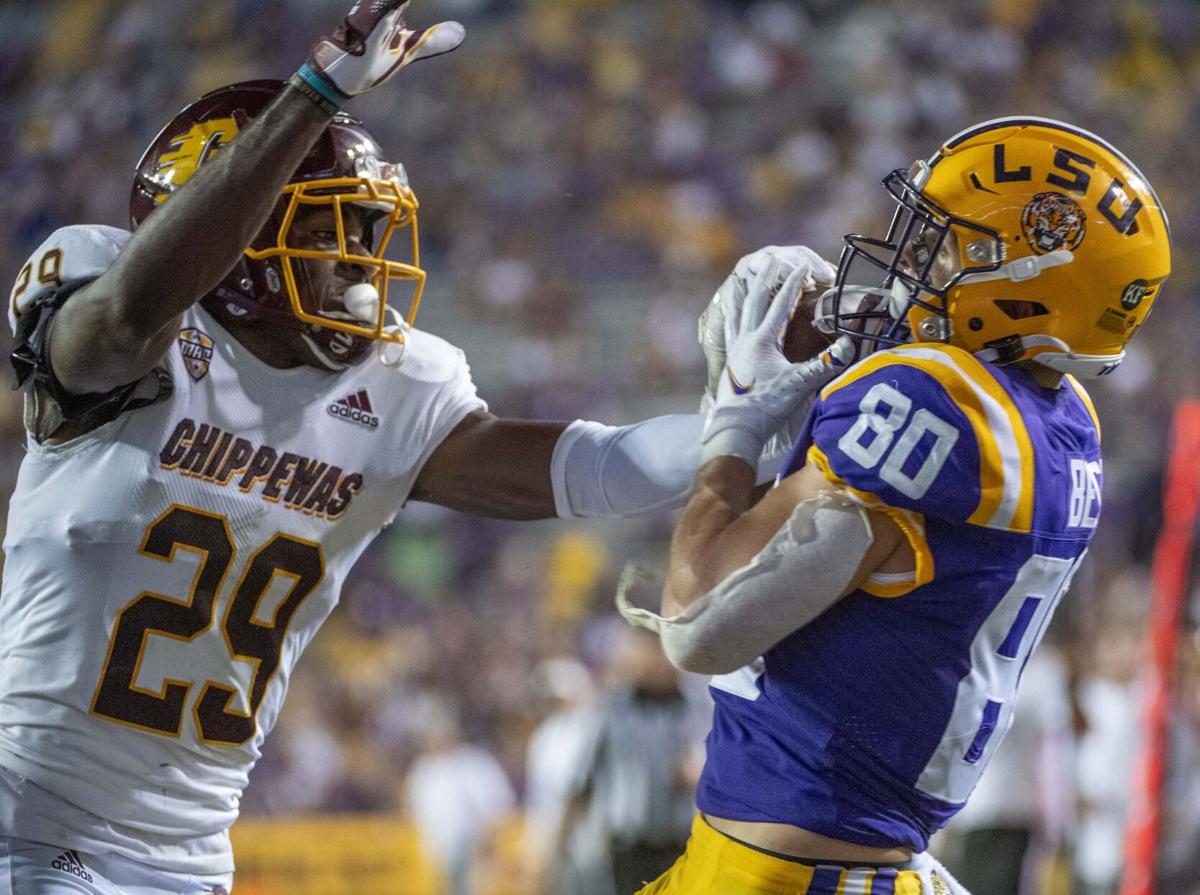 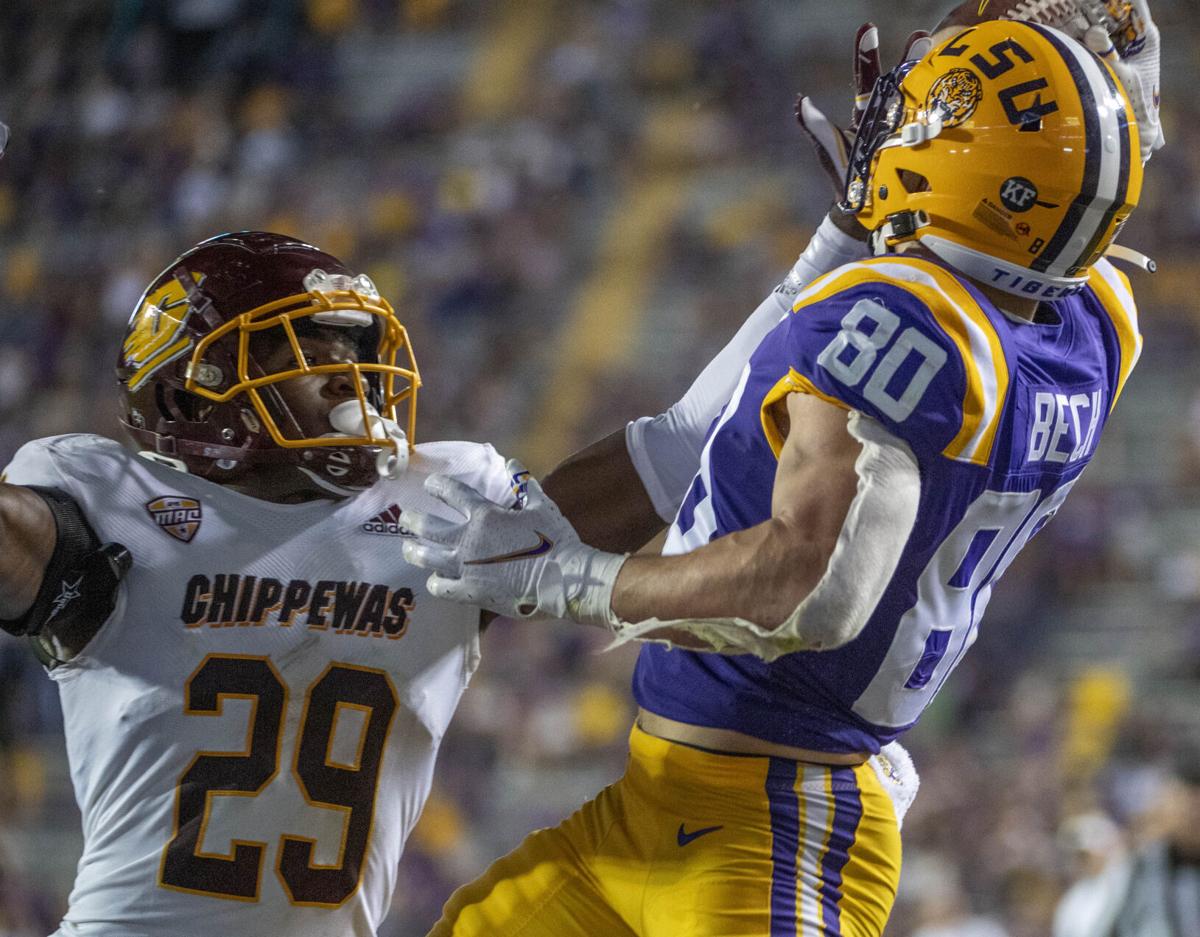 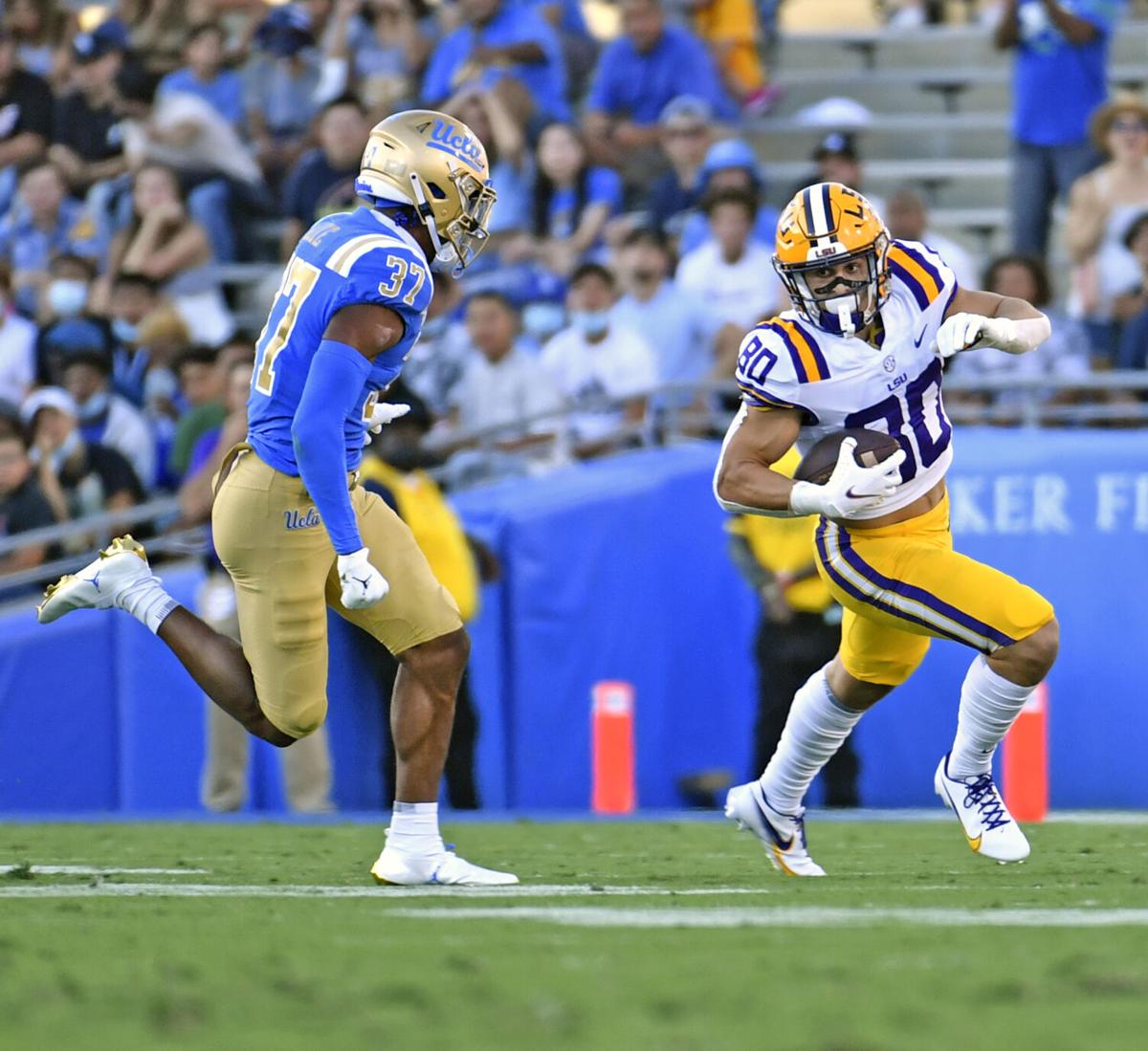 LSU wide receiver Jack Bech (80) runs the ball past UCLA defensive back Quentin Lake (37) in the first half, Saturday, September 4, 2021, at The Rose Bowl in Pasadena, Cali. 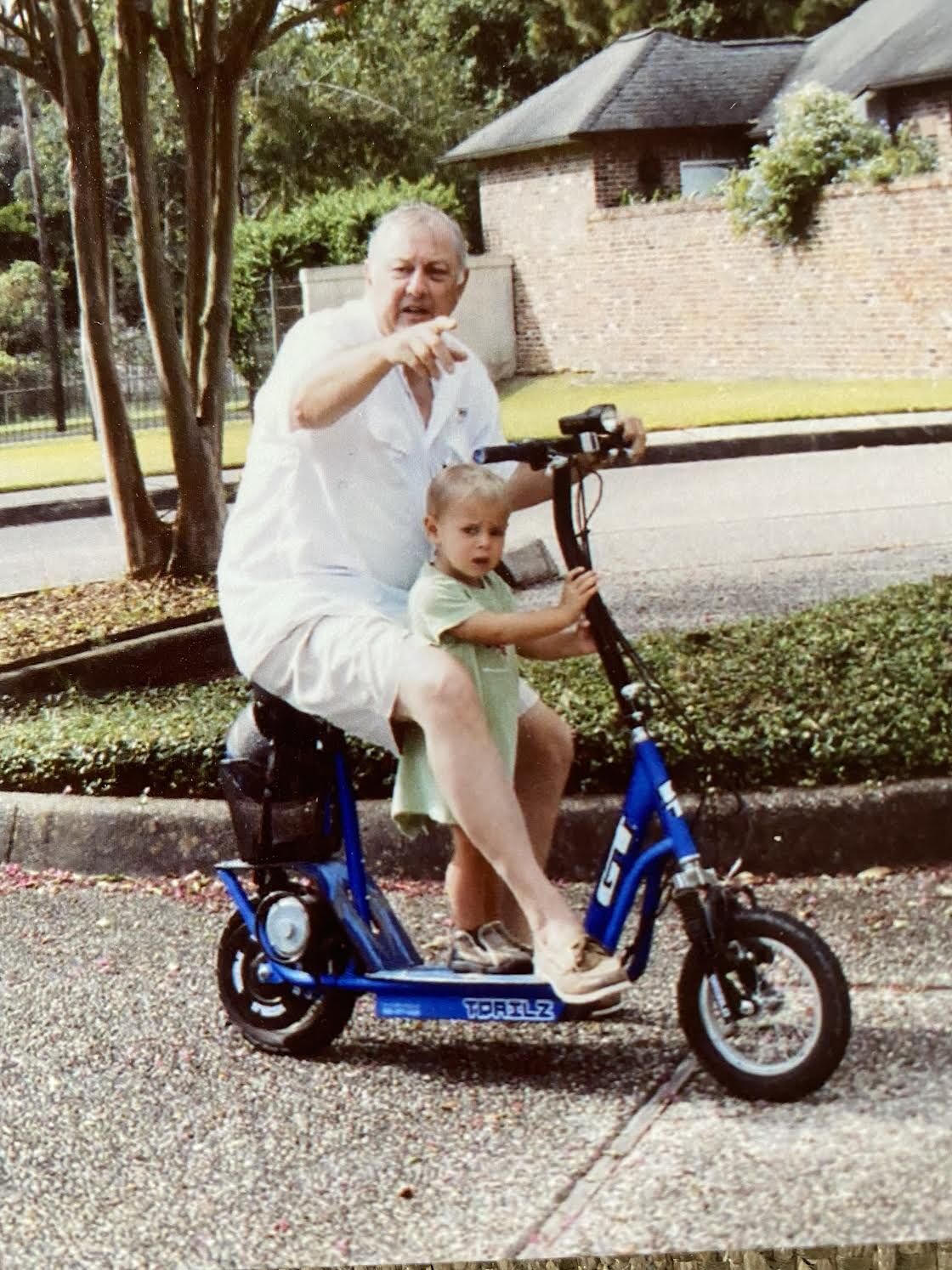 Jack Bech rides on a scooter with his maternal grandfather, Judson Voorhies. Jack called his grandfather "Pop." He writes the name on his eye black before LSU's games. 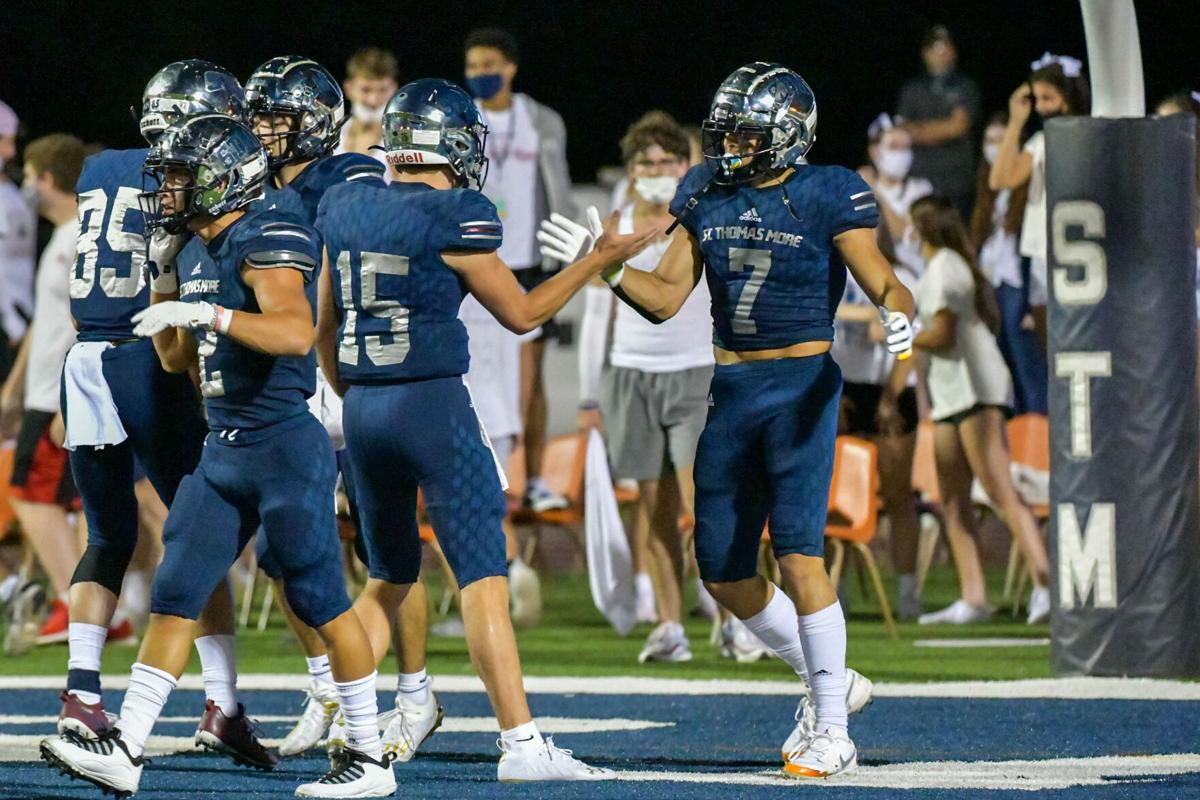 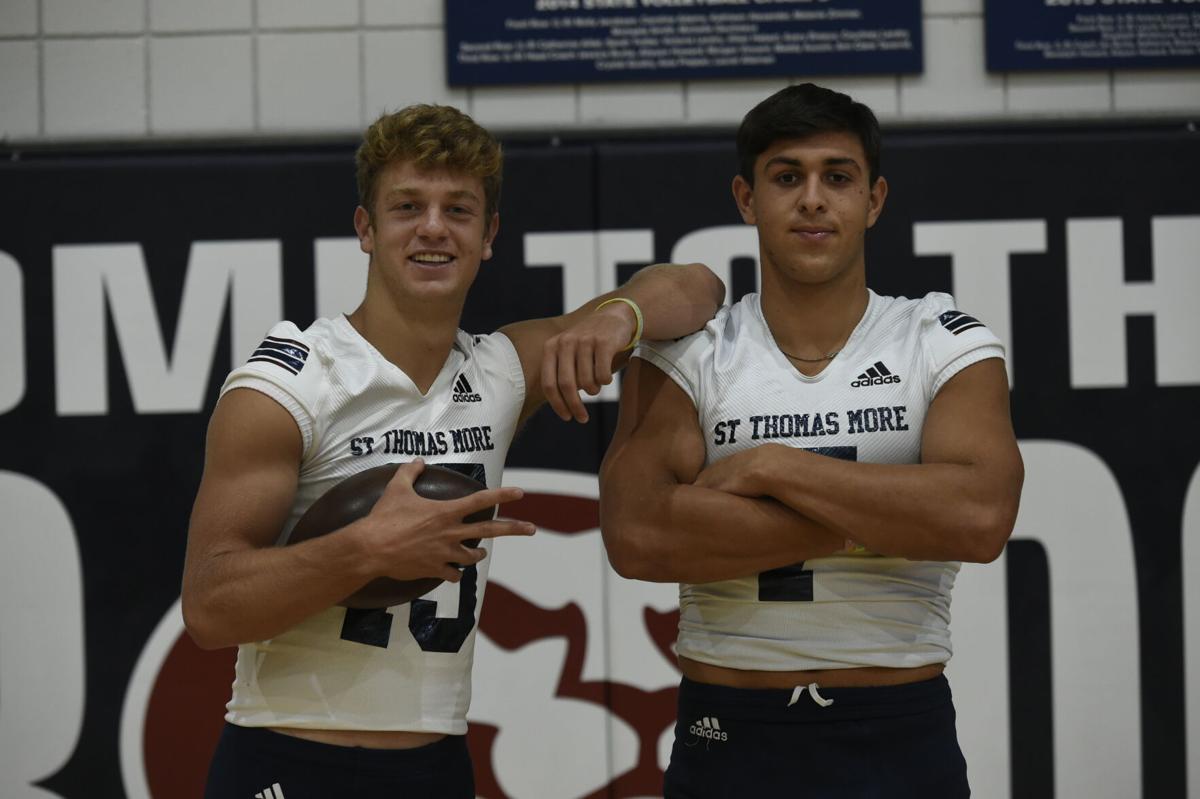 LSU wide receiver Jack Bech (80) runs the ball past UCLA defensive back Quentin Lake (37) in the first half, Saturday, September 4, 2021, at The Rose Bowl in Pasadena, Cali.

Jack Bech rides on a scooter with his maternal grandfather, Judson Voorhies. Jack called his grandfather "Pop." He writes the name on his eye black before LSU's games.

The three names stretched across Jack Bech’s face as he described his first career touchdown. No one had asked about them, but Bech wanted to make sure everyone knew who they were. He pointed at the silver letters written on his eye black.

“This is my motivation right here,” Bech said. “This is who I do it for.”

Then Bech recounted the catch, a one-handed grab in the corner of the end zone last weekend. He had lined up in the slot against Central Michigan. As he released after the snap, Bech tried to sprint past his defender. He angled toward the sideline.

Only 20 yards from the end zone, he couldn’t create much separation. Sophomore quarterback Max Johnson threw the ball anyway, aiming at his receiver’s back shoulder. The defensive back held Bech’s left arm. Bech turned and pulled the ball into his chest with his right hand.

A man standing behind the end zone gaped. Then he covered his mouth, amazed.

“I made some things shake and bake,” Bech said, “and I made it work.”

After losing 16-14 to Wisconsin in Green Bay to open the 2016 season, followed by wins over Jacksonville State and Mississippi State, LSU’s fo…

The touchdown punctuated Bech’s best game yet. The freshman caught five passes for 81 yards, both career highs. His first three receptions resulted in first downs. A hybrid tight end/wide receiver, Bech also chipped defensive ends and blocked on the outside.

Bech’s role has steadily increased over LSU’s three games. He caught one pass in the season opener. He now has 10 for 155 yards and a touchdown as LSU (2-1) prepares to face Mississippi State (2-1) at 11 a.m. Saturday in Starkville for its first Southeastern Conference game, giving the offense another reliable option.

“He can do a lot of things, whether it's blocking or going up and catching the fade balls with one hand,” Johnson said. “He's what you want at tight end. He's done a great job of getting open, knowing where to be, knowing the plays.”

After Bech’s breakout performance, LSU brought him to a virtual press conference, a rarity for a freshman. He spoke confidently about his position and LSU’s outlook this season, calling the first two games a “fluke.” Then, in the midst of his answers, Bech stopped to recognize the three people he honored on his eye black: Judson Voorhies, Garrison Gautreaux and Kathryn Howard.

Bech had written down “Pop” first, scribbling the name he called his maternal grandfather on the left side of the adhesive strip. Voorhies was an attentive grandfather who rode scooters around the neighborhood with his nine grandchildren and took them to Champagnes Grocery and Deli for hot dogs.

Voorhies loved LSU, just like the grandson he nicknamed “Jackie Boy.” He bought football tickets for the family. One time when they were young, Pop gave Bech and his older brother paintings. One depicted Tiger Stadium. The other showed a giant tiger. They still hang inside Bech’s bedroom back home in Lafayette.

But Pop suffered a stroke in October 2015, and his health declined after that. Strokes became more frequent. He died four years later, surrounded by his family, at age 76. Bech has written “Pop” on his social media bios ever since.

Then there was G, an initial Bech wrote in the middle of his eye black. Gautreaux, 17, went to Notre Dame High School in nearby Crowley. Earlier this year, officers found him unresponsive inside a vehicle as he suffered from a gunshot wound to his chest. He died at the scene.

The death shocked Bech and the surrounding community. The boys knew each other through mutual friends. They both played football, and they had hunted together multiple times. Suddenly, someone a year younger than him was gone. He wanted to keep Gautreaux’s memory alive.

Kat’s name filled the other side of the strip, the abbreviation written underneath Bech’s left eye. Kathryn met her husband, former LSU quarterback Jamie Howard, in college. He played in the ’90s with one of Bech’s uncles, a wide receiver. Another one of Bech’s uncles later played at LSU. His parents graduated from there. The families knew each other well, and they shared a love for the school.

When Kathryn Howard and Michelle Bech had children of their own, their boys became best friends, separated by one year. Walker Howard and Bech both played football. Kathryn and Bech’s mother dreamed of hearing “pass complete from Howard to Bech” over the Tiger Stadium speakers, continuing a family tradition.

Cancer never deprived her of that smile, even as she entered hospice care. Kathryn fought the disease, but after a two-year battle with EHE — a rare cancer that grows from the cells that make up blood vessels — she died on Sept. 27, 2018, a Thursday. Kathryn Howard was 44.

The next day, St. Thomas More played an away game. Walker went. Bech sat next to him during the entire bus ride.

Bech wrote “Kat” and then “Pop” on wristbands in high school as he became one of the best wide receivers in the state, pointing toward the sky after touchdowns, but for him to recognize his loved ones inside Tiger Stadium, he needed a scholarship offer.

Two years after Kathryn’s death and one year after he lost his grandfather, Bech still didn’t have one from LSU. He was a three-star recruit committed to Vanderbilt before St. Thomas More played Catholic High his senior year.

That morning, Bech and Howard went to the cemetery, Bech’s mother said. The gates were locked and trees had fallen because of a storm. They woke up the priest and asked to let them inside.

Pop and Kathryn were buried across a walkway from each other. Bech prayed with his grandfather. Howard visited his mom.

St. Thomas More won the rivalry game later that night with Howard at quarterback and Bech at wide receiver. Bech caught nine passes for 196 yards and two touchdowns. LSU strength and conditioning coordinator Tommy Moffitt sat in the stands. He texted one of Bech’s uncles: “We’ve got to offer this kid.”

LSU’s coaches knew about Bech. But as they watched him again during a weekly film evaluation of recruits, they noticed a player who looked taller, faster, stronger and more elusive than the year before. Ed Orgeron asked the coaches who wanted to offer Bech a scholarship. Everyone raised their hand.

“He was a three-star, but we all liked him,” Orgeron said. “What a great player, man.”

The morning after LSU’s coaches agreed to extend a scholarship offer, they called Bech while St. Thomas More reviewed plays from the last game. Bech stepped into the hall with Howard, who had verbally committed to LSU a few months earlier as the No. 1 quarterback in the 2022 class.

Bech decommitted from Vanderbilt a few days later. He announced his intention to play at LSU within a week, fulfilling a lifelong dream.

After recording 70 receptions for 1,362 yards and 10 touchdowns during a shortened season, including a record 232 yards in the Division II state championship game, Bech arrived as one of the most intriguing players in LSU’s recruiting class.

Bech didn’t receive the fanfare of some of his classmates, but at 6-foot-2 and about 220 pounds, he could provide a versatile option within an offense searching for complements to star wide receiver Kayshon Boutte. He quickly connected with first-year offensive coordinator Jake Peetz. Buzz grew around him during preseason practice as Bech switched to tight end with LSU thin at the position.

“I’m embracing it,” Bech said. “I like getting mean, nasty and physical on the line, but I also like routing people up, going up and getting the ball when the time is needed.”

Bech will develop further. He said he’s still learning how to block defensive linemen, and he’ll improve as a receiver with more experience. He could get taller, too. His mother said his growth plates haven’t closed.

As his career continues, Bech will carry those he lost with him. He prays before games and points toward the sky after touchdowns, often thinking about Pop, G and Kat, the three names on his eye black.

“We're hitting the three-year mark next week,” Walker Howard said of his mother's death. “It's tough, but having people like Jack who represent and carry on that name means the world to us. That's my best friend in the whole world. I've got his back until the end.”

LSU vs. Mississippi State: Our staff makes its picks for the Tigers' contest with the Bulldogs

The Advocate's staff writers predict the outcome of LSU's game against Mississippi State on Saturday in Starkville, Miss.