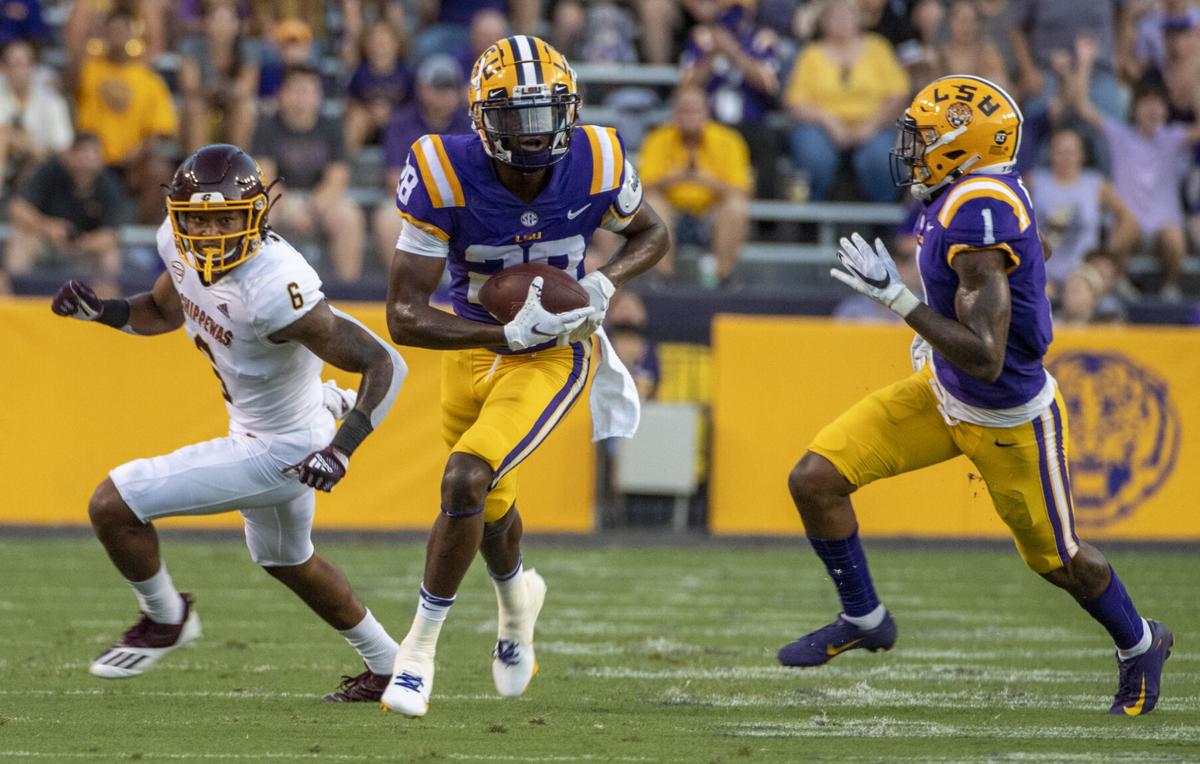 LSU defensive back Major Burns (28) intercepts the pass in front of Central Michigan wide receiver Dallas Dixon (6) as LSU cornerback Eli Ricks (1) comes in to help during the first half at Tiger Stadium on Saturday Sept. 18, 2021, in Baton Rouge, La. 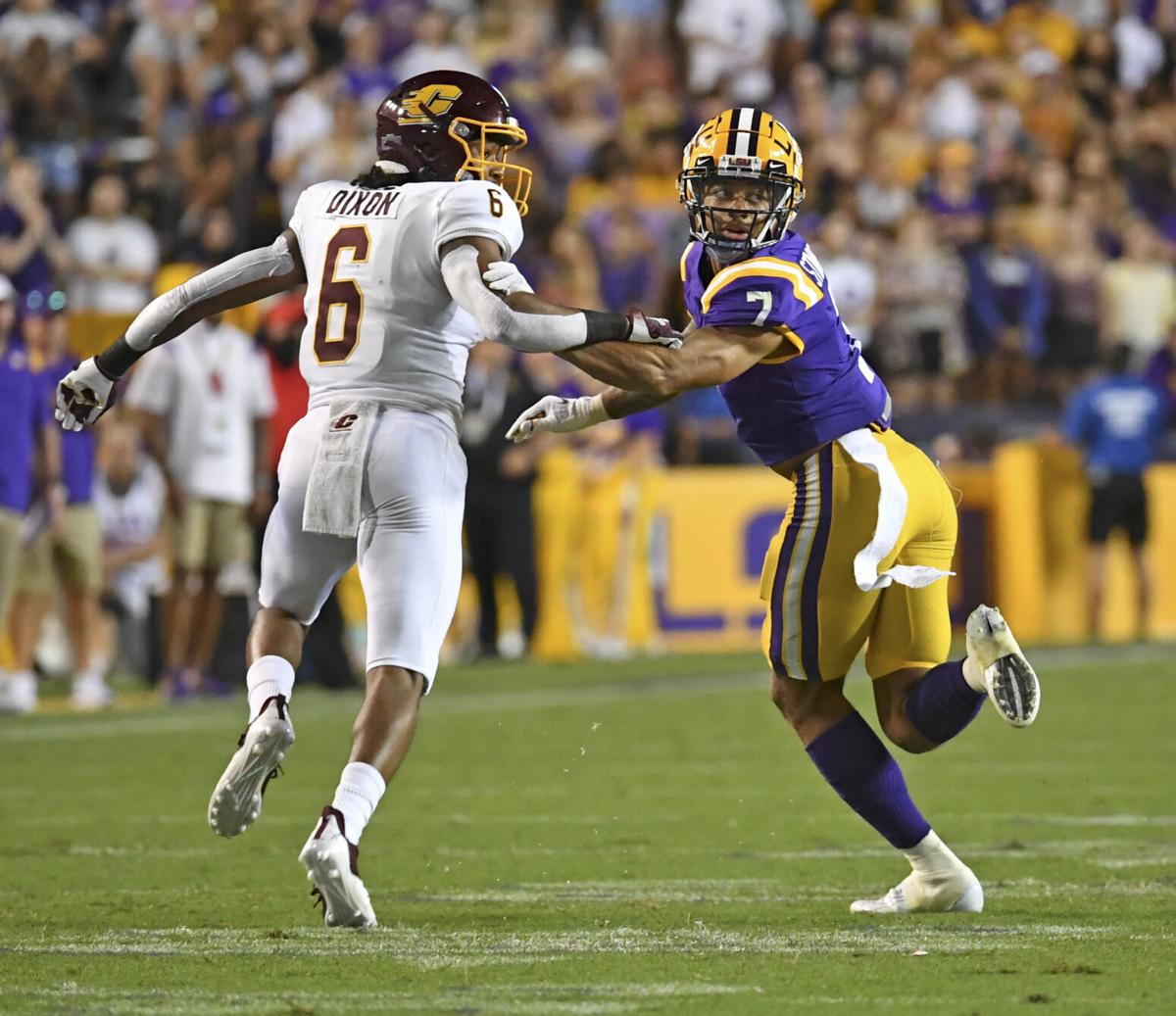 LSU cornerback Derek Stingley Jr. (7) pushes back on Central Michigan wide receiver Dallas Dixon (6) in the first half, Saturday, September 18, 2021, at Tiger Stadium on the campus of LSU in Baton Rouge, La.

LSU defensive back Major Burns (28) intercepts the pass in front of Central Michigan wide receiver Dallas Dixon (6) as LSU cornerback Eli Ricks (1) comes in to help during the first half at Tiger Stadium on Saturday Sept. 18, 2021, in Baton Rouge, La.

LSU cornerback Derek Stingley Jr. (7) pushes back on Central Michigan wide receiver Dallas Dixon (6) in the first half, Saturday, September 18, 2021, at Tiger Stadium on the campus of LSU in Baton Rouge, La.

Almost a year has passed, and BJ Ojulari still thinks about the loss. He was a freshman beginning to crack the rotation at the time, and in his first college game, LSU allowed 623 passing yards — a Southeastern Conference record — in its season opener against Mississippi State.

The game exposed defensive flaws that lingered throughout the 2020 season. As opposing teams peppered them with crossing routes, the Tigers struggled to communicate, leading to missed assignments and coverage busts. They finished with the worst pass defense in the FBS.

So as LSU prepares for Mississippi State again, Ojulari has pondered what went wrong a year ago and what his team must do to prevent a similar outcome this weekend.

“I definitely think about it, think about last year,” said Ojulari, now a sophomore defensive end who leads the country in sacks. “We're going to come out this week and focus on getting the win on Saturday.”

For the first time since Sept. 8, the weather cooperated on a day LSU planned to open part of practice.

The timing of LSU’s rematch with Mississippi State makes the game as much about whether or not the defense has improved as anything else. The Tigers struggled with similar concepts three weeks ago against UCLA, and though they played better against two overmatched opponents, they haven’t proved the issues that plagued them last season have been fixed enough to compete in the SEC.

LSU had a defense so thin at cornerback Jay Ward had to play two weeks after undergoing surgery on a torn meniscus. Pelini implemented man coverage throughout the game and never adjusted. The defensive backs couldn’t keep up with Mississippi State’s wide receivers. Players missed wheel routes. Cornerbacks lost at the line of scrimmage.

“It was embarrassing,” coach Ed Orgeron said. “I was embarrassed as a coach, and I take full responsibility.”

Orgeron changed coordinators during the offseason, hiring Daronte Jones along with two other defensive coaches. He wanted a simplified version of the 4-3 scheme that let LSU’s players attack. He hoped for no more missed assignments and busts. Jones, a first-time coordinator, focused on improving communication.

But in its first game, LSU’s defense struggled against UCLA. Ward, now a safety, left the game after the Bruins punted on three straight possessions, and UCLA scored its first touchdown on a crossing route. It later scored on another crossing route.

LSU beat its next two opponents with a stifling pass rush, but last weekend, Central Michigan scored its first touchdown on a busted coverage.

LSU used zone on the play. As running back Marion Lukes leaked into the flat, Stingley moved up to cover him. Sophomore Major Burns, the safety on that side, rolled to the middle of the field. His head pointed toward the tight end running down the seam, even though safety Cam Lewis was in the area.

Rabalais: A year after a stunning upset, Miss. State to set tone for LSU's season again

Nearly one year ago, the skies turned ashen for LSU. Mississippi State rode into Tiger Stadium on Sept. 26 wielding the sword of self-styled p…

“We just had a communication problem,” Stingley said, “but it’s going to be fixed.”

Statistically, LSU’s defense has played better than it did last season. Through three games, the group has allowed an average of 193 passing yards per game. The last two opponents scored a combined three offensive touchdowns.

But McNeese State and Central Michigan won’t pose the same challenge as another SEC team.

Mississippi State’s offense operates the same way in Leach’s second year. The Bulldogs run crossing routes, wheel routes and pick routes. They average 361 passing yards per game, the seventh-most in the country. They have rushed for a total of 136 yards through three games. So Leach will try to attack LSU’s secondary.

“They’re very fundamental,” Leach said. “They like the combination of man and various shell zones. They’re a four-man front. They don’t mess with three-man front a lot. Very basic. Very basic and committed to what they do. Sometimes those type of defenses are the most dangerous.”

Orgeron said LSU’s coaches have looked at Mississippi State film since the loss last season. They don’t want to see wide receivers running uncovered once again, so Orgeron said LSU’s players will need to know the down and distance, communicate and understand their assignments on every play.

Stingley and sophomore Eli Ricks have developed into one of the best cornerback tandems in the country. Ward should return after a two-game absence. The personnel seems more equipped to defend the Air Raid, but Orgeron knows LSU didn’t play well against UCLA. He emphasized LSU has to improve.

Ed Orgeron: LSU football has improved, but Tigers must get better in these areas

After LSU played its most complete game so far this season, coach Ed Orgeron thought the team showed improvement, but he said, “We're not there yet.”