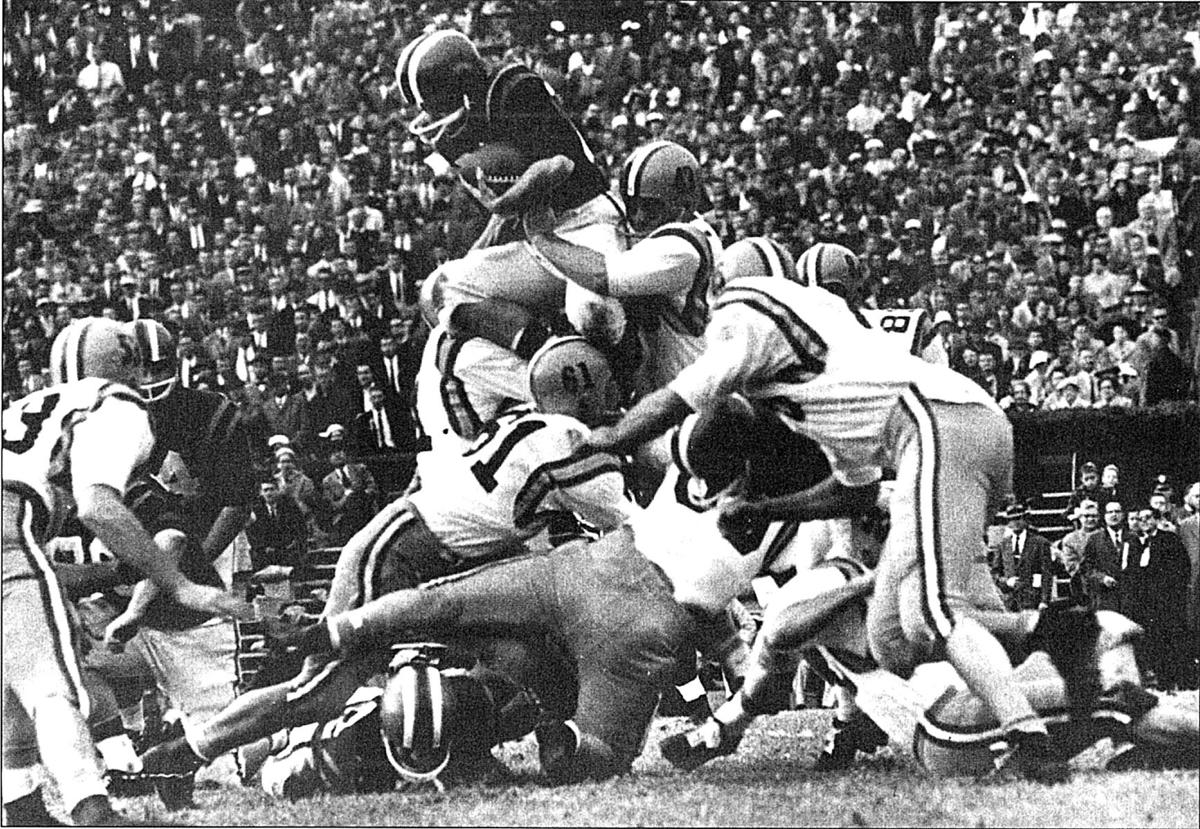 LSU's Chinese Bandits pull down a Clemson running back during the Sugar Bowl on Jan. 1, 1959. Seven of the 11 LSU defenders either have hold of him or are about to tackle him. 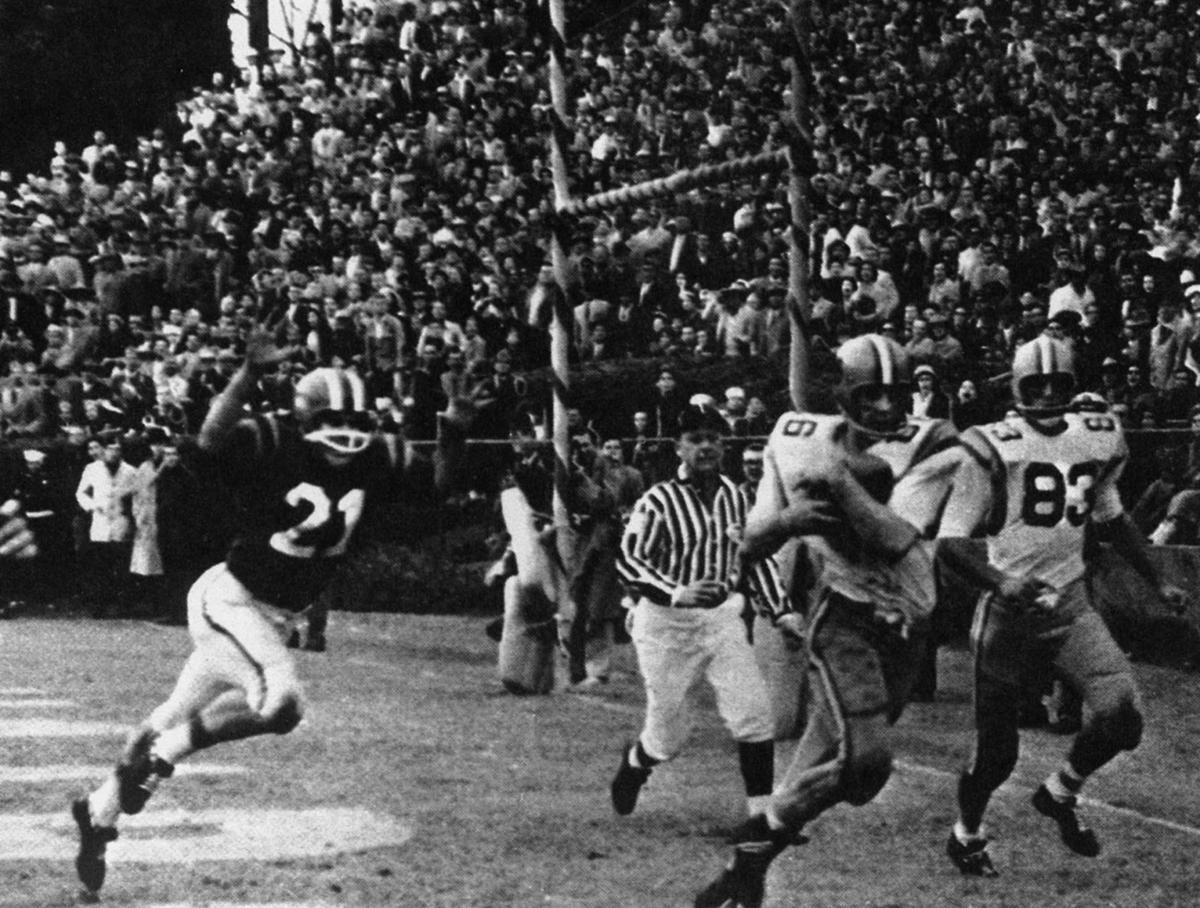 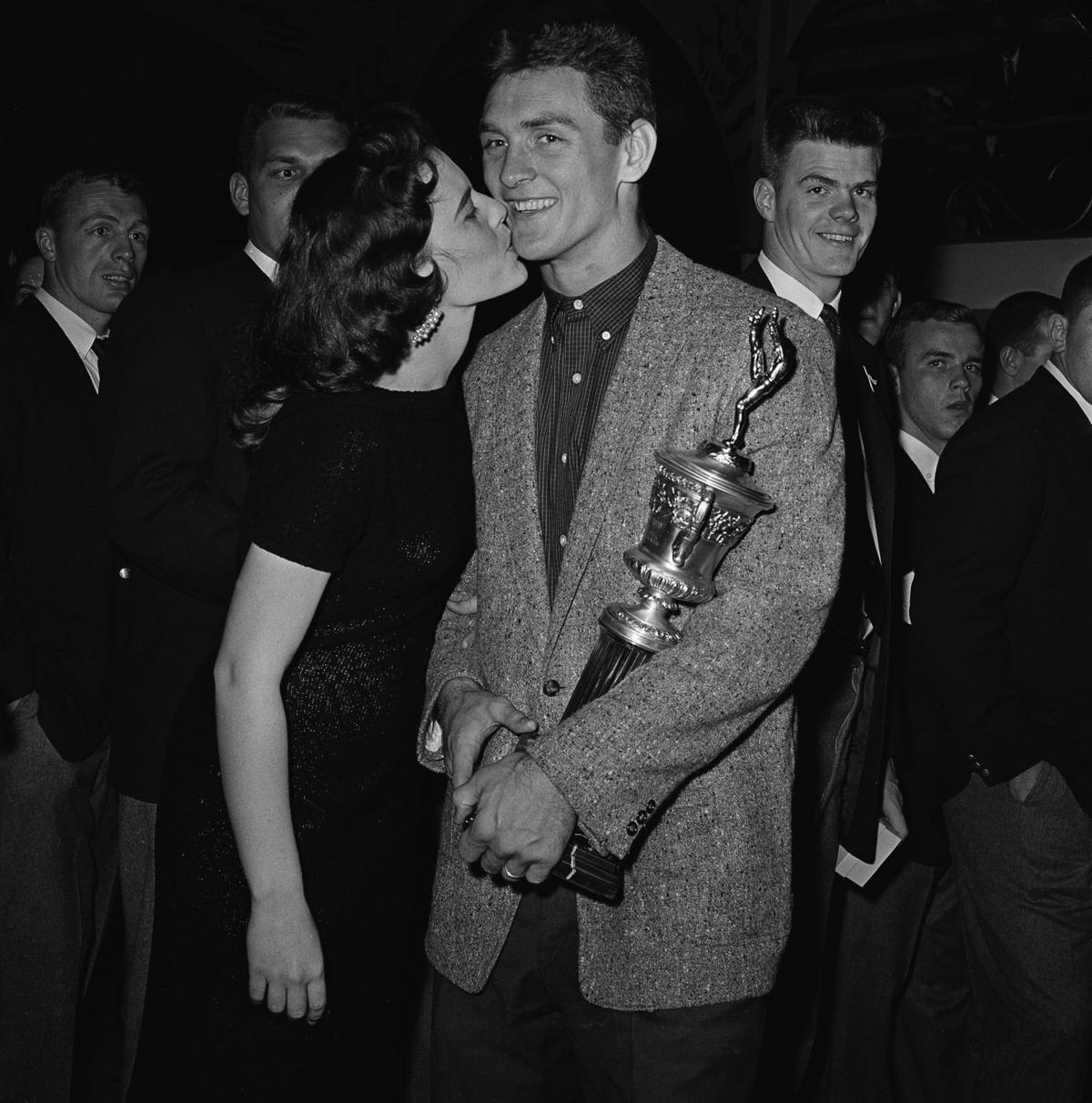 Billy Cannon gets a kiss from an unidentified young lady at the Sugar Bowl player's party on Jan. 2, 1959 in New Orleans. Cannon won the Miller-Digby Award as the game's MVP.

LSU's Chinese Bandits pull down a Clemson running back during the Sugar Bowl on Jan. 1, 1959. Seven of the 11 LSU defenders either have hold of him or are about to tackle him.

Billy Cannon gets a kiss from an unidentified young lady at the Sugar Bowl player's party on Jan. 2, 1959 in New Orleans. Cannon won the Miller-Digby Award as the game's MVP.

That was essentially the only thing at stake for LSU when it faced Clemson for the first time on New Year’s Day 1959 in the Sugar Bowl.

The 1958 national championship already had been won more than a month before when LSU completed a perfect 10-0 regular season with an overwhelming 62-0 rout of Tulane in its stadium before a then-Southeastern Conference record crowd of 83,221.

Back then, The Associated Press media poll and United Press International coaches’ poll closed before the bowls. In fact, LSU coach Paul Dietzel accepted the AP national championship trophy the night before the game at a banquet at Antoine’s. His team was back sequestered on LSU’s campus and would bus down to New Orleans the next day for the game.

But the pressure to finish with LSU’s first unbeaten, untied record since 1908 was palpable as the Tigers prepared to take on Clemson. Those Tigers won the Atlantic Coast Conference that year and came into the Sugar Bowl 8-2 overall and ranked No. 12 in the final poll.

Clemson was without question the looser team. LSU had become noteworthy that season because of Billy Cannon — he finished third in that year’s Heisman Trophy voting behind Army running back Pete Dawkins and Iowa quarterback Randy Duncan — and its three-platoon system that featured the defensive specialists known as the Chinese Bandits. But wisecracking Clemson coach Frank Howard enjoyed taking his shots.

“My boys play like a bunch of one-armed bandits,” Howard said before the game.

So much was different about football then. Defense dominated, while offense was practically an afterthought. Cannon led LSU with 686 yards rushing and nine touchdowns. Warren Rabb, LSU’s primary quarterback, completed 45 of 90 passes in 10 games for 505 yards and seven touchdowns, the same number Joe Burrow threw in the first half of LSU’s Peach Bowl victory over Oklahoma. Clemson quarterback Harvey White completed just 43 of 87 passes for 492 yards and one score all season.

The best players played both offense and defense then. Under the substitution rules of the day, a player could enter the game only at the start of a quarter and once more during the quarter. For that reason, Dietzel created the White Team, his best 11 players, trained to play offense and defense. The Go Team (it was Gold before a sportswriter misunderstood and shortened it during the season) primarily played offense, while the Chinese Bandits specialized on defense.

It was with this system that LSU was able to wear down teams during the 1958 season, but it was a system that was put to the test in the Sugar Bowl.

LSU thought it had a second-quarter lead when Red Brodnax smashed across the goal line, but he was ruled to have fumbled into the end zone with Clemson recovering for a touchback to keep the game scoreless at halftime. But the home state Tigers finally got the break they needed in the third quarter.

Punting deep in its end, Clemson’s deep snapper caught some blades of grass and bounced the ball back to his kicker, with Duane Leopard pouncing on it at the Clemson 11. Two plays netted 2 yards, and on third-and-8 Cannon took a handoff from Matherne, rolled right and threw a halfback pass in the end zone to Mickey Mangham.

Cannon would call it “a pass the Lord threw.”

“I threw it and prayed,” he said. “I was looking for (Johnny) Robinson, but they had him covered. Then I spied Mickey and let it go.”

The Bandits thwarted a late Clemson drive that died at the LSU 24 to preserve the 7-0 win. The Tigers emerged with their perfect season intact, winning their first Sugar Bowl after losses in 1936, 1937, 1938 and 1950.

Many of the participants in that Sugar Bowl are gone now. Cannon died in 2018, Dietzel in 2013, Howard in 1996. Tulane Stadium, which hosted the first 40 Sugar Bowls and sat astride the long, thin Tulane campus just north of where Willow Street bisects it, was demolished in 1980.

This time it really counts.