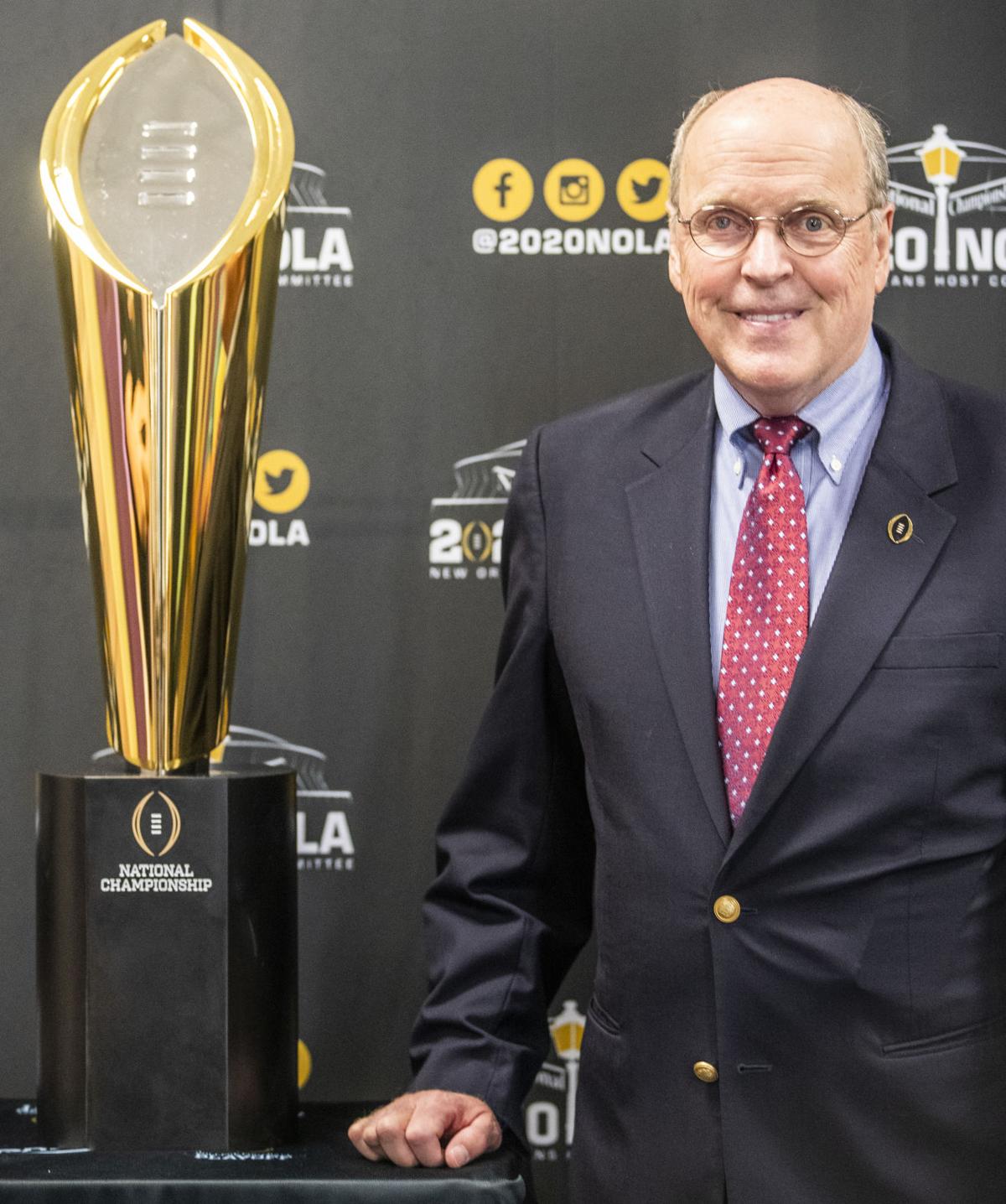 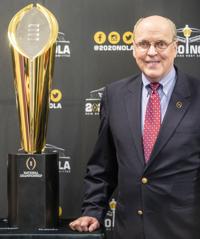 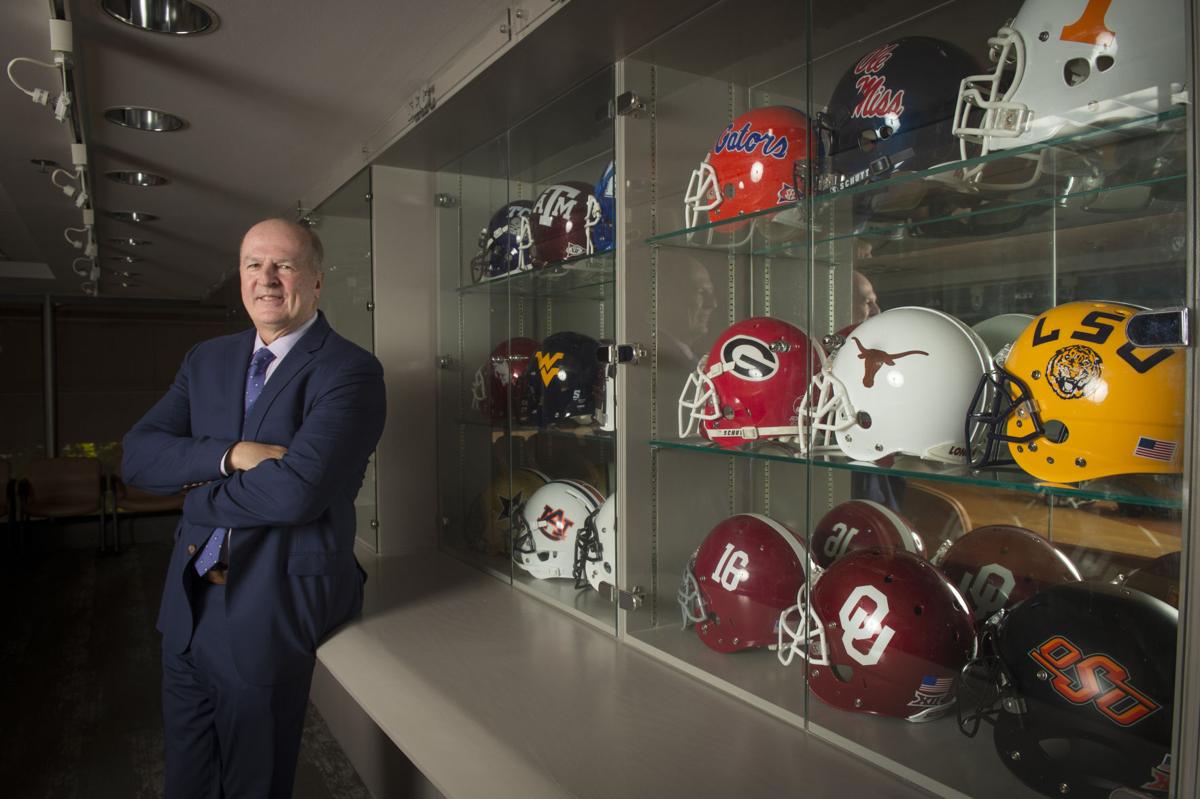 Sugar Bowl executive director Jeff Hundley in a meeting room at his New Orleans office in the Mercedes-Benz Superdome on Monday, July 1, 2019.

Sugar Bowl executive director Jeff Hundley in a meeting room at his New Orleans office in the Mercedes-Benz Superdome on Monday, July 1, 2019.

All over the country, college football fans, coaches, players, athletic directors and conference commissioners are anxiously counting down the days. They’re taking a grim look at the coronavirus statistics and are trying to figure out whether there will be a 2020 season, and if so, what that will look like.

“The uncertainty, if you let it bother you, will keep you awake at night,” said Bill Hancock, executive director of the College Football Playoff.

People like Hancock and Allstate Sugar Bowl CEO Jeff Hundley have an added layer of anxiety to contend with, something lost in glare of spotlights as day after day peels off the calendar and the planned start date of the regular season begins to creep over the horizon.

While the CFP and its New Year’s Day semifinals, the Sugar and Rose bowls, followed by the National Championship game set for Jan. 11 in Miami, are still months more down the road, the questions about whether they can be pulled off as scheduled loom just as large.

Hundley said this year’s Sugar Bowl president, Ralph Capitelli, has an apt term for it:

First there was the big, depressing drop in March as the spring sports calendar was either wiped clean or frozen in place. Then came the encouraging lift a couple of months back as the fruits of so many painful closures and tough measures started doing the trick to stamp down the virus.

'How can we recover that?' $15.5M at stake if Louisiana schools don't play nonconference games

[Editor's note: This story been updated to reflect an updated figure regarding LSU's contracts]

Now the numbers have spiked up again in lots of unnerving places, including the areas supposed to host the CFP games: South Louisiana, Southern California and South Florida.

It doesn’t look encouraging on the face of it, but Hancock, one of the more noted optimists you will find anywhere in the sports world, has steadfastly kept his glass on the high side of half full.

“The fact is nobody knows,” Hancock said. “The circumstances can change tomorrow or next week.

But there also have to be plans to be flexible, at least allowing for the possibility that, among the many scenarios out there, the college football season could be delayed in starting. If delayed long enough, it will have a cascading affect on the bowl season and the playoffs.

For the Sugar Bowl, there is an added wrinkle. The Mercedes-Benz Superdome is in the opening stages of a massive $450 million renovation project, a project that has already had to be worked around the Sugar Bowl’s scheduled date and the Saints’ regular season and potential postseason home games.

“We can be flexible with the date,” Hundley said, “within certain parameters. We’re good through January, other than possible dates for the Saints’ playoff games. Beyond that, we could run into some issues with the Superdome renovations.

“We’re staying in touch with the Saints and what they’re trying to do.”

No one wants to give that up, including the CFP and ESPN, knowing full well the Jan. 1 semifinals are a TV ratings bonanza. According to SportsMediaWatch.com, in the first six years of the CFP, the Jan. 1 semifinals have had the highest ratings, topped by the Alabama-Oklahoma Sugar Bowl in 2015 (15.2).

But some flexibility could be mandated. The Sugar Bowl folks know all about that, having had to move the 2006 game between Georgia and West Virginia to Atlanta after Hurricane Katrina tore the Superdome to shreds.

“I was here for Katrina,” Hundley said. “As much as anything, we learned a lot can be accomplished in a short amount of time with our many partners. We think that can be the case again.

“The Sugar Bowl committee is a very tradition-oriented group, but we know tradition can take a back seat if needed.”

The entire college bowl season is still at loose ends, waiting for the regular season to be sorted out before dates for bowl games are announced. With any luck, those dates will be coming in the next couple of weeks.

“I wish I could tell you more, but we’re just waiting for whatever comes,” Hancock said. “College football is so fascinating because it’s a world of control and planning, knowing what you’re going to have for lunch on Tuesday two weeks from now. We’re getting to know ourselves and learning that we can adapt.

“We don’t have any choice.”

That may be the only certainty of this whole situation.

Southeastern Conference joins others in moving to league-only football schedule

The Southeastern Conference announced Thursday it will play a 10-game, league-only schedule, joining the majority of the other major college f…