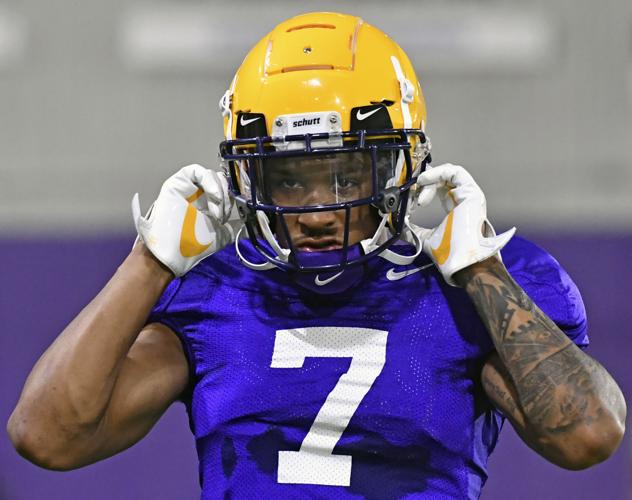 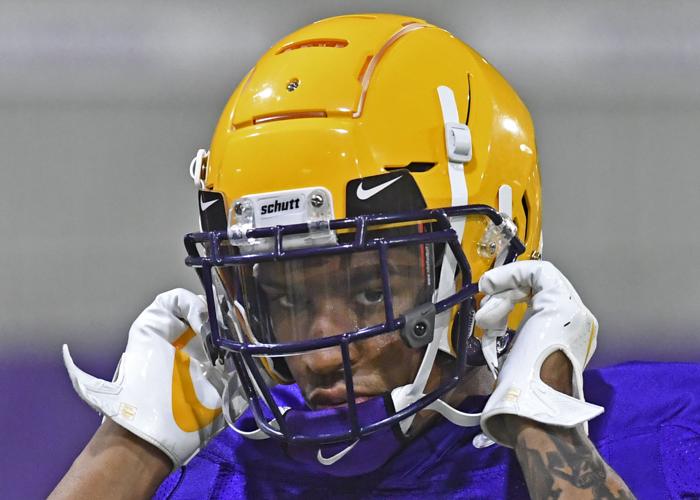 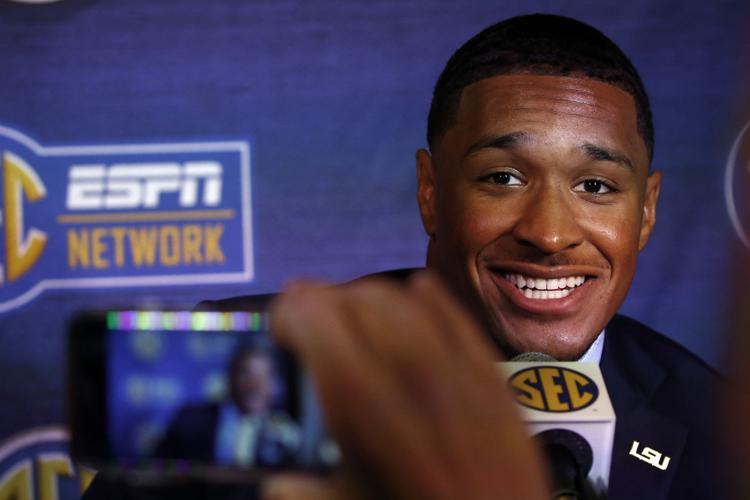 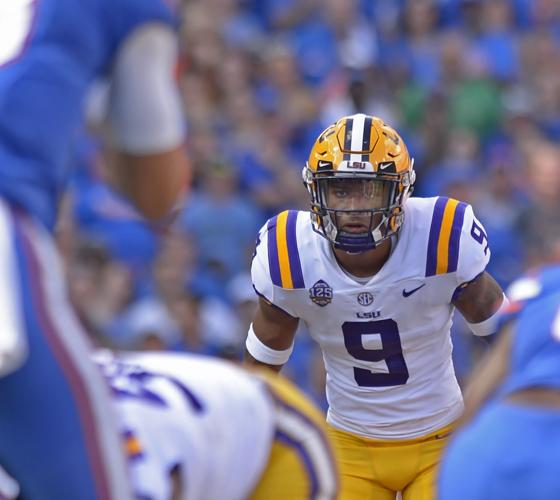 When he decorated his dorm room at IMG Academy, Grant Delpit grabbed a purple jersey. Yellow and white stripes curved over its shoulders. A No. 7 filled its back underneath the name “Mathieu.”

Delpit held the uniform and a few push pins. He had transferred to IMG, a boarding school in Bradenton, Florida, for his senior year of high school, joining a football team that modeled itself after college programs.

Born in New Orleans and a lifelong LSU fan, Delpit wanted to play for the Tigers. He dreamed of wearing No. 7 when he watched cornerback Patrick Peterson return kicks. He molded his game off defensive back Tyrann Mathieu, a Heisman Trophy finalist who wore the number after Peterson.

Delpit tacked the jersey above his bed. It hung over him throughout the season.

“If that's the last thing you see when you close your eyes at the toughest high school program in the country,” said Delpit’s mother, Endya, “you've set a lofty goal for yourself.”

Two years later, Delpit became the ninth unanimous All-American in LSU history. When linebacker Devin White left for the NFL, Delpit became the face of the Tigers' defense, a nationally recognized safety predicted to go early in the first round of next year’s draft.

In March, LSU gave Delpit the No. 7 jersey, solidifying his status as the team’s best player. Former running back Leonard Fournette congratulated Delpit. So did Mathieu.

Delpit’s sophomore year transformed his life as his production on the field increased his fame off it. He took pictures with babies, children and adults. Strangers wanted to share a moment, and Delpit obliged.

When Delpit attended the Bronko Nagurski Trophy ceremony as a finalist last December, fans waited for his autograph. Delpit signed everything. After a while, Endya tried to pull her son from the crowd.

Delpit consumed LSU football as a child. He argued with his best friend in pre-kindergarten about Alabama. He memorized players’ statistics, and he owned a child’s version of an LSU uniform.

In August 2005, when Delpit was 6 years old, his family left New Orleans before Hurricane Katrina. Water flooded their home, destroying almost everything in it. With nothing left there, the family settled in Houston. They arrived at the beginning of football season.

Delpit had started youth league football tryouts in Louisiana before the storm. He watched his cousin play for a local team in Houston. Delpit joined. He loved everything about the sport, and he clung to his LSU fandom, even from the neighboring state.

Recruiting increased by Delpit’s junior year at Lamar High School. Les Miles sent him a video on Delpit's birthday. In it, Miles showed a wall recognizing unanimous All-Americans at LSU.

Delpit committed to LSU before he transferred to IMG. A four-star prospect, major schools across the country tried to pull Delpit from his commitment. Endya waited for her son’s heart to change. It never did.

“No matter what school he visited or where he went,” Endya said, “it was always coming back to LSU.”

Delpit started his first game. He finished his freshman season with 60 tackles, one interception and nine pass breakups, showing a blend of speed and instincts. He gained recognition, but a broken collarbone last spring stunted some of the hype. As he entered his sophomore year, he was not yet a household name.

Over the course of the season, Delpit made himself one of the best players in the college football. He stopped a fake field goal in a win over No. 2 Georgia. He led the Southeastern Conference with five interceptions. He made 74 tackles, and he recorded a team-high five sacks. Teammates raved about his versatility.

Attention rose throughout Delpit’s sophomore season. He gained followers on social media. Coaches expected him to make more plays at practice. People recognized him on the street.

This spring, Delpit’s grandmother, Leila Eames, attended a Mardi Gras celebration in Washington. The delegates from New Orleans hosted it every year. One night, she went to a party thrown by LSU alumni.

“Somebody in there made it known I was Grant's grandmother,” Eames said. “Well, my God.”

Partygoers overwhelmed Eames with questions about Delpit. And some people asked to take a picture with her — just for being his grandmother.

Delpit embraced the pressure that came with his new status, but he had to adjust to people invading his privacy. He prayed. He talked with his family. Teammates said he handled attention well, remaining grounded in the midst of rising fame.

“He’s the same in the locker room, not too big for anybody,” outside linebacker K’Lavon Chaisson said. “When you’re at that level, but you remain humble, you remain a regular guy who’s above no one, who stands in line, waits his turn, doesn’t really try and move anybody out of their position? That’s a special thing when we have something like that.”

Earlier this summer, after LSU picked him to attend SEC media days, Delpit met with Tommy Karam, a senior instructor in the school’s department of marketing. Karam has worked with LSU football players since the early 2000s.

Karam met Delpit three times, first in a group setting with center Lloyd Cushenberry and quarterback Joe Burrow — LSU’s other representatives at media days — then by himself.

Karam’s lessons centered on personal branding. He instructed the players on the basics of a good interview, one that represented LSU and themselves in a positive way. Karam stressed sportsmanship. He tested them with questions. They discussed likability and the way you make someone feel.

“I don't want them to change who they are,” Karam said, “but I want them to have an idea of what works in the public eye.”

Joe Burrow picks up the volleyball near his apartment's pool, and his friends can already sense where this is going.

When it comes to LSU football, O is for Orgeron.

It may have seemed a lot longer ago to many fans, but the LSU football team reached double-digit wins for the first time in four seasons when …

Anxious for the situation and the opportunity after receiving No. 7, Delpit focused on his preparation. Media days gave him a chance to show the country his personality. After answering hypothetical questions — Karam didn’t want to create scripted responses — Delpit often asked for Karam’s opinion.

“He (was) not being mechanical and robotic,” Karam said. “He really wanted to do well.”

After their final session together, Karam and Delpit stood in front of an enlarged Sports Illustrated cover from 1971 hanging near LSU’s athletic communications offices.

Tommy Casanova, a three-time All-American at LSU who later reached three Pro Bowls, smiled from the center of the poster. Buttons surrounding him said Notre Dame, Nebraska, Michigan and Southern California. The headline read: “Tommy Casanova of LSU Best Player in the Nation.”

“You see that guy in the middle?” Karam told Delpit. “I believe if you do it right and you have a good year and you present yourself well, you have the potential to be in that guy's place.”

Delpit stared at the poster. He looked at the school buttons and a man gazing back at him, a player who once filled the position he stands in now. He didn't speak.

Inside LSU’s renovated football operations building, a wall display recognizes the school’s All-Americans. It features every honoree with his name, position, picture and year.

When LSU’s players toured the facility for the first time last month, Delpit posed for a picture by his plaque. He pointed at it, smiling. Silver to signify his unanimous selection, Delpit’s square stood out from the rest of the wall. Endya saw the photo online and texted her son.

Three years into his LSU career, Delpit has reached his dreams. His family ordered No. 7 jerseys this summer. They embroidered them with names. Eames’ says “Grant's Grandmother” across the back.

Expectations for Delpit, who missed more than a week of preseason camp with an undisclosed injury, cannot be higher. ESPN ranked him the No. 4 player in college football, one year after not ranking him at all. Orgeron called him “the best defensive player in the country.” Delpit landed on preseason watch lists for the Bednarik Award and Bronko Nagurski Trophy, both given to the nation’s best defender, and the Jim Thorpe Award, presented to the best defensive back in the country.

When he arrived at LSU, Delpit received comparisons to the players who came before him. Adams. Mathieu. Peterson. Defensive backs at LSU have often begun in someone’s shadow, but Delpit has emerged, adding to the legacy of the position while creating his own brand. He wants to win a national championship.

“I'm trying to put my name in stone,” Delpit said. “Do everything I can so that people remember my name. So that people coming up, they want to be compared to Grant Delpit."

Before he left for LSU’s preseason camp earlier this month, Delpit FaceTimed his mother. He wore Mathieu’s jersey. The uniform hung on his wall his first two years at LSU. But before he wore the number himself, Delpit slid Mathieu’s name over his back, the jersey a reminder of where he started, what he has achieved and what he still wants to accomplish.

Can anyone stop a rematch of Georgia and Alabama in the SEC championship?

As college football approaches the beginning of the 2019 season, can anyone prevent Alabama and Georgia from playing again in the SEC championship?

Rabalais: College football is celebrating this season, and the party is headed for New Orleans

College football is throwing itself a big 150th birthday bash all season long.

With stronger defense, the Cajuns should be in the mix for another Sun Belt chase

A pair of LSU football players were named to ESPN's preseason All-America team, which was released Tuesday.