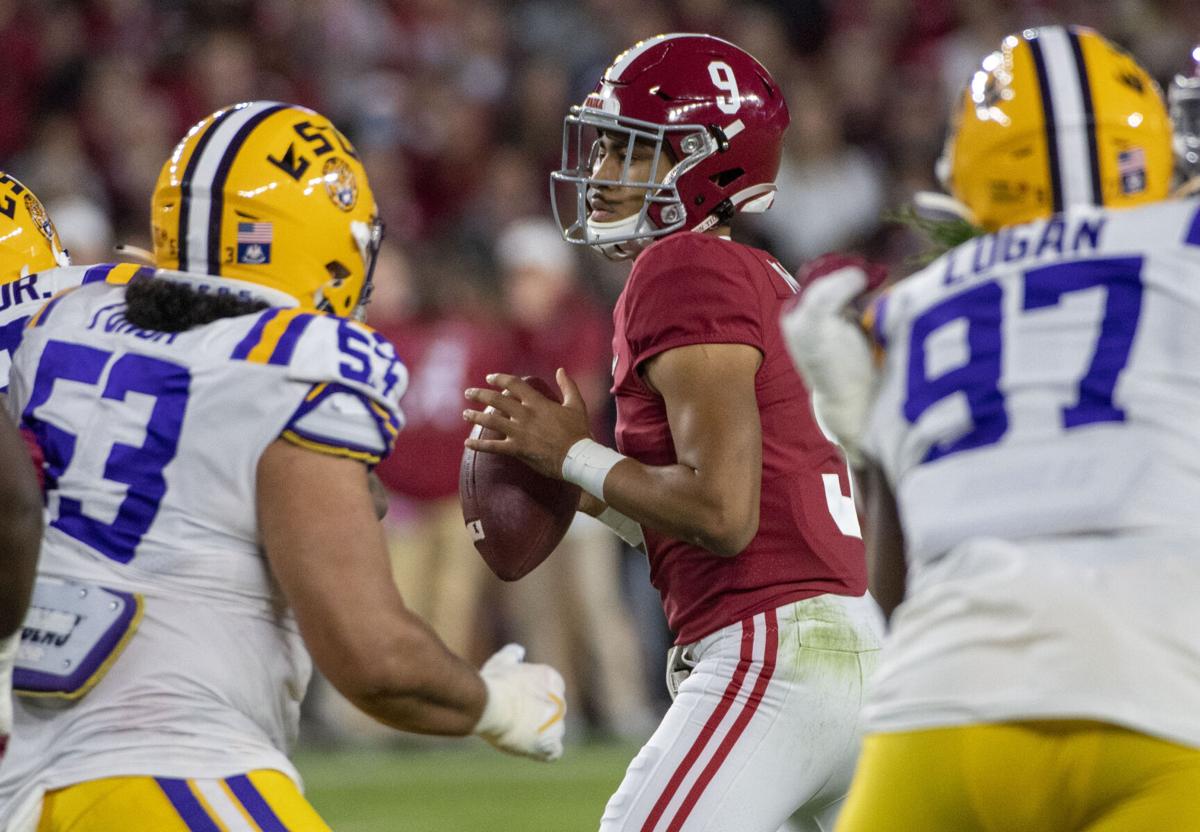 LSU linebacker Soni Fonua (53) and defensive tackle Glen Logan (97) close in on Alabama quarterback Bryce Young (9) during the first half at Bryant-Denny Stadium on Saturday Nov. 6, 2021, in Tuscaloosa, Ala. 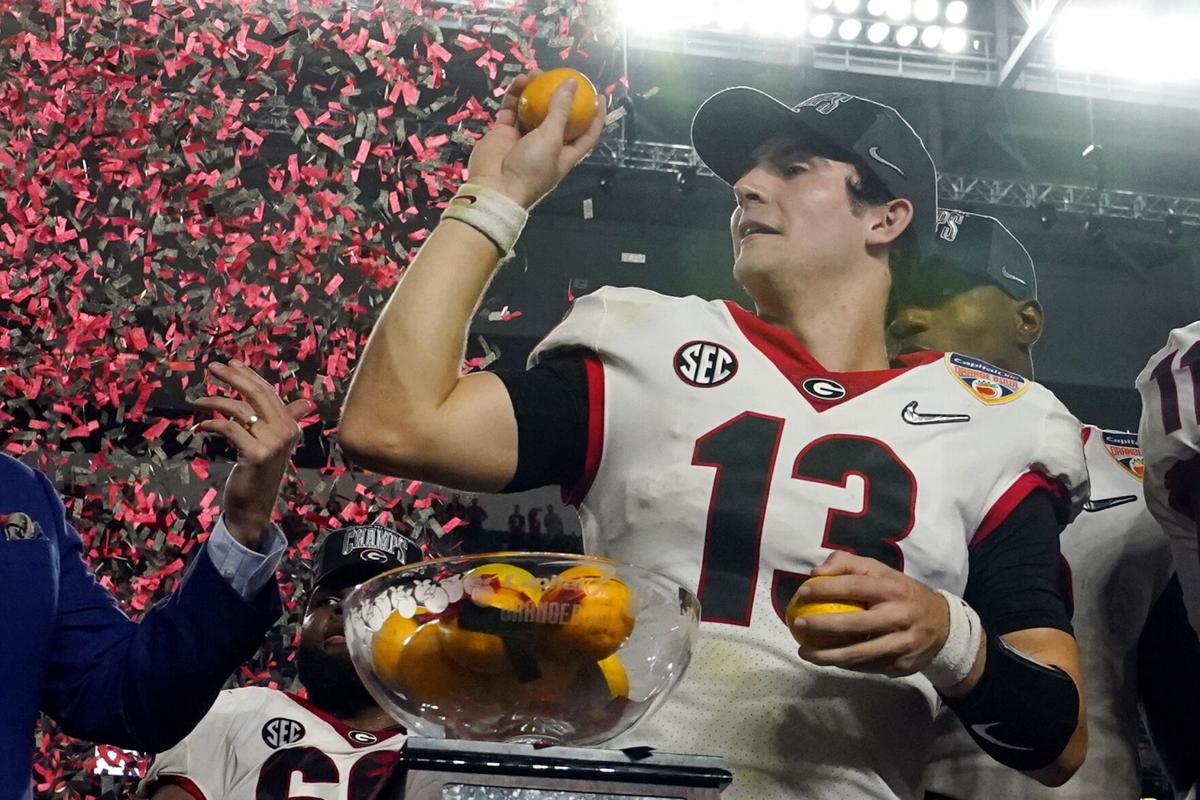 Georgia quarterback Stetson Bennett tosses oranges after their win against Michigan in the Orange Bowl on Dec. 31, 2021, in Miami Gardens, Fla. Georgia won 34-11.

LSU linebacker Soni Fonua (53) and defensive tackle Glen Logan (97) close in on Alabama quarterback Bryce Young (9) during the first half at Bryant-Denny Stadium on Saturday Nov. 6, 2021, in Tuscaloosa, Ala.

Georgia quarterback Stetson Bennett tosses oranges after their win against Michigan in the Orange Bowl on Dec. 31, 2021, in Miami Gardens, Fla. Georgia won 34-11.

INDIANAPOLIS — Place two snapshots of Alabama and Georgia’s regular seasons side by side and you’d come up with one incontrovertible conclusion:

The Bulldogs, not the Crimson Tide, were better.

Aside from an opening 10-3 defensive sausage grinder win over Clemson, Georgia bludgeoned every opponent by at least 17 points (Kentucky came closest in a 30-13 defeat). The Bulldogs scored 37 or more points eight times. They didn’t allow more than 30 points, not in a game, but in any one month of the regular season.

But Alabama? The Crimson Tide was gasping to the finish to hold off a Florida team that would go 6-7 by a 31-29 score. It lost 41-38 to Texas A&M, which still managed to go no better than 4-4 in the Southeastern Conference.

LSU taped up Alabama’s running game and shipped it overseas, holding the Tide to 6 net yards rushing in a 20-14 loss that had the outmanned Tigers throwing for the end zone on the final play. And Bama’s playoff hopes were flaming out until it rallied from down 10 in the fourth quarter to beat Auburn 24-22 in overtime in the Iron Bowl.

But then came the postseason and the Tide turned to stone. Georgia led 10-0 but Bama was just clearing its throat, roaring back for a 41-24 butt-kicking in the SEC championship game. The Tide then smothered Cincinnati 27-6 in the Cotton Bowl just to prove once again what is almost always the case:

When the games get the biggest, Bama is at its best.

“I think some of those close calls we had during the season just helped us,” Alabama running back Brian Robinson Jr. said. “We had to battle with teams all the way to the end of the game, so we know what we're comfortable with coming from behind or playing from behind, seven to 10 points. We just had to prepare to have to play full games and we'll get every team's best for the full game.”

Experience. Confidence. All that counts in Alabama’s favor and that’s easy to understand. But at virtually every position, in virtually every significant statistic, the Bulldogs are the Tide’s superior or equal or so close as to almost make no difference.

All except one: quarterback.

Bryce Young is Alabama’s latest five-star quarterback phenom, the kind of player Nick Saban seems to build out of recycled quarterback parts in his laboratory. Stetson Bennett is Georgia’s senior walk-on, the guy who has managed to hold former five-star JT Daniels at arm’s length.

It's gone more than well enough for Georgia and Bennett all season. Through their 12 regular season games and in a CFP semifinal romp over Michigan in the Orange Bowl, Bennett was superb, throwing for 313 yards and three touchdowns in Miami to shred the Wolverines’ vaunted defense 34-11.

But against Alabama, Bennett was … not. He threw for 340 yards and three touchdowns, yes. But that was playing catchup. He also threw two interceptions, one of them a pick six by safety Jordan Battle early in the fourth quarter of the SEC championship game that put Georgia on ice and Bama well on its way to the 41-24 victory.

Now it’s Bama versus Bennett again, and despite all his success all season, Bennett seems to know his entire Georgia career will be judged by what he does in these two championship games against the Tide.

“It's the nature of the beast,” Bennett said during Saturday’s CFP media day sessions. “You're the hero or the zero.”

Young, meanwhile, has displayed the skill and calm of a neurosurgeon this season, carving up defenses en route to the Heisman Trophy and yet another CFP final berth.

Give him all day to throw, as his offensive line did against Georgia in Round One, and you have no chance. Pressure him and force him to run, which really isn’t his preference, and his accuracy barely registers a blip.

“He's slippery,” said Jordan Davis, Georgia’s All-America defensive tackle. “We were watching, I think, ‘Hard Knocks’ with the Colts, and they were talking about the gingerbread man, how Kyler Murray was running around like a gingerbread man. That's what we've been calling him (Young) all week.

“Just seeing him run around our defense in the SEC championship game, you have to tighten up. That's one of the things we've been trying to do. I've been going against wide receivers in our quarterback rodeo drill in practice. It teaches you to track the hips. We've just been tracking hips all practice.”

If history is any guide in these national championship showdowns, it’s that the team with the most elite quarterback usually wins. Last year Alabama won with Mac Jones. The year before that, it was Joe Burrow and LSU over Clemson.

Someone asked Young, a sophomore, if he remembered his first scholarship offer.

“It was the last day of eighth grade. I went out to Texas Tech, I had been in contact with them. It was from coach Kliff Kingsbury. He was the first coach to give me a scholarship offer. I was super excited.”

That was six years ago. Four years ago, when Alabama beat Georgia for the national title, Stetson Bennett was a redshirt freshman playing quarterback on the scout team.

Who will be the zero or hero? Bennett is surrounded by the better team, but it’s hard to bet against the gingerbread man.