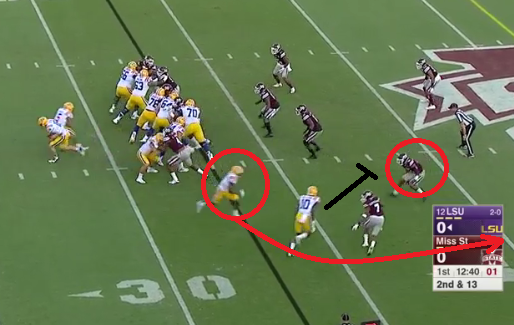 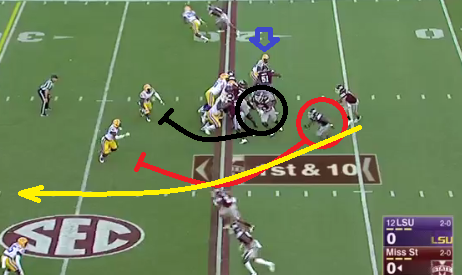 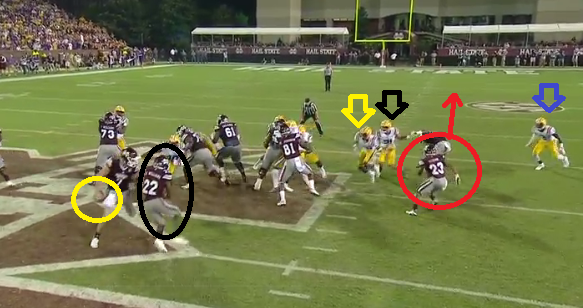 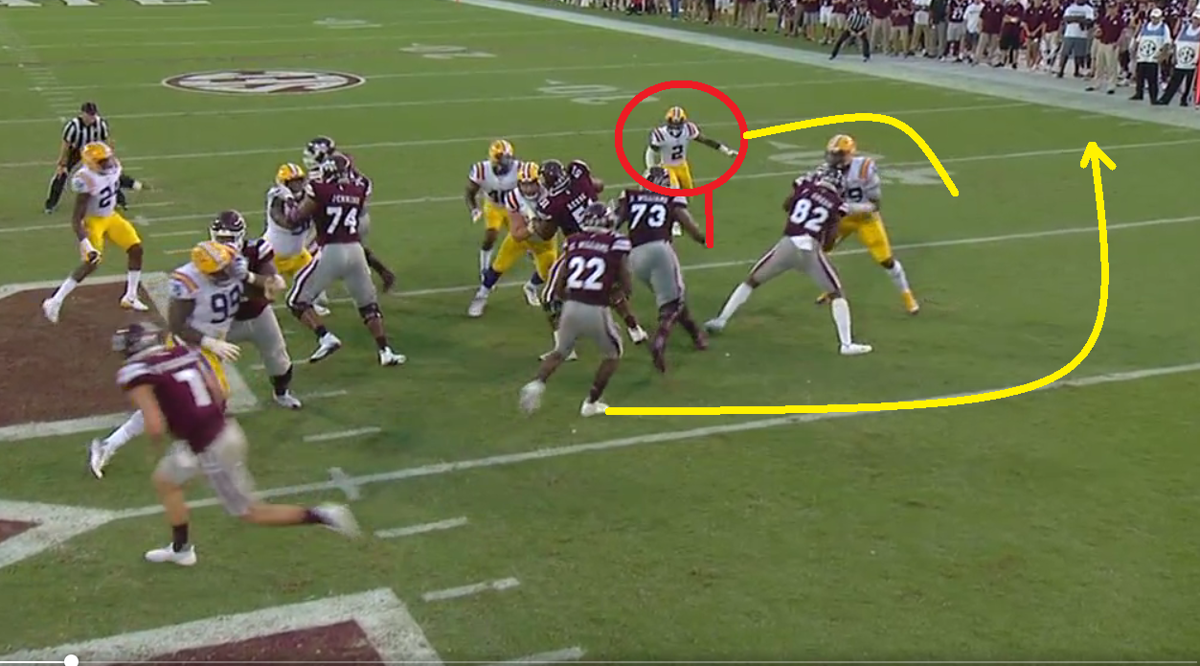 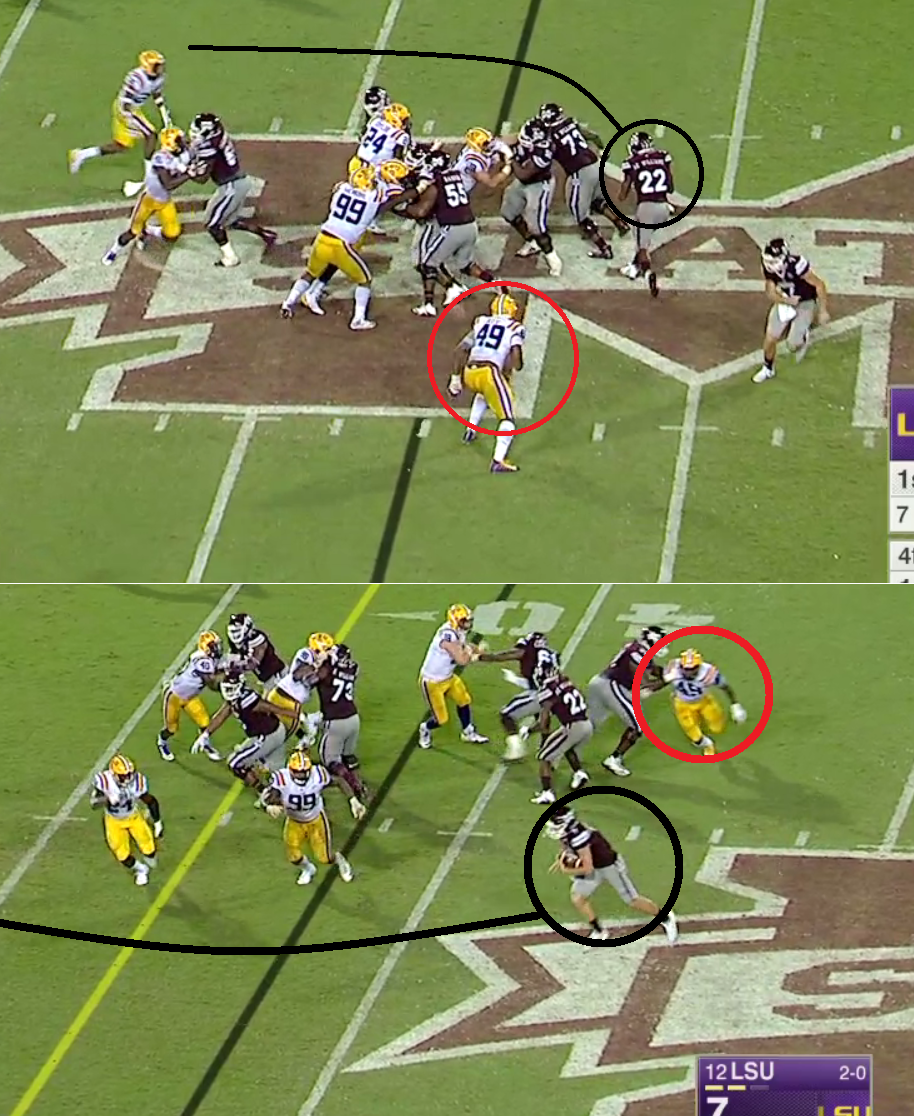 LSU moved Arden Key around, but that didn't help, something made clear on back-to-back plays in the third quarter (screen shots are to the right). On the first, Key aligned on the left side (red), only to have QB Nick Fitzgerald hand off to RB Aeris Williams (black) on a run to the right. On the next, Key (red) aligned on the right side, only to have Fitzgerald (black), on the same play, keep the ball for a run left. 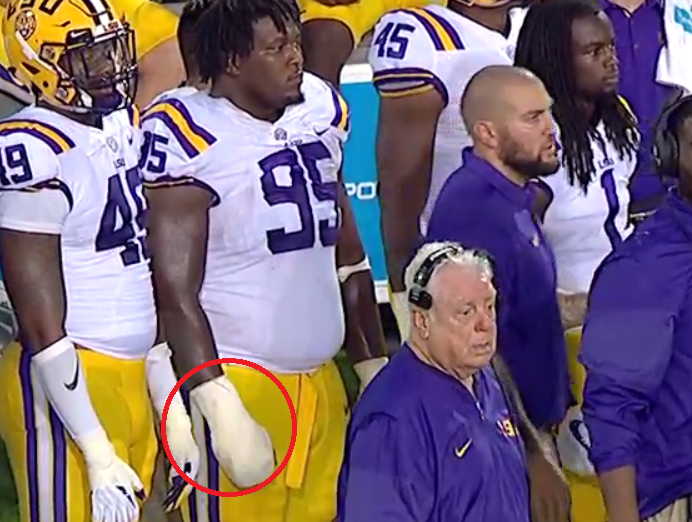 Rub route: On second-and-13 on the opening series, LSU QB Danny Etling hits DJ Chark for a 67-yard touchdown pass, but the play is negated by offensive pass interference.

'People are going to throw stones at you': Beaten and battered, QB Danny Etling and LSU leaders says it's time to rally

'They got outside': Mississippi State's first offensive play from scrimmage was a sign of things to come. QB Nick Fitzgerald ripped off a 16-yard run to the outside.

Play-action bust: On third-and-1 in the second quarter, State QB Nick Fitzgerald finds a wide open WR Keith Mixon for a 45-yard touchdown pass to all but secure the win.

Next man up? LSU's depth on the defensive line a looming issue moving forward

LSU players repeat the mantra: Next man up.

Rabalais: Only embarrassment for LSU in Starkville; can they come back with answers?

Penalties by phase of game

Rushing outside of tackles

Rushing inside of tackles

All photos courtesy of ESPN.

LSU coach Ed Orgeron met with the media at 12:30 p.m. Monday to preview the Tigers' Saturday night game against Syracuse and look back at the …

Under the lights: LSU, Troy game set for night kickoff in Tiger Stadium

Make it five for five.

Rabalais: Will LSU be able to kick its penalty problem? We'll find out Saturday night

BYU and Chattanooga weren’t good enough to expose the cracks in the facade of LSU football, but Mississippi State certainly was. The Bulldogs …

'He was furious': Players explain LSU's struggles in worst performance under Aranda

This is a weekly tradition for Will Clapp and KJ Malone.