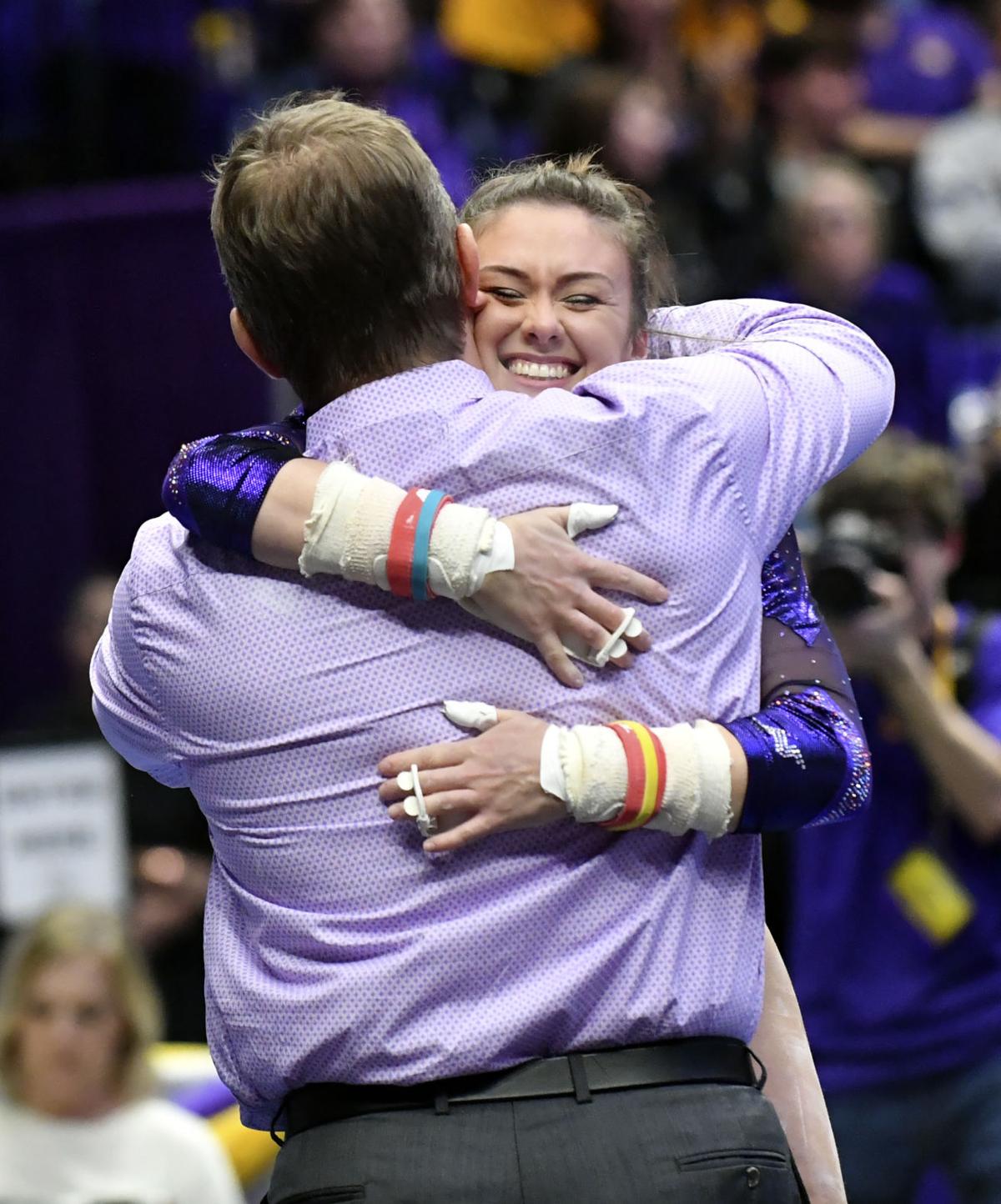 LSU senior Ruby Harrold celebrates with co-head coach Jay Clark after sticking the landing on the uneven bars in the Tigers' season opener against Arizona, Friday, January 3, 2020, at the Pete Maravich Assembly Center in Baton Rouge. Harrold scored a 9.875 in the event. 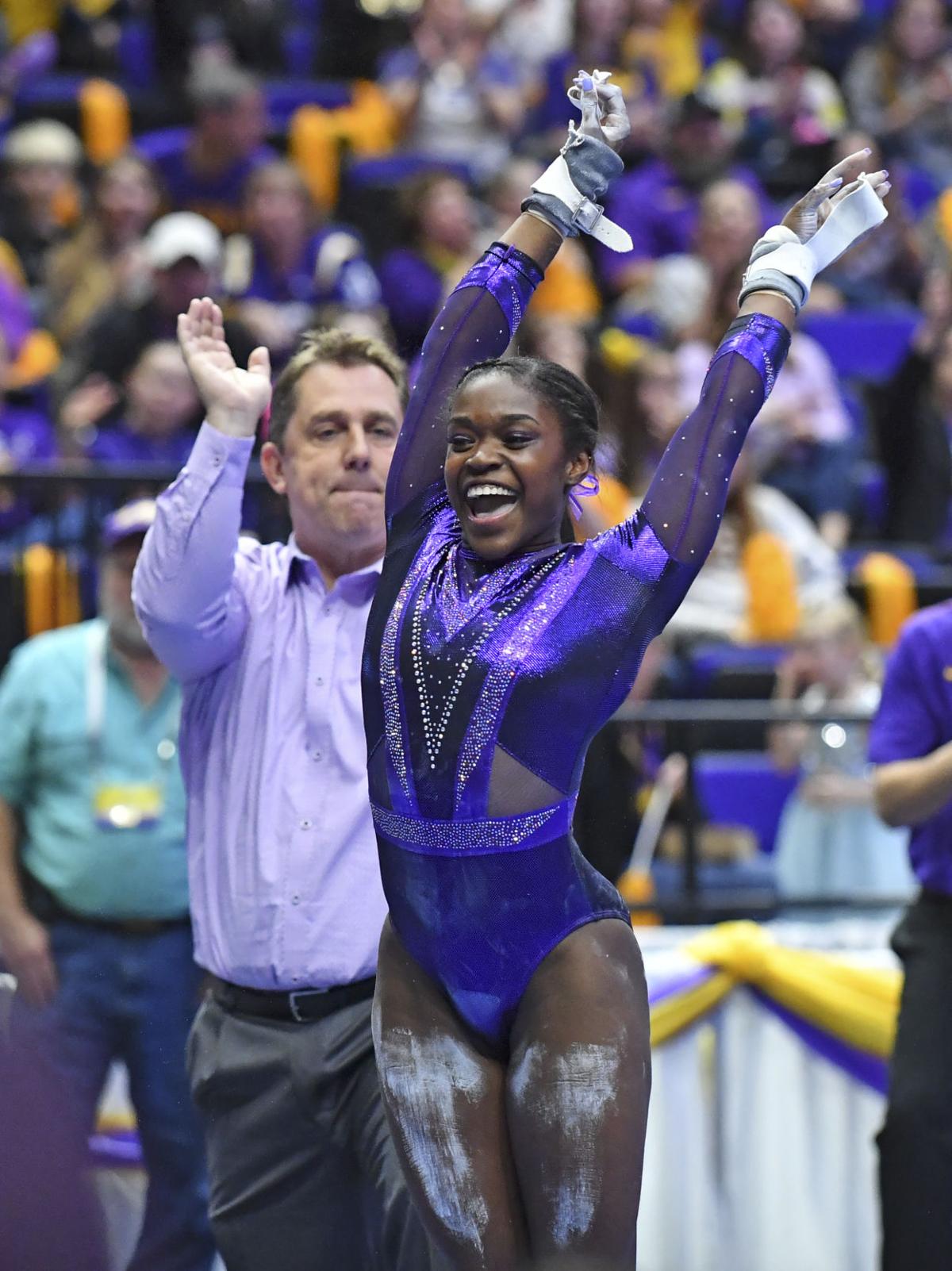 LSU senior Ruby Harrold celebrates with co-head coach Jay Clark after sticking the landing on the uneven bars in the Tigers' season opener against Arizona, Friday, January 3, 2020, at the Pete Maravich Assembly Center in Baton Rouge. Harrold scored a 9.875 in the event.

There was no confusing the LSU football team’s high-flying offense with the score turned in by LSU’s gymnastics team Friday night.

Despite the middling score by LSU’s loft standards, co-head coach Jay Clark said he’s hardly discouraged given how many freshman routines the Tigers had to depend on (eight of 24) and the earliness of the meet.

“The sky is not falling,” Clark said Monday.

“The first meet was a little rough. There’s no getting around that. But it wasn’t a big surprise to me given the dependence on freshmen and the fact it was Jan. 3, which is earlier than we typically like to go.”

According to RoadToNationals.com, only 25 teams posted scores from the first weekend, and LSU’s score didn’t fare badly by comparison. The Tigers, who were ranked No. 2 in a preseason poll coming off their third NCAA runner-up finish in the past four years, posted the nation’s seventh-best team score.

“This team is fully capable of doing everything the last five or six have done and then some,” Clark said. “We have a great deal of talent on this team, and I’m very, very confident in their ability to do what needs to be done.”

LSU opens its seven-meet Southeastern Conference schedule Friday when it travels to Athens to take on Georgia. First event is set for 6:30 p.m. CST and will be shown on the SEC Network.

The Tigers beat the Bulldogs in Baton Rouge last season 197.900-196.325. Georgia posted a 195.100 in its opener Friday to win the four-team Critique Classic Invitational in Kissimmee, Florida, over Iowa, Oregon State and Bridgeport.

LSU is adding an 18th gymnast to its roster with freshman walk-on Maddie Rau, Clark said.

A former Rutgers commitment, the Houston native will compete Friday on vault provided her school paperwork is in order, Clark said.

“We knew she was coming at midyear, but we couldn’t make any announcements until everything was done,” Clark said.

“She’s going to be a nice addition for us,” he said.

Junior Reagan Campbell, who won balance beam Friday with a 9.925 that tied for fourth-best nationally, is questionable this week (toe), Clark said. Freshmen Aloyna Shchennikova and Kai Rivers are “very close” to joining LSU’s beam lineup, he said. Shchennikova competed on uneven bars against Arizona while Rivers was on vault.

LSU is trying to get junior Christina Desiderio in on floor exercise but she has been hampered by a hip flexor, Clark said.

It's a homecoming of sorts at Georgia for LSU gymnastics coach Jay Clark, junior Sami Durante

With a trip to Georgia on the schedule Friday, LSU co-gymnastics head coach Jay Clark and Tiger junior Sami Durante knew the questions were bo…