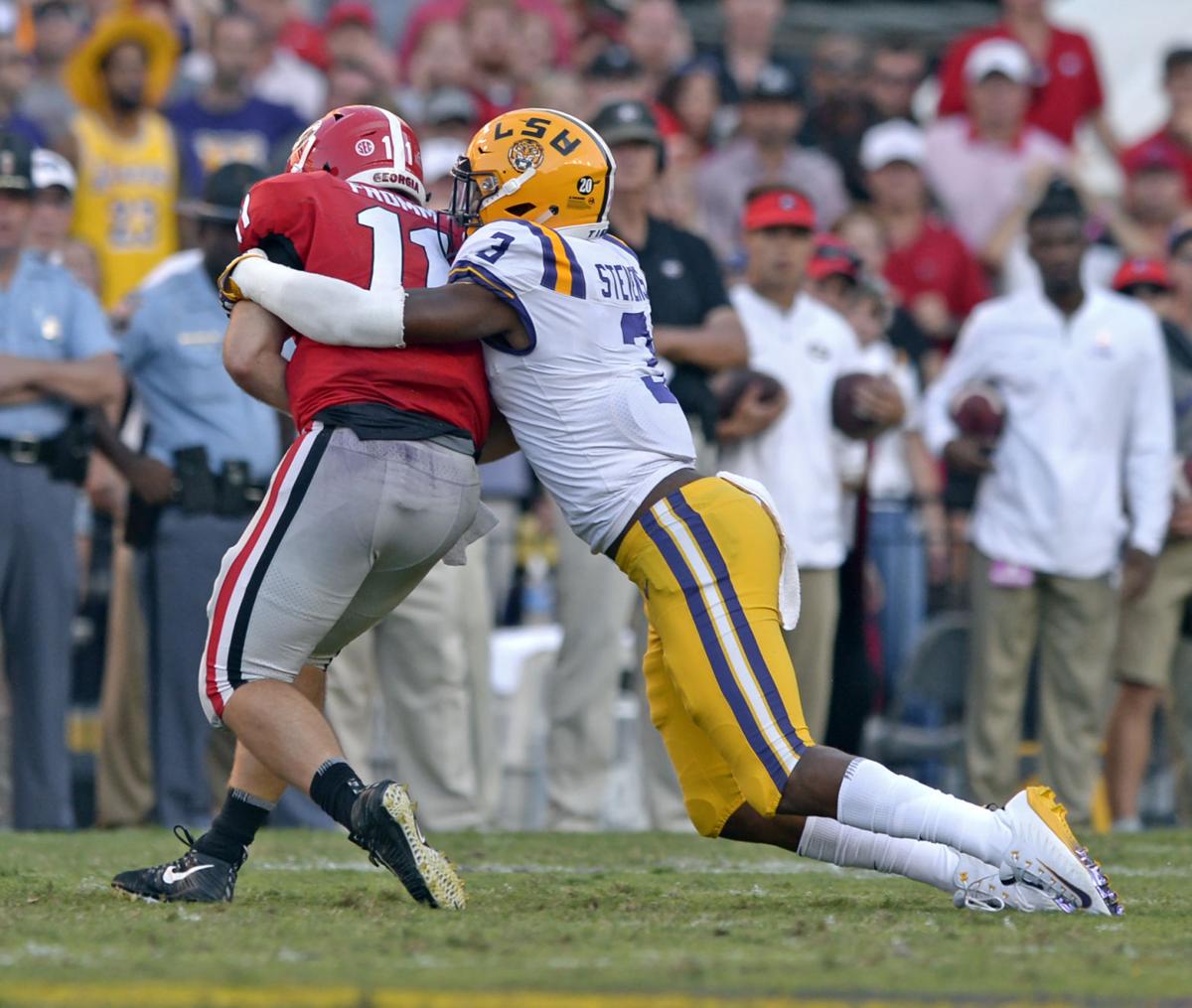 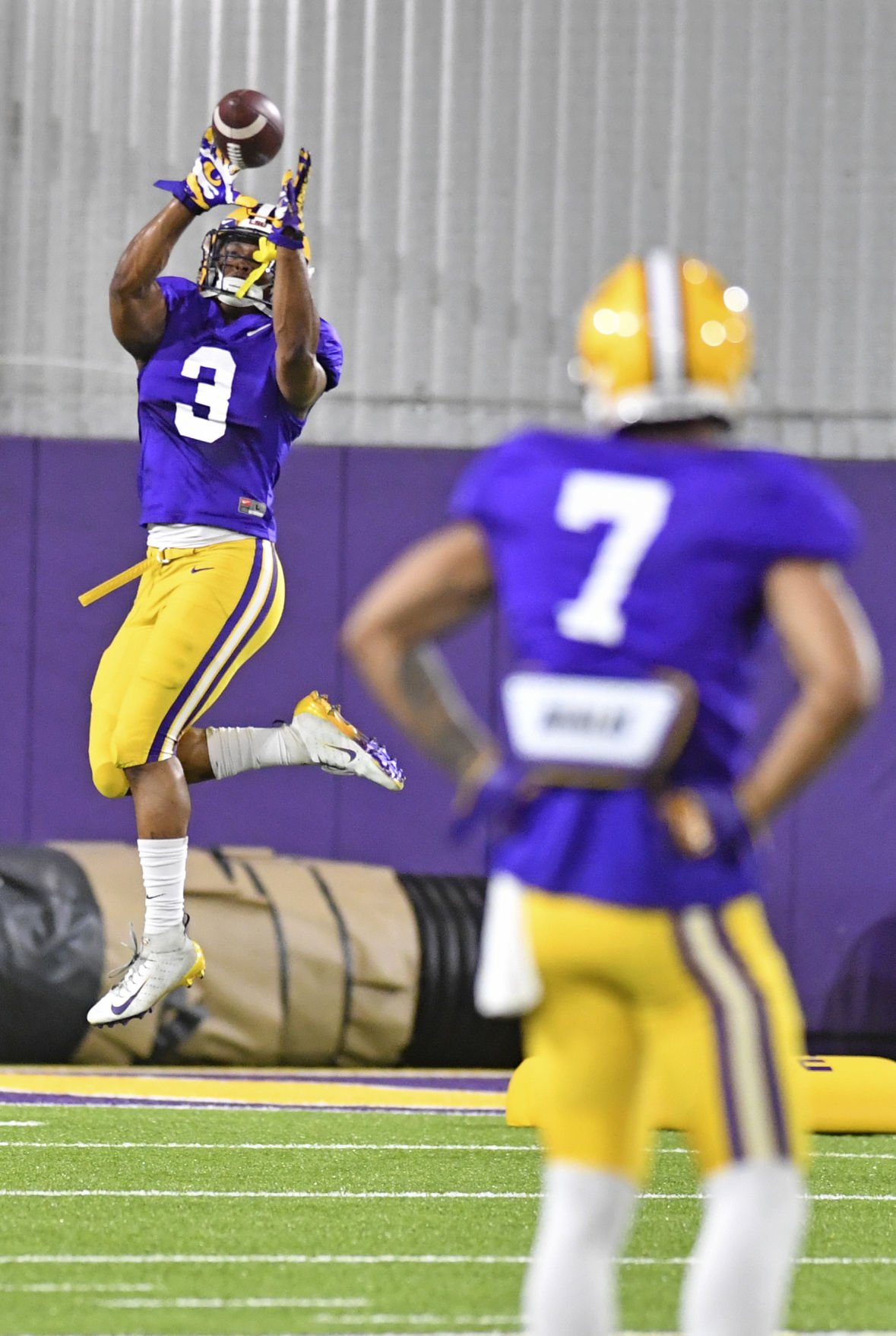 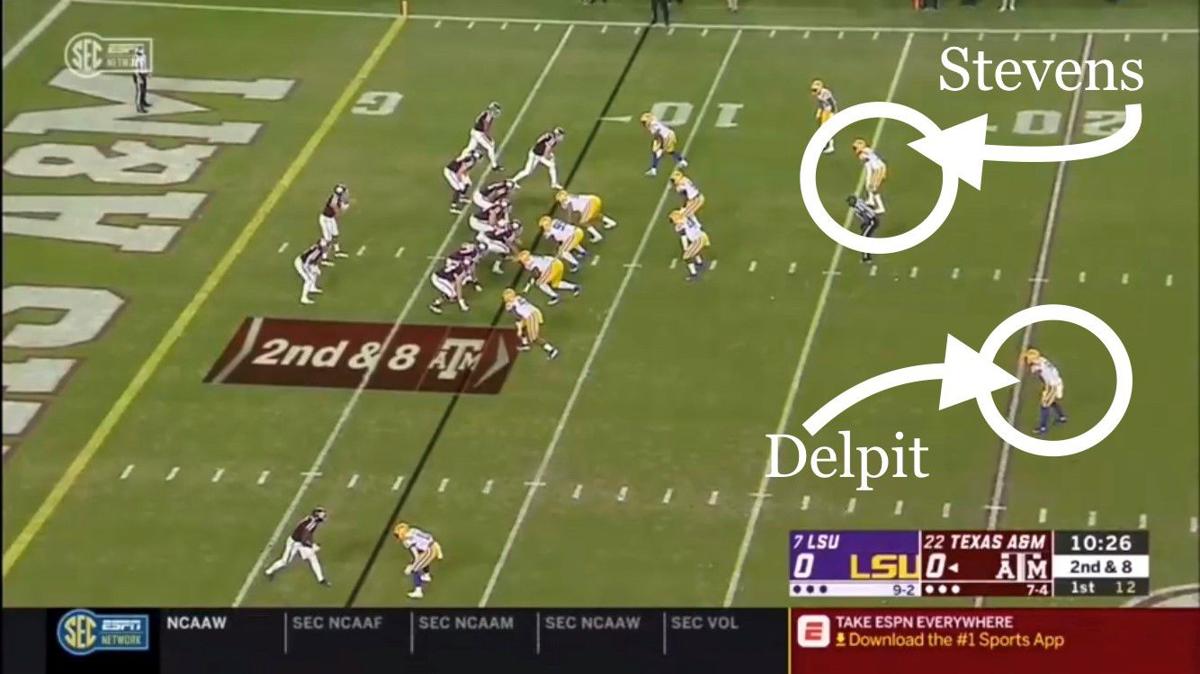 The defensive linemen are pushing, swatting, swiping in pass rush drills, and from across the LSU outdoor practice facility, JaCoby Stevens is watching, listening to the explosive grunts that echo off the fencing.

The Tigers safety sneaks a peek at the linemen every now and then, taking mental notes. He can apply to those notes to the blitzes he's running — and these days, he's in on more blitzes in defensive coordinator Dave Aranda's scheme.

Stevens studies the linemen's movements and footwork, and, yes, their grunts.

"I even try to do that sometimes," said Stevens, who started in four games as a sophomore last season, recording 35 total tackles and an interception. "I think that's the secret: The weird sounds is what gets them the sacks."

LSU's Foster Moreau has surprised leading up to the draft; 'They didn't expect me to do that'

Foster Moreau exceeded even his own expectations.

The struggles were well-documented, much of them stemming from the season-long loss of heralded pass rusher K'Lavon Chaisson, who has returned from the ACL injury he suffered in the season opener against Miami.

Stevens was one of several players who rotated to replace Chaisson, getting his first crack at outside linebacker in the Tigers' 22-21 win at Auburn on Sept. 15 — an experience Stevens said "kind of got my feet wet" toward adjusting to the college game.

But beneath all the personnel adjustments, Aranda had already started dedicating more play-calls to the scheme he's developed over his career, aiming to create more pressure on opposing quarterbacks.

Is Greedy Williams the best corner in the NFL draft? The LSU DB's answer and more from pro day

Greedy Williams played off as if he was shocked at the question: Was the LSU defender the be…

Aranda explained the philosophy the week before LSU's 40-32 win over Central Florida in the Fiesta Bowl on Jan. 1. Instead of overwhelming blockers with more defenders than they can handle, which can leave a risky hole in the defense, LSU rearranges its defenders to create the one-on-one matchups it wants — the ones in which the defender has the advantage and a higher chance of beating his blocker to get to the quarterback.

Many times, that meant Aranda would try to make sure his biggest matchup-buster at the time, inside linebacker Devin White — who just ran a position-best 4.42 40-yard dash at last month's NFL combine — got matched up with a running back that couldn't handle him.

But that also meant any LSU defender could be called on to create a favorable matchup on any given play.

Sometimes it was Grant Delpit, the consensus All-American strong safety, who tied the team lead with five sacks last fall.

Sometimes it was Stevens.

When free safety John Battle suffered an injury on the first play from scrimmage against Alabama on Nov. 3, it was Stevens who stepped in and started the final four games of the season.

And now that Stevens is first in line to get more playing time (Battle has departed to the NFL draft), Stevens needs to improve even more as a matchup-buster to become an effective piece in Aranda's defense.

Safeties coach Bill Busch has been Stevens' main tutor, taking him to the side during practice for extra lectures, bringing him into the LSU football facility for extra meetings to break down film.

Sometimes, Stevens said Busch will send him text messages with videos of random players like NFL strong safety Landon Collins, showing Stevens different ways of getting to the quarterback.

And the moves vary depending on who's blocking, because in Aranda's pressure system, if you can become a favorable matchup against a center, guard, tackle or running back, that makes you all the more valuable.

Speaking for the first time since his two year extension, $4 million contract was approved b…

Against an interior lineman, Stevens said, he's looking to isolate him, jab him with one arm to create distance, then swat away the blocker's arms while dipping his shoulder to get around to the quarterback.

Call it "the bop and swat."

Against a tackle, Stevens is looking to drift as close as possible to the blocker, then use his burst of speed to get around him while dipping his shoulder.

What about for a running back?

"Coach Busch says just run over him," Stevens said, who did just that while recording a sack in the Fiesta Bowl (see GIF below).

This spring, LSU coach Ed Orgeron said, Stevens has "worked hard on things that we need him to work hard at."

"He's one of our strongest guys, pound-for-pound," Orgeron said of Stevens, who is 6-foot-2, 225 pounds and was the No. 1 overall safety coming out of Oakland High in Tennessee, per 247Sports. "His coverage has gotten better, his understanding of the defense. He plays with a violent attitude. I think that we could use him in the rush, which you saw last year. We can use him in coverage. He is a very good player for us."

But where exactly does Stevens fit in?

Technically, Stevens was listed at free safety when he filled in for Battle, but Aranda rotates his secondary throughout a game and their roles can be amoebic.

Stevens said he played the "quarter" position, which is basically a combination of a safety and outside linebacker, lined up right near the linebackers (see diagram below).

That's the position Delpit played for most of the season before Battle's injury, and Delpit ended up playing more in deep coverage thereafter.

Against Texas A&M in the regular-season finale, it was Stevens who dropped toward the line often, blitzing off the edge and recording a tackle for loss (see GIF below).

But just because Stevens could potentially get more reps at quarter, Delpit can still be in a position to make the types of plays that made him a finalist last season for the Bronko Nagurski Trophy, which goes to nation's top defender (Kentucky's Josh Allen won the award).

"Grant's such a great all-around player, so versatile, where you can line him up anywhere and he'll play," Stevens said. "He can play the quarter; he can blitz; and he can play the middle of the field. Both of us on the field, I don't think it was a hard decision. Coach Aranda didn't have to get too technical to get me and Grant on the field at the same time."

That leaves juniors Todd Harris and Eric Monroe to battle it out for the free safety position. Harris played in 11 games, starting in one game in place of Battle against Louisiana Tech while Battle served a targeting suspension. Monroe did not play last season.

"I really don't see any difference in both of them," Stevens said. "They both can play on Saturdays. They're really making their job hard to choose who is going to start at that position."

Near the door at Yogalates on Perkins Road, behind the rows of regulars, two giant LSU defen…

Starting outside linebacker Michael Divinity worked out with inside linebackers during individual drills at LSU's open spring practice Tuesday.

Expectations keep getting higher for LSU's heralded true freshman Derek Stingley, who enrolled at the university so early, he was able to prac…

LSU's Kary Vincent is on the verge of two-sport stardom, just as his father would have wanted

Bennie Brazell walked across the track, wraparound sunglasses reflecting the sun, his men's relay team practicing behind him, and reached for …

What is the Run-Pass Option? A deep dive into LSU football's new offense

The man tasked with vaulting the LSU offense into the new age took center stage.

LSU's OL 'has taken accountability' for a sub-par 2018 season; Where do they go from here?