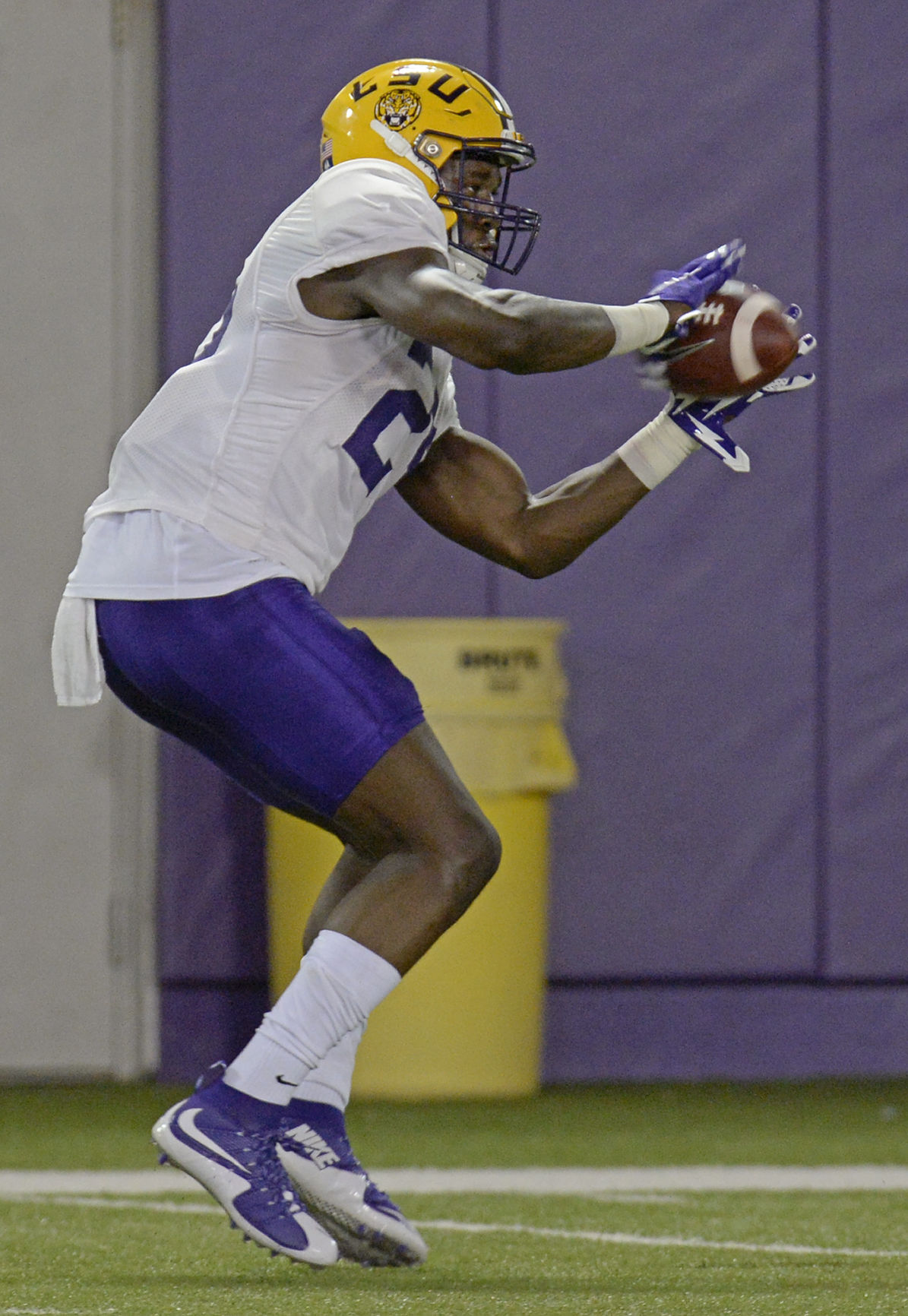 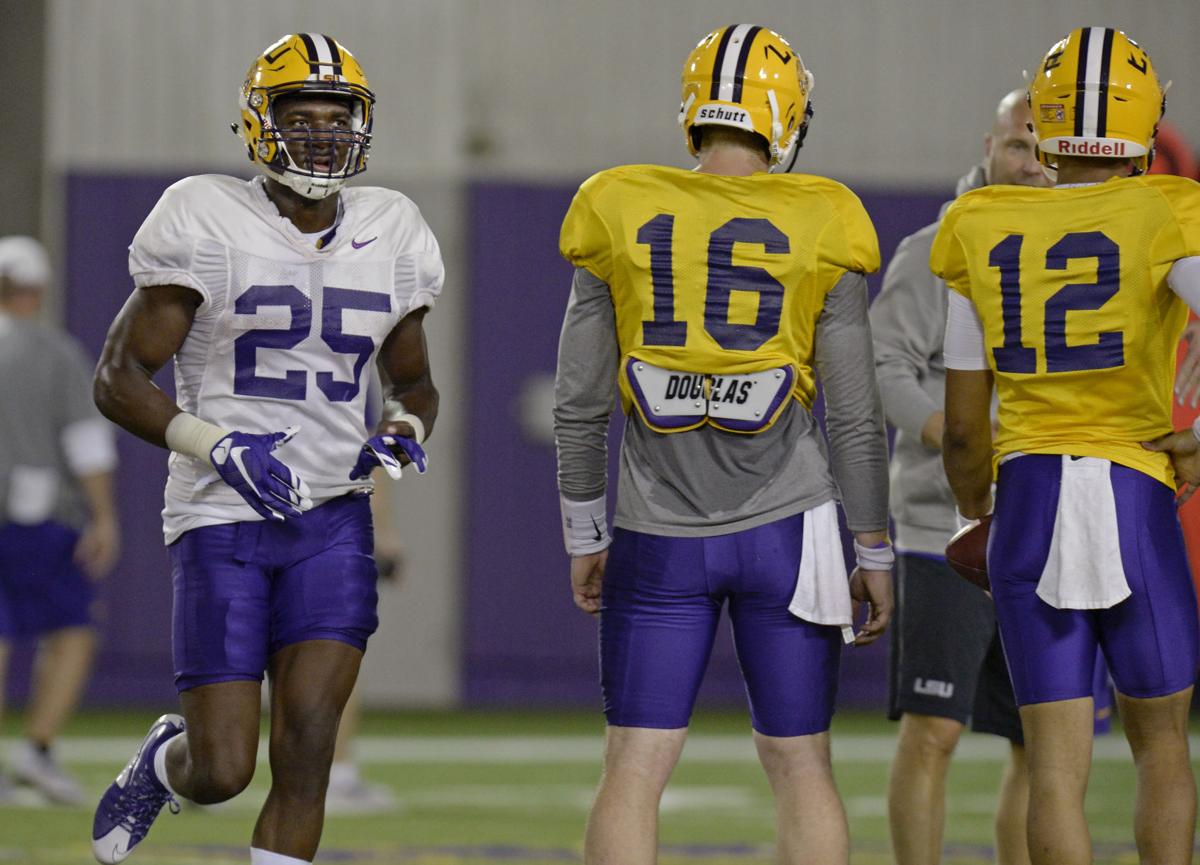 Drake Davis, No. 25, is poised to be LSU's kick returner. 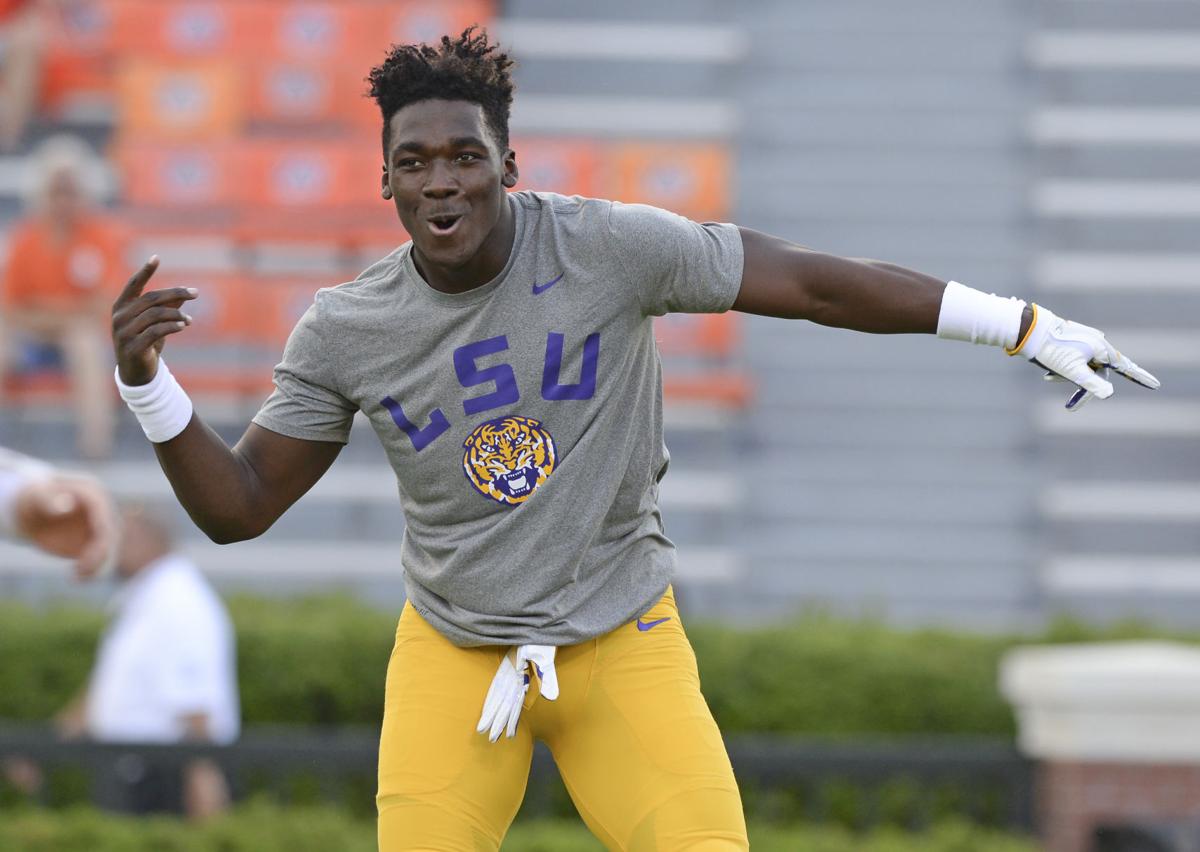 Drake Davis, No. 25, is poised to be LSU's kick returner.

D.J. Chark glances around himself and is reminded of … himself.

This used to be him. His talent was a talking point for LSU coaches. His experience was near zero, but his potential, everyone said, was off the charts.

He has passed on his old identity to guys like sophomores Drake Davis, Stephen Sullivan and Dee Anderson, players like freshman Mannie Netherly, third-year sophomore Derrick Dillon and even a fellow senior, Russell Gage.

“At first, when I think about it, I’m like, ‘Man, I was the guy helping other (experienced) guys,’ ” Chark said. “Like helping Travin (Dural). Now others are helping me. I talk to them and tell them it’s their time to step up, because a lot of guys are going to have their eyes on me. They’re going to have to step up if we want to do great things.”

Through 12 sessions of LSU’s 15-practice spring, the guy stepping up is quite clear: It’s Davis, the rookie originally from Baton Rouge whose freakish skills have sent waves through the team since he arrived in June.

Davis, a 6-foot-3, 215-pounder who players say can run a 4.3-second 40-yard dash, has emerged among the group of inexperienced players behind Chark. The Nos. 2 and 3 receiver spots are among the five most competitive open starting positions this spring.

On Wednesday afternoon, as he ran through drills at LSU pro day, Cyril Grayson had met with …

Receiver might have the least production returning of them all. The exits of Malachi Dupre and Travin Dural took with them the bulk of the Tigers’ receptions, yards and touchdowns from 2016.

LSU returns just 36 of 107 receptions (33.6 percent) made by receivers last year. The Tigers return 41 percent of their receiving yards and half of their eight touchdowns.

Much of the returning production is Chark. His 26 catches are 16 more than the other receivers have combined. And there are only six other receivers. This spring, the Tigers have the same amount of scholarship wideouts (seven) as they do walk-on wideouts, according to the roster.

Behind Chark, Gage is a converted defensive back who played his first year at receiver last season (all five of his catches came in one game). A redshirt in 2015, Dillon didn’t have a catch last season, and Anderson (four), Davis (one) and Sullivan (none) combined for five receptions during their true freshman year. Netherly, a midyear enrollee, was in high school three months ago.

Davis, Sullivan and Anderson have been unavailable for interviews this spring.

They all have their own set of skills, receivers coach Mickey Joseph said.

Sullivan is an explosive big body — a 6-6, 235-pound “possession receiver,” the coach said. Dillon is the shifty one, a “quick-twitch guy” who finds himself the slot most often. Netherly is a speedster, Joseph said.

Davis has it all.

He’s turning heads in spring practice like he did during preseason camp. Quarterback Danny Etling said he’s “one of the most improved of the spring,” and Chark said he has made some “fantastic plays.”

Players and coaches in August called Davis a “freak” and a “pretty special” player, a multi-sport star who has been seen in video catching a football while also dunking a basketball.

A hyped freshman year ended with that single 19-yard reception against Jacksonville State in the second game of the season. He didn’t see the field in six of 12 games but played in four of the final six.

Davis was behind the pecking order last season — Dupre, Dural, Chark and 2016 midyear enrollees Sullivan and Anderson. He was also playing in a pro-style offense that wasn’t necessarily friendly to receivers.

“I see us using a lot of guys at receiver,” Chark said. “Just the way everybody has their strengths and weaknesses.”

The top three are obvious: It’s Chark, Gage and Davis. Beyond that, there’s much to sort out. Sullivan and Dillon appear to be battling for the fourth spot. Anderson is trailing the others. He has been spotted at practice mostly watching drills, and Joseph suggested the receiver is behind his teammates.

It's no easy competition. This is a group of tall, talented guys who hope to finally show it — like Chark did last year — come the fall.

“We are a very talented group with speed, strength, power,” Gage said. “We have all the accolades, and so what (Canada’s) trying to get everyone to understand, if we’re able to put all that together, there’s no limit to what we can do for this season.

LSU returns half or fewer of its catches, yards and touchdowns by receivers from a year ago:

This is the fifth of a five-part series running this spring about LSU’s five most competitive starting positions.

LSU football position primer: A look at who will lead Tigers at key spots next season

With several key starters gone from LSU after last season, here's a look at who will likely be manning several important spots next time they …

Donnie Alexander's time is here at LSU, even though he never thought it'd come

Donnie Alexander really did think his opportunity to play at LSU had passed.

Fresh off a visit to the New Orleans Saints, former LSU linebacker Kendell Beckwith is en route to Indianapolis for a medical recheck of his s…