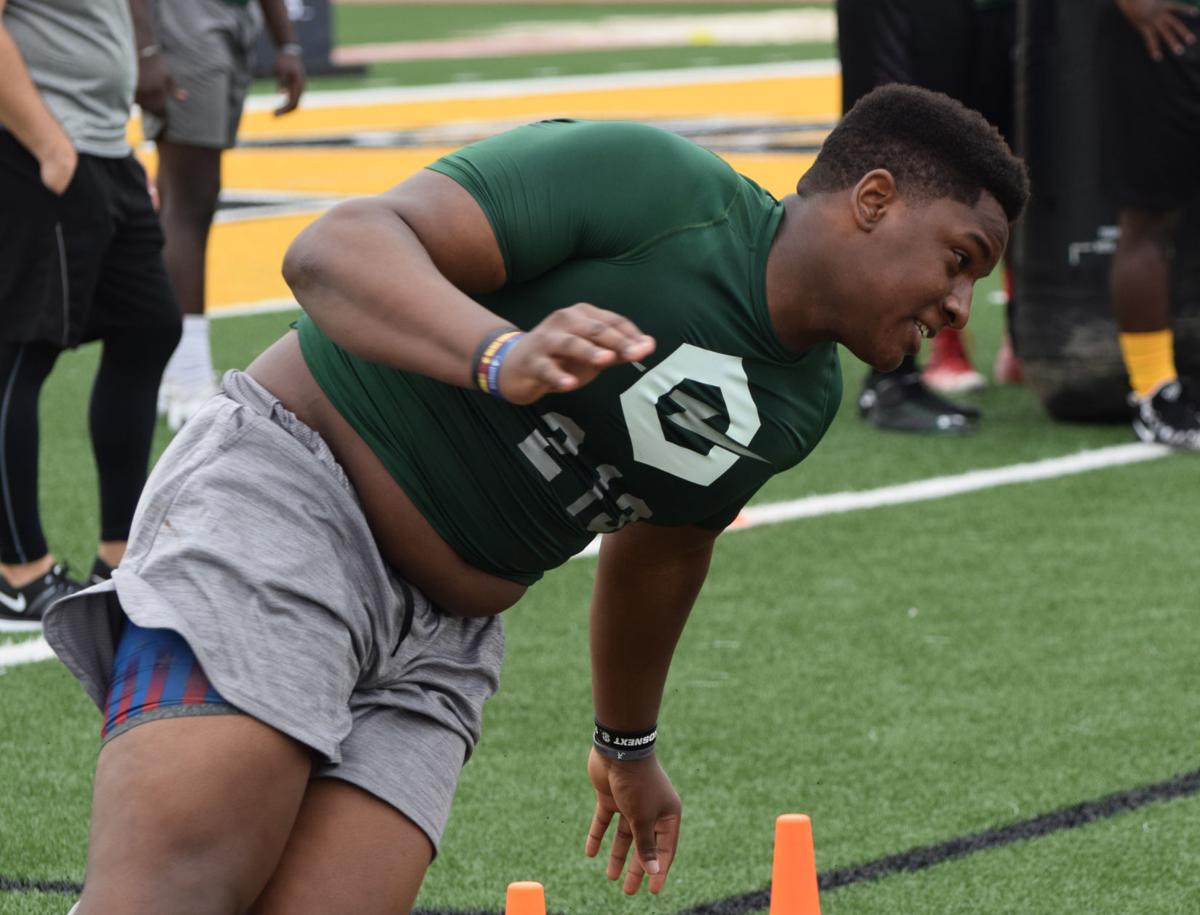 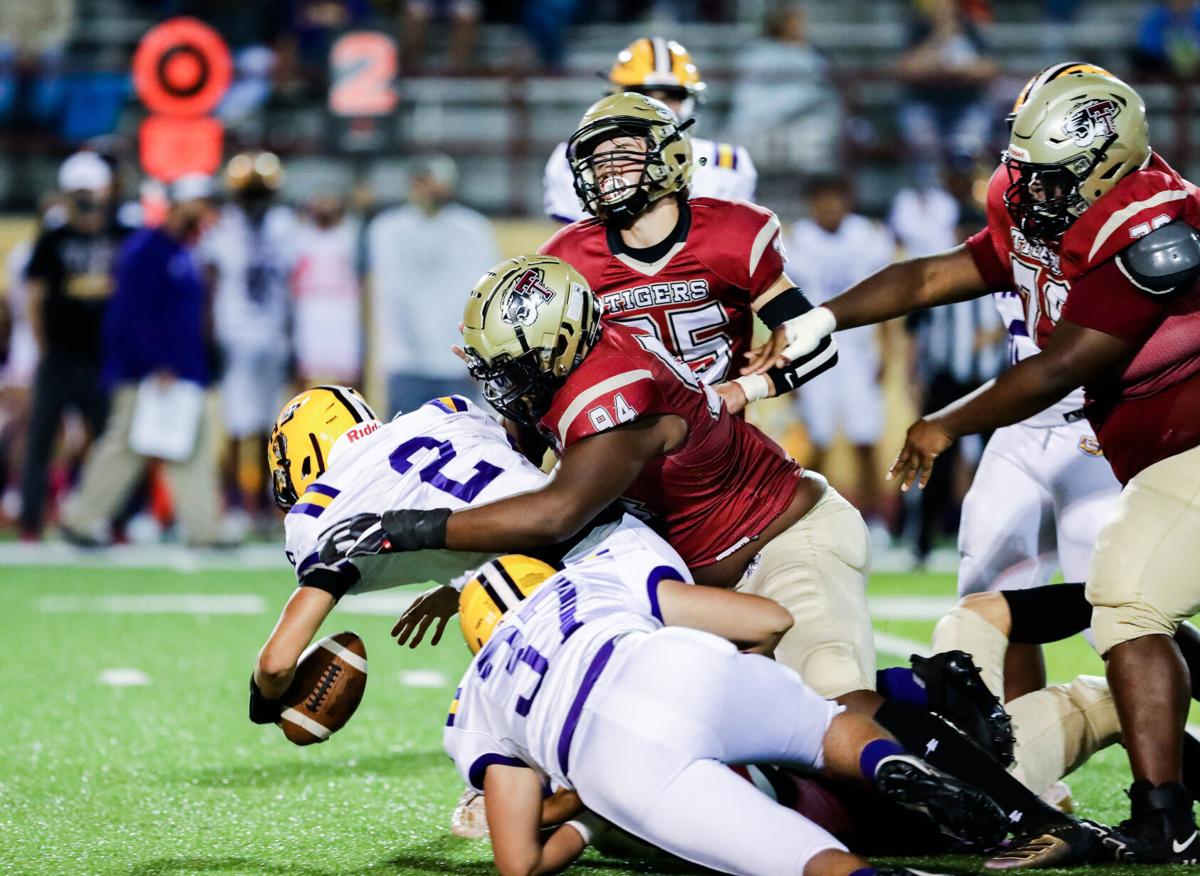 Terrebonne High School defensive tackle Maason Smith, a five-star prospect, signed with LSU on Wednesday, helping the Tigers build a recruiting class that ranks No. 4 in the nation.

Terrebonne High School defensive tackle Maason Smith, a five-star prospect, signed with LSU on Wednesday, helping the Tigers build a recruiting class that ranks No. 4 in the nation.

The five-star defensive tackle from Terrebonne High was aware he had a captive audience that extended beyond the small group inside the auditorium. More than a thousand people tuned into his personal Instagram account’s live feed to see just which school he’d choose on the first day of the NCAA’s early signing period.

The Houma-Terrebonne Civic Center knew there was interest, too. They put Smith’s name and smiling face up on their welcome sign’s video board along Highway 182. “SIGNING DAY,” it read, along with logos for Alabama, Georgia, LSU and Miami.

But few were still watching the table to notice Smith was no longer there. He emerged again from behind the bleachers, wearing a white LSU jersey. The group cheered. He donned a purple cap and signed his scholarship paperwork.

Are you not entertained? Too much suspense? There were plenty of surprises on Wednesday, when LSU signed 19 players — a recruiting haul that ranks fourth nationally, according to 247Sports, behind Alabama, Ohio State and Georgia.

LSU signed eight Top 100 recruits, including all three of the such-rated Louisiana prospects who made decisions on Wednesday. Walker High wide receiver Brian Thomas, the nation's No. 79 overall recruit, still has yet to sign anywhere.

That in itself was a major victory for LSU and fifth-year head coach Ed Orgeron, who is in the middle of his most rocky season yet. The Tigers (4-5) have self-implemented a one-year bowl ban and are trying to avoid their first losing record since 1999 in the season finale against Ole Miss on Saturday.

Smith was LSU's biggest victory on Wednesday, the crown jewel of a recruiting class who symbolizes several of Orgeron's key recruiting values: top-rated, homegrown talent who plays on the defensive line.

Orgeron pledged to recruit better defensive linemen after LSU's crushing 29-0 loss to Alabama in 2018, and, after a mixed battle in last year's cycle, Orgeron firmly beat out the likes of Alabama and Georgia by signing Smith.

Orgeron also delivered on this season's pledge to sign more safeties. LSU's defense ranks last in the nation in passing defense, and Orgeron acknowledged during his call-in radio show in October that "there is a deficit" at the position.

On Halloween, LSU beat out Alabama for five-star safety Sage Ryan, a Lafayette Christian Academy product who stuck with the Tigers even after embarrassing losses to Auburn, Alabama and Texas A&M.

"Obviously, we've built relationships," Orgeron told reporters Monday. "Again, these guys saw last year one of the best teams to ever play in college football history, and they remember that."

A hallmark of LSU’s storm-tossed 2020 football season has been the Tigers’ inability to put together back-to-back wins.

LSU still has six available scholarship slots remaining. Orgeron has previously said that he wants to pursue more offensive linemen, whether it be through February's signing day or exploring the NCAA transfer portal.

Garrett Dellinger, the nation's No. 14 offensive tackle, remains LSU's only signee on the offensive line. Orgeron said on his weekly radio show Wednesday night that there are "three or four" offensive line targets out there.

Breaking down LSU’s recruiting efforts in the 2020 early signing period:

A reporter asked Smith who he might be trying to help LSU recruit.

"For one, Tristan Leigh from Virginia," Smith answered. "I'll try to get him for sure."

Leigh found the interview on Twitter and responded: "Bro bro."

Most of the players who signed with LSU on Wednesday were shoe-ins: 14 signees were already committed to the Tigers. Five of them — beginning with four-star quarterback Garrett Nussmeier — sent LSU their paperwork before 8 a.m.

Ryan, the nation's No. 2 safety, eliminated any drama when he arrived at his 4 p.m. signing wearing LSU gear from head to toe.

LSU lost a total of three recruits to other schools in the past week, including four-star cornerback Nathaniel Wiggins, who decommitted from LSU on Saturday and officially signed with Clemson.

LSU made up for Wiggins by signing four-star cornerback Damarius McGhee, a Pensacola, Florida, native who signed his paperwork on ESPN2 just before noon.

Nabers wasn't as high-profile a signing as Earle, but LSU still wrangled four total wide receivers: Deion Smith (nation's No. 10 wide receiver) was the top-ranked recruit in Mississippi; Zachary High's Chris Hilton (No. 11 WR) was the third-ranked player in the state; and St. Thomas More's Jack Bech (No. 57 WR) is a 6-foot-2, 215-pound hybrid who can also play tight end.

Strong's signing follows Orgeron's emphasis to sign graduate transfers and junior college players who can contribute immediately next season. LSU is facing a major roster management problem: only 54 scholarship players played against Florida last week, and it's likely LSU will enter next season with fewer than the 85 maximum.

LSU signed seven Louisiana recruits, including the nation's top punter in Peyton Todd. The 6-foot-5, 210-pounder from West Monroe is the first punter to sign with LSU since Josh Growden in 2015, and he's expected to replace senior Zach Von Rosenberg.

Goodwin decommitted from Auburn in November, and he announced Wednesday evening that he's officially signing with LSU.

There was a championship parade. There were floats and beads and fans. There was a small period of pre-pandemic celebration, the kind of victo…