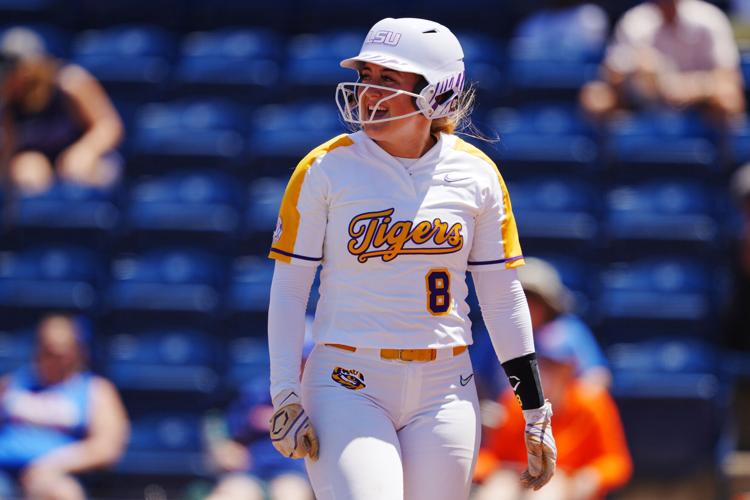 LSU left fielder Savannah Stewart smiles after scoring a run during the Tigers' game against Mississippi State in the Southeastern Conference tournament Wednesday in Gainesville, Fla. 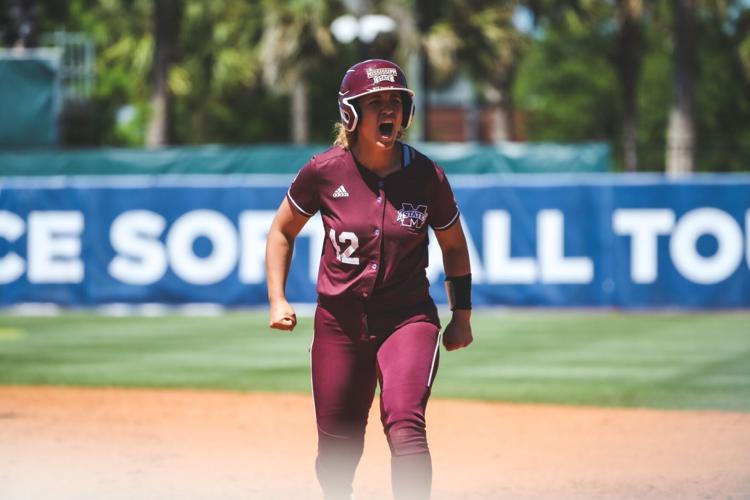 Mississippi State's Shea Moreno celebrates a hit during Wednesday's game against LSU in the Southeastern Conference softball tournament in Gainesville, Florida. The Bulldogs won 7-4, eliminating LSU from the tournament.

LSU left fielder Savannah Stewart smiles after scoring a run during the Tigers' game against Mississippi State in the Southeastern Conference tournament Wednesday in Gainesville, Fla.

Mississippi State's Shea Moreno celebrates a hit during Wednesday's game against LSU in the Southeastern Conference softball tournament in Gainesville, Florida. The Bulldogs won 7-4, eliminating LSU from the tournament.

For the first time since 2015, LSU will have to go on the road for the NCAA softball regionals.

The Tigers could’ve earned a top-16 national seed and the right to host an NCAA regional with a strong performance at the Southeastern Conference tournament in Gainesville, Florida, this week.

Instead, 11th-seeded Mississippi State crushed those hopes Wednesday with a 7-4 win in nine innings over sixth-seeded LSU in the first round.

LSU (34-21) rallied from down 4-2 in the bottom of the seventh off doubles by Danieca Coffey and Ciara Briggs to tie the game. But the Tigers fell apart in the top of the ninth, when Mississippi State (35-23) scored three runs off a grounder down the third-base line, a liner to left and a sacrifice fly to right.

Coach Beth Torina's LSU teams now have lost in the first round of the conference tournament six times in her 10 seasons in Baton Rouge.

“I thought our team showed a lot of fight in the seventh inning," Torina said. “I thought it was ours for the taking there a couple times in extra innings, but just couldn't seem to come up with a big hit.”

Bulldogs starting pitcher Annie Willis pitched 5⅓ innings, holding LSU’s top six hitters to only two hits in 16 at-bats. Kenley Hawk blew the save for the Bulldogs in the seventh, but Aspen Wesley steadied the ship when she entered the game in the eighth.

Wesley inherited two runners with nobody out, but she struck out three LSU hitters in the inning. Overall, LSU stranded 10 runners — including four across the fifth and sixth, prime chances to cut into the Bulldogs’ lead.

LSU elected to start Shelbi Sunseri in the circle instead of Kilponen, who threw 223 pitches on Friday and Sunday, also against Mississippi State. But Torina pulled Sunseri in the third inning after she allowed three hits and three runs. Kilponen tallied another 110 pitches, bringing her total to 333 in just six days.

The Bulldogs had little trouble with Sunseri’s dropballs en route to an early 2-0 lead. Mia Davidson cranked one pitch off the left-field wall, and Shea Moreno sent another out of the park in the first inning.

Sunseri got herself into scoring position in the second inning with a double to the right-field wall. Morgan Smith then tied the game with a two-run homer, the first of her career.

Kilponen trotted to the circle in the third, hoping to force Mississippi State to adjust to her high-velocity riseballs. But the Bulldogs quickly extended their lead with an infield RBI single and a double deep to right field, just out of Smith’s reach.

Then the bats fell silent on both sides.

Mississippi State preserved its 4-2 lead by retiring seven of LSU’s next eight batters. From the fourth to the seventh, Kilponen and the LSU defense retired 13 consecutive Mississippi State batters.

In the bottom of the seventh, Coffey diagnosed a dropball inside and cranked it to the right-field wall, igniting the LSU offense to set up the tie.

In the top of the ninth, Mississippi State took advantage of a fatigued Kilponen. The Bulldogs had four straight hits, each on the first pitch from Kilponen. The three go-ahead runs were too many for the Tigers to overcome.

LSU now will wait to learn where it will compete in regional play when it is announced Sunday. The NCAA tournament begins May 20.