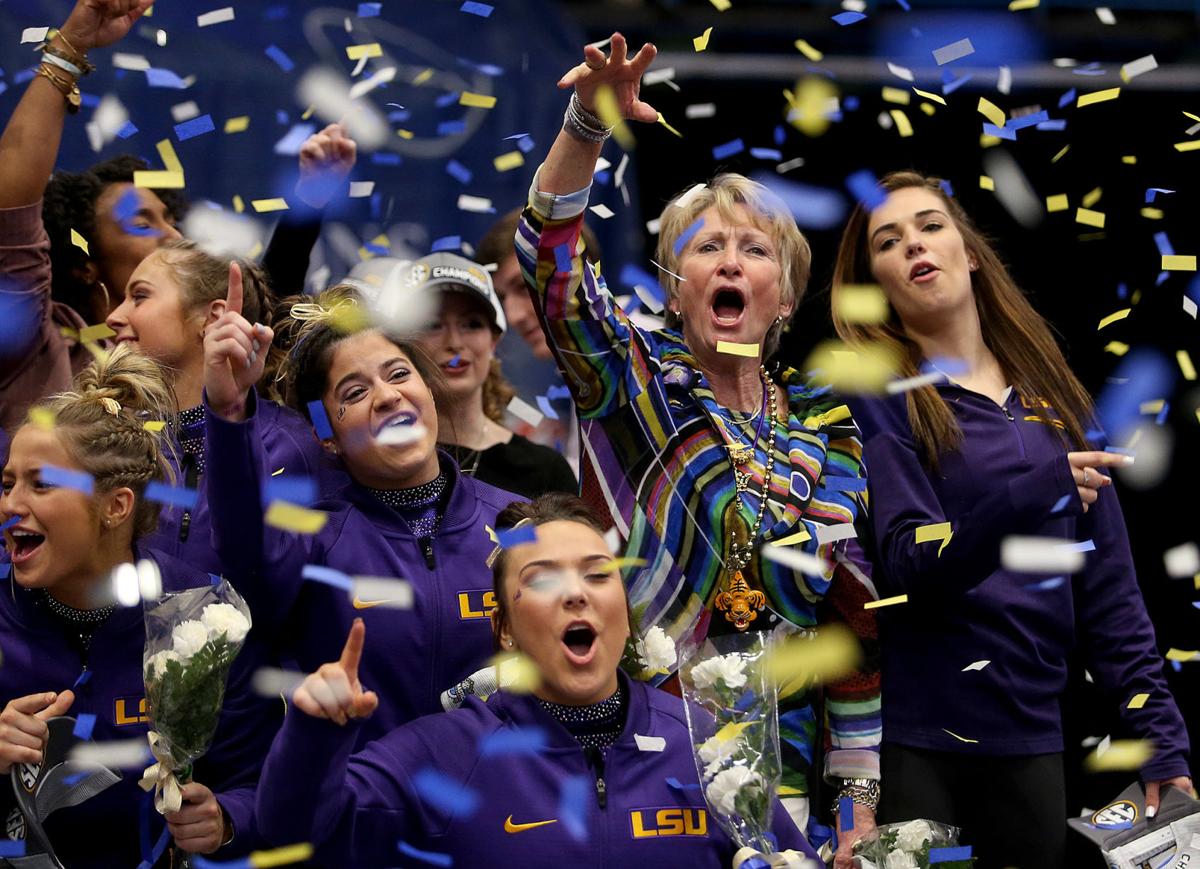 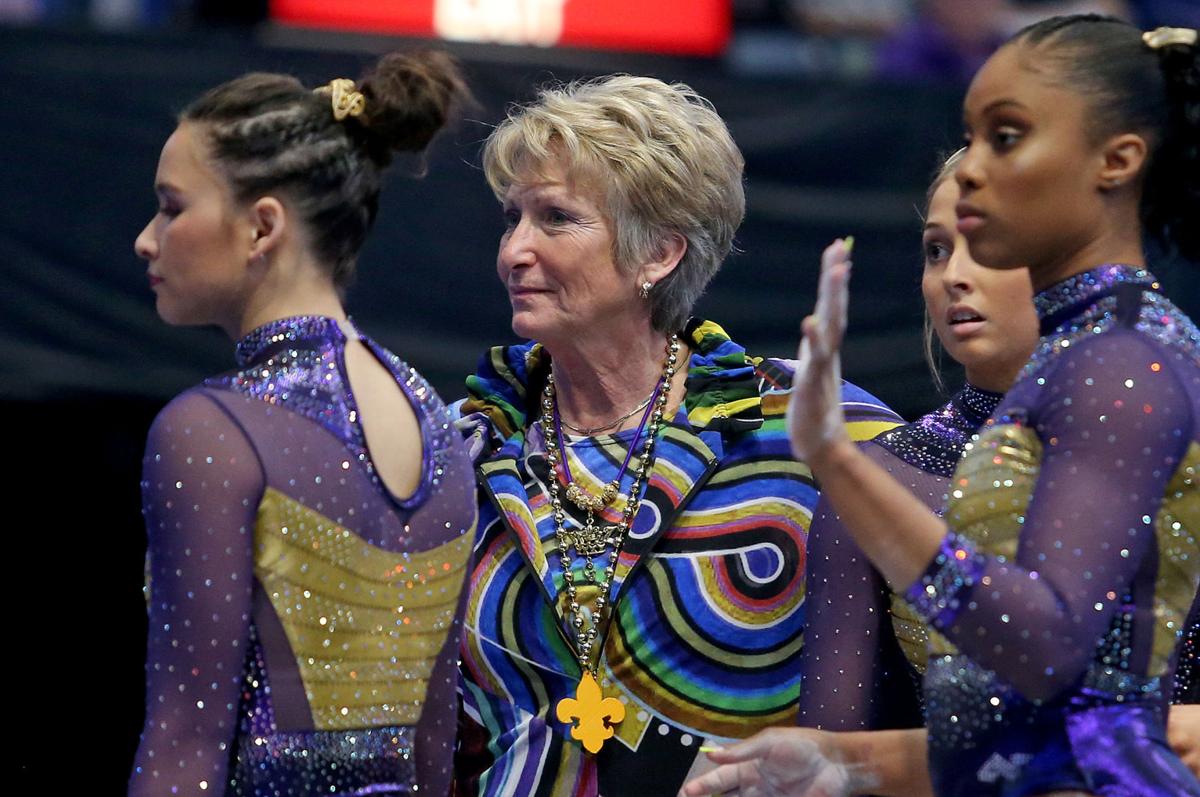 They will drop new banners in the Pete Maravich Assembly Center on Friday night for LSU’s gymnastics season opener against Arizona.

One banner will chronicle the Tigers’ third NCAA runner-up finish in the past four seasons behind Oklahoma. Two other banners will commemorate two more NCAA individual titles won by Sarah Finnegan and Kennedi Edney.

Edney, a two-time NCAA vault champion, returns for 2020. But Finnegan, the 2019 AAI Award winner and a 23-time All-American, is gone, along with classmates McKenna Kelley, Lexie Priessman and Julianna Cannamela.

With them exiting the stage, it would be easy to describe the 2020 season as a transition year for LSU. But co-head coach D-D Breaux — who admitted she thoroughly enjoyed the Peach Bowl, in which Ed Orgeron's team hammered Oklahoma — isn’t giving in to lower expectations for her program.

“We just feel like we’ve got the foundation for a great team,” said Breaux, entering her 43rd season as LSU’s coach, an ongoing record for all Southeastern Conference coaches in any sport.

The reason for Breaux’s feisty optimism is peppered throughout LSU’s roster.

The Tigers, who were ranked No. 2 behind OU in the preseason Women’s Collegiate Gymnastics Association poll last month, have two seniors in Edney and Ruby Harrold, a 2016 Olympic gymnast for Great Britain.

“The expectation is always to build on the previous year,” Harrold said. “We’re always talking about being better than the day previous, the meet previous. Right now this week is a starting point.”

The roster is bookended by a freshman class that on paper is arguably as strong as the senior class that’s leaving.

While Breaux and new co-head coach Jay Clark — promoted in the offseason from a longtime role as Breaux's top assistant — were still tinkering with the lineup this week, Johnson is expected to join Edney as an all-arounder right from the first trip down the vault runway.

“Kiya Johnson will be the freshman who has that ‘wow’ factor,” Breaux said. “A lot of people saw her do four events at our 101 (exhibition in December). She’s steady and consistent and works at a very high level of difficulty, and she makes it look easy.”

Johnson added: “I’m really excited. This is what I came to LSU for. It feels like a really long preseason, so I’m excited to get going.”

Like several of LSU’s gymnasts, Shcennikova is coming off an injury, in her case an Achilles tendon. It will keep her off of most events for now, though she will perform on uneven bars with a routine that Breaux said was “as good as any collegiate bar routine in the country.”

Between Edney and Johnson as all-arounders and three events by Harrold (vault, bars and floor), LSU should have 11 of the necessary 20 routines covered. The other nine routines will need to be filled by freshmen and LSU’s large junior contingent: Reagan Campbell, Bridget Dean, Christina Desiderio, Sami Durante, Sarah Edwards and Olivia Gunter from Mandeville. Desiderio is one of LSU’s recuperating gymnasts, coming off of offseason shoulder surgery.

An increase in required start difficulty in collegiate gymnastics has resulted in some changes to the Tigers’ routines.

“I hope we don’t struggle with that on Friday,” Breaux said. “I anticipate it may be a little dip in quality of execution. But I feel it’s something we have to do if we’re going to be successful at the end of the season. It’s an issue every team is going to have to face.”

First events start at 7:15 p.m. in the Pete Maravich Assembly Center. The meet will be shown online only on SECNetwork+ via WatchESPN.com and the WatchESPN app.

Sophomore gymnast Bailey Ferrer announced on social media recently that she will not compete for LSU this season. Breaux confirmed that the Orlando, Florida, native will likely sit out this season, citing unspecified personal reasons.

“You can’t predict when some of these young people have personal issues,” Breaux said. “I don’t expect her to compete this year, but I think she’ll be better because of the support the LSU family is giving her.”

Breaux said Ferrer’s absence will leave LSU “a little short on bars” in terms of depth, but “I just feel people are going to step up and get the job done.”

Kelley ends up at Arkansas

Turns out McKenna Kelley’s younger sister won’t be following her as an LSU gymnast after all.

Emma Kelley, youngest daughter of Olympic gymnastics legend Mary Lou Retton, recently switched her commitment to Arkansas. She will compete for the Razorbacks starting in 2021.

*-Will not compete this season