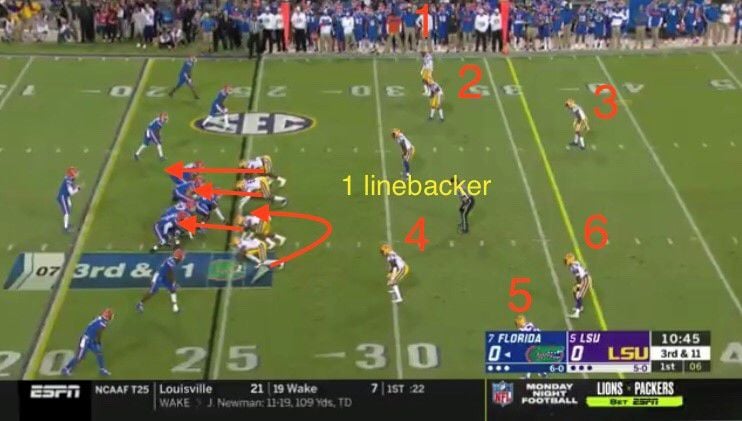 LSU quarterback Joe Burrow said "that's about as flawless as an offensive line has ever played that I've ever seen." He said he "didn't feel pressure the entire time, let alone the sacks. I made a couple bad protection calls which might have been the only reason I'd been pressured tonight."

LSU jumps big in AP Top 25 poll after 42-28 win over Florida; See where the Tigers rank

The LSU football team jumped to No. 2 in the latest rankings of the AP Top 25 poll, which was updated and released Sunday afternoon.

So how did LSU bottle up the Florida pass rush?

Florida blitzed on the first drive of the game. #LSU knew they hadn’t much all season, but were prepared due to reputation.Edwards-Helaire picks up the safety and Burrow delivers an easy throw(Magee and Charles double Greenard, and seem to come close to that 3-yard threshold) pic.twitter.com/VlAAExqIT9

Here’s where #LSU’s new spread offense neutralizes the pass rush.Florida gets a good rush here with a few line stunts, and LT Saahdiq Charles shoves Kyree Campbell (55) inward to pick up the blitzing safety.Campbell gets a hit on Burrow, but a quick slant gets the first. pic.twitter.com/SmMV1fcVhW

LSU-Mississippi State scheduled for 2:30 p.m. on CBS, the SEC announces

The Southeastern Conference announced Sunday that LSU will play Mississippi State at 2:30 p.m. on Saturday on CBS.

Creating the pass rush: LSU didn't record a sack in the first half, either.

LSU defensive end Breiden Fehoko said LSU's scheme at first was to play the run more than to pass rush. Orgeron said that plan eventually became a problem because Florida attacked the LSU defense with more first-down passes than they expected.

Indeed, Florida passed on first down the majority of the game (20-of-37), and Gators quarterback Kyle Trask completed 8-of-18 attempts for 125 yards — not an entirely efficient stat line, but with the additional time permitted in a clean pocket, he was still able to complete five passes of over 15 yards.

Part of the issue for LSU was also getting a good jump on the ball. Fehoko said Florida was going on a silent snap count, something the Gators probably imposed due to the raucous sellout crowd at Tiger Stadium.

"Even we couldn't get a clue on what they were going on," Fehoko said.

#LSU committed to the first-down pass rush. They sent six on the first play of the second half. Trask completes a well-executed back shoulder throw to Jefferson for a first down. https://t.co/kZe7oU9uBM pic.twitter.com/XPrlqMBe6V

LSU vs. Florida on first down

LSU has found its contender identity, a sense of moment in big-time games; 'There was no panic'

The LSU defense produced the stop the Tigers needed against Florida: an interception by true freshman Derek Stingley in LSU's end zone to pres…

Lagniappe: In special seasons, there always seems to be behind-the-scenes stories when either a coach or a player has a sense of the moment. There was such a story on the final touchdown of the game against Florida, when Burrow threw a 54-yard touchdown pass to Ja'Marr Chase. "We wanted to put the game away there," Burrow said.

Paratroopers dropping out of the cool October sky. A full moon rising silently over a sold-out Tiger Stadium.

It was said to come down to the trenches, this top-10 showdown between undefeated teams chasing a championship.

When LSU needed a play to beat Florida, Derek Stingley Jr. made it: 'He's got it'

Freshman cornerback Derek Stingley Jr. struggled against No. 7 Florida, but with the game on the line, Stingley forced the only turnover in No. 5 LSU's 42-28 win.