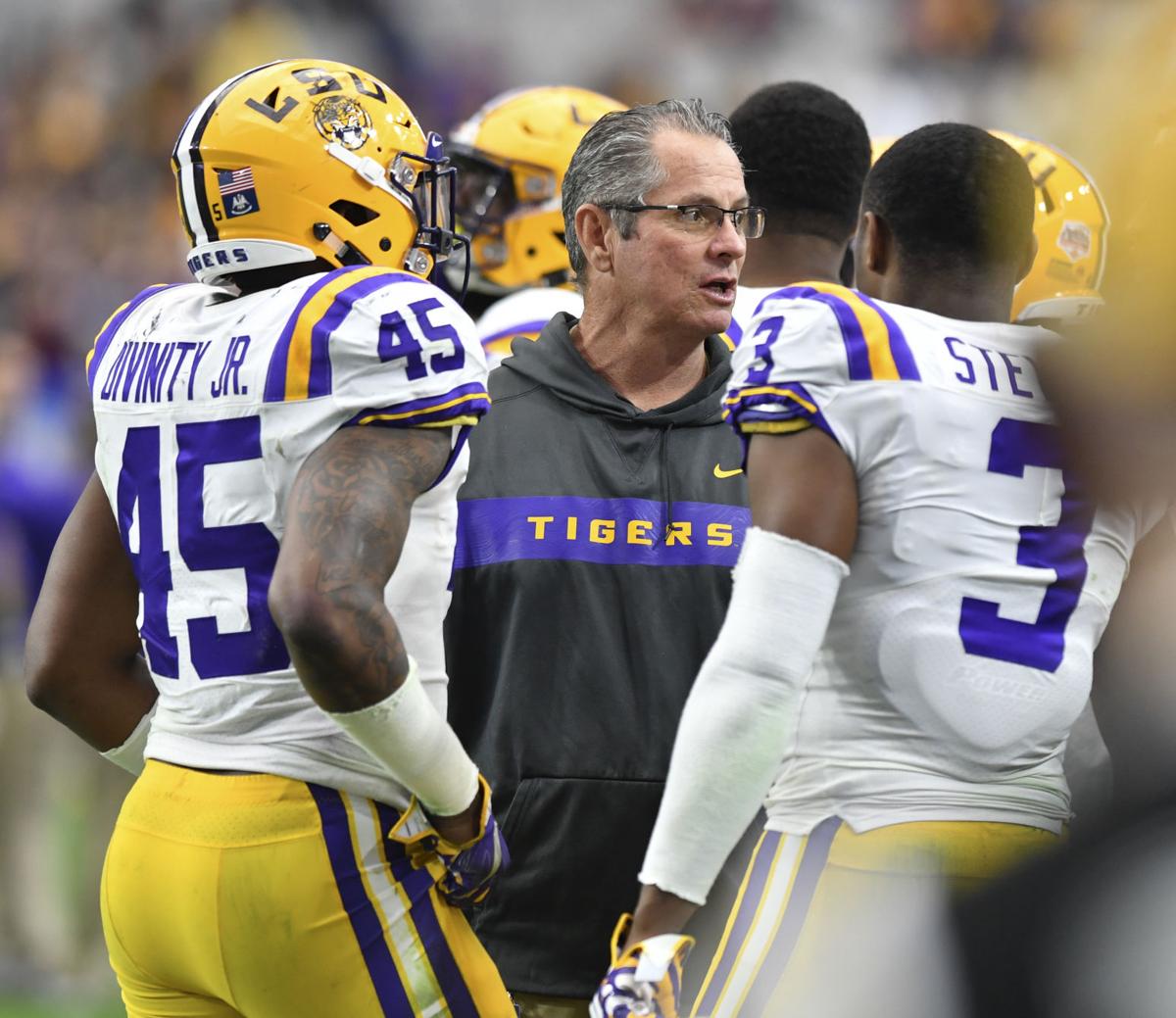 LSU strength and conditioning coach Tommy Moffitt speaks with LSU outside linebacker Michael Divinity Jr. (45) and LSU safety JaCoby Stevens (3) on the sidelines in the second half of the Tigers' 40-32 win over the previously undefeated Knights in the PlayStation Fiesta Bowl, Tuesday, January 1, 2019, at State Farm Stadium in Glendale, Az. 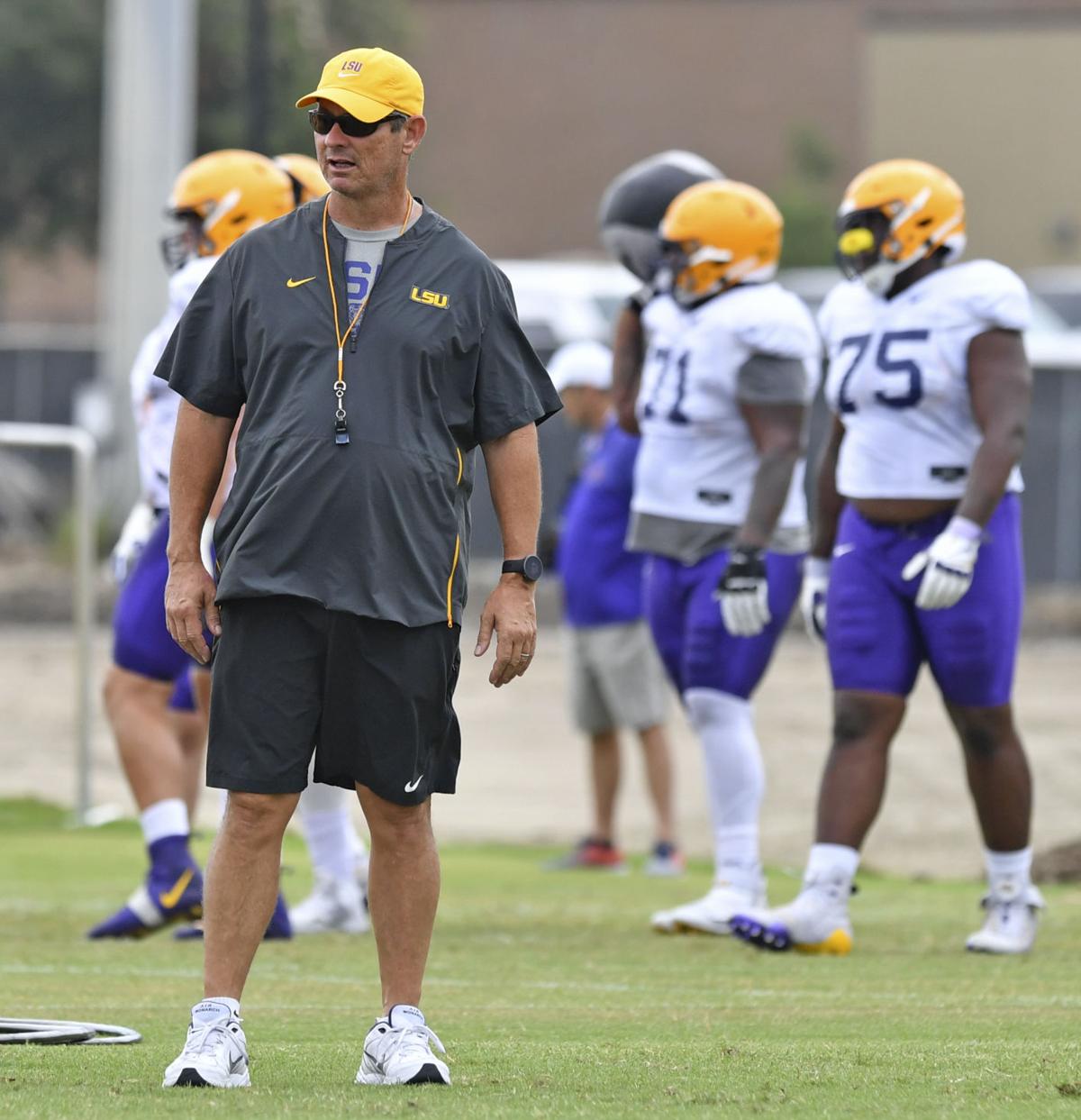 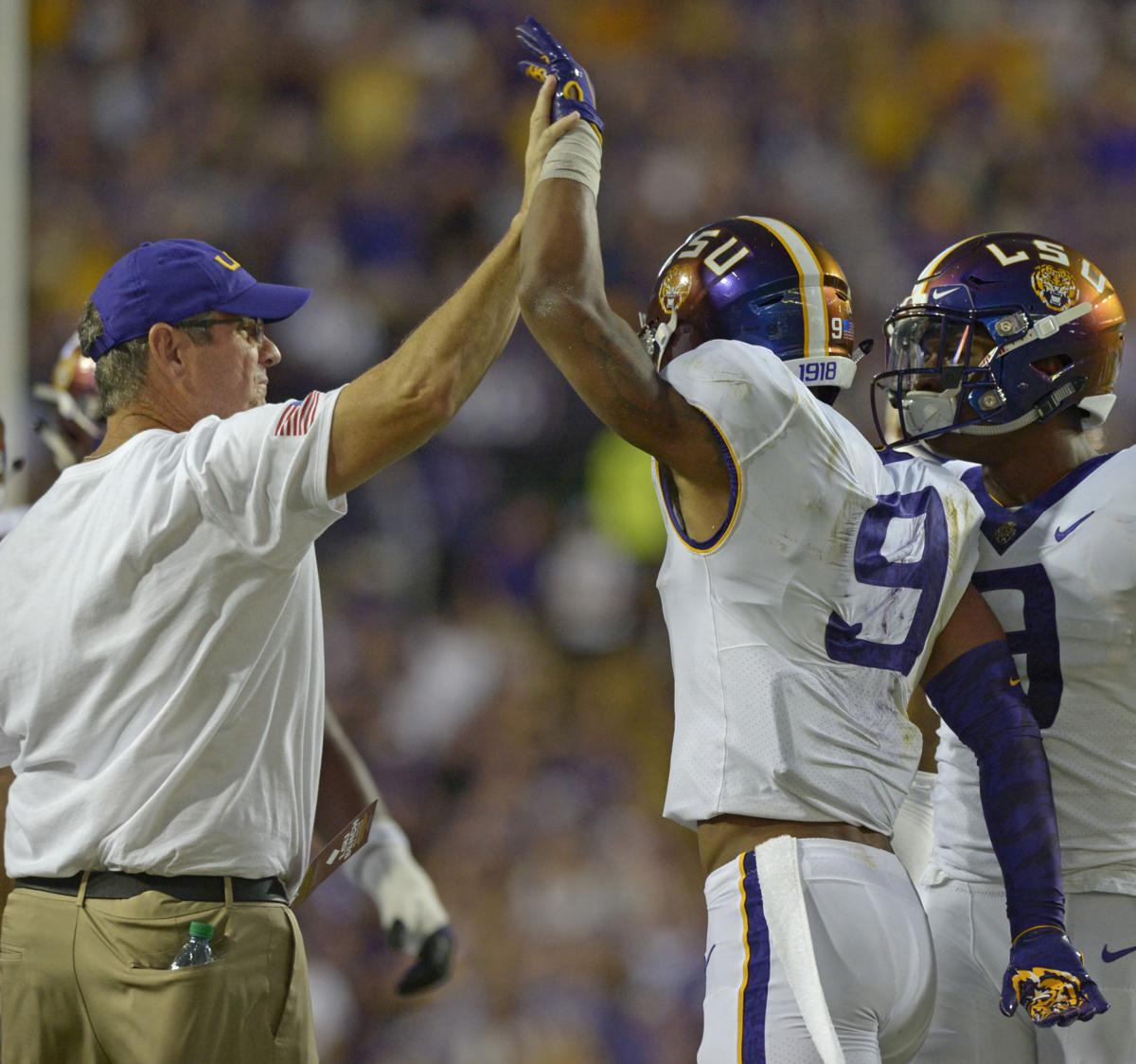 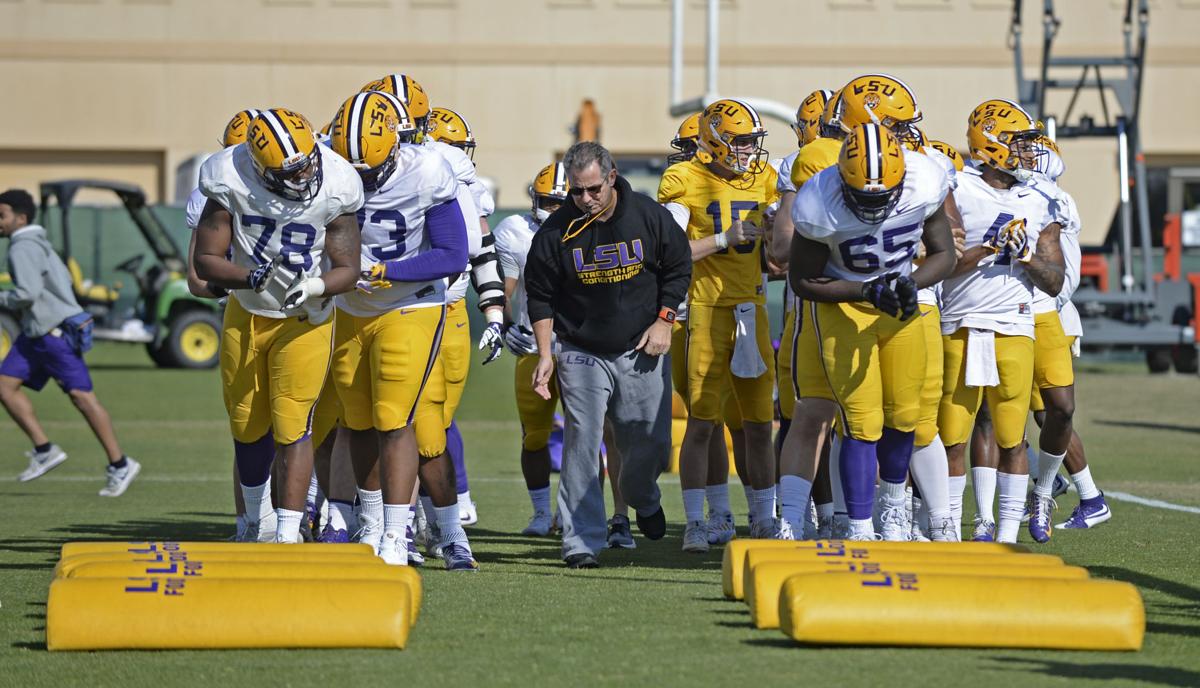 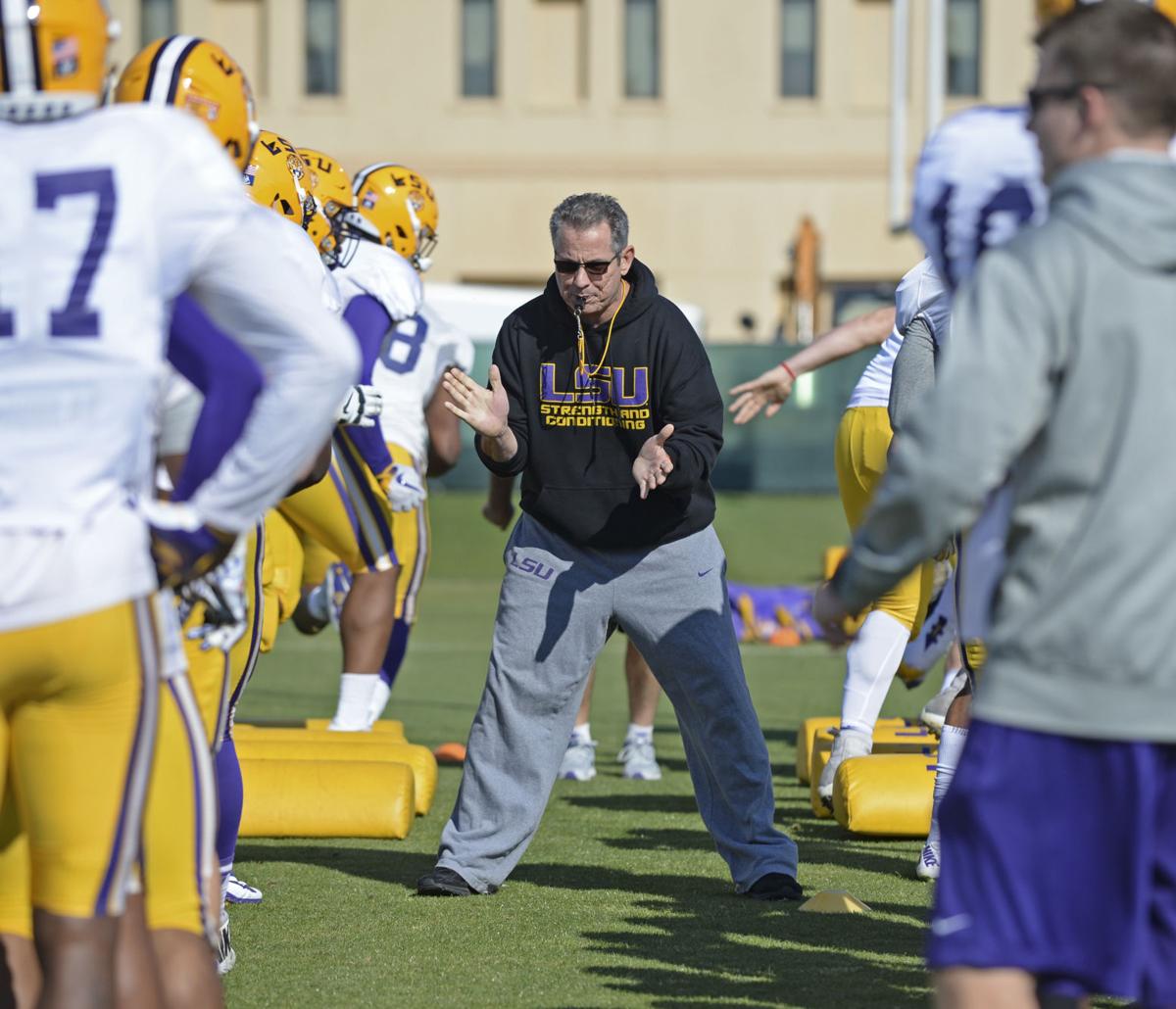 Inside LSU’s locker room two weeks ago at Vanderbilt, director of strength and conditioning Tommy Moffitt asked an assistant to hit him over the back with a folding chair. The Tigers had begun their stretch routine ahead of an 11 a.m. kickoff, but they had not played a regular-season game before noon in two years. Moffitt wanted to make sure the players were awake.

“It was kind of spontaneous,” Moffitt said.

Moffitt, 56, told assistant strength and conditioning coach Connor Neighbors to swing a folding chair across his back.

Neighbors reared back and slammed the chair against his boss. The players’ heads jolted. As stunned silence filled the room, Moffitt turned around.

The players burst into frenzied excitement as Neighbors swung the chair into Moffitt’s back another five or six times. Moffitt never dropped to the ground.

“We didn't even finish the stretch,” senior defensive lineman Breiden Fehoko said. “We just started going crazy in that locker room. We were ready to play.”

Moffitt has spent 19 years as LSU football’s director of strength and conditioning. Three head coaches have led the Tigers during that span, but Moffitt has remained a pillar of the program, one of the few constants during LSU’s most successful era.

As the Tigers have won two national titles and four Southeastern Conference championships since 2000, Moffitt has established himself as one of the most respected strength and conditioning coaches in college football. He has motivated players during pregame warmups and summer workouts, sometimes smashing a metal folding chair until it no longer functions as a chair, and provided calming encouragement.

Moffitt, who received a contract extension and raise this summer, has changed his methods based on new technology and research. He has abandoned ineffective drills. He has incorporated tracking systems into the weight room.

Even though he doesn’t coach a position, Moffitt has become an essential part of LSU’s operation. In college football, strength and conditioning coaches spend more time with players than position coaches because of NCAA rules limiting contact.

“You always know when you play them,” said Alabama coach Nick Saban, who hired Moffitt at LSU in 2000, “they're going to be physical and have a lot of mental toughness and discipline because of what they've gone through with him.”

The night before summer conditioning tests began in 2007, freshman offensive lineman T-Bob Hebert’s body filled with nerves. He graduated from a decent high school strength and conditioning program, but college football presented a different challenge. Workouts came with more intensity, time and psychological demands. The next morning, the team had to run 26 110-yard sprints. Moffitt was kind during recruitment, but now, he raised his voice as he set expectations for the freshmen.

Position groups had different time limits for the sprints, including 18 seconds for the heaviest linemen. The team ran 16 of them every Monday during the summer, and Hebert struggled. He didn’t have long strides. One leg was about an inch shorter than the other. He almost always ran extra for missing his times.

“T-Bob!” Moffitt yelled during one particularly slow run. “Your a--- is so wide I can spell Mississippi across the back.”

“That was one of the funniest things,” Hebert said, “anybody has ever said to me.”

Though Hebert struggled to meet his times that first summer, he respected Moffitt. He was late to one workout during his five-year career. He came to trust that if Moffitt instructed him to do something, it made him better.

If players missed their times during the final test of that summer in 2007, they had to run extra at 5 a.m. the day preseason camp started. When Hebert arrived that morning, Moffitt encouraged him. Moffitt, who once quoted Margaret Thatcher, the former Prime Minister of the United Kingdom, during sprints, tried to inspire players who felt defeated.

“He was a completely different person under those runs,” Hebert said. “He understands how to adapt to various situations.”

After graduating from Tennessee Tech in 1986, Moffitt began his coaching career at John Curtis. One day there, Moffitt watched a documentary about the Washington Redskins produced by NFL Films.

The movie showed a fan dressed as an Indian chief. When the unofficial mascot cheered for running back John Riggins — nicknamed “The Diesel” — he yelled “Womp! Womp!” and thrust his hand like a train conductor blowing a horn.

It stuck with Moffitt. He began yelling “Womp, Womp” at John Curtis, and Moffitt carried the guttural, beastial yell to jobs at Tennessee, Miami and then LSU. The chant has erupted in the locker room before games or when trains pass the practice fields.

During his junior year in 2010, offensive lineman Josh Dworaczyk felt frustrated during a series of 40-yard sprints. Moffitt demands perfection from some drills, and as the team ran, the strength coaches gave either a thumbs-up or thumbs-down. If one player earned a thumbs-down for any reason, the sprint didn’t count for the entire team.

Halfway through the workout, Dworaczyk sprinted 40 yards and kept going until he reached the indoor practice facility. He thought the players were running hard, and the constant barrage of downward thumbs forced him to a breaking point. He finished his set alone, supervised by an assistant.

After Dworaczyk left class a few hours later, his phone showed a missed call from Moffitt, who wanted to see him. Dworaczyk returned to the football operations building. He sat in Moffitt’s office.

“My job is to bring more out of you than you can bring out of yourself,” Moffitt explained to him. “You will never push yourself to be at the level that I'm going to push you to be at.”

Under Moffitt’s supervision, Dworaczyk ran twice as many sprints that afternoon, and he understood the reasons behind his coach's methods.

A few years later, after his career ended at LSU, Dworaczyk coached at his high school. During pregame warmups, he tried to emulate his former coach. As the players stretched before games, Dworaczyk asked them to visualize their plays. See themselves scoring touchdowns, Dworaczyk said. Envision the tackles.

“The whole time,” Dworaczyk said, “I was trying to do my best Tommy Moffitt of getting these guys mentally prepared to go out there and dominate.”

Earlier this week, Moffitt pulled out his phone inside LSU’s practice facility. He scrolled through his podcasts, showing the dozens he listens to during his free time. They discuss leadership, motivation and sports psychology.

Moffitt and his assistants gather as much information as possible that might help them prepare LSU's players. They read books. They watch videos. They pull ideas from social media. Some traditions haven’t changed, but Moffitt has tried to evolve with new technology.

LSU adopted GPS and speed tracking during practices a few years ago. This season, it installed tracking technology into its weight racks. As the Tigers lift weights, an automatic camera measures their speed and power. Nearby tablets display the results. LSU can then adjust weight to match the speed it wants players to reach.

LSU football's new power play: How strength AND speed is giving a true measure of Tigers

Moffitt has not kept every new advancement. Once, he tried to implement a new sled. The equipment forced players into a stance not used much in football, but Moffitt tried adapting it to LSU’s training.

One afternoon, Moffitt demonstrated how to use the sled. He held onto it, tugging at the equipment as he tried to explain how it worked. The sled did not cooperate.

“Finally,” Dworaczyk said, “he slings it 360 (degrees) like a discus thrower and lets this thing fly. The sled goes 15 yards in the air. Nobody was hurt, but needless to say, the sleds were no more.”

A locker room before a football game creates a mixture of fear, anger, excitement and anxiety. The players walk into the stadium through hundreds of people wishing them good luck and screaming their names. They have thought about the game all week, and in college football, every one matters for a championship. Pressure builds. The players file underneath the stadium, and as the stands fill, they can hear muted noise. It resembles, Hebert said, preparation for a gladiator fight.

“It gets whipped up into a fever pitch the closer you get,” Hebert said. “You know you're going out there for a four hour fist-fight.”

In this environment, Moffitt and the strength staff yell. They slap players' backs. They bang on shoulder pads. They hit one another. They adjust to the mood of the locker room. Sometimes they don’t do much, but if they believe the team needs more energy, they create it.

Moffitt used to smash a helmet from an opposing team before big games, throwing them at whiteboards or sometimes a brick wall. The helmets “exploded,” Dworaczyk said. Replacing shattered helmets became too expensive, so a few years ago, Moffitt switched to metal folding chairs. He puts the sticker of an opposing team on the chair, then Moffitt swings it against walls and the ground.

“You hear that chair and you're getting dressed,” junior outside linebacker Andre Anthony said, “you know what time it is.”

Before LSU played at Texas this year, Moffitt swung a chair against a locker room wall. People kicked the chair. Others jumped on it. The team left it in a crumpled pile. One leg was broken, and the back was bent. Dents riddled the metal. Then they won on the road against a top 10 team.

“I kind of black out,” Moffitt said. “I just pick a time to start throwing it. Sometimes, I do it the whole warmup, and sometimes I do it right before we go out. I get overtaken by the spirit, you know?”

Throughout the game, players hear Moffitt screaming from the sideline — he has sometimes needed an assistant to lead stretches on Monday after a game — but when the players need soft encouragement, he provides it, lowering his voice.

As the fourth quarter begins, Moffitt and the rest of the strength staff raise their hands with four fingers up, a symbol of the fourth quarter mentality they have tried to create during summer workouts, back when they were the only ones interacting with the players, pushing them through drills designed to make them better during the season.

“I cannot offer enough praise for that man,” Hebert said. “I find it hard to separate my bias when talking about him, because he's my favorite coach that I've ever had.”

When LSU had its open date last week, the Tigers took three days off from practice or lifts. Moffitt spent his break working on house projects, waiting until the team met again and he resumed the job he loves.