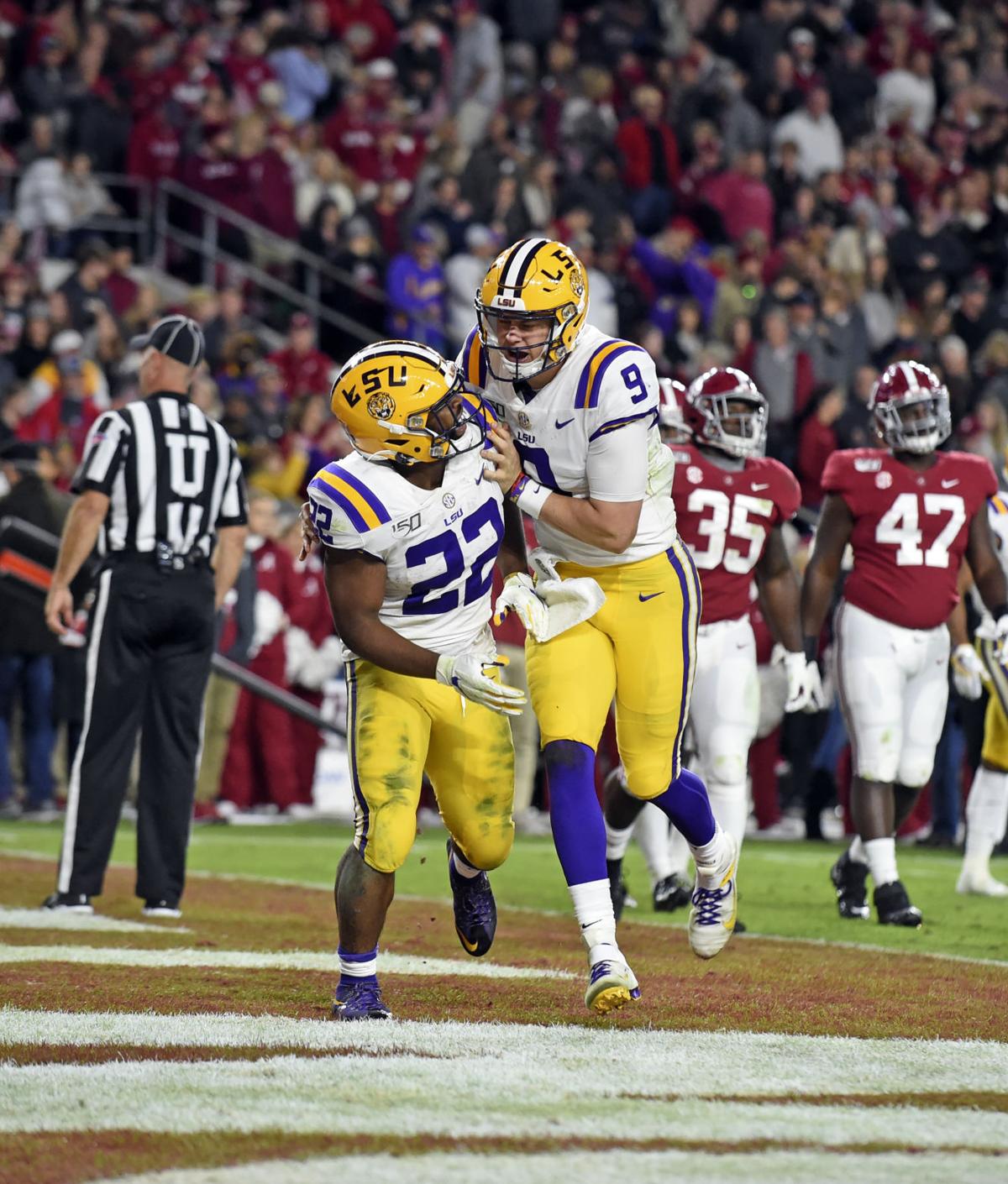 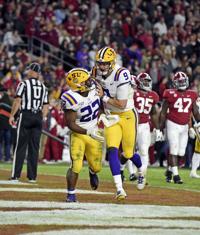 LSU quarterback Joe Burrow (9) celebrates with LSU running back Clyde Edwards-Helaire (22) after Edwards-Helaire scored late in the second half of LSU's 46-41 win over Alabama, Saturday, November 9, 2019, at Alabama's Bryant-Denny Stadium in Tuscaloosa, Ala. 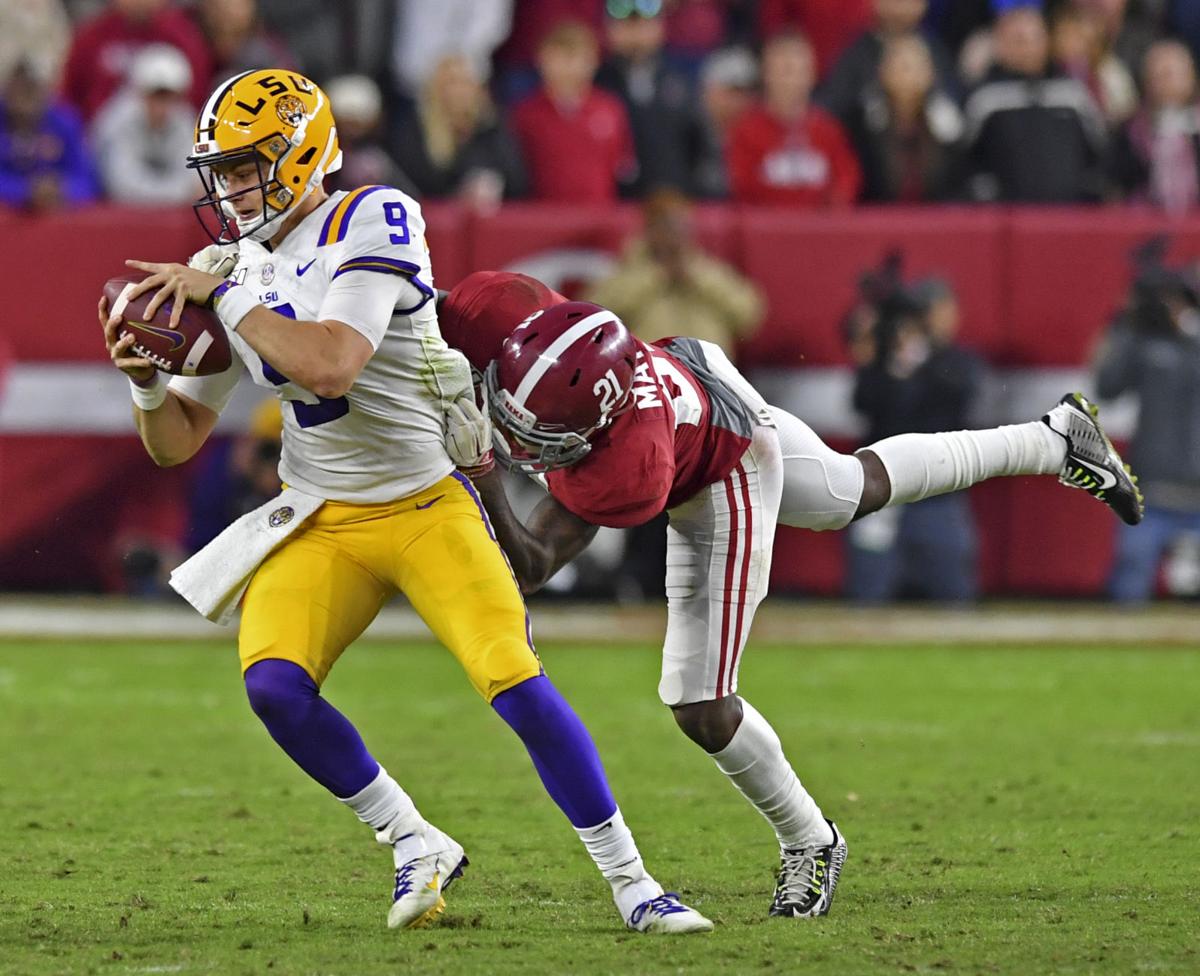 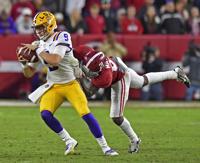 LSU quarterback Joe Burrow (9) slips the sack by Alabama defensive back Jared Mayden (21) in the second half of LSU's 46-41 win over Alabama, Saturday, November 9, 2019, at Alabama's Bryant-Denny Stadium in Tuscaloosa, Ala. 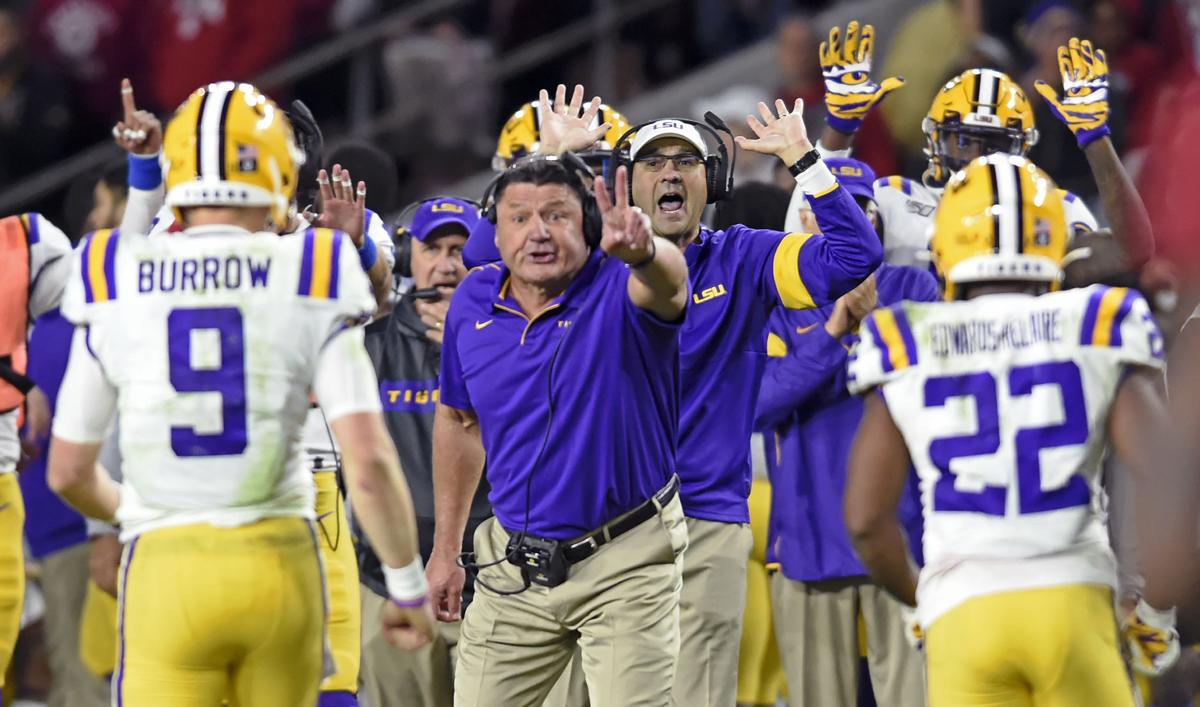 LSU head coach Ed Orgeron signals to go for two points after the touchdown during the second half of LSU's football game against Alabama at Bryant-Denny Stadium Saturday Nov. 9, 2019, in Tuscaloosa, Ala. LSU won 46-41. 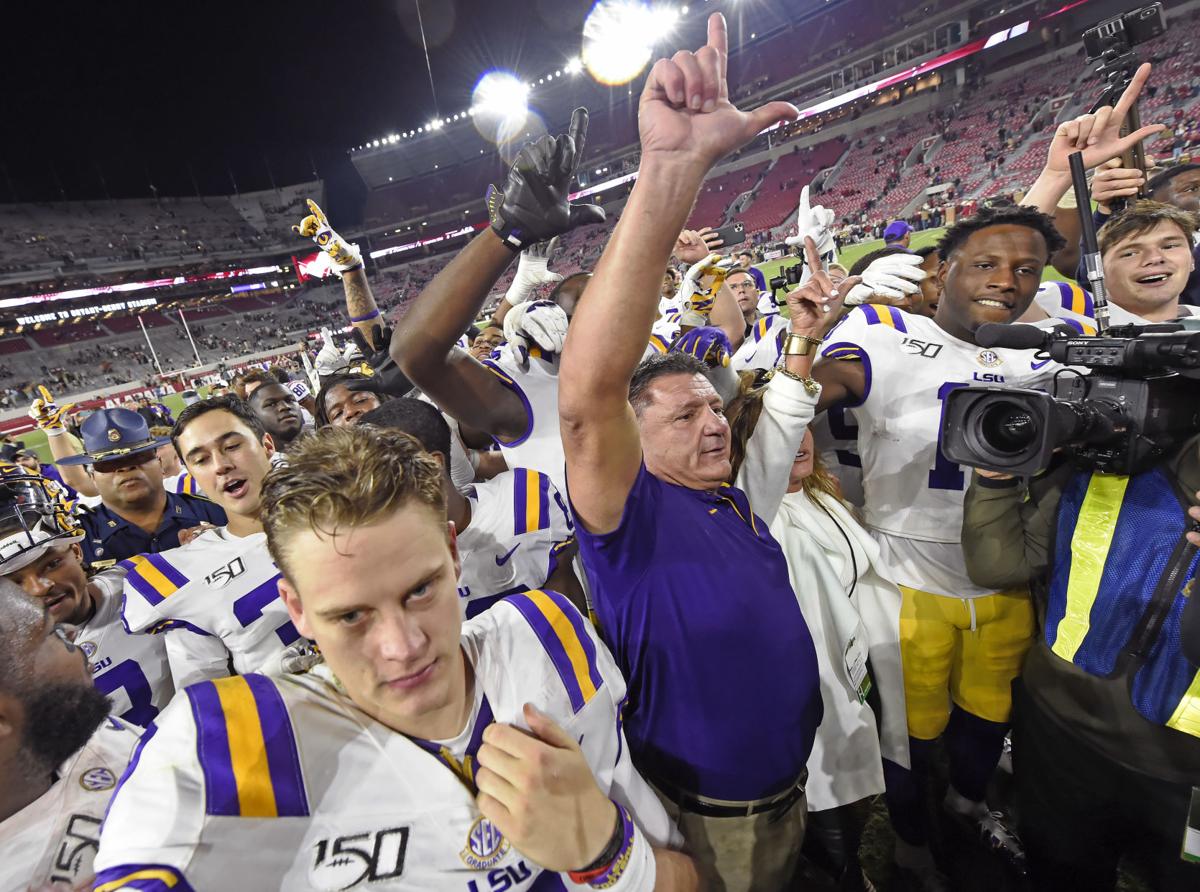 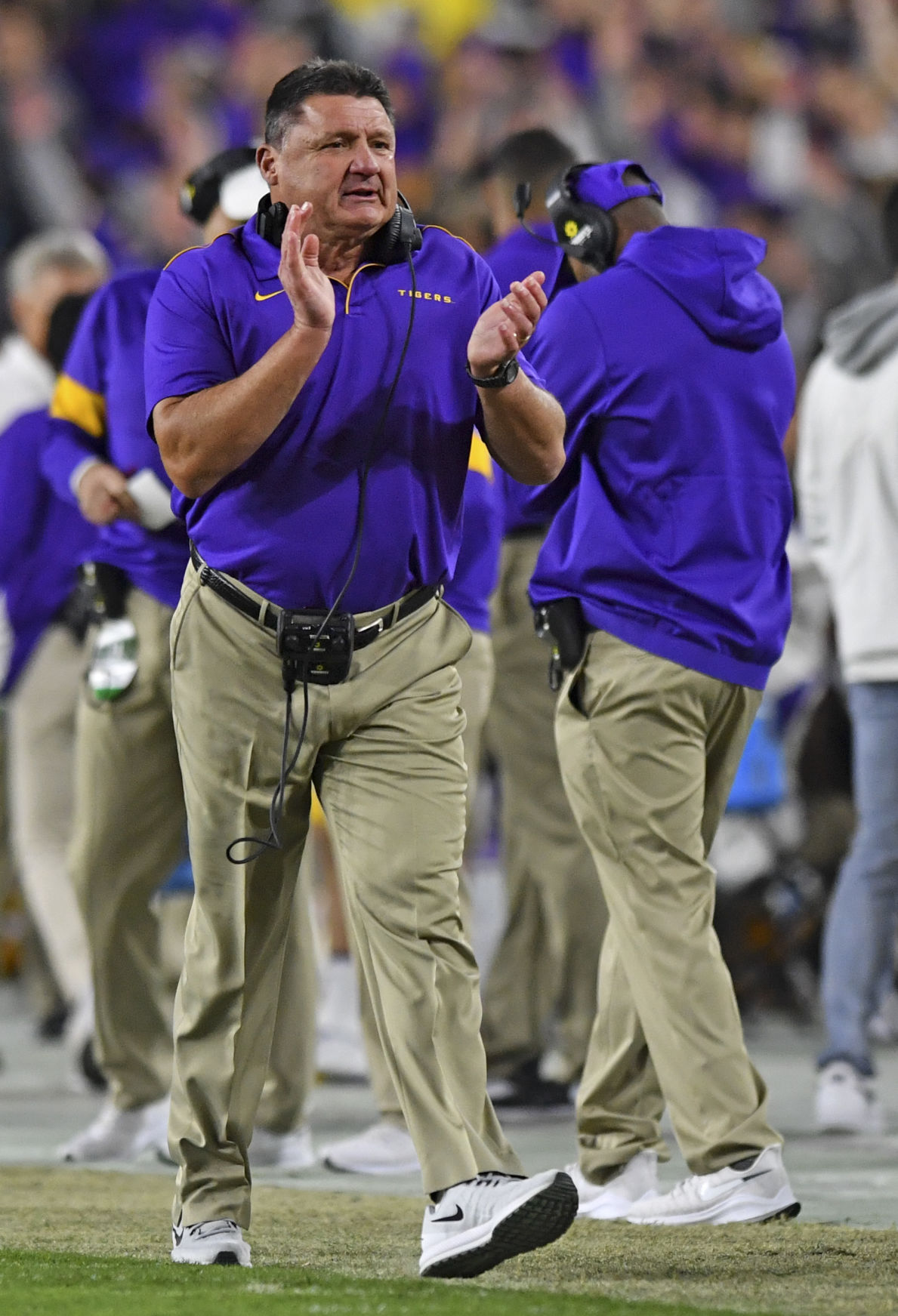 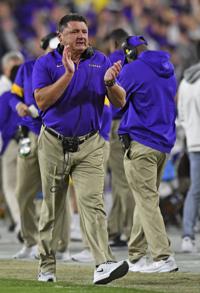 LSU head coach Ed Orgeron coaches in the second half of LSU's 46-41 win over Alabama, Saturday, November 9, 2019, at Alabama's Bryant-Denny Stadium in Tuscaloosa, Ala.

LSU quarterback Joe Burrow (9) celebrates with LSU running back Clyde Edwards-Helaire (22) after Edwards-Helaire scored late in the second half of LSU's 46-41 win over Alabama, Saturday, November 9, 2019, at Alabama's Bryant-Denny Stadium in Tuscaloosa, Ala.

LSU quarterback Joe Burrow (9) slips the sack by Alabama defensive back Jared Mayden (21) in the second half of LSU's 46-41 win over Alabama, Saturday, November 9, 2019, at Alabama's Bryant-Denny Stadium in Tuscaloosa, Ala.

TUSCALOOSA, Ala. — The LSU football team emerged from the airplane Saturday night and saw the welcome party, the line of Tiger fans pressed against the chain-link fence at Baton Rouge Metropolitan Airport, screaming like bobby-soxers, celebrating the program's biggest win in nearly a decade.

Joe Burrow, the quarterback who all but secured the Heisman Trophy in LSU's historic 46-41 win over Alabama, ran the length of the fence, left hand grazing through the chains, a sports hero and the state's faithful connecting for a moment in an oh-so-special time.

Louisiana I love you

Not as much, perhaps, as Louisiana loves him.

No, the dragon has been slain and Burrow is the knight who came from Ohio, the graduate-transfer quarterback who championed LSU to its first win over Alabama since 2011.

"This is why I decided to transfer," Burrow said. "I wanted to play. I knew I could play on this stage."

The 6-foot-4, 216-pound senior was at the height of his powers in Bryant-Denny Stadium, throwing for 393 yards and three touchdowns, breaking through tackles to complete downfield passes and converting three crucial third downs on a third-quarter touchdown drive when the Tide had pulled within a single score.

"He's the G.O.A.T.," center Lloyd Cushenberry said. "That's a defining moment. We're going to remember that for the rest of our lives."

So will Clyde Edwards-Helaire, the Baton Rouge native and Catholic High graduate, who totaled 181 offensive yards (104 rushing, 77 receiving) and scored three touchdowns on the ground and another as a receiver.

At the game's end, he shared a long embrace over the field's railings with his father, head buried into the shoulder of his father's gold sweatshirt.

"That's the most emotion I've showed in a game since playground park ball," Edwards-Helaire said.

LSU and assistant football coach Joe Brady are working on details for a new contract, according to a source familiar with the situation.

The emotion is still flowing, influencing actions of unexpected good will.

When LSU coach Ed Orgeron returned to his home, there was a message made up of yard signs in big block letters: "We love you Coach O."

The 58-year-old Larose native was in tears following Saturday night's victory, embracing his wife, Kelly, and son, Cody, during a postgame interview — a family who has seen its patriarch endure failure and ridicule and doubt.

Few stones will be cast by those who witnessed Orgeron's full-time hiring back in 2016, when there were widespread questions whether the man who fell hard in his first head coaching gig at Ole Miss would be the one who could return LSU to greatness.

LSU is now 9-3 against top 10 teams under Orgeron. The first win against a top 10 team this season came against Texas and the head coach, Tom Herman, who many LSU fans wanted.

But beating Nick Saban is far sweeter. Orgeron will be remembered as the LSU head coach who stopped the losing streak to the Tide, and that's a feat that transcends even the most gregarious of Cajun personalities.

The records keep lining up and falling for Joe Burrow, who knocked down two program marks and had a hand in another team record in LSU's defea…

No Southeastern Conference game means more to LSU. Orgeron has acknowledged that in the past, saying, "We’ve got to beat them to get where we want to go. That’s the fact."

Orgeron attended LSU briefly in 1979. He's aware that LSU-Alabama is the rivalry that eventually cost Charles McClendon his job that season due to nine straight losses to the Crimson Tide.

"I might not have to go to the 7-Eleven now and get me a Monster or a Red Bull and they won't have to tell me, 'Coach O, you've gotta beat those guys,' " Orgeron said Saturday night. "I'll tell 'em, 'I beat 'em. Did you watch the game?' "

Saban explains 'mistake' that gifted LSU two TDs in 20 seconds: 'I take all the blame'

It took just 20 seconds for LSU to grow its lead from six points to 20 points.

It's all but certain they did. It'll be hard pressed to find an LSU fan who didn't watch the Tigers score more points than any opponent had ever scored in regulation in Tuscaloosa.

LSU's record-breaking offense — the one Orgeron hired assistant Joe Brady to construct with coordinator Steve Ensminger — lived up to Burrow's summer projection that the Tigers would be scoring, 40, 50, 60 points per game.

"I told you," Burrow said. "Nobody believed me. I told you."

LSU has captured Louisiana's belief while captivating the football-watching nation, demanding attention that the Tigers have a Heisman quarterback who is leading a team that seems hell bent for an SEC title and its first berth in the College Football Playoff.

But, oh, how cloudy that playoff picture has become. LSU, Ohio State and Clemson — all undefeated teams in control of their conferences — would likely make up the first three spots if the season ended today.

With Penn State's loss to undefeated Minnesota, anything is possible. An undefeated Baylor? A one-loss Oklahoma or Oregon? Dare anyone say it: a throwback to 2011, with LSU having to play Alabama again for a shot at a national championship?

Orgeron's not discounting the possibility of having to play the Tide again.

"Sure, they're a good team," Orgeron said. "Yeah. There's no telling what's going to happen down the road, but sure."

There's plenty of road ahead for LSU.

There's Ole Miss on Saturday. Arkansas after that. Texas A&M to finish the regular season, and if it comes down to it, whoever might come out of the SEC East in the conference title game in Atlanta.

Alabama is LSU's most meaningful win yet this season; but there's still more yet to come.

Win over Alabama validation for LSU, Ed Orgeron; 'I wonder what they're going to say next'

Peek at LSU vs. Alabama film: How LSU put pressure on Tua and finally beat the Tide