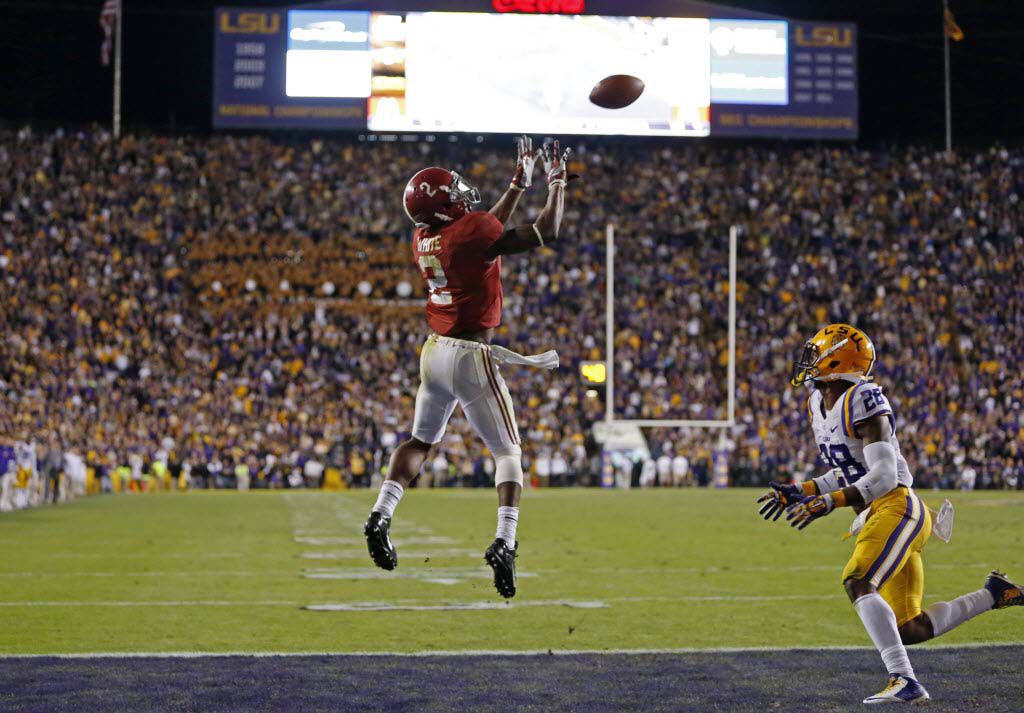 Nov. 15, 2014 -- Alabama 20, LSU 13 (OT) … Alabama quarterback Blake Sims passed 6 yards to DeAndrew White on second-and-goal for the go-ahead touchdown to lift the No. 5 Crimson Tide to a 20-13 overtime victory over No. 15 LSU in Tiger Stadium. Alabama (8-1, 5-1) overcame a three-point deficit in the final minute of regulation to force overtime on Ryan Griffith’s 27-yard field goal with 3 seconds showing. 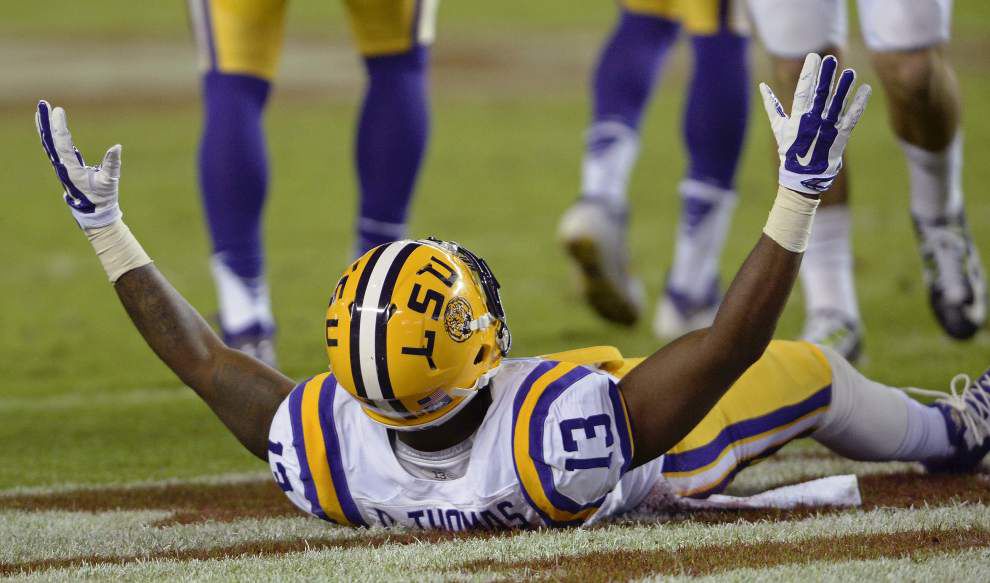 Advocate staff photo by BILL FEIG -- LSU defensive back Dwayne Thomas (13) throws his arms up questioning a "no call" on the play during the first half Saturday, Nov. 7, 2015, in Tuscaloosa. Alabama won 30-16. 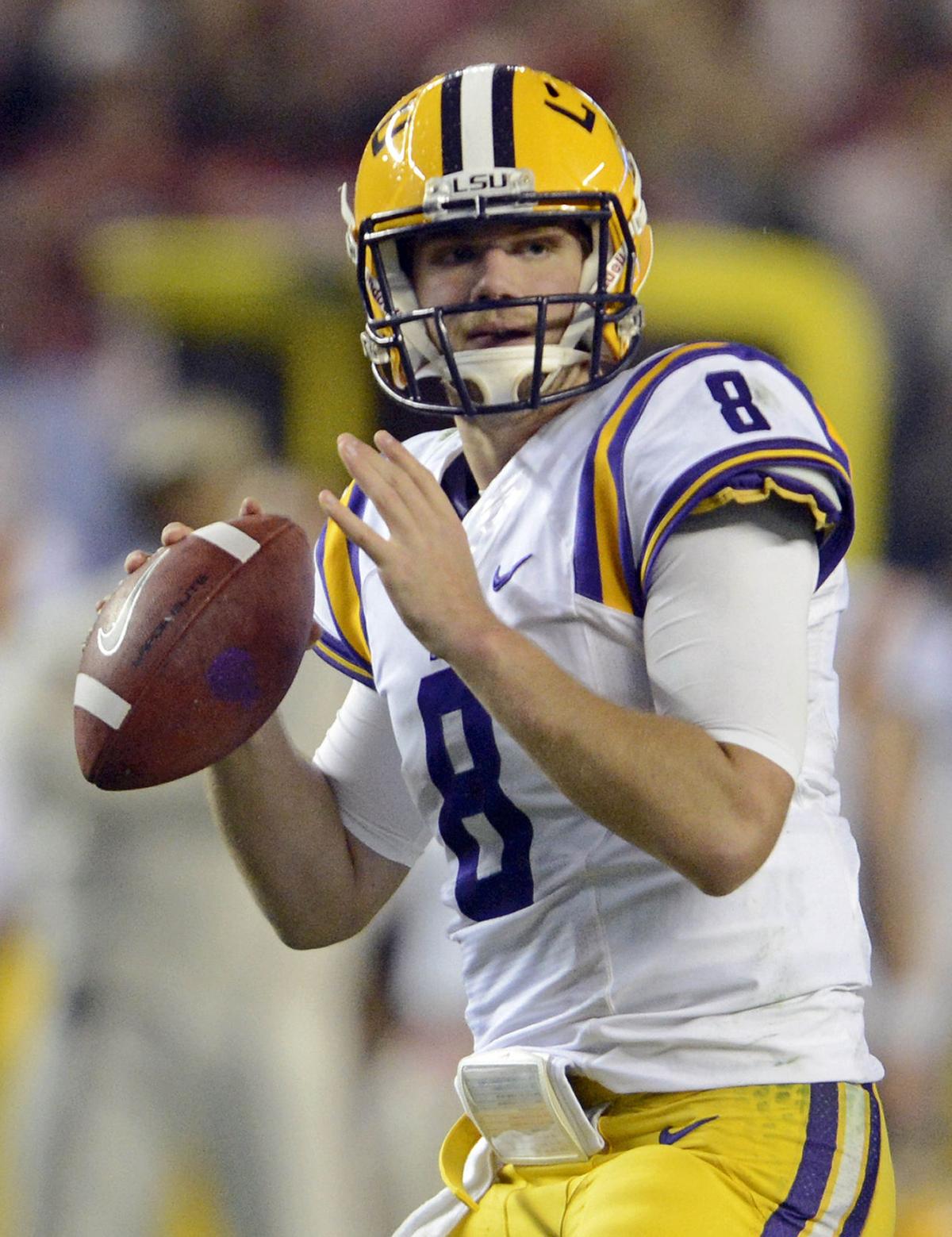 Advocate staff photo by BILL FEIG -- LSU quarterback Zach Mettenberger (8) looks for a receiver on 4th down during the second half at Bryant-Denny Stadium. Alabama won 38-17.

Nov. 15, 2014 -- Alabama 20, LSU 13 (OT) … Alabama quarterback Blake Sims passed 6 yards to DeAndrew White on second-and-goal for the go-ahead touchdown to lift the No. 5 Crimson Tide to a 20-13 overtime victory over No. 15 LSU in Tiger Stadium. Alabama (8-1, 5-1) overcame a three-point deficit in the final minute of regulation to force overtime on Ryan Griffith’s 27-yard field goal with 3 seconds showing.

Advocate staff photo by BILL FEIG -- LSU defensive back Dwayne Thomas (13) throws his arms up questioning a "no call" on the play during the first half Saturday, Nov. 7, 2015, in Tuscaloosa. Alabama won 30-16.

Dwayne Thomas is fired up with good reason.

The LSU defensive back is one of four players on the team who were a member of the squads in 2012 and 2014 that lost to rival Alabama at the last second at home — a pair of just misses in a five-game losing streak to coach Nick Saban’s crew.

Thomas is entering this year’s clash against the Crimson Tide with a burning desire to win, and he’s confident about it, too.

During this off week, the streak is burning in Baton Rouge. The five-game skid is seared in the minds of a group of players who are now battling for an interim head coach. They’re brimming with confidence, too, in the midst of their “new season,” as they call it.

The 19th-ranked Tigers (5-2, 3-1 Southeastern Conference) are 3-0 under Ed Orgeron heading into the Nov. 5 game against Alabama (8-0, 5-0). Ten days before the meeting in Tiger Stadium, Thomas, a fifth-year senior safety, handed the Tide motivational material to extend its longest winning streak over LSU since 1981.

Sure, Bama players might hang this in their lockers. He doesn't care.

“We put stuff up, too. If that helps motivate them, so be it,” Thomas said. “We know what motivates us. We want that No. 1 next to their (name).”

It’ll be a tough one.

Bama is a 10-point favorite in most betting circles, and the Tide thrashed LSU just a year ago — a 30-16 beatdown in Tuscaloosa and another setback in this nightmarish half-decade.

LSU hasn’t beat Bama since a 9-6 overtime win in Tuscaloosa during the 2011 regular season, a game dubbed “The Game of the Century.” The Tigers have been outscored 130-63 during those five games, and they averaged just 250 yards an outing against the Tide over the stretch.

Old friends, Orgeron & Kiffin put aside their weekly calls ahead of LSU-Bama

Saban’s club stormed back to win games in Tiger Stadium in 2012 and 2014. You don’t have to remind LSU cornerback Tre’Davious White. He was on the field when Bama drove 55 yards on nine plays in 50 seconds to tie the game with a field goal, and then win in overtime two years ago.

“It was probably the first time I cried after losing a game in a while,” White said.

“I remember we gave the game away,” said defensive end Lewis Neal, watching from the sideline as the Tide drove down to lock the score at 13.

No one on LSU’s current team has beaten Alabama. Thomas, outside linebacker Corey Thompson, kicker Colby Delahoussaye and receiver Travin Dural are the only ones left who were on the team in 2012.

Bama stunned another Tiger Stadium crowd that night. AJ McCarron connected on a 28-yard screen pass to running back T.J. Yeldon with 51 seconds left for a touchdown that lifted the Tide over the Tigers. It came 10 months after the berth of the skid, the 21-0 defeat in the BCS national title game in New Orleans.

“I was being recruited then,” White said of the 2012 clash in Tiger Stadium. “I was here. They hit the running back out of the backfield.”

Thomas was rotating into that game with other defensive backs, trying to slow Bama on that final-minute march.

“They won with a screen at the end,” he said. “I remember like the back of my hand. Heartbreaking for us.”

In the 2014 game, Delahoussaye made a 39-yard field goal with 50 seconds left. Trent Domingue kicked the ensuing kickoff out of bounds, giving Alabama field position at its own 35-yard line.

“We don’t kick that ball out of bounds, we win that game also,” Thomas said.

Rabalais: Orgeron off to historic start; there's a key to his appeal

Is this the year? Thomas says so. He’s far from the only confident one on LSU’s team. Maybe it’s the Tide’s 48-43 win over Ole Miss that has their spirits so high. Or that LSU's defense has allowed eight touchdowns in seven games, the fewest nationally.

On Tuesday while speaking in New Orleans, Orgeron said, “Ole Miss put up 43 on them. They’re not invincible.”

Thomas hasn’t ever won either. That will change, he said.

“We’re not going to be the only senior class not to beat Alabama,” Thomas said. “I feel confident in this game. We know we have our shot. We need to get back and put banners on these walls.”

LSU has not beaten Alabama in five years, dating back to the 9-6 overtime win in Tuscaloosa in 2011. The Tide’s string of five consecutive victories began with the 21-0 win in the BCS national title game.

The Crimson Tide has dominated in cumulative statistics over those five games.

Ed Orgeron’s transformation since he led the Ole Miss program in the mid-2000s has been well-publicized.

Tighten up: Having shut down Ole Miss' Evan Engram, LSU turns to another top tight end in Alabama's O.J. Howard

Between breaking down tape and implementing a game plan, LSU tight end Foster Moreau doesn’t have much time to observe the other tight ends in…

If Leonard Fournette and Toby Weathersby weren’t close before, perhaps they became closer sitting in LSU’s training room as they received trea…