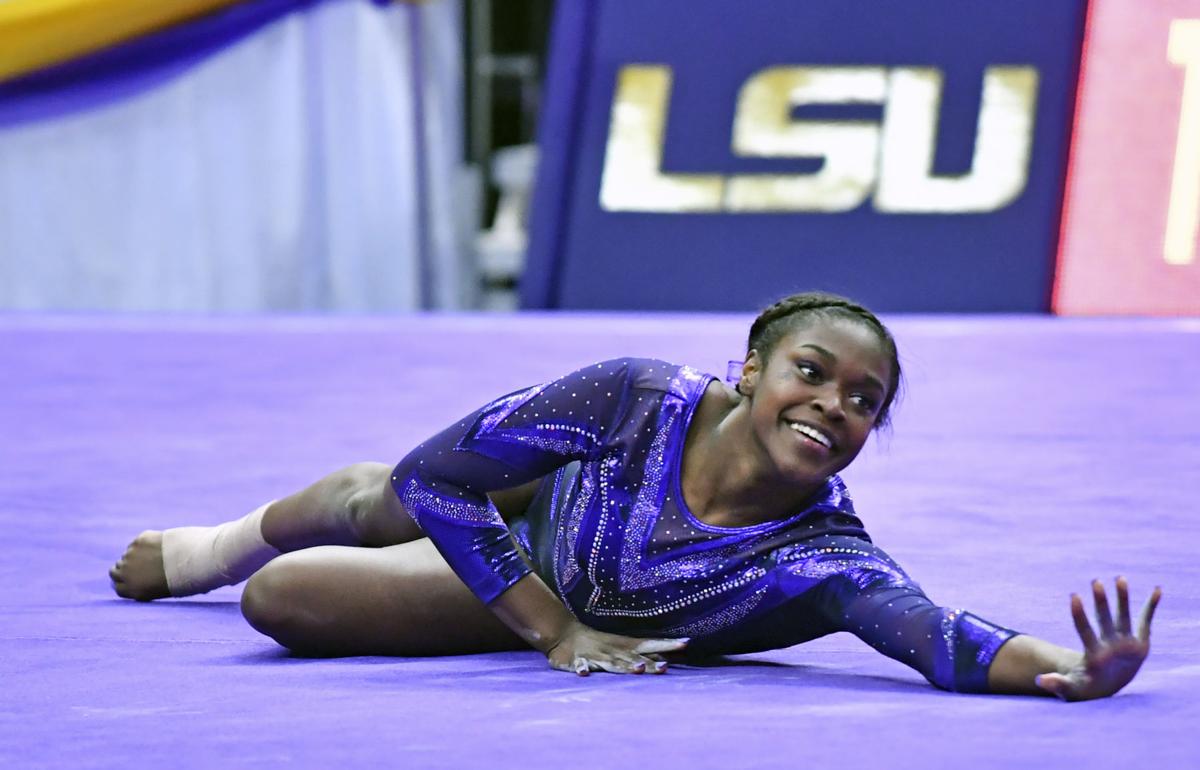 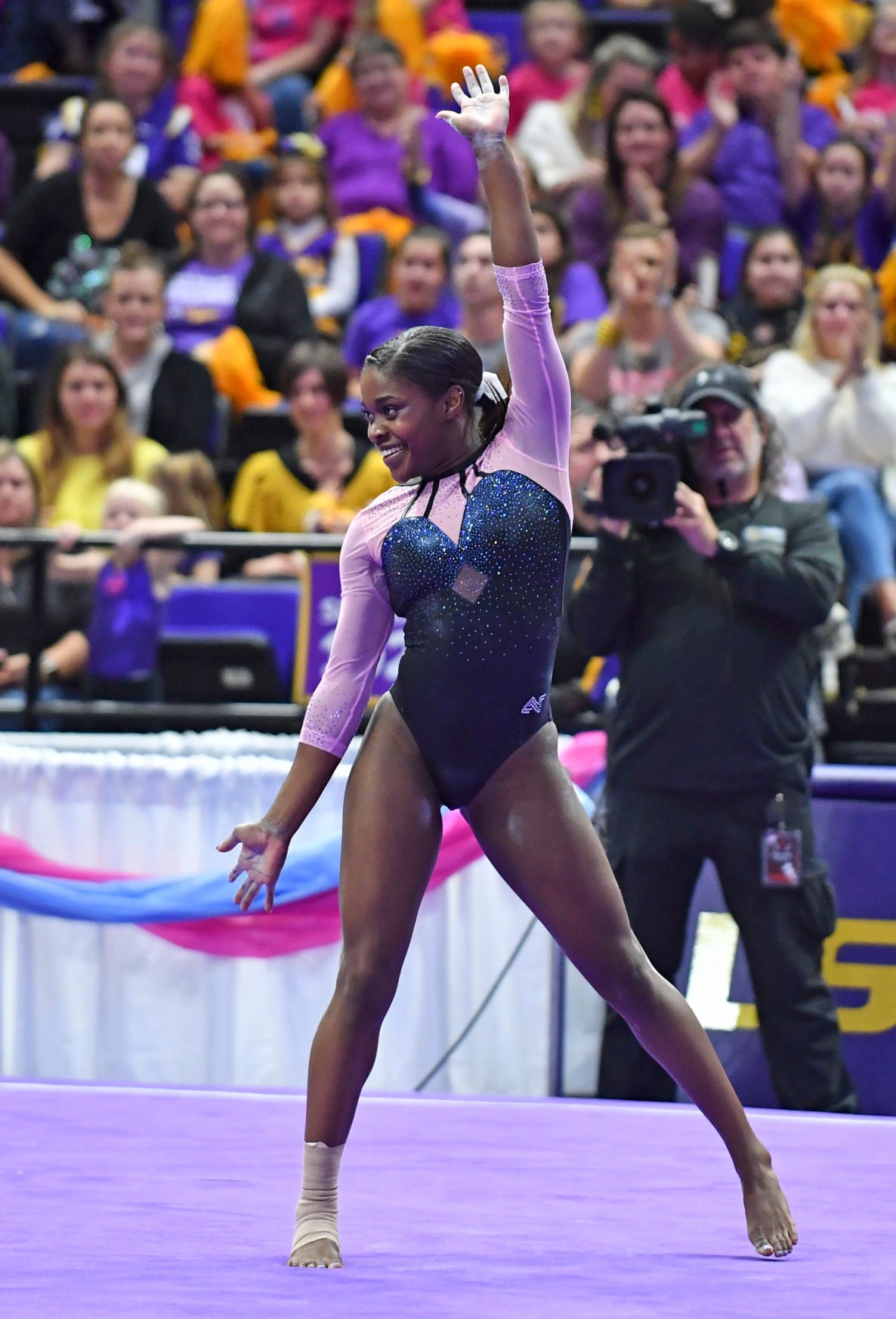 After years of being dominated by veterans like Sarah Finnegan, Lexie Priessman and McKenna Kelley, the LSU gymnastics program is in the throes of a full-fledged youth movement.

No one embodies that movement — or is more youthful — than freshman Kiya Johnson.

Technically, Johnson should be a senior back at Coppell High School in Dallas, still training at the Texas Dreams Gymnastics club that produced gymnasts like former LSU floor sensation Lloimincia Hall and current Tigers junior Reagan Campbell. She won’t turn 18 until Feb. 27.

But Johnson, eager to begin her collegiate career, graduated a year early and rushed to compete at LSU.

Without a doubt, LSU is fortunate she did.

In three meets, Johnson has already won seven individual titles. Last Friday against Auburn, she brought the crowd of more than 11,000 in the Pete Maravich Assembly Center to its feet as she won on floor with a 9.975 in the anchor spot (sixth and last in the rotation) to clinch her second all-around title (39.600). Earlier in the night she also won on beam (9.90) and had a career high on vault (9.925), the entire effort helping her earn SEC gymnast of the week honors.

“The sky’s the limit” for Johnson, said LSU co-head coach D-D Breaux, whose No. 8-ranked Tigers travel to face No. 2 Florida at 6:30 p.m. Friday. The match will be televised ESPN2. “She would be that great international kid if she didn’t hurt her leg.”

An Achilles’ tendon tear in June 2016 ended what hopes of international and Olympic glory Johnson may have had. It was a year and a half before she would start competing again in 2018, this time downshifting from elite to Level 10 gymnastics as she began ramping up for her collegiate career.

Johnson first visited LSU when she was 14, right after her Achilles’ injury. She always felt a bond with LSU and its coaches but initially committed to Georgia.

“We really wanted her, but she had an injury and we just couldn’t pull the trigger on her to make that firm commitment,” Breaux said. “Georgia came in and swooped her up but she stayed in touch with us during the process.”

When Georgia coach Dana Durante (mother of LSU junior Sami Durante) was fired in 2017, Johnson’s view of UGA’s program changed. LSU co-head coach Jay Clark, then an LSU assistant coach, never gave up the chase in Johnson’s recruitment, and she switched her pledge to the Tigers.

“I don’t know why but I committed to Georgia, but the whole coaching situation changed,” Johnson said. “Then I contacted Jay again. He kept in contact with my mom a lot.”

“We got to her junior year and she came to camp and was amazing,” Breaux said. “She graduated a year early.

“Jay is a master (recruiter). He stays in touch. Stays on top of it. That’s what he did with her. The relationship, the bond, was really strong. She wanted to come here and the opportunity presented itself.”

With big holes opening in the LSU lineup with the departures of seniors Finnegan, Priessman, Kelley and Julianna Cannamela, the opportunity to compete presented itself in an urgent way for the Tigers. Johnson joined senior Kennedi Edney as LSU’s only all-arounders to date (competing on vault, bars, beam and floor) and against Auburn she emerged in the anchor role on vault and floor.

“It means a lot for me to be in the anchor spot,” Johnson said. “It’s pressure knowing I have to hit, but it means a lot.”

“We recruited her as an all-arounder,” Breaux said. “We knew what she could do.

“Would we like to pull her out of an event from time to time? Yeah, that would be great, because she does get tired. She has a long recovery weekend. However, she’s our highest-scoring athlete at this time and we’ve got to get the scores wherever we can.”

The meet at Florida will be LSU’s fourth in as many weeks to start the season. Johnson said in a typical month in her high school days she would only compete once a month and might not have her fourth meet until the state high school competition.

“It hasn’t been difficult, but it has been really different,” Johnson said. “The coaches try to help us do light numbers at the beginning of the week. The training is really different, and we focus on treatment and resting outside the gym so we don’t tire ourselves out.”

Though Johnson has never competed so much in such a short amount of time, she isn’t asking for less responsibility, especially going into a big meet like the one at Florida.

“Just from the couple of meets we’ve had my confidence has grown being put in pressure situations,” she said.

Youthful, yes, but eager for the chance to compete in a big way.

No. 7 LSU overcomes fall on beam for SEC gymnastics win over Auburn in PMAC

After counting one of two falls in a dangerously unbalanced beam routine, LSU gave Auburn the opportunity to pull a second-straight upset.

@-At Fort Worth, Texas

It was a night of great performances, an amazing milestone and a couple of stinging disappointments for the No. 8-ranked LSU gymnastics team F…