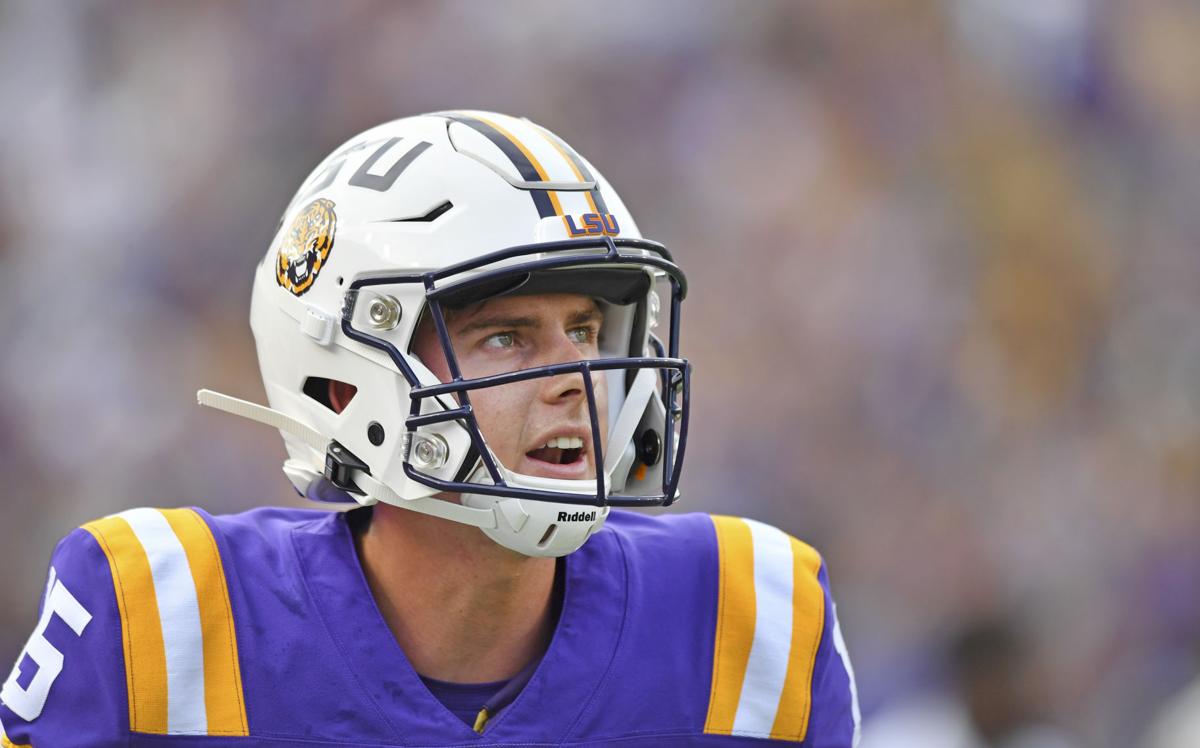 LSU quarterback Myles Brennan (15) on the field before kickoff between LSU and Northwestern State, Saturday, September 14, 2019, on LSU's campus in Baton Rouge, La. 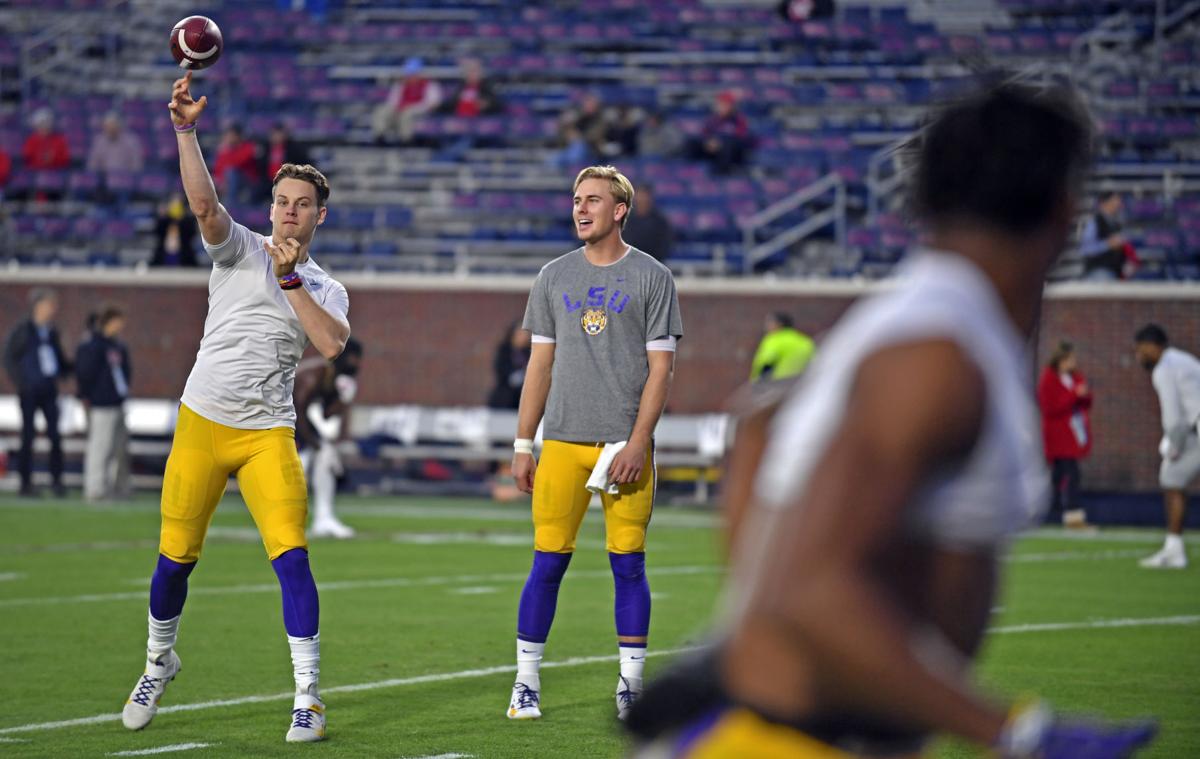 LSU quarterback Joe Burrow (9) warms up on the field as backup quarterback Myles Brennan looks on before kickoff between LSU and Ole Miss, Saturday, November 16, 2019, at Vaught-Hemingway Stadium in Oxford, Miss.

As Myles Brennan prepares to run into Tiger Stadium as LSU's starting quarterback for the first time this weekend, questions about the Heisman-sized shoes he's stepping into find him early and often.

But the junior quarterback isn't focused on breaking records or trying to match Joe Burrow's outsized legacy as the Tigers face Mississippi State in their season-opener, he said Tuesday. Brennan's focused on the here and now.

"Joe came in here and he did his thing, and what he did was great. But, you know, it's my turn now to do my thing and write my own story," he said. "I learned a lot from Joe and I took things that he did well and I used them to better myself. But the past is the past and I'm looking forward to being able to play the season."

Brennan first arrived in Baton Rouge before the 2017 season as a highly touted prospect with the potential to start in his freshman season, but he came out on the short end of a quarterback competition with transfer Danny Etling.

A year later was much of the same, with Brennan locked in a battle for the starting job with Burrow after his transfer from Ohio State. Two years later in his fourth season with the Tigers, the job belongs to the Mississippi native in a season thrown into flux by the coronavirus pandemic.

But despite not being listed as the starter, it's far from unchartered territory for Brennan who was featured in mop-up duty in several games during LSU's 2019 title run.

As a sophomore Brennan saw action in eight games, completing 24 of 40 passes for 353 yards and a touchdown.

Myles Brennan had to get creative -- and pick up a chainsaw -- during quarantine this offseason, but in the end LSU's quarterback hit his mark…

"It's just going to be another game," Brennan said. "You know, this is my fourth season here I've run out into Tiger Stadium a good number of times and just because I'm the starter, you know, nothing's gonna change. I'm still preparing like I would have prepared the past three years as if I was the starter … now I'm gonna be able to be that guy that runs out in the field first”

"It's awesome. I mean my parents and my brothers and my family, you know that's really been you know my biggest support staff up until this point. They've sacrificed a lot and I wouldn't be here without them obviously. But you know they travel to every single game, home and away, and so they're always there supporting me. So you know this is, it's exciting for me to be able to give this back to them because this is what they've been waiting for. And it's obviously what I've been waiting for as well, but you know to be able to go out there and perform for them and … make them feel proud is what I'm most looking forward."

Rabalais: LSU not abandoning the pass, but Ed Orgeron hints running game may make a comeback

Ed Orgeron was dropping hints Monday during his first weekly video news conference. Hints about the LSU Tigers’ offense and what it may look l…

EXPECTATIONS FOR SUCH AN INEXPERIENCED ROSTER AFTER HEAVY TURNOVER

“I mean, we've just got to take it a week at a time. ... We have a bunch of fresh faces, a lot of guys that as coach likes to say ‘haven't been in the fire’ yet. And it's gonna, you know we're gonna have to learn and develop week by week.

“Ja’Marr [Chase] did his thing and, you know, we didn't really blink with that. He made that decision for himself, and we still have to stay focused and get ready to play a game coming this Saturday. As an offense and receiving core and running backs the biggest thing that we really focused was just getting our timing down. … Every day since camp started after practice we stay 15, 20, even sometimes 30 minutes and just go over routes that we maybe missed during practice or routes that … we need to work on timing-wise or just talk through things.

"So I think that's really been beneficial since we've lost spring and this offseason was is a lot different than what it usually is.”

IMPRESSIONS FROM THE YOUNG OFFENSIVE LINE?

"I feel very comfortable with those guys you know they come they work really hard. Coach [James] Cregg gets them ready every single day and they're ready. You know, I don't think there is many weaknesses with that with that group. They're always ready to learn and I'm excited to see how they do on Saturday”

Ed Orgeron thinks Kayshon Boutte is 'locked in' as LSU's third receiver; 'the next great one'

The answer to the long-asked question of the offseason — What will this year's offense look like? — is reaching its final form.