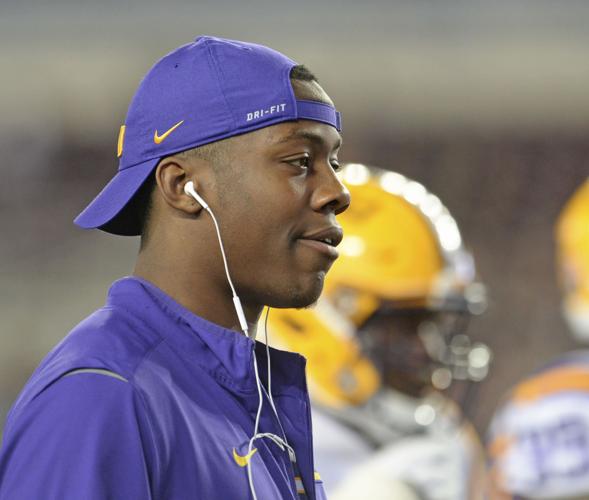 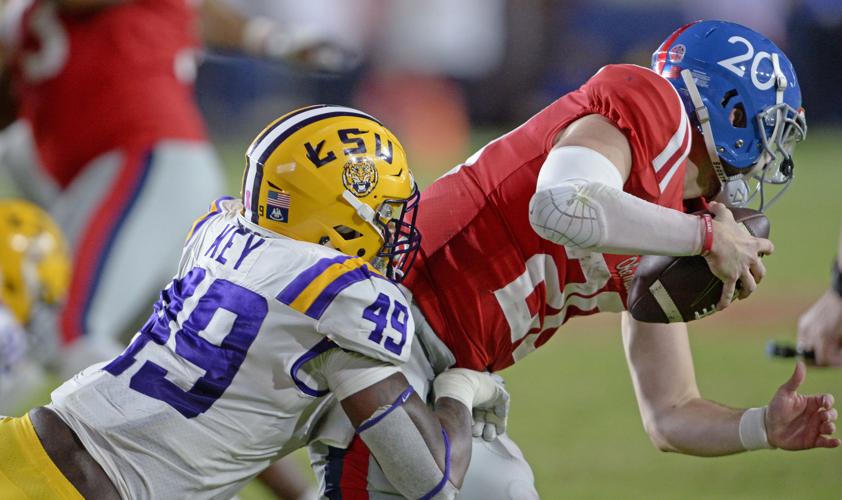 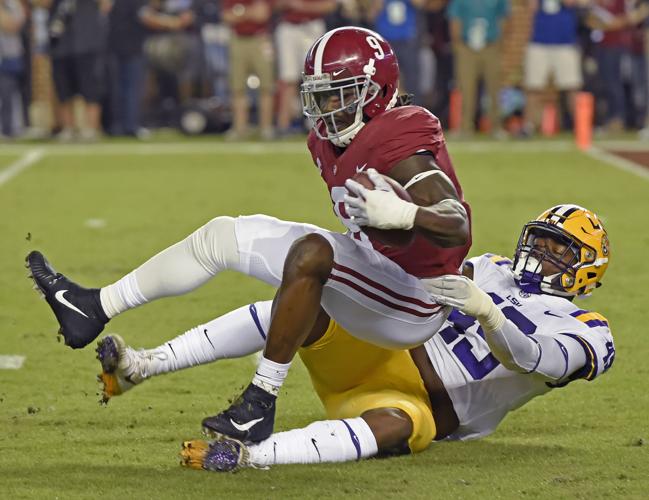 LSU linebacker Arden Key (49) makes the stop on Alabama running back Bo Scarbrough (9) for a loss during the first half of LSU's football game against Alabama at Bryant-Denny Stadium Saturday Nov. 4, 2017, in Tuscaloosa, Ala.. Bama won 24-10. 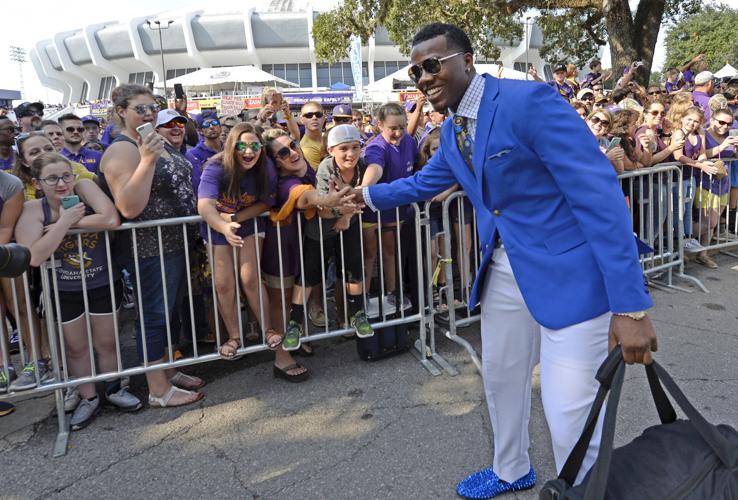 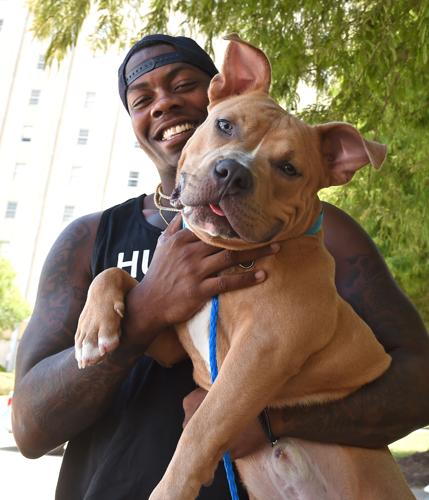 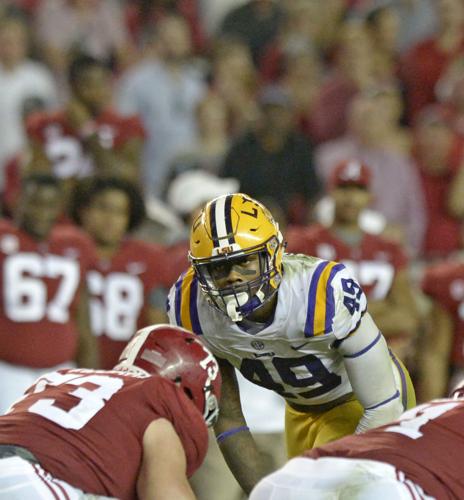 LSU linebacker Arden Key (49) sets his sights on Alabama quarterback Jalen Hurts (2) in the second half, Saturday, November 4, 2017, at The University of Alabama's Bryant-Denny Stadium in Tuscaloosa, Ala. Alabama won 24-10.

LSU linebacker Arden Key (49) makes the stop on Alabama running back Bo Scarbrough (9) for a loss during the first half of LSU's football game against Alabama at Bryant-Denny Stadium Saturday Nov. 4, 2017, in Tuscaloosa, Ala.. Bama won 24-10.

LSU linebacker Arden Key (49) sets his sights on Alabama quarterback Jalen Hurts (2) in the second half, Saturday, November 4, 2017, at The University of Alabama's Bryant-Denny Stadium in Tuscaloosa, Ala. Alabama won 24-10.

INDIANAPOLIS — Arden Key has spent his long weekend at the NFL scouting combine opening up to NFL general managers and coaches about the circumstances that led to him leaving the LSU football program last spring.

But Key remains unwilling to shed any light on the subject to the public.

Key, who was available to the media for an open interview Saturday for the first time since the Citrus Bowl in December 2016, said teams have been "blown away" by the revelation of his reasons for leaving LSU, but he declined to comment when asked multiple times to reveal details about his leave of absence.

NFL teams are renowned for the information they gather on prospects, and Key's father advised his son to make sure coaches and general managers found out about the leave of absence from him, rather than somebody else during the process.

“I told him to be truthful and let them know he made a mistake,” Arden Key Sr. said this week. “He’s a person that, like any other kid entering the draft, he’s proven he’s a high-character guy who’s made a few mistakes along the way. That’s the phase he went through, and he learned from it. He’s put that behind him."

That is the fact Key sought treatment last spring for an off-the-field matter that no one has revealed publicly, according to multiple people involved in Key’s situation who spoke to The Advocate on condition of anonymity.

Key’s father would not specifically confirm his son’s issues, only calling them “mistakes” and expressing his “gratitude” toward LSU and coach Ed Orgeron for assisting his son through a difficult time.

For Key, the NFL scouting combine is his first chance to provide answers to questions that could cause a player once considered a top-10 talent to drop down the draft board.

NFL.com polled five pro executives asking what prospect has the most riding on combine interviews. Two of the five picked Key.

“Key really needs to explain what happened last offseason and talk about where he is now,” one of the anonymous executives told NFL.com. "He was the biggest disappointment of the 2017 season."

Concerns from NFL personnel extend beyond last spring to his injury past. His junior season was rife with “obstacles,” many of them regarding his son’s health, his father explained.

Key underwent shoulder surgery in May to repair a partially torn labrum in his rotator cuff. He broke his pinkie finger at some point in Game 3 or Game 4, playing with it bandaged for more than a month. He sprained the medial collateral ligament in one of his knees in Game 10 against Arkansas, then sat the remainder of the season, skipping LSU's Citrus Bowl appearance.

Although the on-field workouts and interviews draw the most attention in Indianapolis, the most important portion of the combine for prospects with an injury past is the medical check, when doctors from all 32 teams poke, prod and search for injury issues that might have gone undetected.

Key believes he passed those checks with flying colors.

"My shoulder surgery was the biggest injury I’ve faced in college," Key said. "That doesn’t give me any problems now."

His recovery from that procedure extended into the season, and he gained more than 30 pounds during rehabilitation, ballooning from the 240 pounds he should be carrying all the way to 280 at his heaviest.

Key's weight gain will also lead to questions from NFL teams wondering why his production dipped from 12 sacks (in 11 games) as a sophomore to four (in eight games) as a junior. Asked what led to the weight gain Saturday, Key simply responded he'd been eating too much.

“I just got overweight," Key said. "I was out of shape. I missed spring and summer, so I was trying to get in shape during the season and things of that sort.”

Injuries and a drop in production aside, the biggest concern for NFL teams is the issue that forced him to leave the team in January 2017.

Key sought treatment during a four-month span. At the time, the university announced his temporary leave for “personal reasons.” He spent that time enrolled in online courses at the university.

His father attributed his son’s issues to “influences” surrounding him and his overwhelming success as a sophomore in 2016.

Key set the school single-season record by racking up 12 sacks that year and rose in the 2018 NFL draft projections, touted by many as a surefire top 10 pick. He also landed on several prestigious preseason watch lists in July.

“This was all new to him. It was a big stage,” Arden Key Sr. said. “He’s now learning how to trust people and how not to trust people and find good character people to put around him. In college, you’re around the same guys, and a lot of guys are struggling with the same thing."

According to some projections, he has tumbled from the top of the first round into the draft's second day. Matt Miller, a draft analyst for Bleacher Report, describes predicting Key’s draft selection as “impossible” because of the “question marks” swirling about the Georgia native, and opinions on Key's place in this draft class vary among experts.

Miller has Key, for now, as the 32nd pick — the final selection in the first round. The NFL Network's Mike Mayock rates Key as the third-best edge rusher in a class that most experts believe isn't very deep. (In a SportsIllustrated.com story, Mayock said, "Gifted, but he has off-the-field concerns ... hurt his knee, had a back issue. Who is Arden Key?")

“Those interviews and the drug test are the most important for him,” Miller said. “You've got to pass that test, and then you have to interview well.”

A short interview alone, even with surprising revelations, likely will not be enough to answer a team's questions about Key's past. Extended meetings with teams will come later in the draft process. NFL teams are allowed to host 30 players on visits, and those visits are often reserved for players with off-the-field questions to answer.

Bringing a player to a team's facility allows the team to dig deeply into a player's past.

“NFL teams aren’t going to feel comfortable until they get answers on that (off-field) stuff,” an NFL scout told The Advocate. “You don’t want to close the door on impact players, but teams are going to do their due diligence."

Key, who spent the past six weeks training in Phoenix, will also have questions to answer from the physical portions of the combine.

“He feels like he’s back to himself again,” said Arden Key Sr., who speaks to his son each Sunday.

The problem is, Key's natural self is lighter than the prototype for NFL pass rushers. Key told reporters Saturday that his ideal weight is between 240 and 250 pounds, which is generally considered undersized for a pass rusher, either as a defensive end in the 4-3 or an outside linebacker in a 3-4.

And make no mistake, Key sees himself as a pass rusher first and foremost, downplaying any questions about his abilities if a team asks him to drop back in coverage.

Key also decided not to run the 40-yard dash, electing to wait until he returns to Baton Rouge for LSU's pro day April 4. Key said the decision to hold off on the 40 was based on a lack of time to prepare.

"When I first got to EXOS (his training facility), they were training on the 40. I was trying to get my body healed up and take care of the nicks and bruises," Key said. "I know how much technique is involved in the 40, so I said, nah, I’m just going to wait until pro day."

Key's departure from LSU was somewhat abrupt. About three days after the regular-season finale over Texas A&M, Key informed Orgeron of his intention to skip LSU’s bowl game and begin training for the draft. That was about a month before he publicly announced the decision to go pro.

Fans chided Key for giving up on the program, and some around the team were miffed that he left the way he did. He was not around for football activities in December, Orgeron said then during a news conference.

“That’s the thing about it — I felt like the fans felt in terms of, you’re pulling apart and transitioning to another level. You kind of have that feeling of ‘I don’t want to let it go,’ ” Arden Key Sr. said.

Key refrained from doing any interviews to explain himself during last season, a decision that kept his voice out of the discussion surrounding his absences, his injuries and his decision to leave the team.

“I wasn’t ready," Key said. "I was still dealing with my adversity I went through, and then I wasn’t playing up to par, so I decided not to speak to the media.”

Key said he believes he's a different person than the way he's been portrayed, a belief he has worked hard to impress on the NFL coaches and general managers interviewing him this week.

Key believes the backlash was just another hurdle to overcome.

"I went through adversity," Key said. "Yes, I did make mistakes, bad decisions, but I’m past that. I’m the best pass rusher in the class. I can rush the passer, I can run-stop. I’m coachable, a people’s person, a loving, caring guy."

Where Key gets drafted will likely depend on his ability to convince teams he's put his issues behind him.