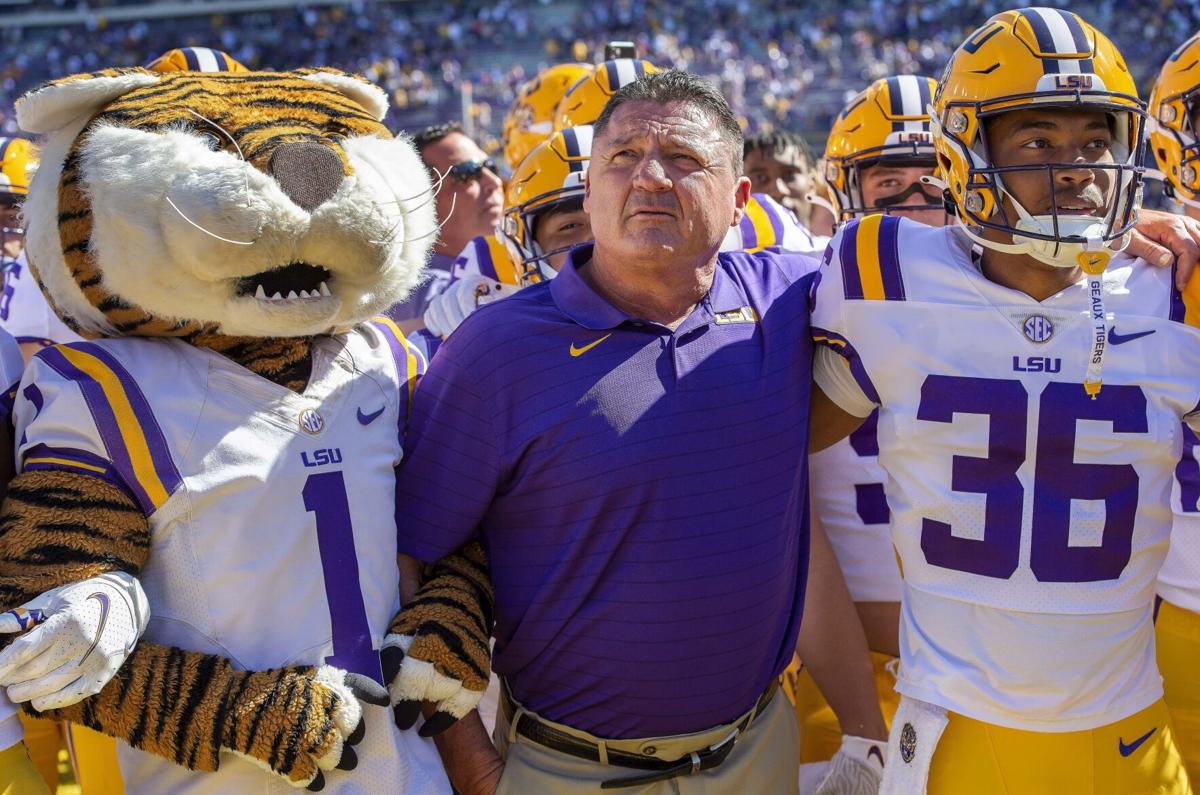 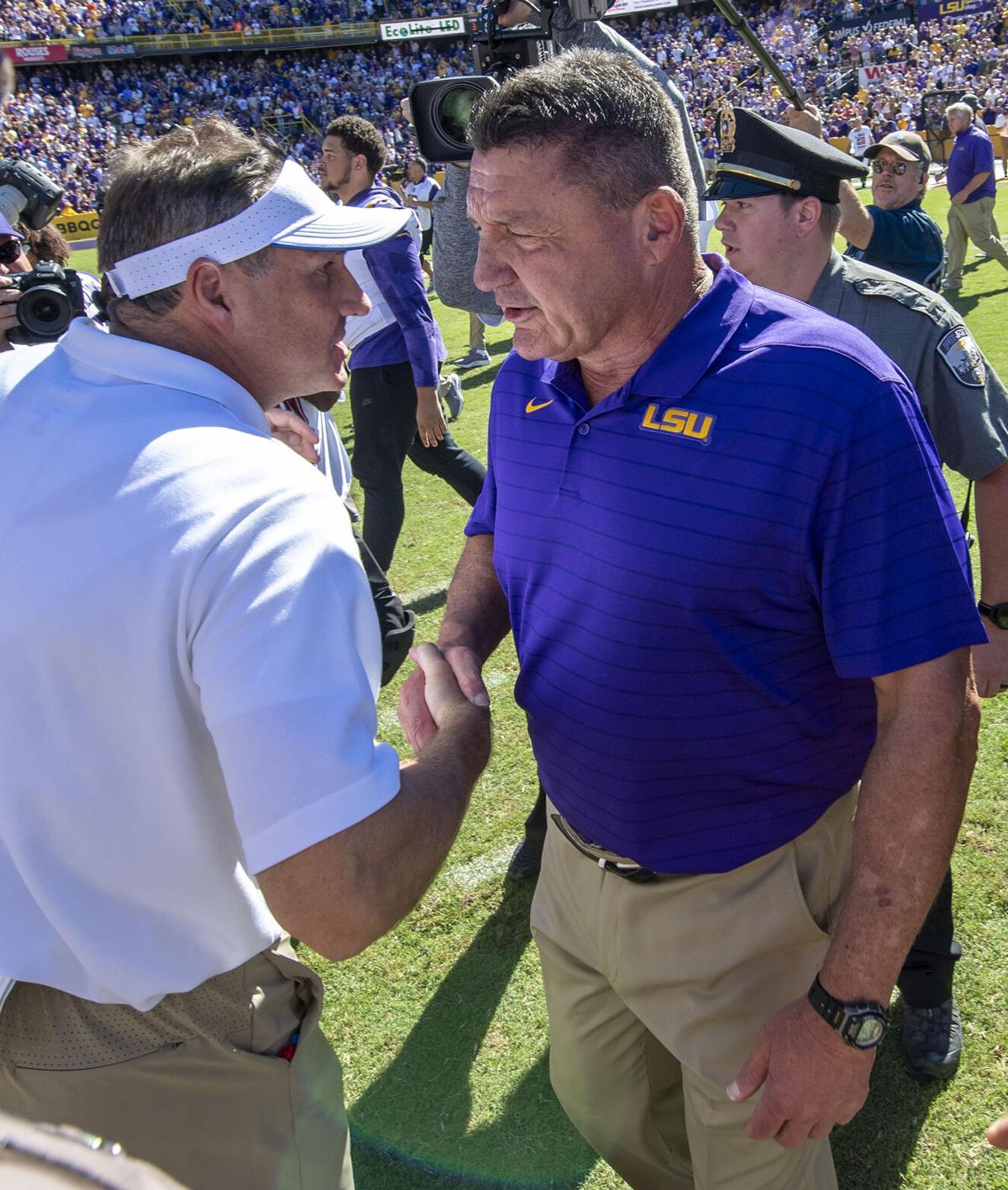 As his players ran about with youthful delight, Ed Orgeron huddled, heads bowed, with Florida coach Dan Mullen near midfield.

Then he walked purposefully, almost somberly, toward the north end zone where his team giddily gathered in front of the Tiger Stadium student section. He picked his way through the madding crowd and sang the alma mater. Like they do after every LSU win.

Like they did seemingly always in the good old days.

Orgeron’s future as LSU’s coach was supposed to be a finite resource. A fait accompli. Then came Saturday, when Orgeron did a fais do-do around both his withering detractors and the Gators, standing with his team in the bright sunshine of a gorgeous Louisiana October afternoon after a totally wild, completely improbable 49-42 victory.

For the moment, the doubts vanished. The program’s shortcomings were trumped by a pounding, record-breaking performance from tailback Tyrion Davis-Price. And the dark clouds of doubt sewn by losses to UCLA, Auburn and Kentucky exuberantly were pushed aside.

It isn’t about him, Orgeron always has been fond of saying, though everywhere you went last week the questions were about him. His future. And, yes, his potential successor.

All that noise was drowned out as the LSU band played the song that ends with “forever LSU.” If we all, fans and media alike, are going to give Orgeron and the Tigers the devil, also give them their due after a win like this.

“It’s about the team,” Orgeron said. “I won’t blink until the day I die. That’s not happening. But we told the team, our backs are to the wall. Let’s fight and let’s see what happens.”

Did the victory, stunning and improbable as it was, change or ultimately extend the length of Orgeron’s tenure with the Tigers? It’s difficult to say it did with all the difficult games still to come on LSU’s schedule, though Ole Miss’ defense is a rumor, Texas A&M may be a one-trick pony and Arkansas looks like it’s turning into a pumpkin the closer we get to Halloween. ULM still looks like a sure win and Alabama, which got a huge scare before winning 31-29 at Florida a month ago, still looks like a sure loss.

But this was one Saturday that reminded us what we love about college football, despite its excesses and vanities and eternally dissatisfying methods of picking a national champion. For all the confident predictions of success or failure, it is still a highly unpredictable game. Forecasts of LSU’s demise, and by association those of its coach, that seemed as easy to plot as a sail across a still pond suddenly took a 90-degree detour.

The expectations that Orgeron’s ouster might come after the previous Saturday’s dismal 42-21 loss at Kentucky, or after a loss to Florida that never came, or during the open date between next Saturday’s game at Ole Miss and LSU’s Nov. 6 game at Alabama, resemble guesswork now. The increasing likelihood is that the whispers and assertions are true, that Orgeron and LSU will finish the season together, and that only then will a decision come down from athletic director Scott Woodward’s sixth-floor office in the athletic administration building.

Maybe that is what the plan should have been characterized as all along. It certainly is more dignified for a man who has had his undignified “sissy blue shirt” moments, but also deserves credit for steering the Tigers to their most recent national championship and dragging their offense into the 21st century.

The guy certainly knows how to pick himself and his team up off the deck. Seldom if ever in recent memory had LSU football seem so forlorn, so pitiful, than after last week’s lopsided loss at SEC non-football power Kentucky. And key player after key player kept melting off the depth chart like marshmallows over a campfire. The Tigers probably had fewer than 60 scholarship players able-bodied enough to take on the Gators on Saturday.

But like it did on a foggy, flying shoe-filled night in Gainesville last December, LSU turned the tables on Florida. The team that dominated this series in the Steve Spurrier era now has lost nine of its last 12 to LSU.

The Tigers needed turnovers. They got four interceptions, one of them a 37-yard pick six by Dwight McGlothern to restore LSU’s momentum early in the third quarter after ending the first half on the botched defense of a 42-yard Hail Mary from Emory Jones to Justin Shorter.

The ESPN GameDay crew has been critical of LSU coach Ed Orgeron and his team throughout the 2021 season, and Kirk Herbstreit again chimed in w…

The Tigers needed a running game. What started with a respectable stream at Kentucky thanks to a 147-yard effort by Davis-Price became a torrent against the nation’s 26th-ranked rushing defense, as he put LSU’s offense on his back and carried the ball 36 times for a school-record 287 yards.

Yes, there were mistakes and lots of yards passing (350) given up to a Florida team expected to roll over LSU with its run game. The mistakes were the kind that bad teams make, like the botched Hail Mary coverage or Raydarious Jones’ taunting penalty that helped keep a third-quarter Gators' scoring drive alive.

But LSU had an answer for every Florida score, every counterattack, every slippery trick Mullen tried to pull as he pingponged between Jones and Anthony Richardson at quarterback. It was just enough, but enough nonetheless.

A ways before his job and LSU's season have reached a final destination.

Freshman running back Armoni Goodwin and freshman wide receiver Deion Smith were unavailable against Florida after not practicing this week.