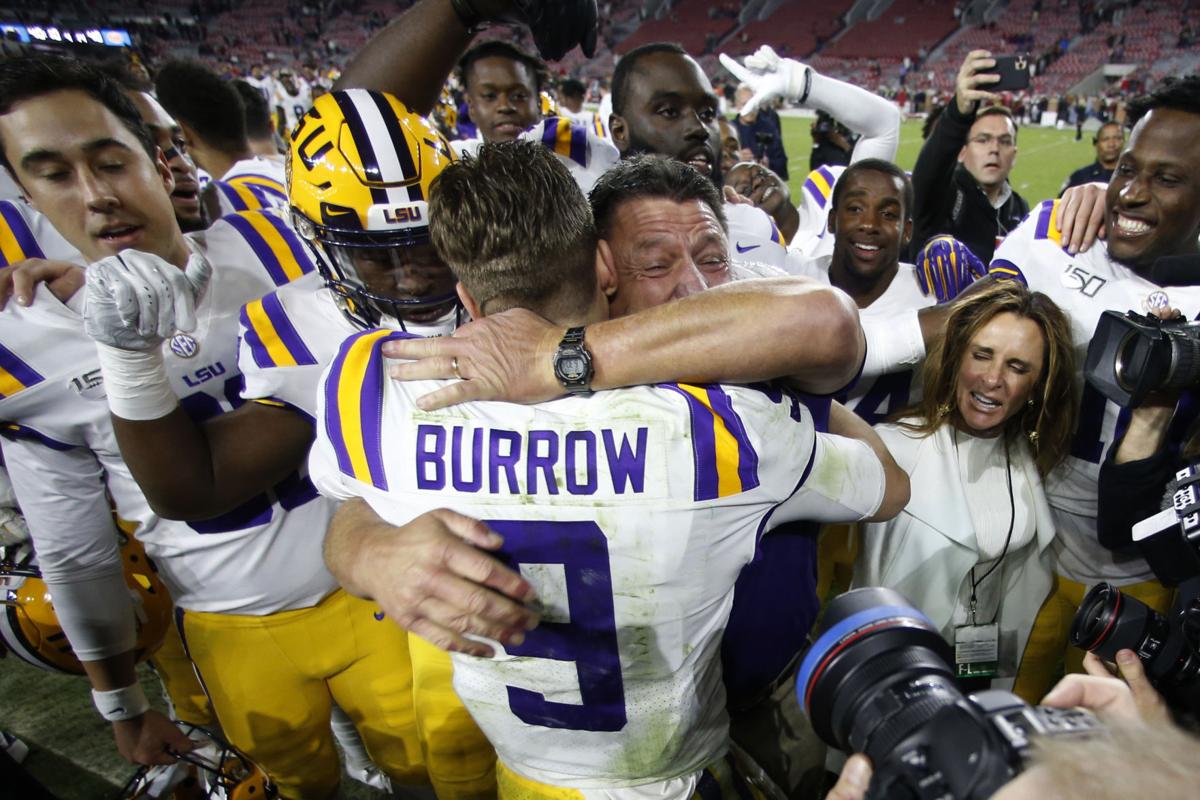 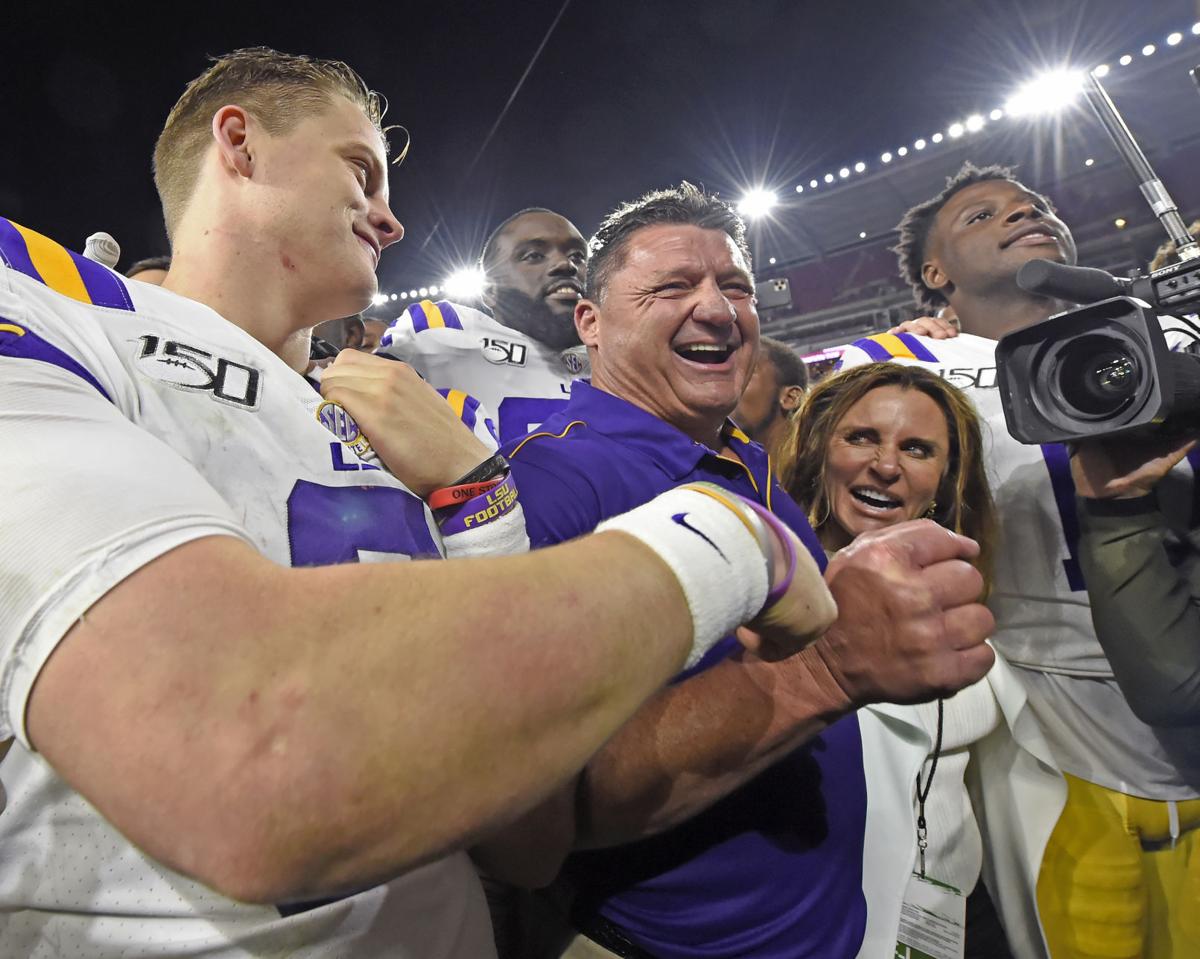 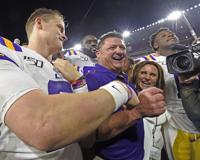 A jubilant LSU quarterback Joe Burrow (9) and coach Ed Orgeron knock knuckles before singing the alma mater after LSU's game against Alabama at Bryant-Denny Stadium on Saturday Nov. 9, 2019, in Tuscaloosa, Ala. LSU won 46-41.

A jubilant LSU quarterback Joe Burrow (9) and coach Ed Orgeron knock knuckles before singing the alma mater after LSU's game against Alabama at Bryant-Denny Stadium on Saturday Nov. 9, 2019, in Tuscaloosa, Ala. LSU won 46-41.

They strutted into the end zone last Saturday night, four LSU players with a message for the recruits who sat inside Bryant-Denny Stadium. They wanted the prospects to understand what had just happened, that LSU had beaten Alabama for the first time in eight years and taken control of the Southeastern Conference this season.

“Y'all need to rethink where y'all going,” junior tight end Thaddeus Moss said.

The four players — junior safety Grant Delpit, freshman safety Marcel Brooks, junior safety Cameron Lewis and Moss — bounced in front of the stands. They pointed at the recruits. They nodded their heads. They said come to LSU.

The players gave their pitch for about 20 seconds, then they jogged toward their teammates. Alabama hadn’t left the field.

The Tigers’ 46-41 win pushed them to the top spot in the College Football Playoff ranking for the first time in school history. It snapped their losing streak to the Crimson Tide. It put them two wins from a spot in the SEC Championship before they play Ole Miss this weekend. It also boosted LSU in recruiting, the lifeblood of a successful college program.

“We're going to have the best players coming to LSU,” coach Ed Orgeron said. “Guys are coming more and more to watch us play and like what they see. It's been a great response on the phone.”

Every Sunday and Monday night, LSU’s coaches gather for power hour, a session in which they contact recruits. NCAA rules allow one phone call per week to members of the 2020 class and text messages to 2021 prospects. The coaching staff — except for coordinators, Orgeron said — gather together. They talk to players, trying to persuade them to pick LSU. Energy buzzes within the room. Orgeron sometimes uses FaceTime to show prospects Tiger Stadium, the practice fields and his office. After LSU beat Alabama, Orgeron described power hour as “phenomenal.”

“We came in and did our thing,” junior linebacker Jacob Phillips said. “Hopefully, we'll be top of the food chart of getting top recruits.”

Throughout the season, Orgeron has said prospects have contacted LSU as they watched the Tigers win four top-20 games. The recruits, Orgeron said, have noticed LSU’s offensive production and success, allowing the coaches to reach top players throughout the country. Scoring 46.7 points per game with the Heisman front-runner at quarterback, the Tigers have created a destination for skill position players.

LSU vs. Ole Miss: Who ya got? Advocate experts make their picks, predict score

The Advocate's LSU beat team predicts the outcome of the Tigers' matchup with Ole Miss on Saturday night in Oxford.

With about one month until the early signing period begins on Dec. 18, LSU has 25 commitments in its upcoming class, meeting the maximum number it can sign. The Tigers’ class ranks No. 2 in the country, though the personnel may change before signing day. Clemson, which has five fewer commitments, holds the top spot. Alabama ranks No. 3.

Orgeron has prioritized keeping top talent within the state, and eight players in the current class come from Louisiana. The Tigers have commitments from half of the state’s top-10 highest-rated players. But without a five-star rated player in Louisiana this cycle, the Tigers have recruited throughout the country, gaining their three five-star players from Georgia, Florida and Washington.

“We want to recruit nationally,” said Orgeron, adding his belief the best players want to come to the SEC. “Now, with the offense that we have, we have a lot of recruits that want to be a part of us.”

How does LSU beat Ole Miss? Keys to the game include passing offenses, third down

Coming off its biggest win of the season, No. 1 LSU will play Ole Miss on Saturday night inside Vaught-Hemingway Stadium. These are staff writer Wilson Alexander's keys to the game for LSU.

LSU’s win over Alabama made the Tigers a national championship contender and the possible No. 1 seed in the playoffs. It killed the perception the Tigers cannot beat Alabama, and it gave LSU momentum as Orgeron tries to finish a top-ranked recruiting class.

“I think, maybe, we've probably lost a couple key recruits because we haven't beat them,” senior defensive lineman Rashard Lawrence said. “It won't be guys going to Alabama. It'll be guys coming to LSU. It's really big for the program. Anytime you can beat a team that's as great as they are, it does wonders.”

Last Sunday morning, as LSU continued to celebrate its win, Jacobian Guillory announced his college choice. Recruiting sites considered Guillory, a four-star defensive tackle from Alexandria, the highest-rated uncommitted player in Louisiana. He had narrowed his recruitment to two schools: LSU and Alabama. He picked LSU.

Rashard Lawrence celebrated season-best game vs. Alabama with his mom: 'She means the world to me'