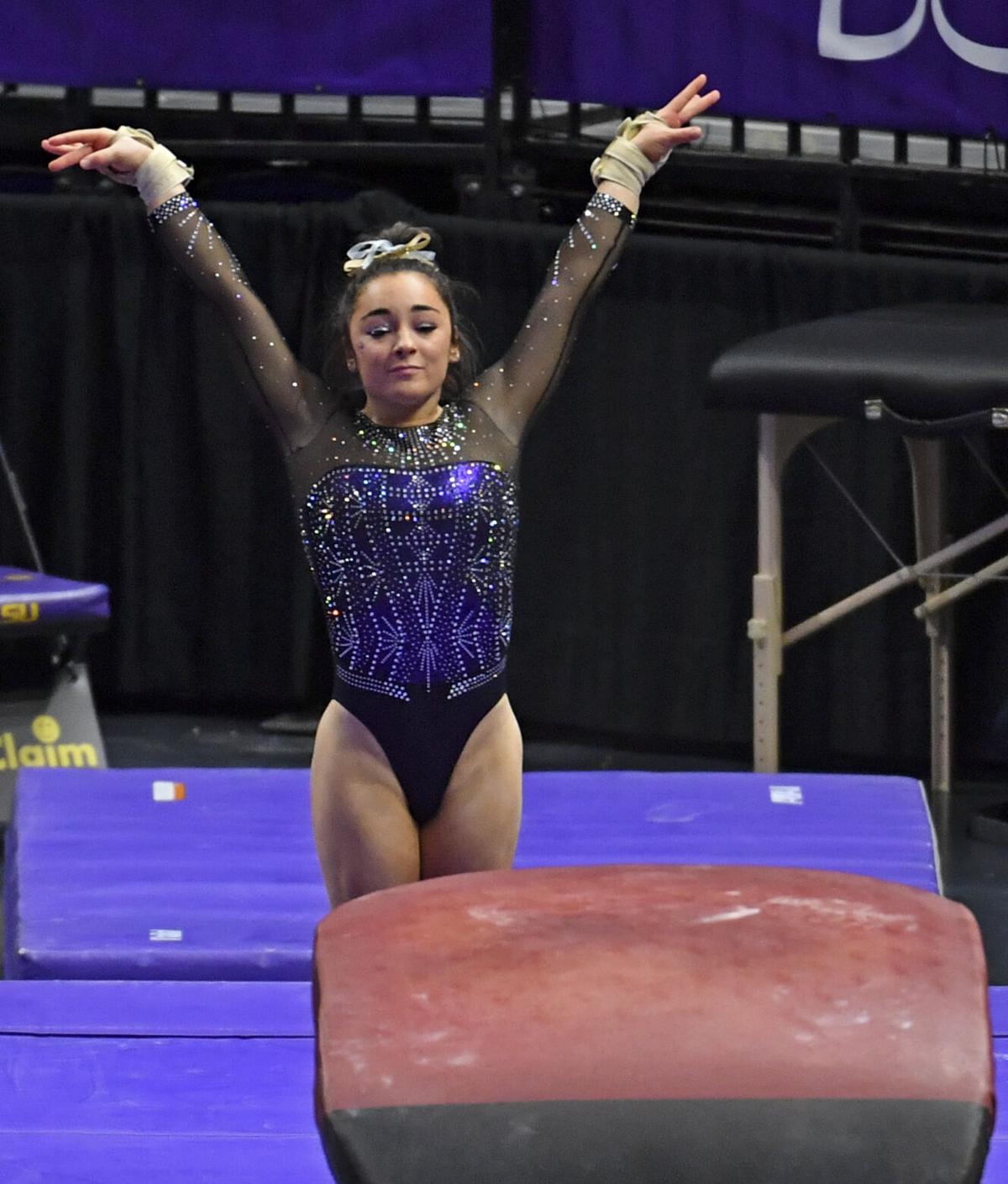 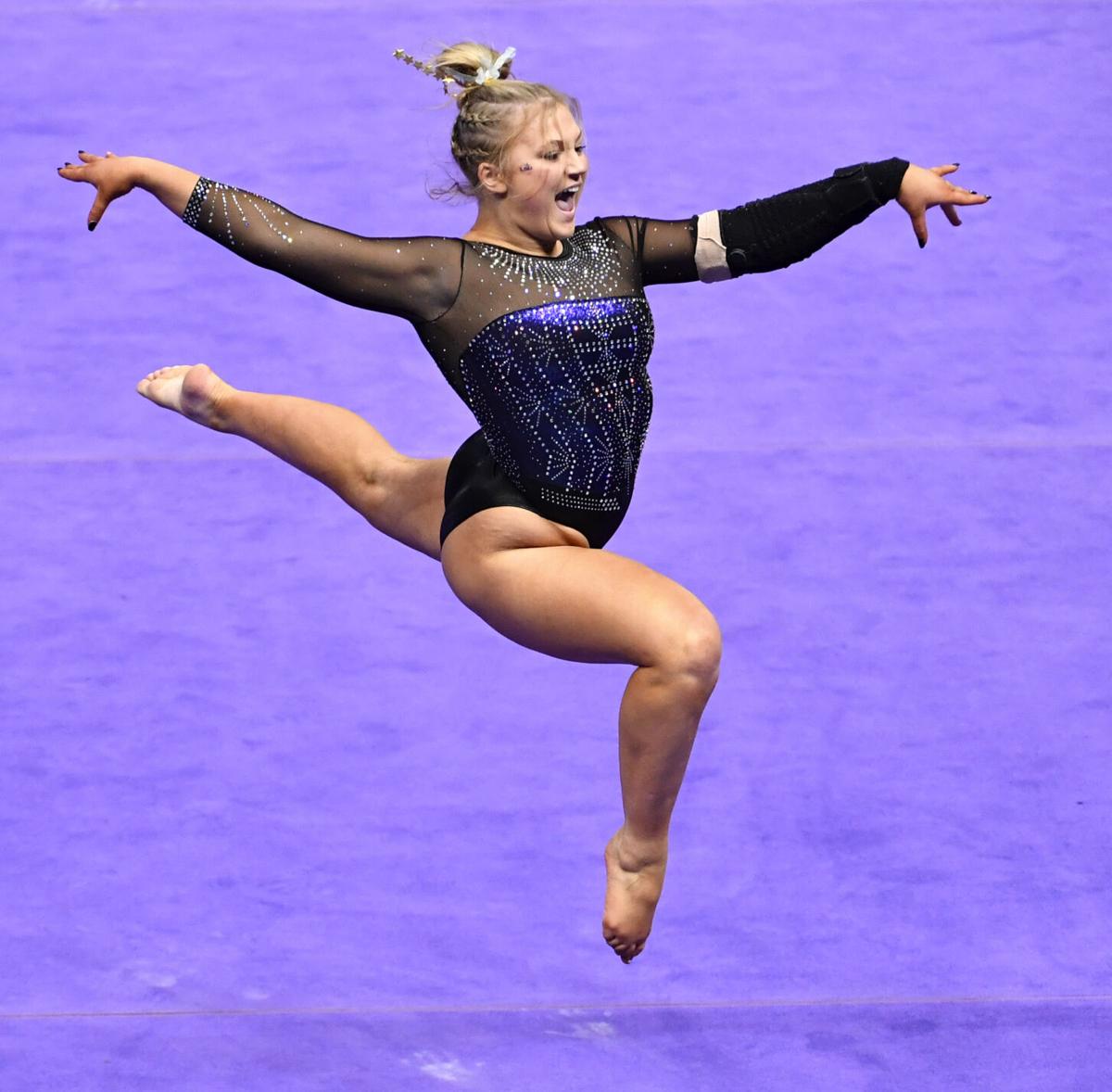 There are just 49 Division I women’s programs competing this season. Coaches know one another and their staffs well, as they compete for the same finite pool of top-level recruits.

In some cases, though, the family circle is drawn even tighter. That’s the way it is at LSU with two of its freshmen gymnasts, Elena Arenas and Sierra Ballard.

Ballard is truly family to LSU coach Jay Clark. Ballard’s dad, Steven, is the brother of Clark’s wife, Julie. And both Julie Ballard and Sierra’s mom, Lori Strong-Ballard, were recruited by Clark to compete for Georgia when he was an assistant coach there.

Arenas is practically family, too. Her mom, Kim Arnold Arenas, was also recruited by Clark to Georgia, where she became one of the program’s all-time greats. And Elena’s father, Pete, played baseball for the Bulldogs.

When the time came for Elena and Sierra to choose schools, Clark wanted both of them to pick LSU. But he didn’t want to rely on the family and family friend angle too strongly.

“I really made a conscious effort not to play that card,” said Clark, who leads No. 2-ranked LSU into a meet at Friday at No. 6 Alabama (7:30 p.m., SECNetwork+). “I don’t think that’s fair to the kids. That would have put undue pressure on them. I wanted them to enjoy their recruiting.

A great score and disaster for LSU gymnastics: a final fall leads to a loss to Florida

The LSU gymnastics team had victory over No. 1-ranked Florida in its hands … or, more to the point, in its feet.

“In the back of my mind I thought they would go to Georgia, because that’s where their parents went. Not only the moms, but both dads went to Georgia. I wasn’t sure I wanted to tug at the heartstrings if their hearts were somewhere else.”

So Clark downshifted their recruitments, tried hard to just be Coach Clark instead of Uncle Jay. And both Arenas and Ballard wound up with the Tigers.

For Arenas, it was a desire to write her own story.

“Of course, my parents kind of wanted me to go to Georgia, to continue their legacy,” she said. “But when they visited with me on (LSU’s) campus they understood and agreed it would be a good fit for me. They let me follow my heart, so here I am now.”

In an ironic sort of way, it was the family atmosphere of the LSU program — and not actual family — that shaped her decision.

“My parents definitely have a huge love for Georgia,” Ballard said. “I do, too. The campus is gorgeous. It’s a very nice school. But the LSU gymnastics facilities and program were the best fit for me. It’s the way they’re focused on family and tradition, and the love the teammates have for one another.”

Though her mom was the gymnastics phenom in the Arenas family — Kim was a two-time winner of the Honda Award — it was dad Pete that most helped shape Elena’s gymnastics form at the family’s Watkinsville, Georgia, gym club, Georgia Elite. It’s the same club that was the launching pad for LSU senior Sami Durante.

“When I started it was more my mom,” Arenas said, “but when I got to higher levels my dad started to step in. We went to national team camps together. We grew together and both learned a lot.

“But mom set the base for where I was. I want to be like mom. She’s my idol.”

Lori Strong-Ballard was a two-time Canadian Olympian, competing in the 1988 Seoul and 1992 Barcelona Games. The Whitby, Ontario, native then came south for college with Clark’s recruitment, where she met Steven. She’s now a gymnastics commentator on SEC broadcasts and may be in line to call LSU’s regular-season and home finale in March against Missouri.

“My mom was my coach once we actually figured out I was serious,” Ballard said. “She said, ‘I’m going to step in and we’re going to do this right.’ Aunt Julie also coached me a couple of times at our gym (Northshore Gymnastics). That was fun to get a new perspective from her.”

Both Arenas and Ballard have become regular fixtures in the LSU lineup. Arenas has competed in every meet this season, recording a career high 9.90 at Auburn on floor. Ballard has competed on floor the past two meets, turning in a 9.925 this past Friday against Florida.

“They’re both very talented athletes,” Clark said. “Elena is probably the more well-known because she was an elite national team member. But they both have incredible strengths.

“Elena is such a tenacious competitor. She wants to work more than we can work in 20 hours a week. She never slows down. Her work ethic is second to none.

“Sierra has a wealth of talent and ability. Her elbow prevents her from doing bars right now and we may have to get (surgery) in the offseason. She’s powerful and loves to perform. You watch her on floor, and her routine oozes enthusiasm. She’s very much a showperson when she’s out there.”

Both teams are coming off disappointing results despite what were good scores. LSU had victory over No. 1 Florida in its grasp, but a fall on the final floor pass by anchor Haleigh Bryant allowed the Gators to escape with a 198.150-198.050 win. It’s the only meet this season where both teams had a plus-198 score. Alabama had a solid score at home against Georgia but lost 197.275-197.000.

Photos: No.2 LSU drops heartbreaker to No. 1 Florida Friday night