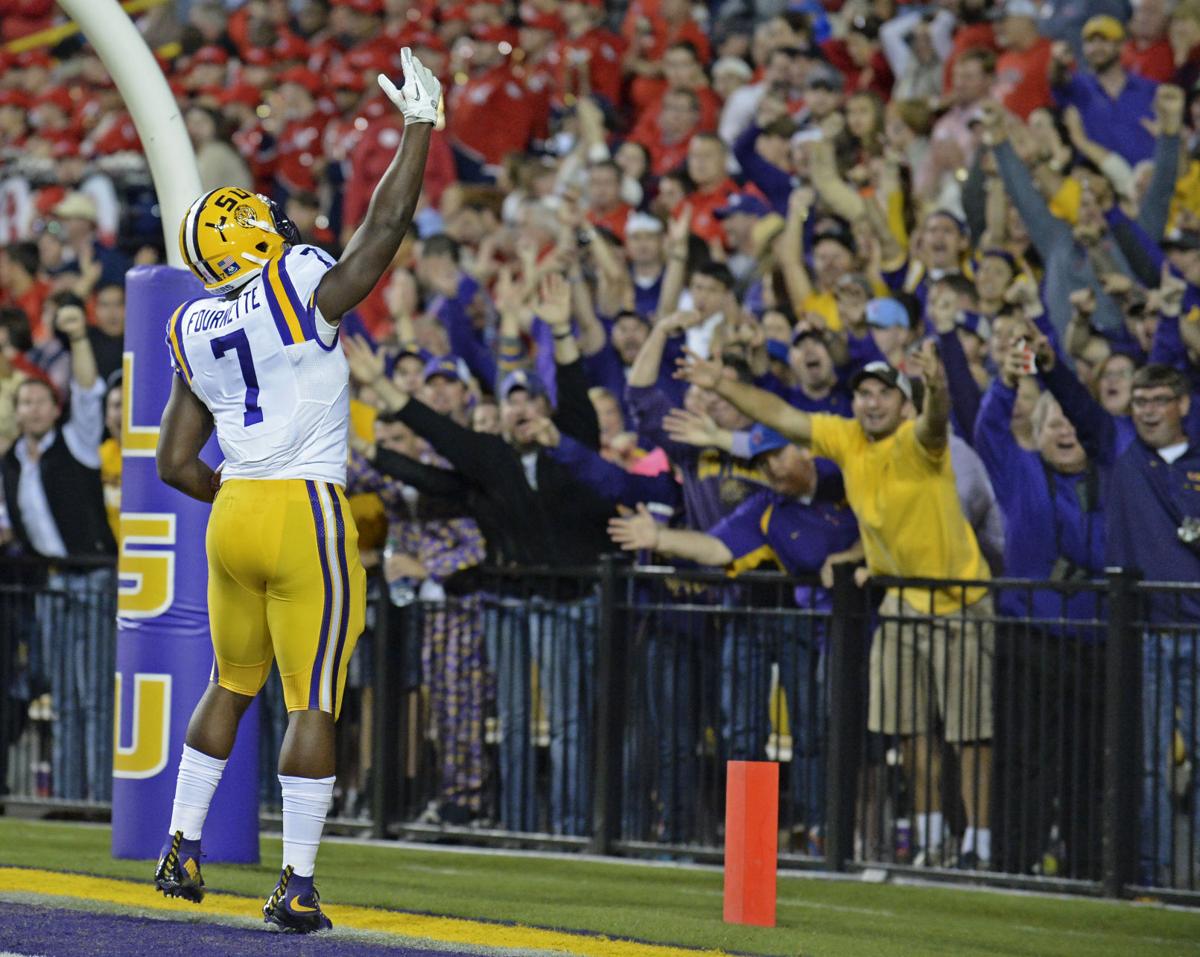 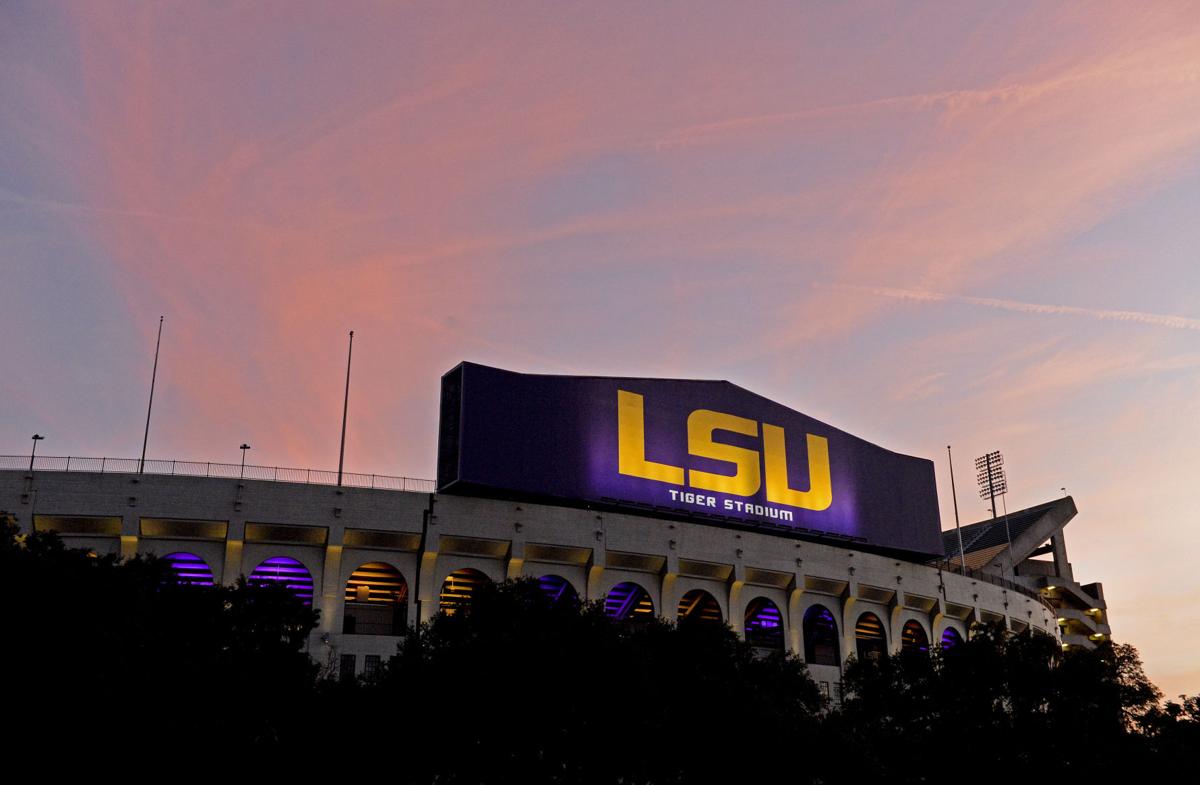 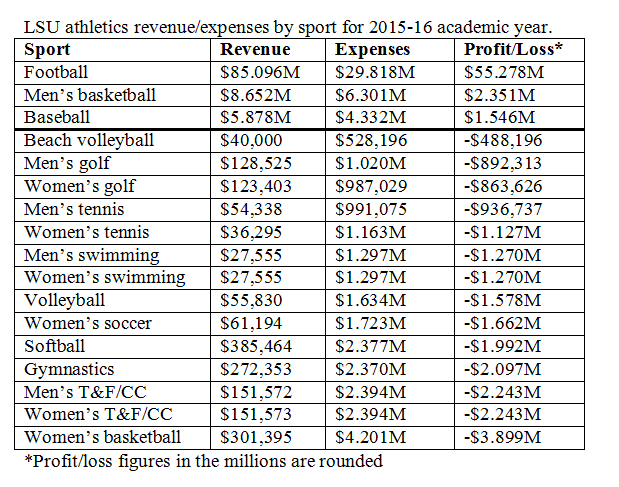 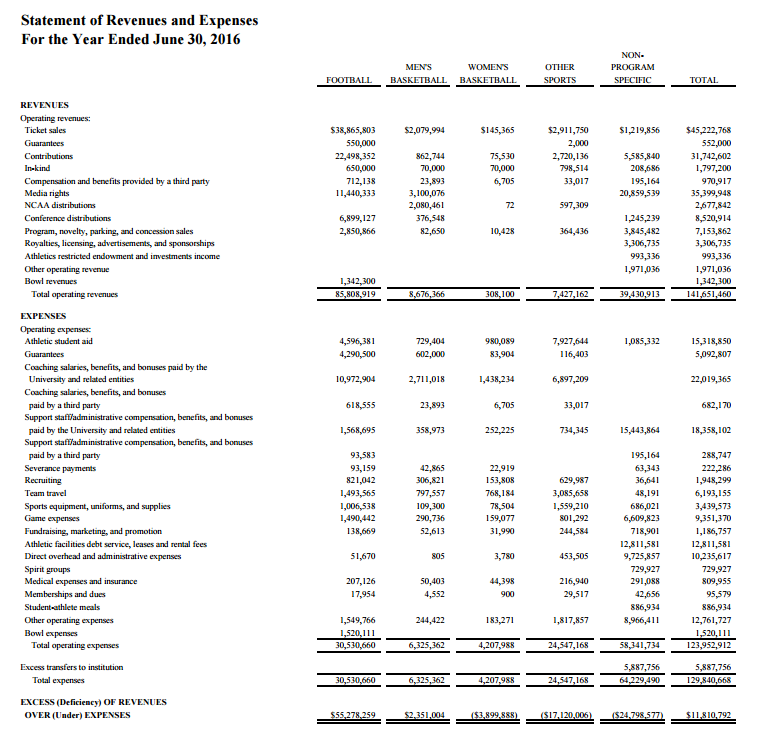 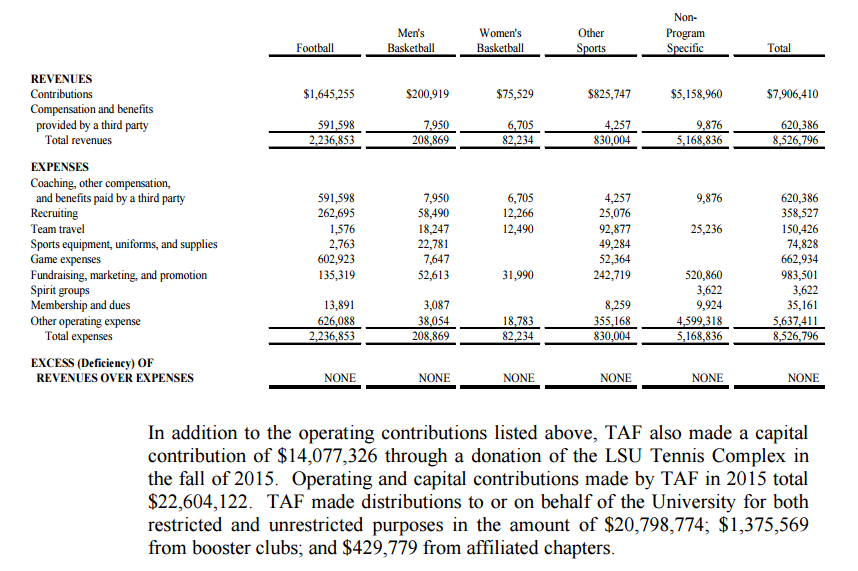 TAF contributions for calendar year 2015, according to a year audit of the athletic department performed last spring.

Tigers football made $85 million in the 2015-16 academic year, turning a profit of more than $55 million. That’s according to two documents obtained by The Advocate: an audit of the athletic department released by the Louisiana Legislative Auditor and an NCAA financial report the school released.

The Tigers Athletic Foundation, a nonprofit corporation supporting LSU athletics, contributed more than $8 million to the athletic department for operating expenses in 2015-16, down $6 million from 2014-15. However, TAF gave another $14 million for LSU’s new tennis complex.

In all, the fundraising arm for LSU sports donated more than $22 million to the program last academic year, and Nike gave another $1.6 million. TAF does not normally reveal its financial details, but they were released in the audit.

The audit was carried out by an independent certified public accounting firm last spring and is performed each year to evaluate the athletic department. There were no findings from the audit. As for the second document, the school annually completes a full financial report to the NCAA.

Brothers on the bayou: Ed Orgeron, Bobby Hebert and South Lafourche's wild ride to the state football title in 1977

LAROSE — They sewed up Bébé at halftime.

That is normal for most major college athletic departments. In fact, LSU is one of few institutions that profits off baseball.

Men’s basketball made $406,000 more in ticket sales last season as it did in 2014-15, a 24 percent increase that's likely a result of the highly anticipated 2015-16 season with star Ben Simmons. The team did not make the NCAA tournament.

In football, LSU made $3 million more in tickets sales during the 2015 season as it did 2014 because of two games, the audit says: the canceled McNeese State season opener and the relocated South Carolina game.

The school refunded a "majority" of the tickets sold for the McNeese game, but it recorded $2.5 million for loss of game insurance revenue. The Gamecocks-Tigers game was moved to Baton Rouge from Columbia, South Carolina, because of widespread flooding in the Palmetto State. LSU recorded $2.5 million in ticket sales for that game. The school paid USC a guarantee of $1.8 million, as it was USC home game.

Tyler Taylor knows Dave Aranda is serious about him playing early as a freshman.

LSU baseball pulled in the most money from ticket sales of any sport at the school not named football. The program made $2.59 million on tickets sold.

Other notes from the audit or/and NCAA financial report:

By the dozens they came to the Pete Maravich Assembly Center on Tuesday night, the curious, the bored, the people who always slow down and gaw…

Has LSU lost control of recruits in north Louisiana? Answers might surprise you

Picture it: Three football prospects, all from the same high school, are sitting on the lobby steps inside LSU’s football operations building.